>The Wooden Boat Show, Mystic and off to Cuttyhunk Island

Last weekend my son Christopher visited me in Mystic for a weekend aboard Pandora.  Our plan was to head over to Shelter Island for a rendezvous with other SAGA 43 owners.  While just over 50 of these boats were made, we were able to assemble 5 of them for an evening of fun over drinks in Pandora’s cockpit.   As is so often the case when you want to sail, there just wasn’t enough wind so we motored much of the 25 miles there and back.

However, prior to leaving for Shelter, we took in the Wooden Boat Show at Mystic Seaport, a show that you just don’t want to miss if you love boats, wood or otherwise.   The display of big and little boats, all wonderful and VARNISHED like you’d hate if you had to do it yourself. 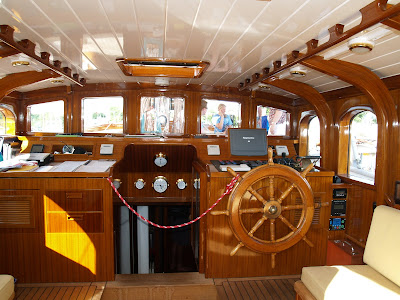 How would like to be responsible for all this varnish?  You’d need a crew with brushes just to keep up.  Yikes!!!  But wait, they do have a crew.  Of course, if you have someone delivering your G&Ts you probably don’t have to put on a painter’s hat anyway.  In this case, I am thinking “another Pims Jeeves, and be snappy about it”.

As I write this I could certainly see this as an appealing option and it as a cold one would fit right in about now as we sail along about 5 miles north of Block Island headed to Martha’s Vineyard.  The wind is on the Port quarter and we are moving along at a stately 5.5kts.   The sun is shining, there’s  fair wind.  How idyllic… 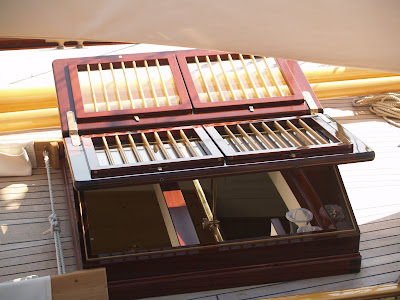 Well, back to last weekend’s boat show.  Here’s a perfect hatch aboard Spartan a recently rebuilt NY 50.  It’s just back in the water after a 4 year rebuild.  Everything about this boat is perfect.   Acres of teak decks and a crew of 6.  When we were standing there there was a swarm of able bodies using chamois (plural?) to dry off every speck of water lest it leave a water mark.  Heaven’s no…not a water spot!  Spartan is the only one of her kind left of a fleet of 9 launched in 1915 for members of the New York Yacht Club.  This link is to a site from a boatyard that had acquired Spartan as old hulk that was soliciting someone to rebuild her.  The photos of her under sail are something to behold.  This is indeed a yacht.  Interestingly, she is really a day sailor and not equipped for ocean sailing.  That makes her one massive day sailor at 72′ overall. 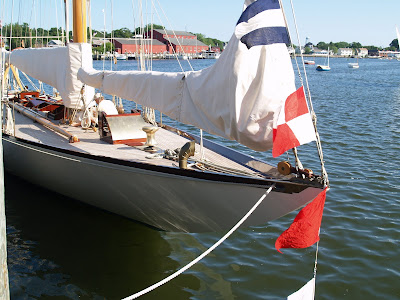 I defy you to find a finer, sweeter bow on any boat than this shot of Spartan. 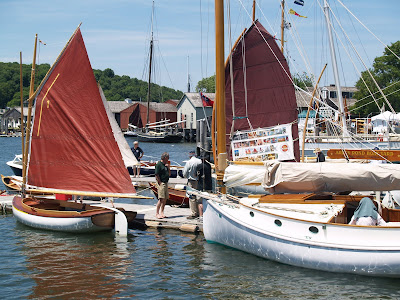 It’s not all about big and expensive. Here are a dock load of wonderful small boats.  There were literally hundreds of boats at the show built and maintained by amateurs.   However, you have to love varnish and working on boats to own one of these babies. 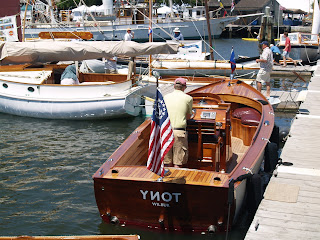 A wonderful runabout, YNOT.  And, a great name too. 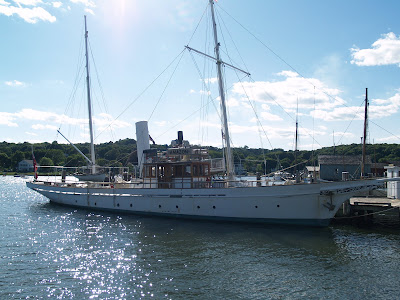 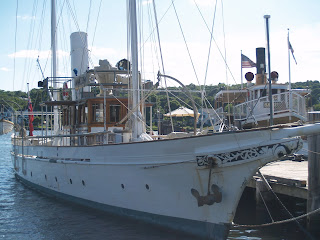 Now,  this is a real yacht.  Amazon has been visiting the seaport (check out the seaport link for her) for some time now as a guest. I spoke to the owner, from Guernsey in the UK, who told me that he had been struck by lightning.  So their visit will be extended.  The 120′ Amazon was launched in the late 1800s and was designed by Dickson Kemp.  I understand that Kemp was of the stature in the UK that Herreshoff was here in the US.   Amazon was originally a steam yacht but was converted to diesel in the 30s.  The owner told me that when steaming at 6.5 kts she only burns 1.9 gal per hour. Not bad for a boat that is 120ft overall.  She holds 800 gallons of fuel and has taken him and his family throughout the Med and now here to the States.  He won’t be going anywhere soon until he gets his electronics fixed. All were fried by the power surge of the lightening strike. 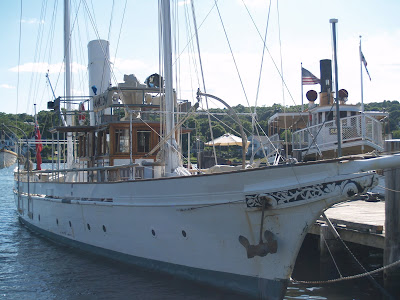 Amazon isn’t much wider than Pandora and is nearly three times her length.  No wonder she slips easily through the water.  What a wonderful boat, one of a small number that has survived from the Victorian era.

Now it’s 13:30 and the wind has freshened a bit to 14kts with 10.5 apparent and we are moving nicely at 6.5kts.  We have decided to go to Cuttyhunk which is located at the western end of the Elizabeth Islands just west of Martha’s Vineyard.  Check out the article in Power and Motor Yacht about the island.  It’s wonderful to be making time like this under sail and we should be in early enough for “opening time”.  Unfortunately, it seems that Jeeves has gone AWOL so we will have to fend for ourselves.  It’s so hard to find good help these days.  Perhaps there will be a proper yacht anchored nearby that will lend their “man” to assist.  Hmm, perhaps not.  One can always wish, can’t one?

This week when Brenda and I returned to Mystic and Pandora to head up to Martha’s Vineyard for a week aboard.  One thing that we particularly enjoy when we visit Mystic is an evening cruise aboard the Sabino, a 1908 steamboat at Mystic Seaport that runs cruises down the Mystic River to Noank and back each evenings.  Our routine, since the early 80s, is to bring a bottle of wine and jhors-d’oeuvres so we can properly enjoy teh 90 minute cruise.  Oddly, having done this for many years, alost know one else ever seems to have the same idea, so we ate alone.  Bummer for them.  It’s an idyllic way to spend time as and we sat in the bow alone and undisturbed.  Here’s Brenda holding our spot. 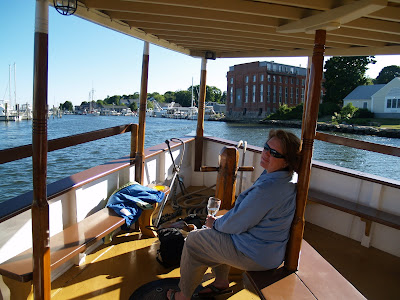 Of course, what blog post would be complete without a shot of Pandora in the evening light taken from aboard Sabino. 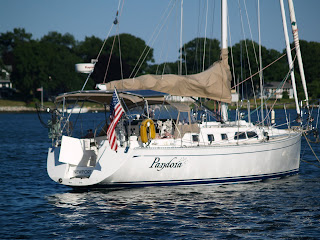