You can’t get there from here…today.

Well, here I am, back in West End Tortola.  I arrived late morning today after leaving home at 0-dark-30 yesterday morning to head to the airport.    My flight to get me to Tortola was actually to St Thomas where I planned to catch a ferry yesterday to West End Tortola from downtown Charlotte Amalie.  Well, that’s at least how it was supposed to work.

However, as luck would have it, “no-can-do” ruled the day, with delay after delay.  The airport, Hartford, was a mess when I arrived.  Who’d expect so many people would be up at the tender hour of 05:00.  What a mob, a sea of humanity.

After a long while we learned that catering, yes the folks that bring the little bags of pretzels, were AWOL and the crew had absolutely no idea of when they would be arriving.   We were on board, the plane was totally packed, and we were just sitting there, for a long time.  How long?  Not sure but it was long enough that the pilot came on a number of time to talk about the delay and finally said, “we’re leaving, catering or not.”  The problem was that while they had plenty of lovely snacks for the run down, they needed food for the run back but that now the plan was to fill up again in St Thomas.  We left the gate, finally.

After that we sat, and sat, and sat and finally the pilot came on to say that we had a mechanical problem and needed to talk to the repair guys.  Ok, I get that as it’s always a good idea to have a “happy landing” at the other end of the flight. However, by the time they crew sorted all of this out they decided we just had to head back to the gate and assess the situation.    We need a new plane! Awesome.

We “de-planed” and were sent to another gate…. at the total other end of the airport.   I was one of the first to arrive at the “new gate” only to learn that we had to be sent back to where we had “arrived” as they had “changed the changed gate again”.  Never mind.

Ok, so we got back to the gate and waited some more, much more.   To their credit, they did bring sandwiches and drinks.   A sort of “peace offering”, I guess.

So, fast forward several more hours and we finally left on another aircraft and arrived in St Thomas about 5 hours after our planned arrival time.   The problem for me is that the last ferry for Tortola had left hours earlier and I had to now find a hotel.  Lucky me.

I had decided to fly into St Thomas as it’s a lot less expensive than flying into Tortola.  Oops.  It didn’t look so inexpensive now.   Hotel at 21:00 hours?  No idea where to stay?  Don’t want to pay much?  Have fun Bob…

The information lady at the airport, who BTW was giving out samples of Cruzan Rum as we entered the terminal.  “Welcome to the Caribbean Mon!”.   Anyway, I asked for an “inexpensive” hotel and she recommended that I call Franko’s Guest House as it wasn’t very expensive.    However, she warned me that she had recommended it to a lady a few days ago and that lady didn’t even get out of the cab and went somewhere else.  Ok, sounds perfect, I’ll take it!

When I arrived, after a stop in the cab at a convenience store to get a toothbrush, Franko’s wife was waiting on the front porch for me.   “Welcome to Ranko’s.”  I thought it looked quaint. Besides, it wasn’t too expensive and anything was better than a nap on a bench at the airport. 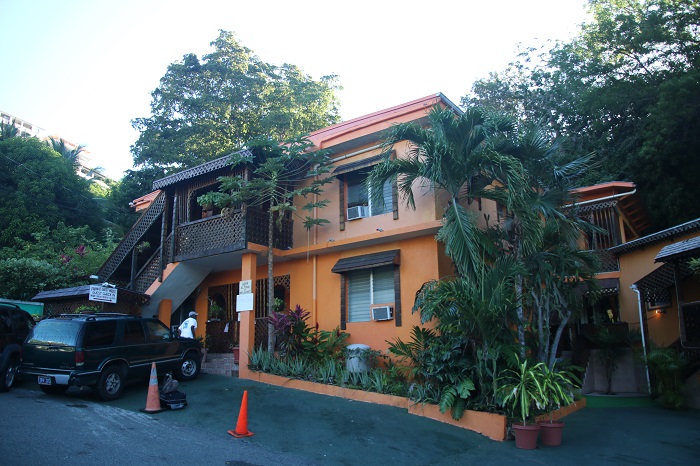 They have a cute little open air dining area. 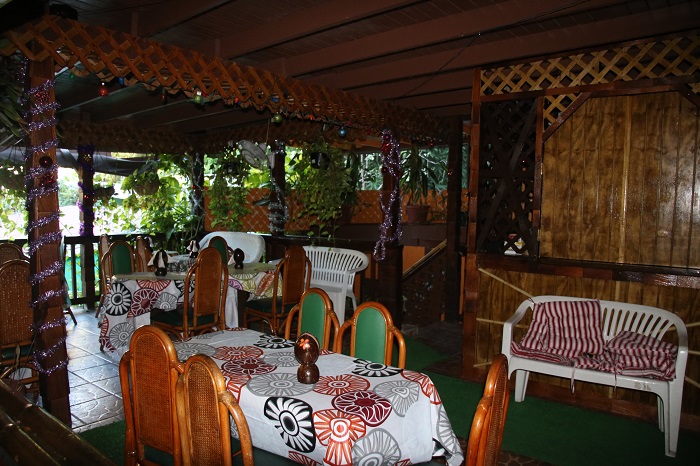 Believe it or not, he, Franko himself, even took me to the ferry terminal this morning.   Along the way he told me about how, when he was younger, he drank a LOT of rum but after his older brother “gave him a stern talking to” he shaped up and became a carpenter and later opened his B&B.   He does all of the work himself and is clearly very proud of his place.  “I make a little money and fix the place up a little bit ore.”  All and all, a simple place, Franko’s and a very charming experience.

So, I went down to the ferry terminal this morning and as I arrived I spied this terrific float plane.  I totally should have gone in that.   It looked awesome at the dock. 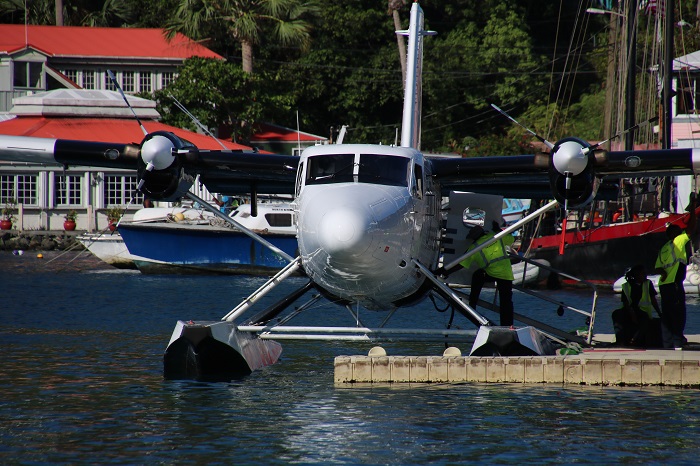 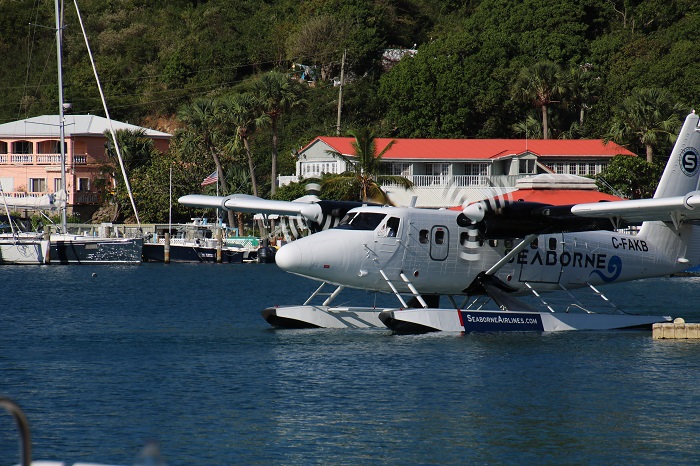 I’ll bet that he has to wash things off really, really well every evening with all the salt spray. 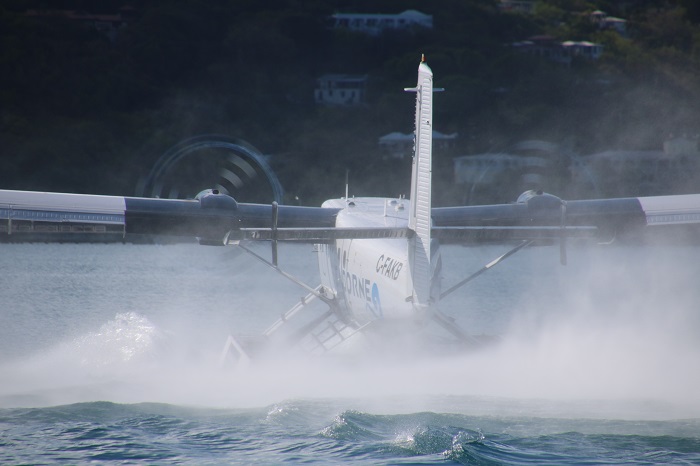 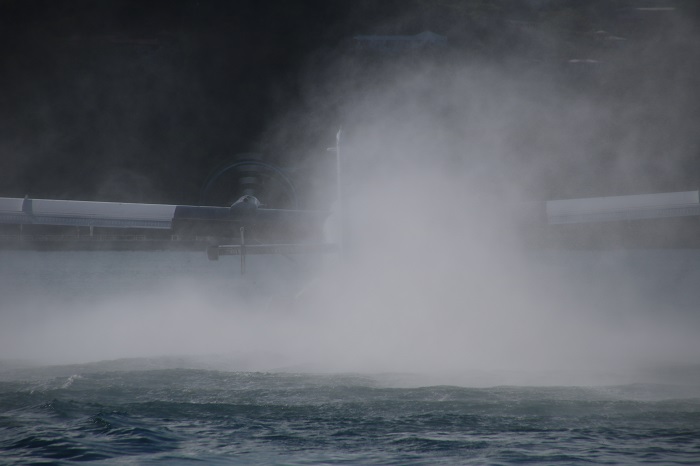 Yes, after all the shenanigans yesterday I should have treated myself to a trip on one of those.   And then he was gone and on his way. 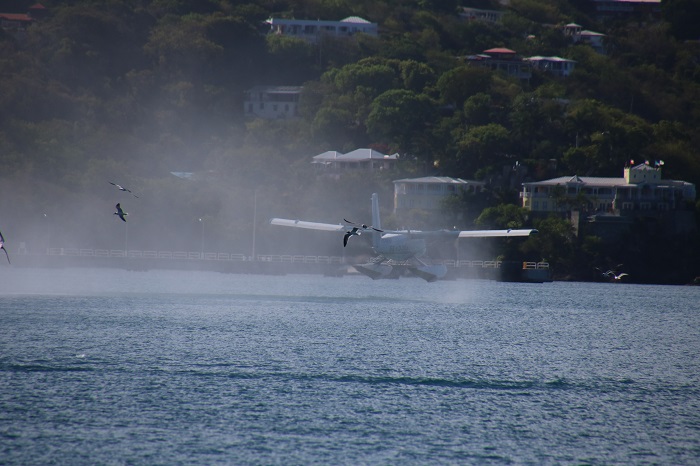 So, here I am and Pandora’s looking good and none the worse for two weeks alone.   A few chores and tomorrow I head over to nearby Nanny Cay to take a slip for a few days to participate in the run-up to the Salty Dawg Rally and to wait for my crew.

Yes, I’m here but it’s pretty clear that sometimes you just can’t get there from here.  Or, at least you have to take more than one day.

Finally though, I’m here, back aboard Pandora, and it’s a beautiful day.