Chestertown and what about those boat names?

It’s Sunday morning and the sun has just peaked over the horizon to begin what promises to be another beautiful day.  Yesterday we came up the river, all 20+ miles of it from Rock Hall with a strong southerly wind.  We did have to motor into it for about 8 miles prior to turning into the river.

The winds were running in the low 20’s so I was able to sail up the river under jib and then genoa alone.  While this photo of Pandora wasn’t taken yesterday, this is what it would have looked like had someone been along with us.  This shot was taken by Julie Palm of Altair took it when we were sailing with them coming out of the canal the other day. 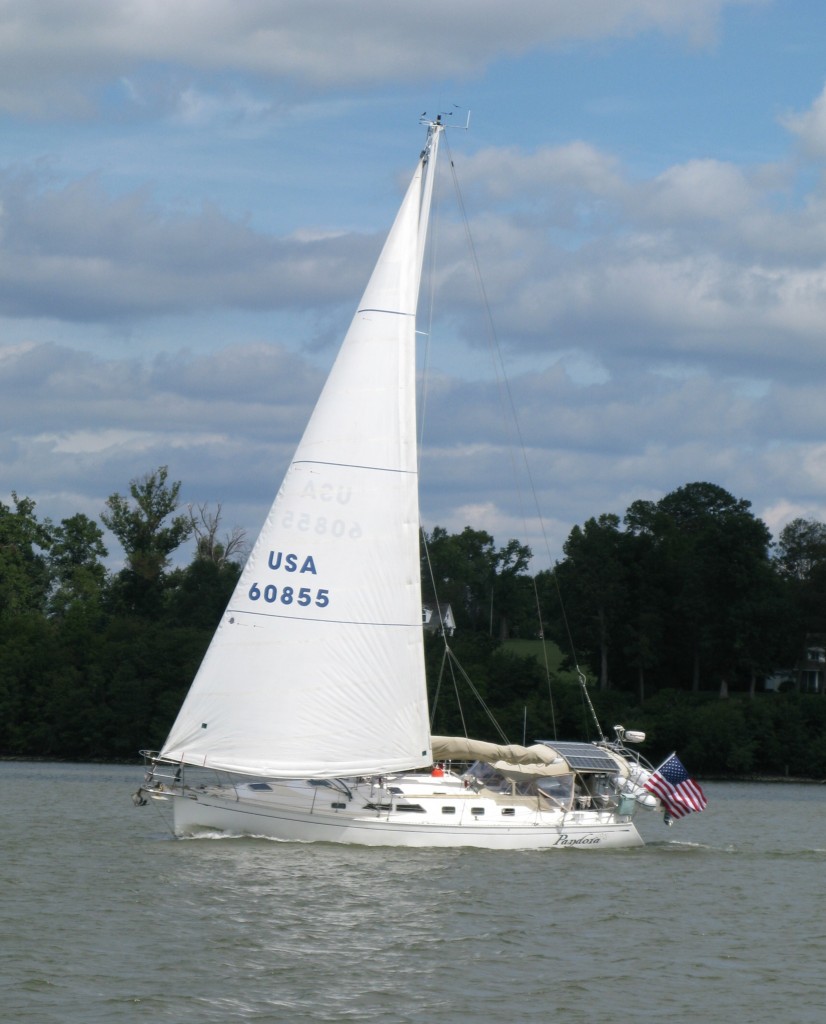 Coming up the river was very pastoral with farms lining both sides all the way up.   Some of the farms certainly looked like the farm wasn’t their primary business as the main houses were massive brick buildings with many chimneys. The current was swift and it shoaled up quickly on each side.  Staying in the middle of the channel and watching the buoys was a good idea. 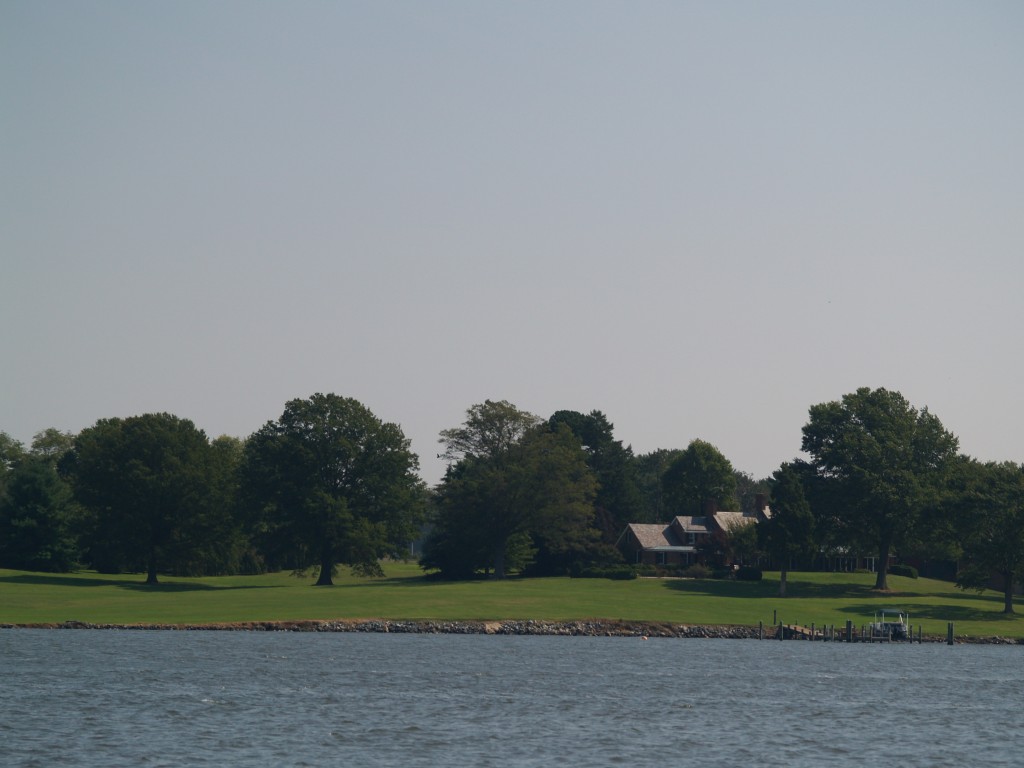 Fish traps are common here too.  The concept is for a net to be stretched across the current to lead the fish into an enclosure as they try to swim around the net.  The birds perched on the poles much think that they work as they hang out waiting for a meal. 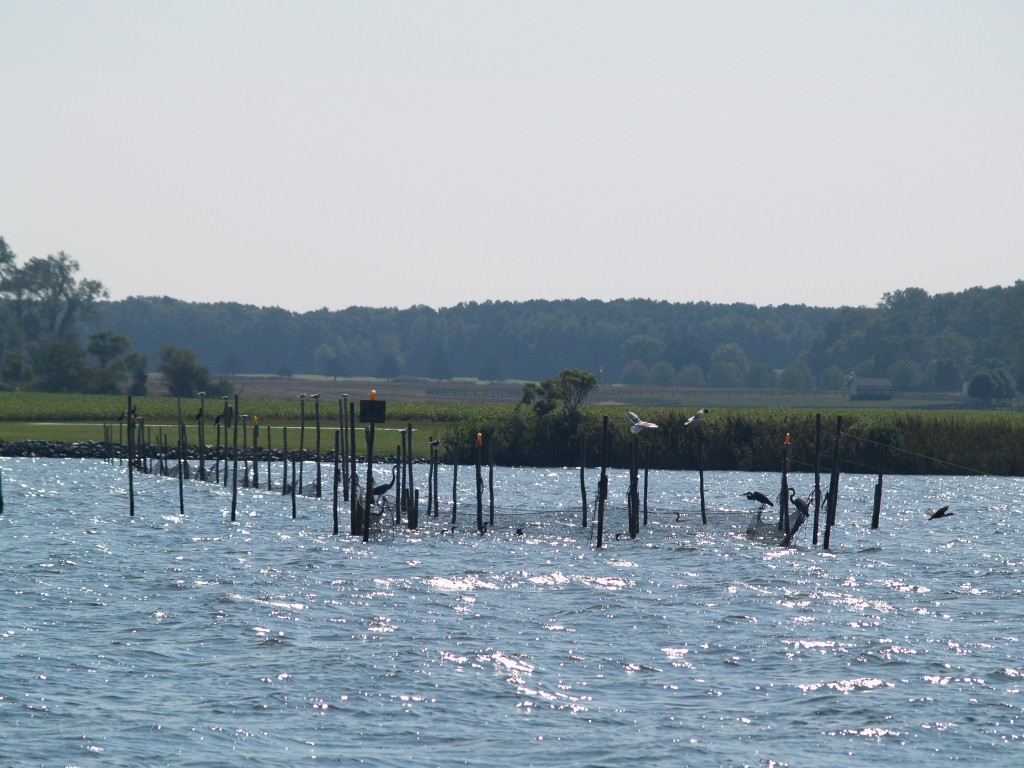 This was an interesting building as it appeared to be made up from two silos.  Pretty interesting design.  I don’t think that it was the main house on the property though as there was a main house nearby that was much larger. 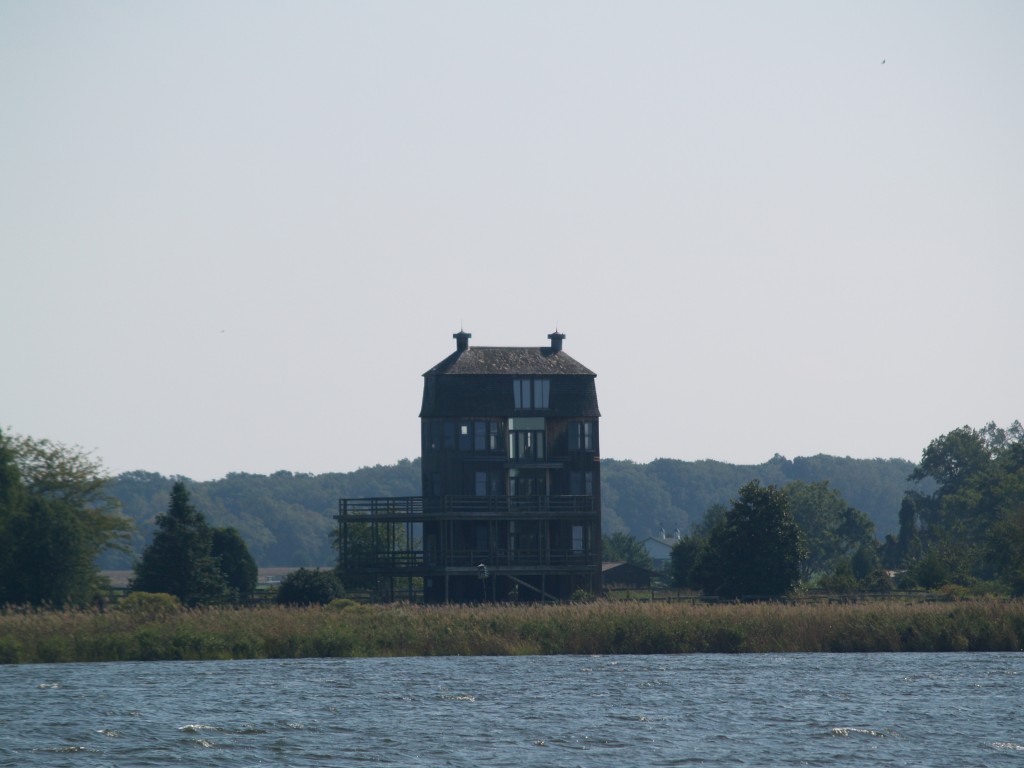 As we arrived in town it seemed like everyone came out to greet us.  Very heartwarming.  We waved back only to later learn that it was Parent’s Weekend at Washington College.   Oh well… 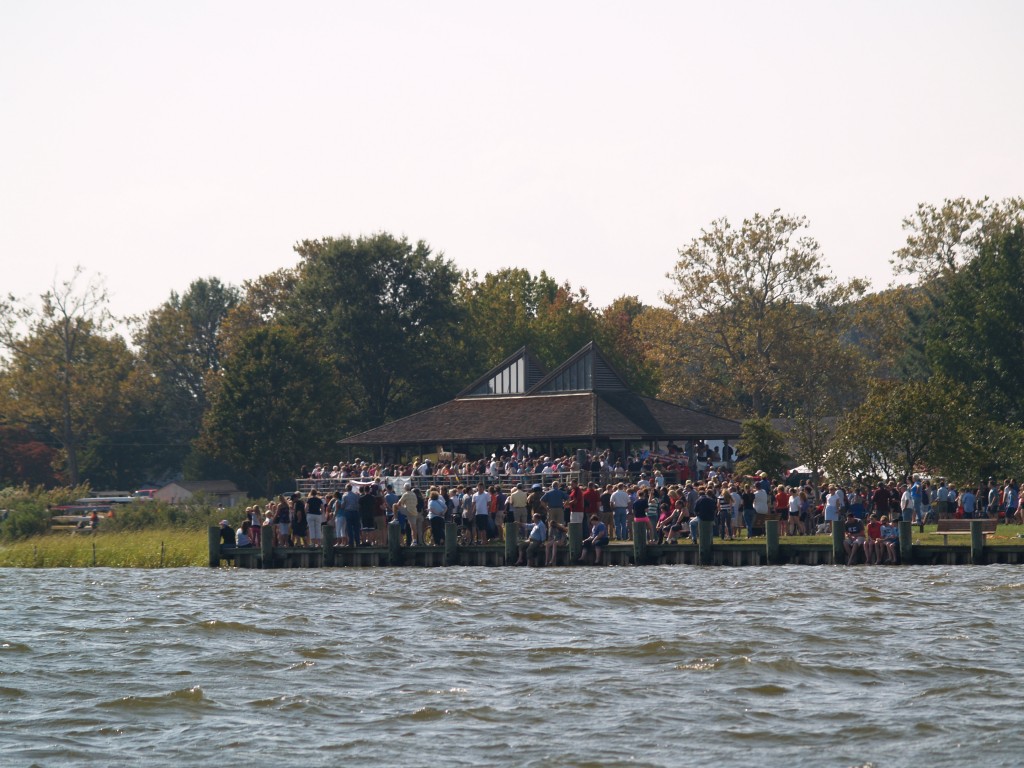 sA reproduction British Revenue Schooner was constructed here a number of years ago, the Sultana, and she gives day sails on the river.  She’s very pretty under way.   Some of the colors are a bit garish though.  Perhaps the British didn’t have Martha Stewart to advise them back in the 1700s. 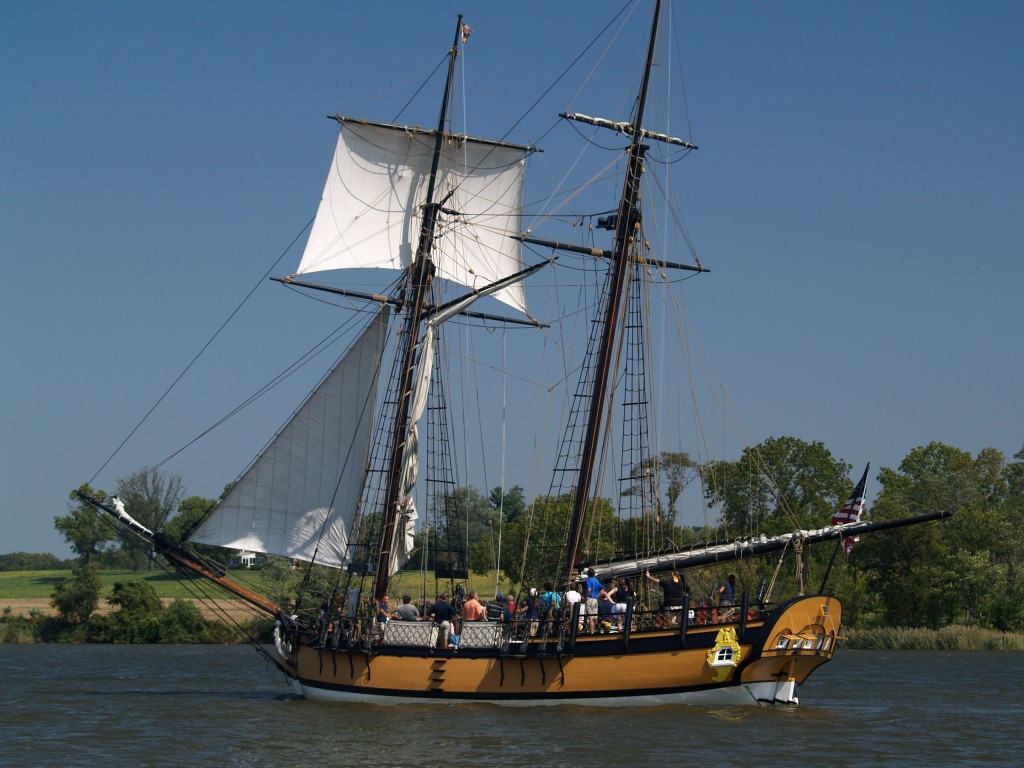 And, even better looking in the early morning light today with some of the town’s historic buildings in the background. 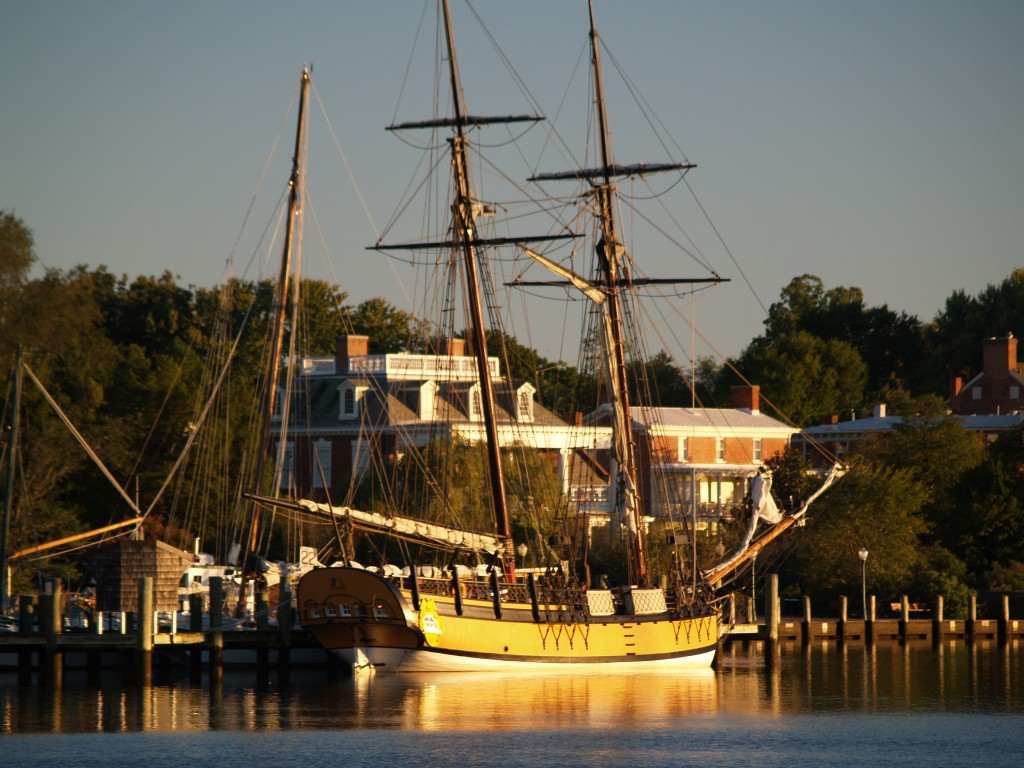 I liked this motor-sailer that came in yesterday. 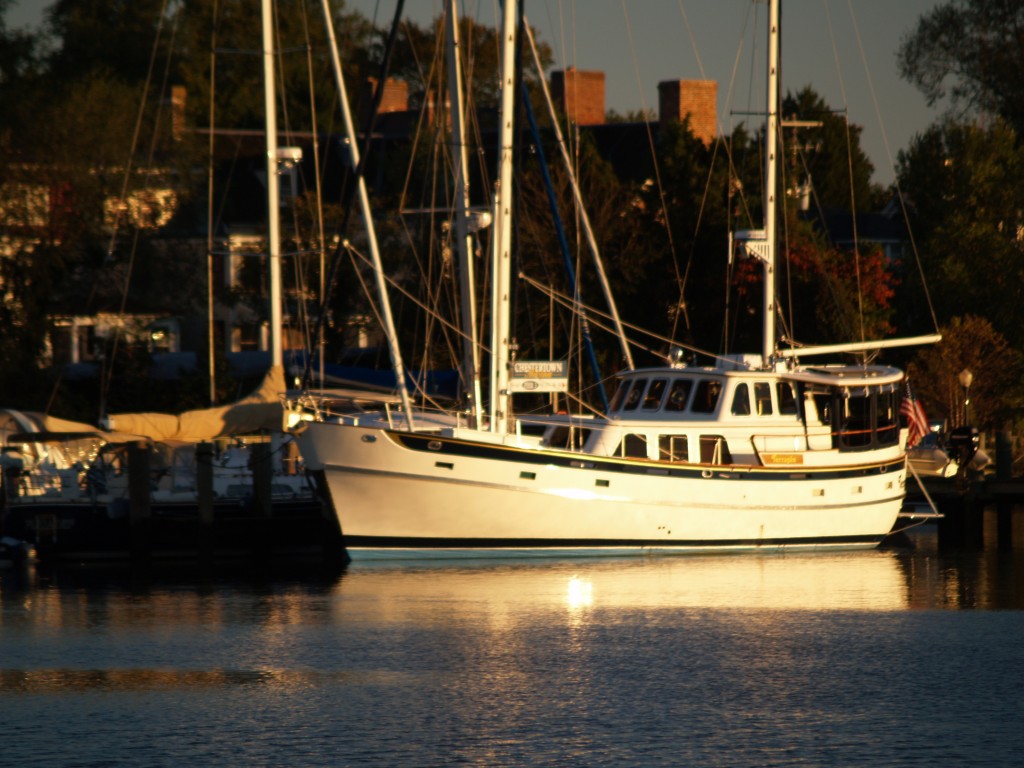 The current runs hard in the river and with the strong south wind yesterday Pandora didn’t know which way to lay on her anchor with the wind and current opposing.  Last night a cold front came through and the winds shifted from the south to the north.  These winds are supposed to hold for another day so we should have a fair breeze to head back down the river on Monday.

Coming up the river yesterday we were struck by some of the names of boats that were hailing one another on channel 16.   They went something like this…

“Incognito, Incognito, this is You are making me crazy calling, come in Incognito”.   They called several times and I was wondering if perhaps Ingonitio didn’t want to be found and found You are making me crazy a bit annoying.  Hearing that name repeatedly was bugging me.   Another one (and no, I am not making this up)was,  “Sail Away, Sail Away, this is Brave Heart’.  Were they telling Brave Heart what do?  Hard to say.  I could just imagine Sail Away heading in the other direction when they heard their name on the radio.  I wonder if they are able to sail together often or if they get separated?  Hmm…

Two other boats sailing in company that seemed to be a better match were Patience and Steadfast as well as Living the Dream and Just Chillin.  I guess that the addage “birds of a feather flock together” is true.  Well, at least when it comes to boat names.

However, fit together or not,  WHO IS ADVISING THESE PEOPLE on boat names?  I mean, really!!!   The other day a friend said that when they named their boat they said the name three times fast, as they would when calling on the radio, so that they could hear how it sounded.  That’s good advice.  Not sure that these folks got the memo.   Just guessing.

Today we have a few chores to do, including laundry.   The local architecture is lovely as many of the buildings date from the Revolutionary period.  In fact, we are planning to have afternoon tea at an old inn today.  More to come on that.