It’s Easter Sunday and I have to admit that it doesn’t feel much like Easter. Brenda’s in MD with our son Rob and his family and it’s a beautiful day here in Antigua.  However, I’d rather be with Brenda and kin, frankly.

Yes, it’s a beautiful sunny day which is good as yesterday was uncharacteristically cloudy and rainy, something that I haven’t seen in at least a month.  Yes, we do get showers with fair regularity but a grey day with showers and rain, not so common.

Craig arrived on Saturday afternoon and seems to be settling into the cruising lifestyle.  Last night I invited two couples, Sue and David of Sans Cles and Al and Tess of Inomar, both Salty Dawg Sailing Association members and live aboard cruisers.  Sue and David are heading toward Panama for the hurricane season and no return home date on their calendar and Al and Tess will be heading back to work after taking a year off to cruise.

I thought that Craig would enjoy getting the perspective from cruisers to better understand “how the other cruising half lives”.

Yesterday we cleared out at customs as it’s our plan to set sail later this afternoon for the 100 mile run to St Martin.  Unfortunately, as much as I’d like to visit St Barths along the way, we have decided to bypass that island as it’s likely to be somewhat rolly in the anchorage with the expected north swell.

The wind forecast is for moderate easterly trades which should make for a very nice run.  I expect that we will pick up anchor and get underway around 16:00 this evening.  Of course, if you are curious, you can follow along under the link “where in the world is Pandora” on the home page.  Or you can go right to the dedicated Google Maps page and see where we are “sort of” right now.

Customs, where you clear in and out here, is located in English Harbor, home of Nelson’s Dockyard.  As they are hosting the Classic Yacht Regatta, only a week away, a remarkable collection of boats are beginning to arrive for the festivities.

After finishing up the paperwork required to leave Antigua, Craig and I walked out to the lookout at the head of English Harbor, to the spot where British troops were once stationed to watch out for enemy ships.    Along the way was a beautiful flowering tree with perhaps a dozen hummingbirds vying for the most choice flowers. 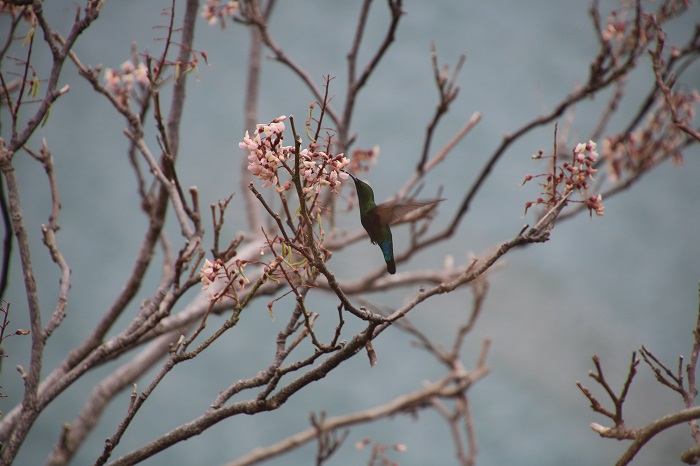 Now, we are working to get a glimpse of the beautiful classics.  Turn around, face the harbor and there is plenty to look at. 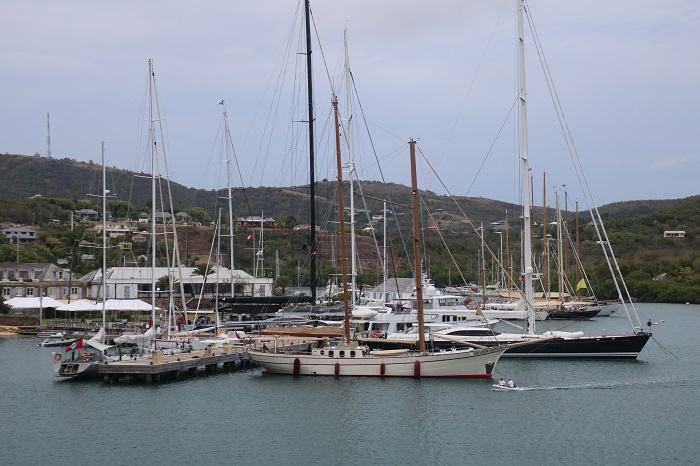 A few days ago these docks were nearly vacant.  Now, more yachts arrive every day.  In a week’s time the place will be wall to wall classics. 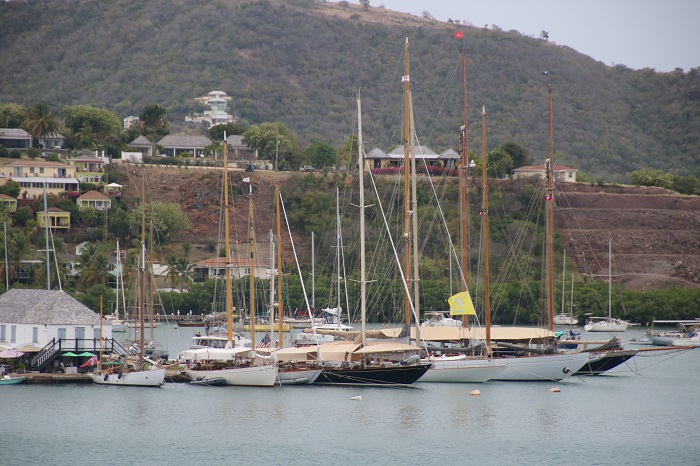 As we watched, the three masted schooner Spirit of Bermuda rounded the point and prepared to enter the harbor.   She was built in Rockport maine and launched in 2006 and serves as an educational vessel and ambassador for Bermuda.  I have seen her in Maine and now here.  She’s a sight to behold with her impossibly tall masts.    You can crew on her if you’d like to spend time aboard.  Check out their site. 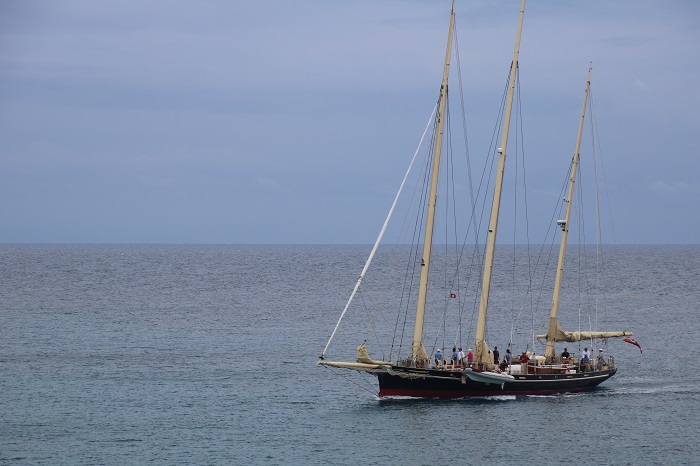 The deployed their dink to help maneuver into position to med-moor against the bulkhead at the dockyard. 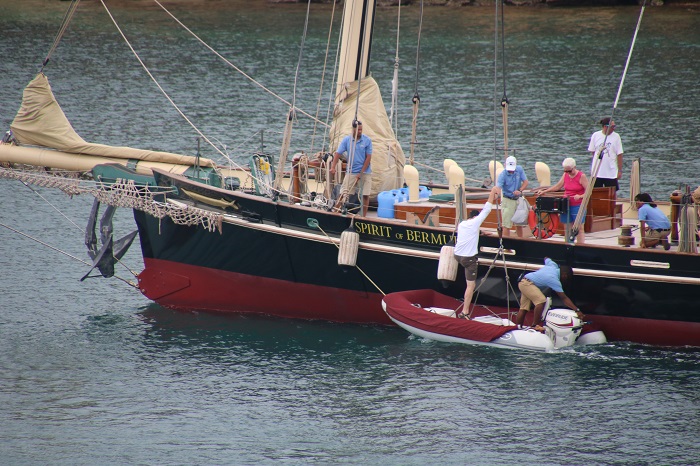 They dropped their two bow anchors and backed toward the dock yard wall. 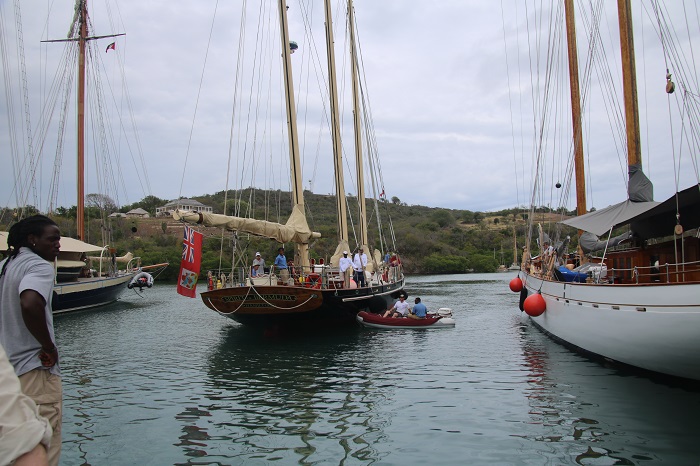 The line handler caught the lines tossed to him by crew.  Neat, what you can do with action shooting at 4 frames per second.  Action shot, anyone? 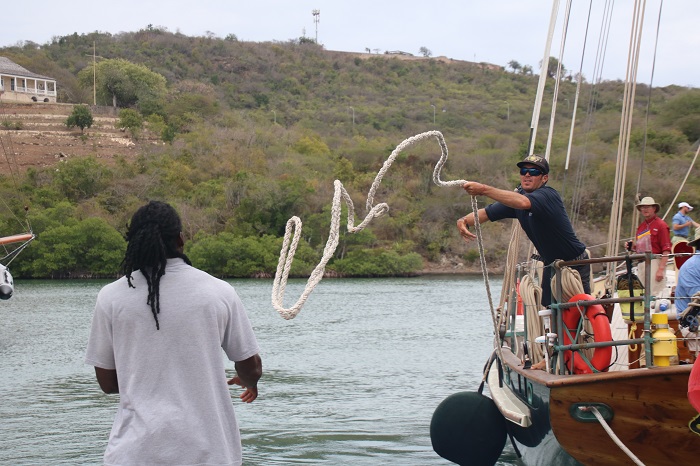 Even though they had a large crew on board, a tender pushing the stern as needed and line handlers on shore, it still takes brute strength to bring everything together. 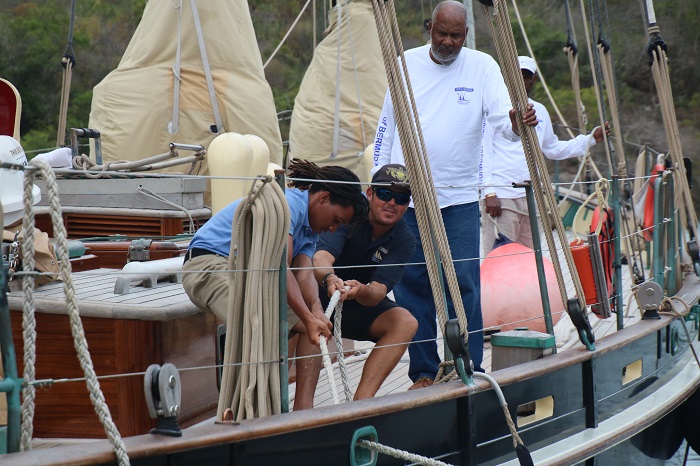 While this will soon be the near exclusive domain of classics, there are a few super high tech beauties there.  It’s hard to believe that the “little” one on the left is nearly 100′ long. 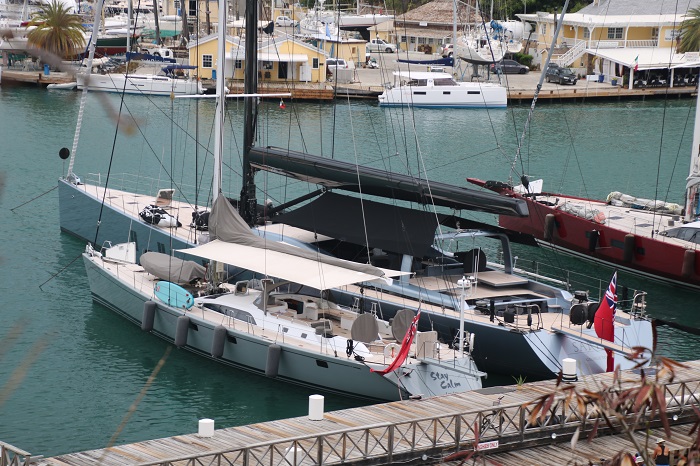 Nice cockpit.  However, not a lot of protection from the sun. 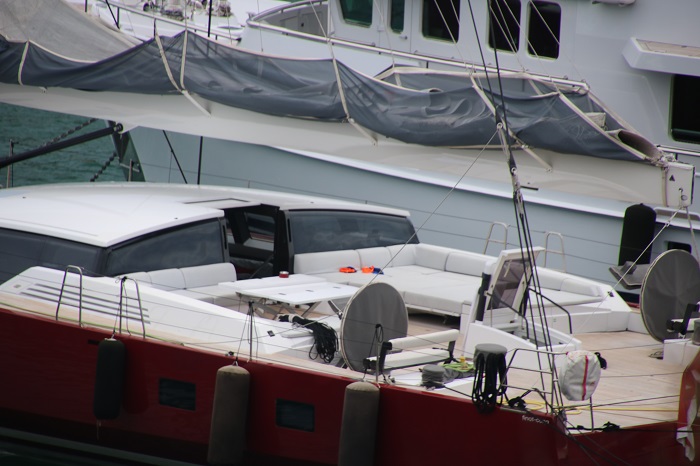 Well, this is the last post I will do from Antigua this year as later today we begin heading home, sort of.   Craig and I will be leaving this afternoon for our run to St Martin, a few days there and then on to the BVIs where Pandora will sit for two weeks while I head home for a short visit.

It’s a bummer to be away from Brenda for so l0ng but at least I know that as I head toward the BVI every mile brings me closer to her and home.

Well, wish us luck in our overnight voyage tonight.  It should be a great sail with wind and a clear night to carry us on our way.    Antigua’s been nice but I can almost taste the baguettes and pastries.  You gotta love those French islands.

Yes, it’s good to be heading home, sort of…

2 responses to “Heading home, sort of…”