Well, my visit here in Antigua is just about over as my friend Craig will arrive tomorrow and we plan to head up to St Martin on Sunday night.  We’d love to stop in St Barths but there is a large northerly swell running that will likely make the anchorage there very rolly.

I spoke with Chris Parker, our weather router, today and he told me that the sailing conditions should be great, likely a broad reach in 15-25kts, but that any anchorage that might be affected by a northerly swell, in this case 7-8′, is probably best to avoid.

I guess I’ll check back with Chris on Saturday and see if his forecast might have changed.    Happily, my SSB radio is now back in perfect health which is just so great.  I have participated in a number of nets over the last few days and I am told that indeed they “can hear me now”.  What a relief.  It took months and more than a few “boat dollars” to sort through that problem.   All better now.

When Brenda and I were tied up in English Harbor Antigua during our last visit here a month ago, while our son Christopher was visiting, we saw a group of folks standing outside of a bar in the dockyard doing some sort of chant.  Actually, the looked positively “druidesque”, if you ask me. 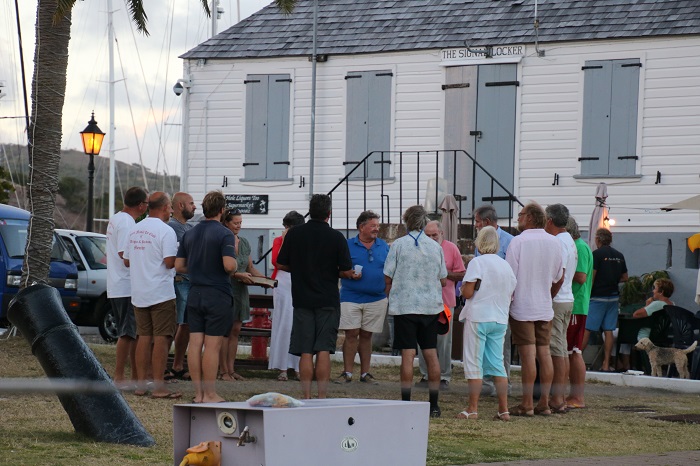 When we returned to Antigua last week, our friends Sue and Dave of SV Sans Cles, invited me (Brenda had already flown back to CT) to participate in an evening meeting of, what I now know is the Royal Navy Tot Club of Antigua and Barbuda.

So here’s the deal and once again this proves, without a question, that there is indeed a club for everything and everyone.  And now that I know about the Royal Navy Tot Club I am fairly certain that the Brits lead the way in that department.

So, you might be asking yourself, who are these people that stand in a circle and drink rum?   This is what they have to say about themselves.

“The Royal Naval Tot Club of Antigua & Barbuda was formed in 1991 by a small group of ‘like minded people’ who met at the end of the working day to toast the Queen and reinstate the Royal Navy’s tradition of a daily tot of rum which had been discontinued in 1970.

Very soon, others began to join the ‘circle’ and the Royal Naval Tot Club of Antigua & Barbuda developed into an organisation recognised not only in Antigua but worldwide.  The Tot Club formalised itself by writing some rules known as Standard Operating Procedures.  It is only possible to join the Tot Club in Antigua and well over 500 have joined to date.  An aspiring member has to be invited to join by an existing member and pass though a joining routine which includes a test on Royal Navy history.

The Tot Club meets at 6 pm each evening when guests may be introduced, announcements made relating to points of interest and a reading from Royal Navy history pertinent to that day.  The reading is followed by a toast which is different for each day of the week, however, all toasts end with the words ‘…and the Queen, God Bless Her’.”

All of this grows out of a long tradition in the British Royal Navy to issue rum/grog to the troops.  Sadly, this tradition was abandoned in the 70s.  I guess in our “PC” obsessed world, issuing rum aboard ships full of guys with big guns was no longer considered to be a good idea, and to carry on that tradition was the reason that the club was formed.

So, Sue and Dave delivered me to my official meeting of the Royal Navy Tot Club.  It was a hoot.

“Bob, what was it like?  Do tell.”   Here’s the deal.  To join the club you must show up for seven nights within 14 days and “take a tot” of rum.    Of course, to attend you must have a sponsor and be recommended by a full member, in my case, Willie and Kathleen.  A nice couple who were sponsors for Sue and Dave.    Don’t they just look so, well, so British? 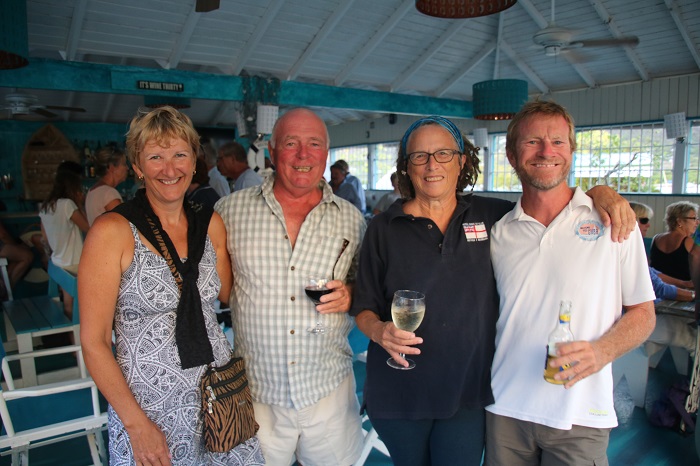 I won’t go into all of the details of what transpired except to say that on your “introductory visit” you, and in this case, I was presented with  a “megatot” of fine Pusser’s rum, the very same that was issued to the troops for so many years,  in a rather large, or so it seemed to me,  glass tumbler.  The deal was, that when prompted, I was to take the “full measure” in a single gulp.  And, let me tell you, it was a big gulp.

The group gathered around a table with a “tot” in one hand and a water “chaser” in the other.    You really need that chaser to take away a rather substantial burn from such a gulp of rum.  Well, I needed it. 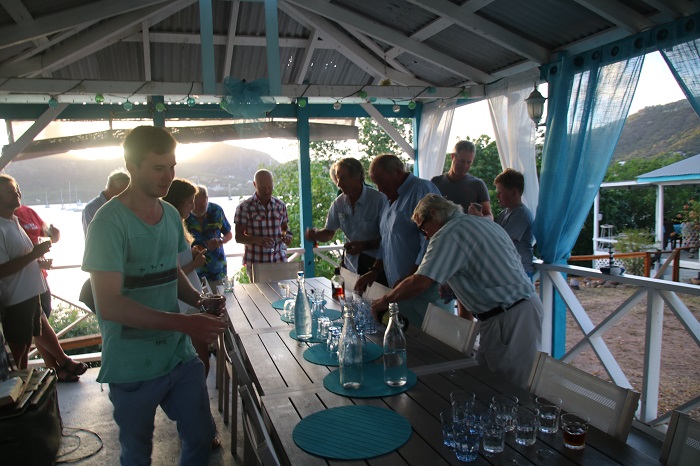 Before the tot and chaser, a passage, I guess about Lord Nelson, is solemnly read.  That evening’s “reading” was shared from “the book” by Peter, a very solemn British bloke. 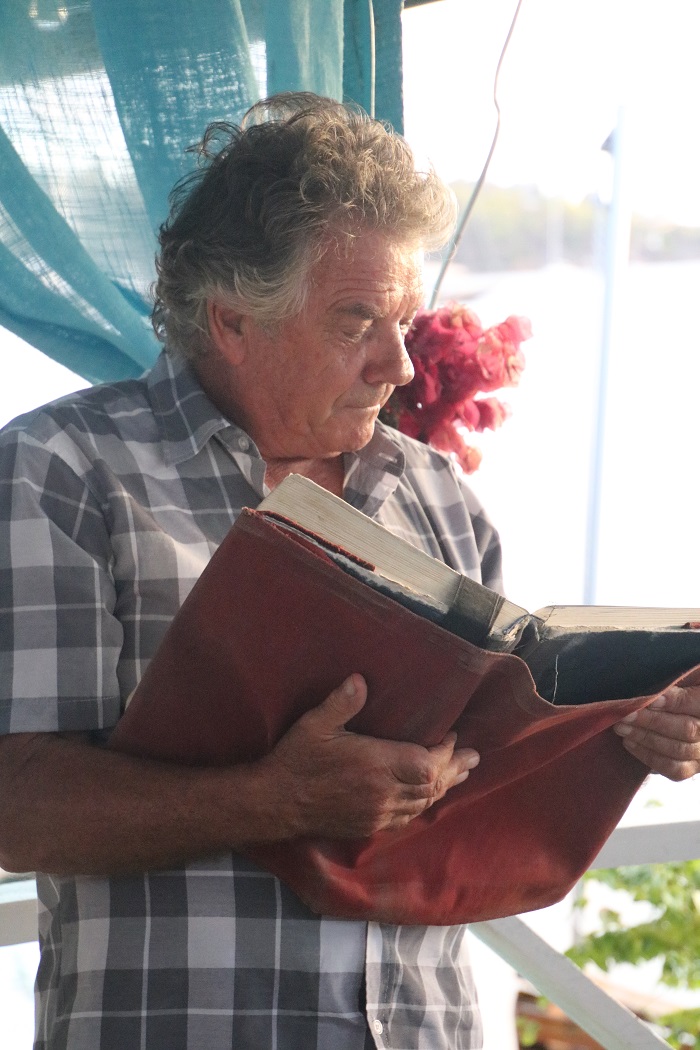 After that, well, I am not completely crystal clear on what happened after my “tot” but I am confident that Sue and Dave were “inducted” and I was smiling.   As near as I can recall, it was a lot of fun.

Fortunately, with the exception of the “intro” night and the night of “induction”, you can pour your own tot so it needn’t be too big and after a week of that and memorization of important facts and details, you may become a member.

Unfortunately, I won’t be here for another week so I will be deprived, at least until my next visit to Antigua, from applying to be a full member of the Royal Navy Tot Club.

Well, at least there is something to look forward to when Brenda and I return to Antigua next winter.

Don’t you feel sorry for all the sailors here in Antigua who don’t know about this exclusive club?   So, what does everyone else do to keep busy if they can’t attend?

Well, last night, aboard The Maltese Falcon, it was movie night.   Yes, movie night.  Unfortunately, while I did spend some time with the crew of Marie, the 200′ Vitters Ketch that Brenda and I sailed on two years ago. I wasn’t invited to the movies aboard Falcon.  They unfurled one of the aft sails and voilas, a movie.

So, if you wonder what folks to do keep busy here in Antigua, now you have your answer.    If you are one of the .001% crowd, movie night.  For the rest of us, assuming that you know the right people, there may be a tot waiting for you here in Antigua.

You just can’t make this stuff up.   And why would you want to when real life is just so entertaining.