The Maltese Falcon and a pain in my AIS.

I wasn’t sure what to have as a title to this post and was thinking that I might use yet another reference to whacking moles.  However, as has been the case with so many issues that have come up this winter, I thought that something about it being a “pain in my AIS” was more fitting.  So, that’s the title…

Anyway, dear reader, I have certainly had my share of “technical challenges” with Pandora this winter and it is worth noting that, for the moment anyway, the FINAL mole was whacked into his hole as of this morning.

When the SSB radio crapped out a while back we had a power surge that also took out the AIS transponder.  AIS, the following link is a bit outdated as the system is required on much smaller vessels now but not on those as small as Pandora.

Automatic Identification System, is a program similar to that used by aircraft designed to make it easy to identify who’s going where and how close they are likely to come to one another.  From my perspective, it is a terrific safety feature to have aboard as it allows us to monitor other vessels in the area and to determine if they are a threat to us.

Getting the AIS repaired proved to be problematic and we ended up having to purchase a new one.  That was very painful but it had to be done.   The installer, with the hope of saving time for the installation, made a point of replacing it with one from the same manufacturer so that it could use the same cabling and simplify the installation.   Well, it did include the same cables but getting it up and operational proved to be anything but simple.

As so many hours are in the SSB replacement job, I opted to do the AIS installation myself.  The electrician labeled the wires so I’d know which went where.  Simple yes?  Not!

I put it in place, powered it up and it sent out a signal but didn’t show up on my plotter.  Fast forward a day of fussing along with a few hours of diagnostics this morning it still didn’t work.  After we had exhausted every possible option the manufacturer finally suggested, “just switch the two wires and see what happens”.   Well, it worked.  All better now.  Of course, we won’t talk about the hours I messed around with it and all the back and forth with the installer.

With a functioning AIS I will be able to see all the big boats on my plotter and will be able to see them on my chart plotter including how fast they are going and how close they will come to me.   As an added bonus, those ships will also be able to see Pandora, assuming that they are looking, which they sometimes aren’t.  You too can track Pandora using this system on your smartphone.   Check out this link “where in the world is Pandora” to learn more 0n how to, sort of, “friend” Pandora and keep track of where we are.

The good news is that Pandora is operational now and ready to head off into the sunset.   Let’s hope that no more moles show up.

Enough of that for now.  Let’s talk about boats, no make that REALLY BIG YACHTS.    How about the Maltese Falcon, an ultramodern square rigger, a nearly 300′ long technological wonder, as it were?   She’s one of the largest, and certainly the most technologically complicated sailing yachts in the world today. 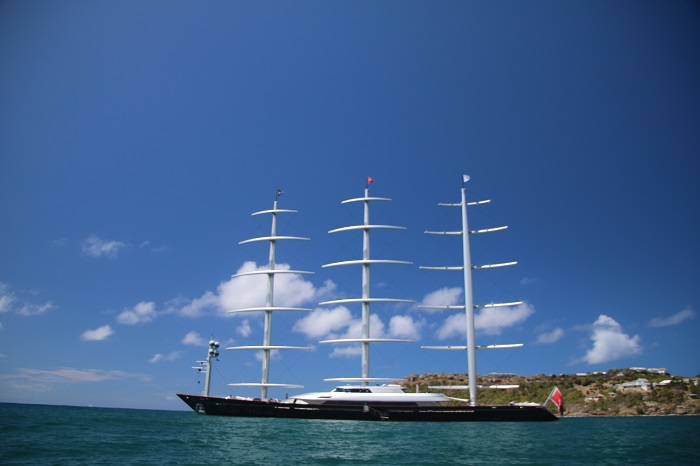 She was launched in 2006 in Turkey and was built for the Venture Capitalist, Tom Perkins, perhaps one of the most successful ever.  He made his money investing in early web startups including Amazon, Google, AOL and other high profile businesses.   And given the fact that he made his m0ney in Tech, it stands to reason that Falcon would be so technologically advanced.   Her rig, known as Dynarig, was originally designed as a way to power cargo vessels.

She’s known as The Maltise Falcon, but as I motored up to her transom I realized that she’s actually “Falcon” from Malta, the country where she’s registered.  Oh yeah, I get it.  Clever. 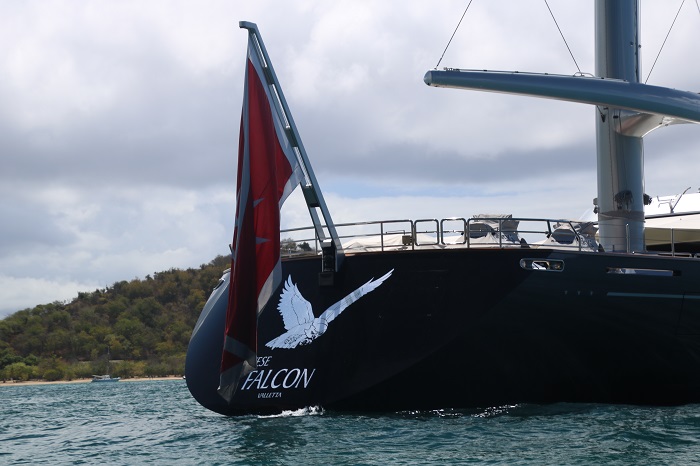 Perkins is deceased now and Falcon was sold a few years ago for $60,000,000 Euros, which is proof that no matter how much you have, “you can’t take it with you”.  However, if you rank him on the “he who dies with the most toys wins” scale, Perkins was a standout.

Falcon is now owned by a charter company and it is no longer used as a private yacht.  However, if you want to sail on her you have to pay for the whole kit and kaboodle.  No renting a cabin on her, it’s all or nothing.   Check out these photos and videos.  Amazing.

Want a video tour of your charter option?  Check this out.
You really get a feel for her “hugeness” when you see one of her 17, count em, crew on deck.   Big boat, little crew person, by comparison. 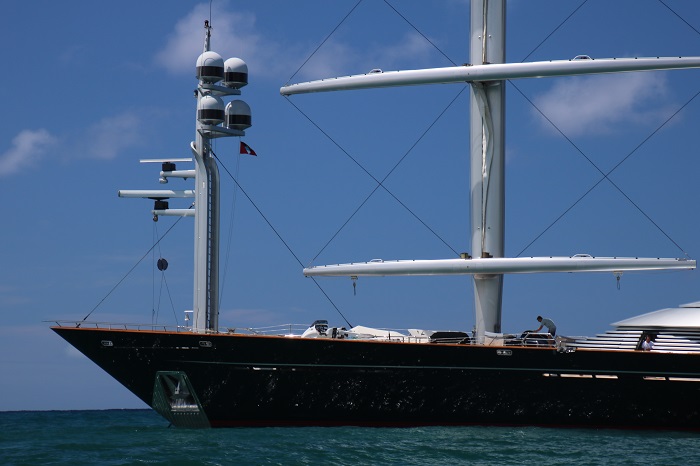 Her unstayed masts rotate to orient her 15 square, self furling, sails totalling nearly 26,000 square feet of sail,  to the optimal angle of the wind.  When fully furled they are oriented fore and aft, I guess, to minimize windage.  Windage? Good luck with that on a 300′ yacht. 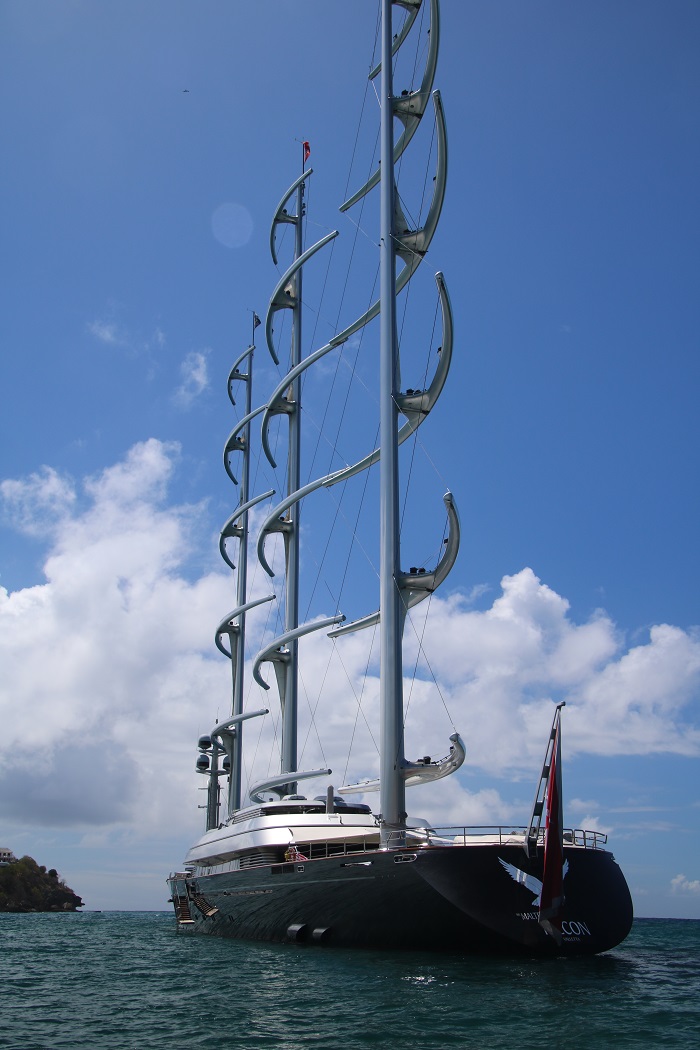 When viewed from her stern, the pattern of the spars remind me of a double helix DNA strand. 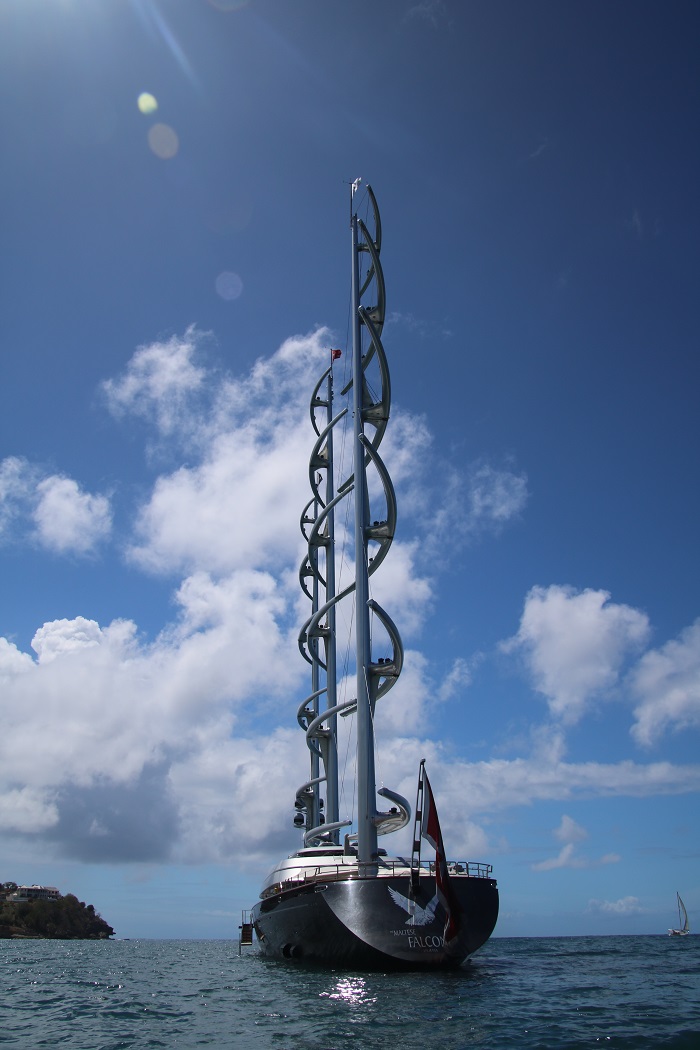 Falcon was the largest sailing yacht in the world when she was launched and surely reigns supreme as one of the grandest “high tech” achievements on the water today. 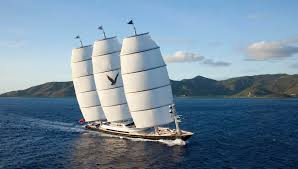 I am amazed every day when yet another magnificent yacht sails into Falmouth harbor here in Antigua.   I wonder what tomorrow will bring?

As amazing as they are, I can’t help but wonder what sorts of moles their crew must spend countless days whacking into their mega-yacht holes.

For me and Pandora, and I don’t want to jinx it, perhaps the worst is behind us but there is one thing for sure keeping her running well can sometimes be a big pain in the AIS.

I can’t wait till I get the bill.  As they say, “if you have to ask, you can’t afford it”.   Well, I’m asking and my fingers are crossed.

3 responses to “The Maltese Falcon and a pain in my AIS.”