The colors of Antigua.

Yes, we are still in Antigua and will be here for at least another week.  And, that’s because our son Christopher will be arriving here tomorrow.  After months of anticipating the POSSIBILITY that he would be able to take some time off and that he’d be able to visit us in the Caribbean, it’s actually happening.

So, here we are, in our third week in Antigua a country that I actually never imagined visiting until a year or so ago.  Such is life.  I guess you never know until you know.

Yesterday we had a big “first” when we successfully, well mostly successfully, completed a Mediterranean Moor with Pandora.  A Med Moor, as it’s generally known, is not commonly practiced in the U.S., where marinas have individual slips that you tie up in, involves approaching a bulkhead, dropping an anchor about three boat lengths away and then backing down until the stern is a foot of so from the bulkhead.  And here’s where it really gets interesting, this is all done between boats that are also moored in the same way on either side.

Brenda and I had never done this before so we really didn’t know what to expect. My plan was to put the tender, Pandora’s dinghy, off of the bow so when we backed down it would be out of the way and not likely to be sandwiched between us and the two boats that we were going to tie up between.    Normally, when we anchor, Brenda handles the helm and I deal with the anchor but in this case we opted to have her manage the anchor, deploying it as I backed toward the bulkhead.

Our friend Bill, from Kalunamoo, came along to help in case we ran into trouble. Fortunately, there were also a number of hands on the dock to help guide us in. And, to make things even more interesting, we would be backing into the wind.

When everything and everyone seemed to be ready we approached.  Brenda dropped the anchor on my “command” and we began backing toward the bulkhead.   Looking good, well at least until a few moments later when the anchor chain began dropping into the dink, that was now trailing off of the bow, instead of into the water.  Oops.  I had not anticipated that problem and the moment the chain began to get tight, compliments of chain piling up in the dink, I lost control of the boat.  In spite of the thrust from my bow thruster, we were dropping down toward one of the boats , also moored on either side of our intended path.

I increased the reverse power and was able to continue making progress as the chain was pulled out of the dink, really, really slowly.  By this time we were up against another boat but the “hands” were able to fend off, mostly.

One thing lead to another and we were finally able to get close to the bulkhead and were tied up.  No loss of life, or paint.  Success, if not an elegant approach.

Now we know.  Don’t let the dink trail off of the bow.  Problem solved. Well until the next time we have to do a Med Moor, which will be today when we move over to English Harbor and Nelson’s dockyard.   Wish us luck.

Here’s Pandora all snug in her berth.   You can see that pesky anchor line trailing off of the bow to keep her off of the bulkhead. 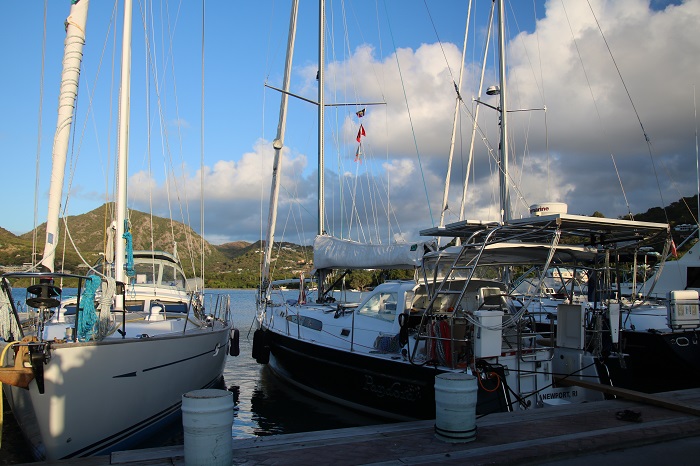 The reason we decided to come into the marina was to have the electrician finish up the SSB installation.  It’s about done with a bit of “mopping up” this morning. It’s hard to believe that a DC-DC converter this big is needed to power the SSB. It’s the size of a shoe box and costs as much as a the designer shoes that would fit in that box. 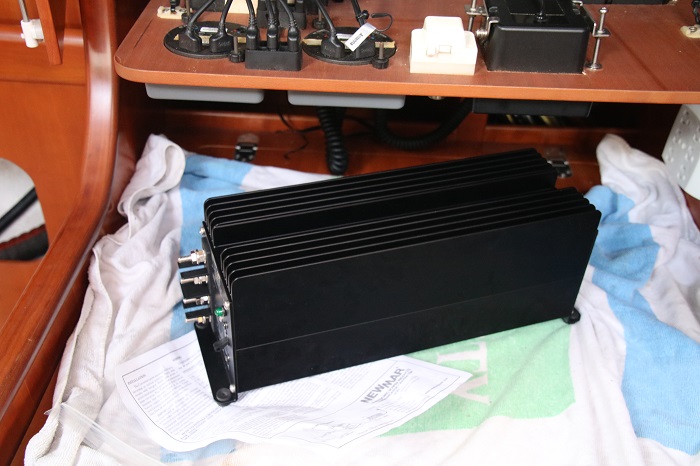 Our neat and tidy Pandora was trashed for the day. 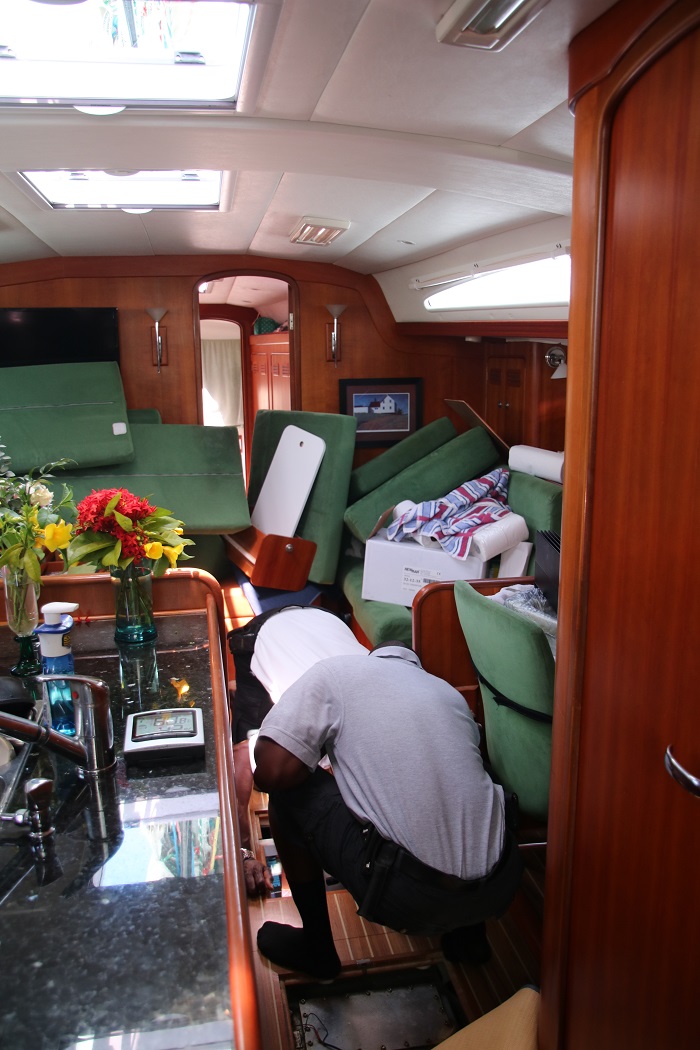 And from the “gift that keeps on giving department” the electrician now tells me that the AIS that was damaged in the power surge of the “roasting” SSB can’t be fixed so he has ordered from Europe.  Oh great.   This SSB had better work as it’s costing a bundle to get in place and operational.  “Can you hear me now?”

Anyway, enough of that for now.   How about I get to the title of this post, “The Colors of Antigua”.

I decided to go for a short walk this morning to take some photos around the marina.  The other day I posted a photo of a remarkable caterpillar that I had spied nearby.  These beautiful yellow flowered bushes are a favorite food for the Pseudosphinx tetrio moth. 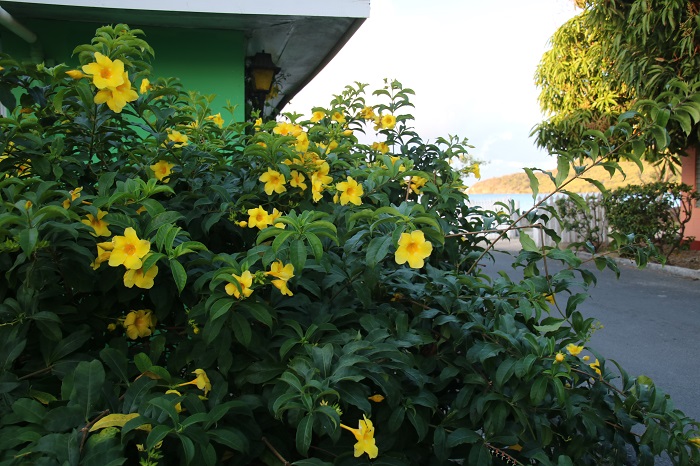 When it’s done being a caterpillar, it’s a big moth although I can’t vouch for that from first hand experience. 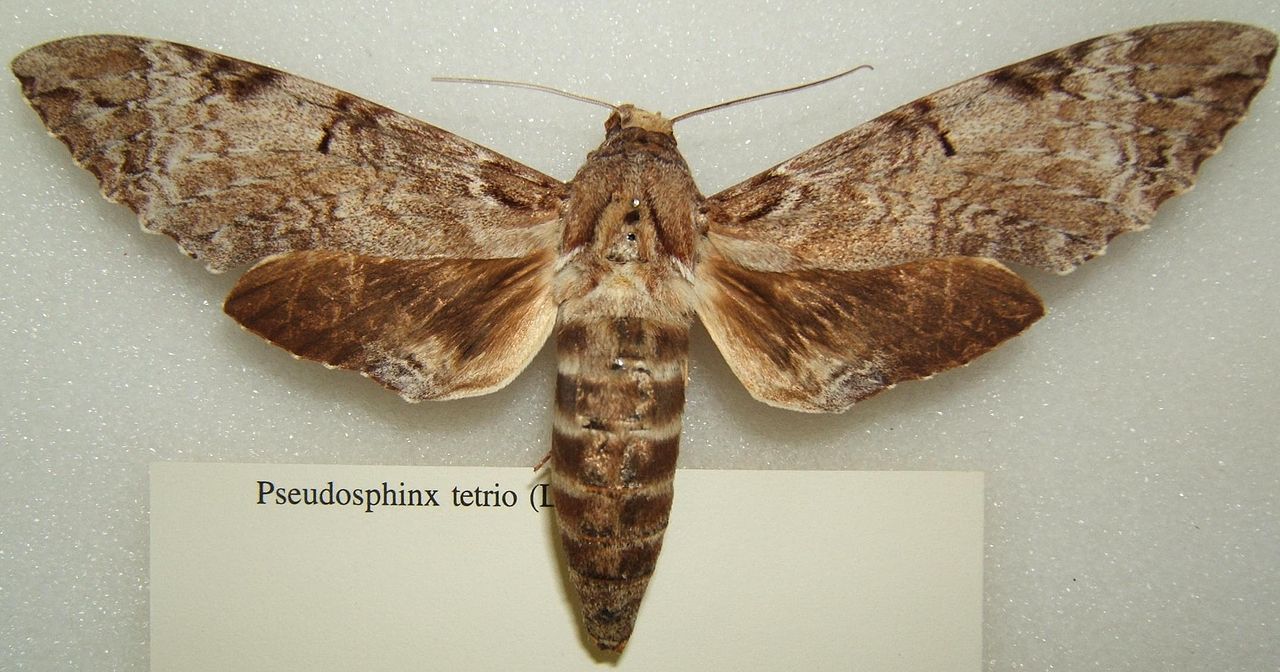 So, as you’d expect, it comes from a very large caterpillar, some 6″-8″ long.  Very colorful.  I generally think that a lowly caterpillar becomes a much more beautiful butterfly.  Not in this case, from my perspective at least, the moth is a step down from it’s predecessor. 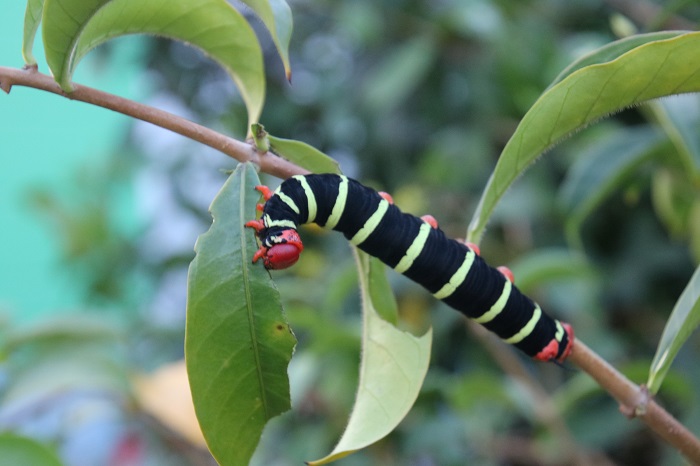 I have always loved turtles and a lady in the marina office has a number of young red footed tortoises in a basin with her at work.  She says that she breeds them in captivity and that these are about 8 weeks old.   These babies are small , about 4″ now but can grow to nearly 16″ long when adult.  I do wonder about the “breeding” part as it is reported that over collecting has made this species nearly extinct.  It is wide ranging in northern South America and I guess the islands too. 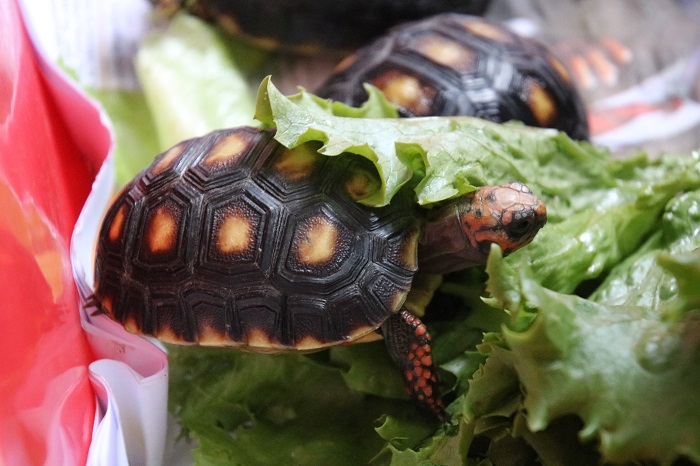 This one didn’t seem to be very upset being held by me for his/her beauty shot. Remarkably, they have red feet. 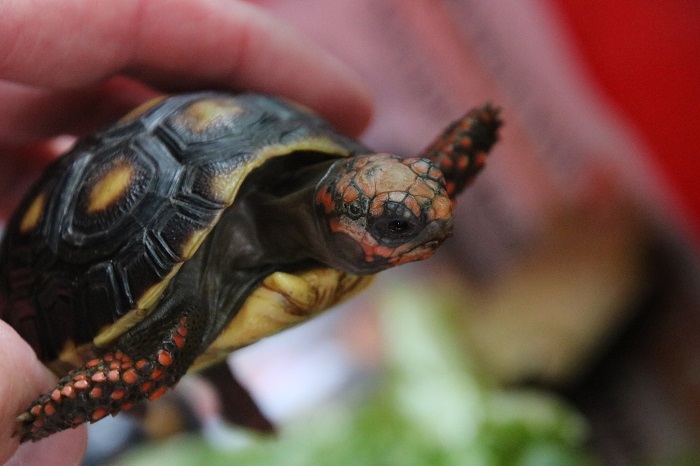 I am partial to these, palms?  Paradise plants? Whatever they are called.  They look so exotic. 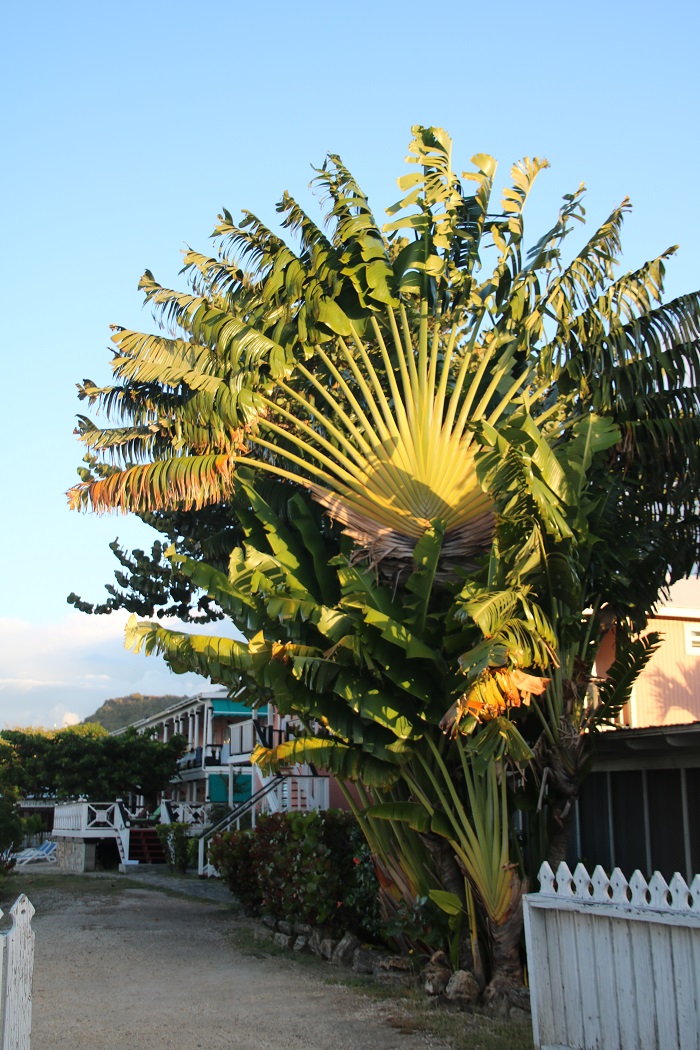 Hibiscus have always been one of my favorite flowers and this one, with it’s delicate fringes, is really stunning.  We generally have at least one variety on our porch for the summer at home. 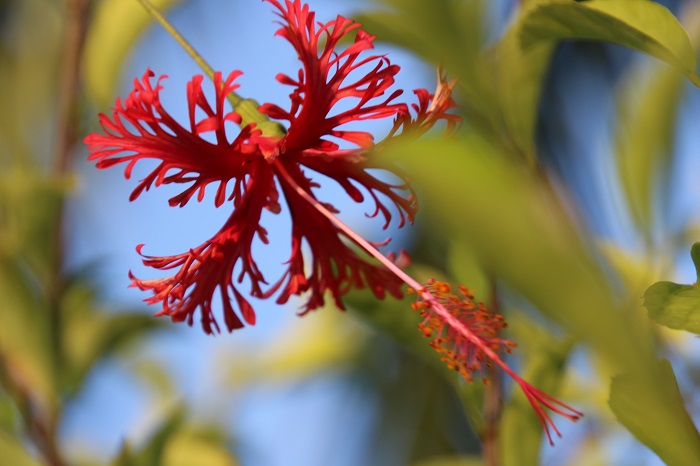 Mahi-Mahi are common in these waters and on restaurant menus.   A charter fishing boat came in mid day yesterday with a large catch.  The biggest one was over 4′ long.  Their colors are brilliant while they are alive but still pretty dramatic when they “aren’t”. 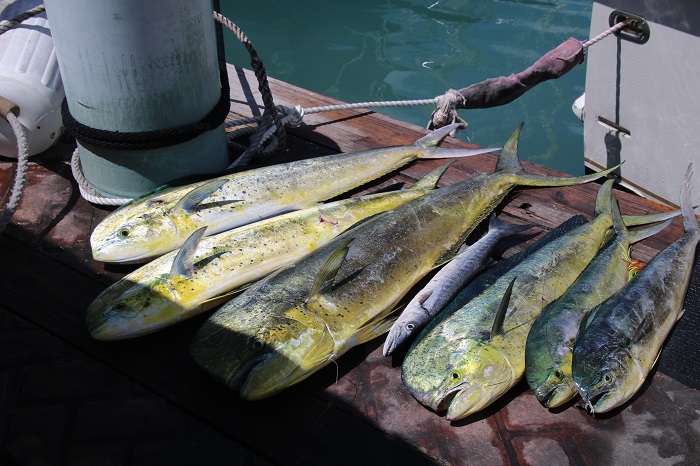 There’s a boat in the marina that has had workers swarming all over it for weeks now.  They refinished the dink that’s stored on the bow.  What a stunner, the “mother ship” is too, like a piece of fine furniture, but it’s covered with masking tape and brown paper while it’s paint is touched up so sorry, no picture. 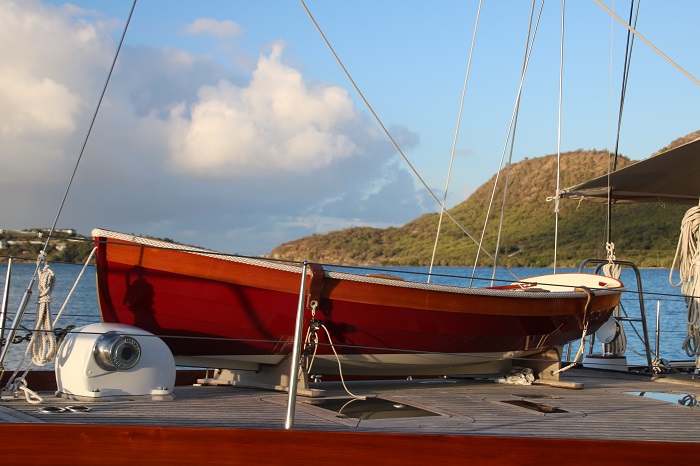 The amount of attention given to the larger boats, all of which have full time crew, is impressive.  Look at this beautiful awning to keep the sun off of all the expensive varnish.  It must take hours to put it up and remove it when they want to go sailing.  This surely suggests that this boat spends a lot of time tied up.

Note the kayak nearby on the dock, complete with it’s own custom cover.  That’s attention to detail.  It just wouldn’t do to have a garishly colored kayak on deck would it? 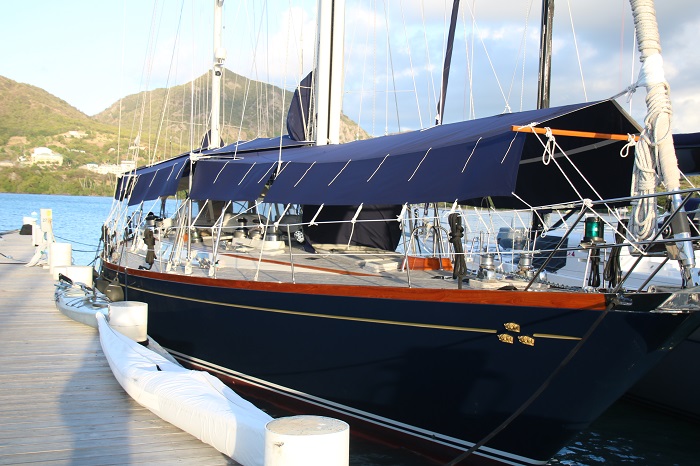 Antiguans, if that’s what they call themselves, love to paint their homes bright colors.   Even the most humble homes are painted in fun colors. 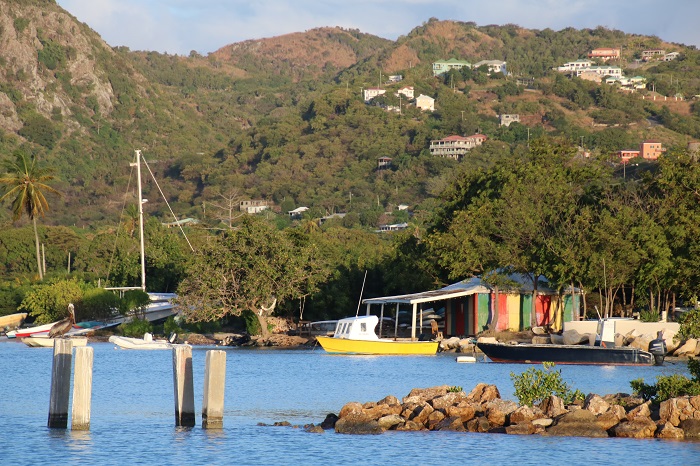 A few nights ago Brenda and I had a drink at Pillars, in Nelson’s Dockyard.  It’s a lovely spot with curtains blowing in the breeze, completing the ethereal moment as the sun set behind the hills. 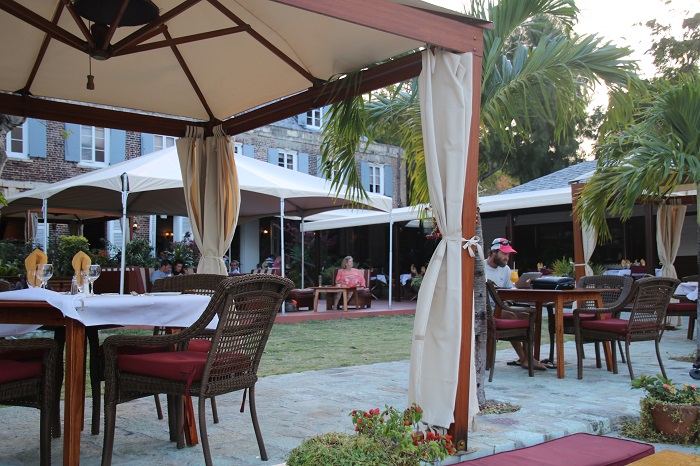 Tied up to the dock in front of the restaurant were two ocean rowing boats.   These were participants in an annual race, the Atlantic Challenge, from the Canary Islands off Africa, I think, and 3,000 miles from Antigua where they finish.   Billed as the toughest rowing race in the world, some 30 competitors SLOWLY make their way over a period of months, they left in December and it’s now March, to complete the course.  Win or loose, you win if you can make it all the way, I would think.   Talisker Whiskey is the sponsor and that’s a good thing as the competitors will surely need a stiff drink after completing their journey.

The boats are only about 20′ long and seem impossibly small to cross an ocean. 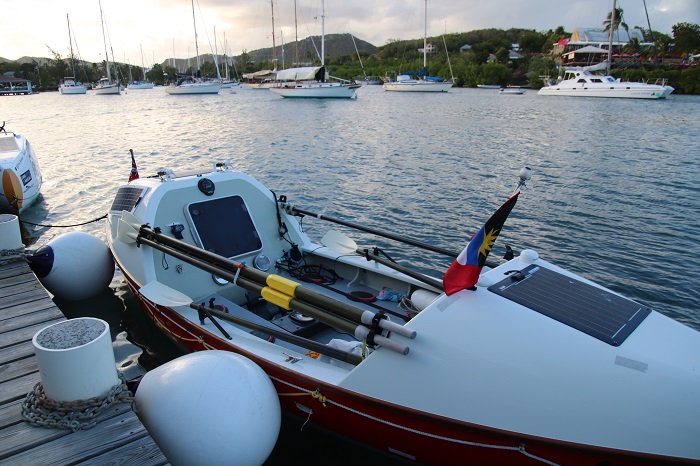 Tiny though they are, they are plenty high tech, complete with all manner of electronics and solar power.  However, you still have to just row and row and row.   And this one had photos of children plastered all over, probably as a reminder to keep rowing and not let them down. 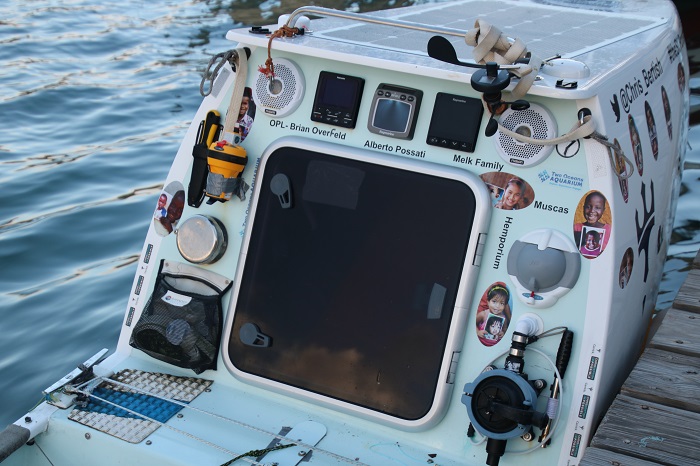 IT TAKES A VERY LONG TIME to row across the Atlantic and there were goose barnacles hanging off of the bow to prove it.  I’ll bet that there are plenty below the waterline too.  I’ll bet that really helps the boat go faster.  Not. 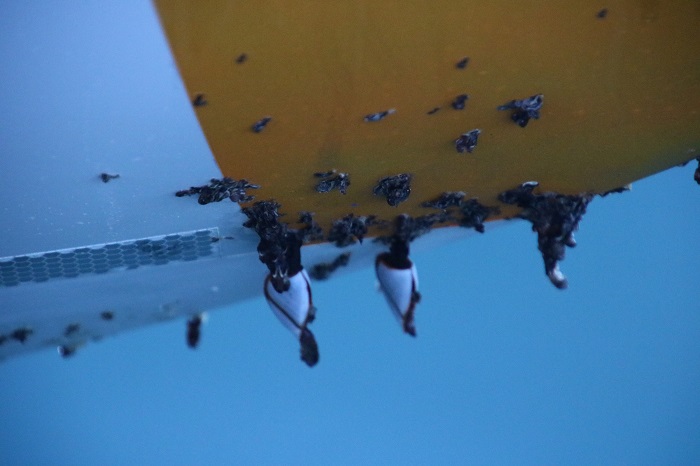 So, there you have it, some of the colors of Antigua.  However, the continuing saga of Pandora’s SSB suggests that the “color” that she’s inspiring is more “green” with the hours piling up on this job.

2 responses to “The colors of Antigua.”