The yachts of Antigua. Bring your check book.

It’s Thursday morning and we have been in Antigua for… Actually, I don’t want to think about how long we have been here as there are so many other islands to visit and we don’t have a lot of time left before I have to head back to the BVIs. However, it’s been really windy so we can’t leave.  And that’s that, for now, I guess.

Our son Christopher arrives here in less than a week and after that, on April 10th, Brenda flies home to attend a conference.  We are finding that booking a flight from Antigua to Hartford CT is tougher than we had thought.  When I did some preliminary checking on flights several  months ago before committing to have her leave from here, I looked at schedules and saw that an early morning flight from here would arrive in Hartford late in the evening.  That sounded pretty good to us.

What I didn’t realize is that a flight that left first thing in the morning arrived in Hartford late in the evening, the NEXT DAY.  These flights were not in the range of 13 hours that I thought, but more like 26 hours.  Oops.  Minor detail.  Brenda’s thrilled.  Not.

Anyway, I haven’t booked anything quite yet but it’s looking like she’s going to have to fly to Miami,  Dominica or pehaps Puerto Rico and then stay in a hotel there for a night and then fly out the next day.  There are some flights that can get here there the same day but they are in the $1,000 range, one way.   Not really practical.

It would be easy if she could fly into Newark or perhaps one of the NY airports. Hartford?  It seems that nobody wants to go to Hartford from Antigua.  Makes sense, actually.   Better than Cleveland I’d expect.

I have also been trying to come to grips with my own trip home.  The problem is that after Brenda leaves and I spend a week with my friend Craig who’s coming here to Antigua.  After he leaves I will still have about a month until my return crew arrives to bring Pandora back to CT.  I really don’t want to be on my own without Brenda for that long as nice as it is in the BVIs.

So, the plan, I think, is for me to fly home for a few weeks and the return to the BVIs to prepare to bring Pandora north.   Besides, I can fly into Baltimore and see Tori, our grandaughter.  Remember?  The cutest granddaughter EVER!

She’s excited to see her grampy. 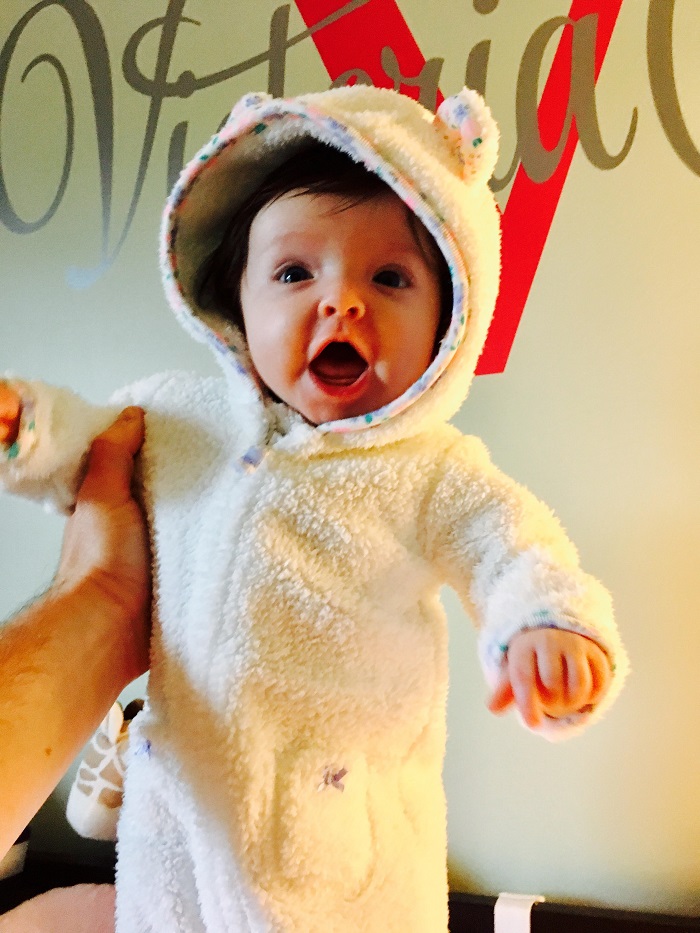 That’s all fine but the logistics of our collective travel plans is a bit overwhelming.  I guess that shouldn’t be a surprise after several decades of moving boats around.  Such is the life of land and sea.   I have to remind me that this is a lot more appealing than having the boat on the hard in New England for the winter.

So, her we are in Antigua STILL.  The good news is that there are plenty of other cruisers that are stuck here with us because of the continuing strong winds.

And, with the classic yacht regatta, and the place being a very popular place to base sailing charter yachts, so there is plenty to look at and admire.

When we sat overlooking Nelson’s Dock Yard at lunch the other day, the view included some magnificant yachts, each swarming with workers painting and varnishing. 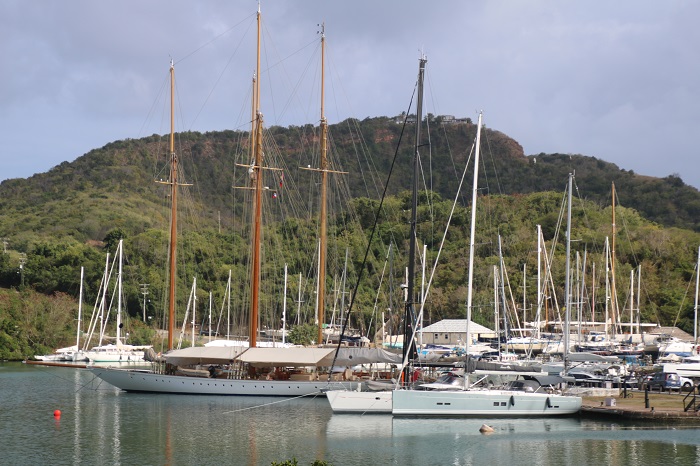 There’s two huge schooners from the UK that are right next to each other, a sort of “his and hers” deal.  Workers with brushes all over each of them getting them ready for the upcoming classic yacht races. 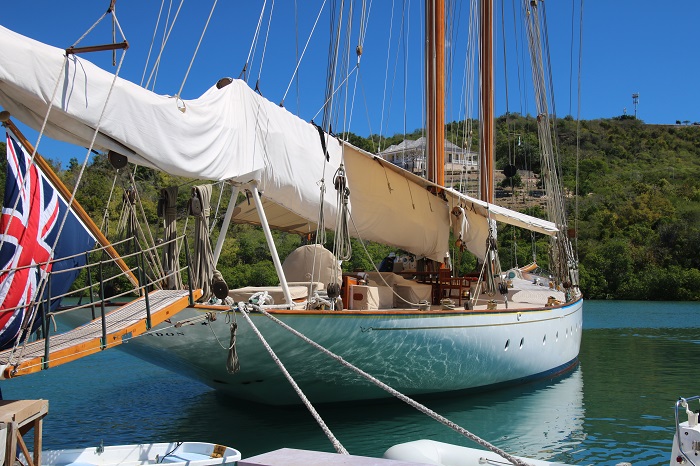 Some of the yachts are hard to actually see as they are covered with so much canvas to protect the decks and all that paint and varnish from the tropical sun. 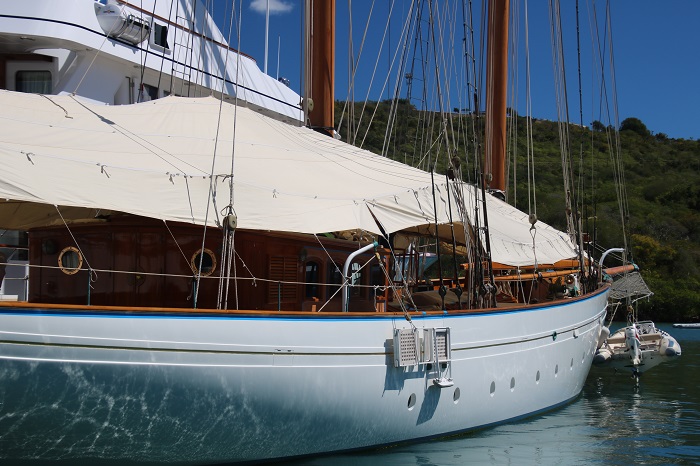 I think I used a shot of this beauty in a previous post.  However, as the “belle of the harbor” I just have to show her again.  I wonder how many crew it takes to keep her looking like this? 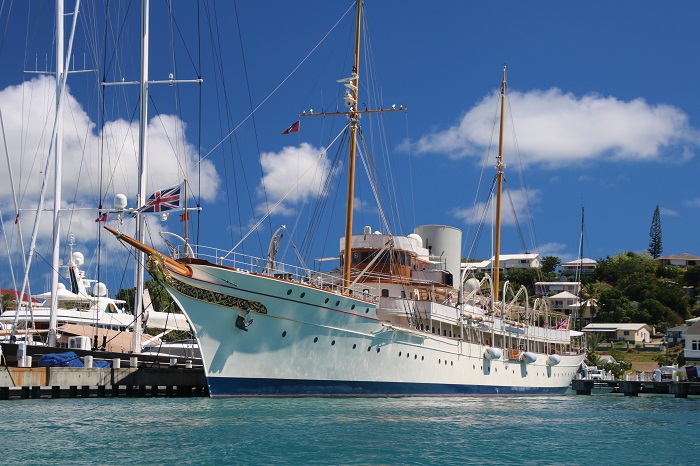 Not all of the yachts are not classics but many are.   This one, complete with a serious looking flat black hull sported it’s own chopper. 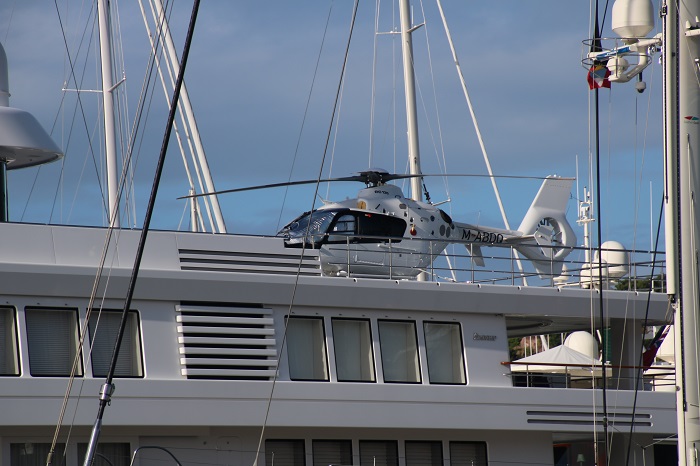 I thought that this was an interesting boat.  The companionway is unique.  I expect that the dodger wasn’t part of the original design.   And, not even a tiny bit of varnish to look after. 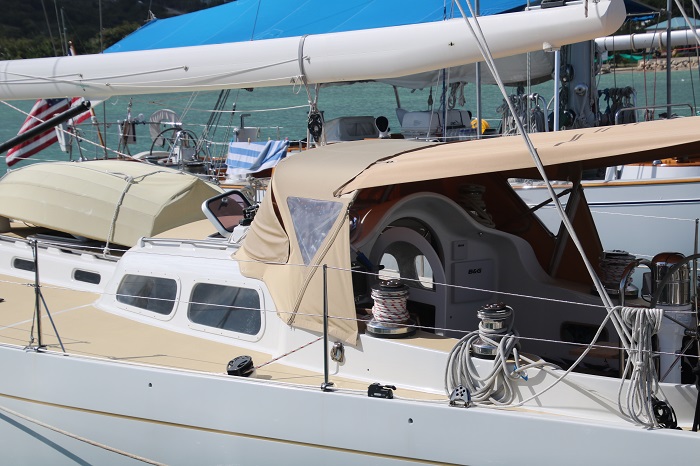 No varnish on this racer either.   I’ll bet she screams on a reach and is really noisy with a tooth jarring ride. 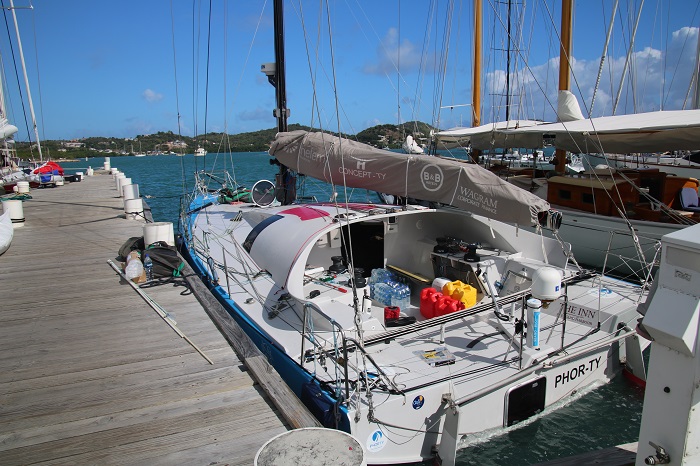 This yacht looks like it can go just about anywhere with it’s wave piercing bow. 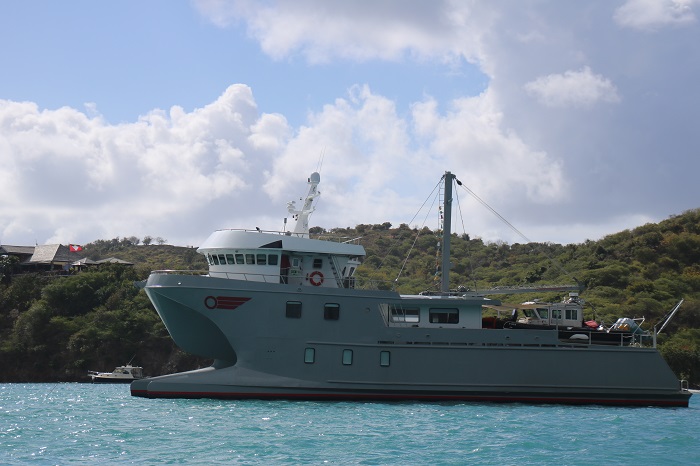 Nice dink.  No getting wet when crossing a choppy harbor in that. 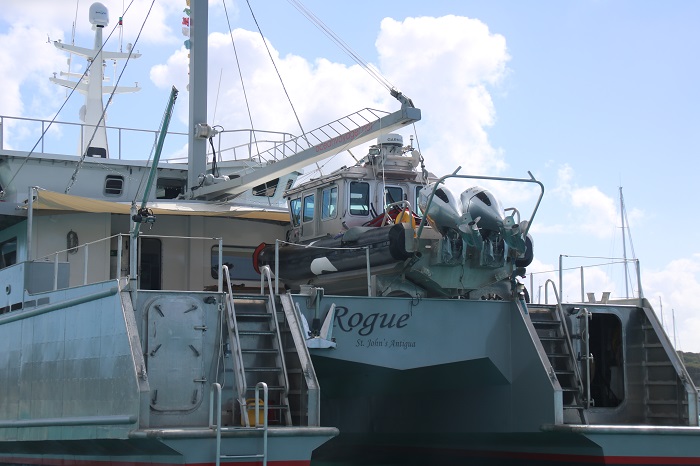 Not your usual bow profile.  Surely she can go into most anything without slowing down. 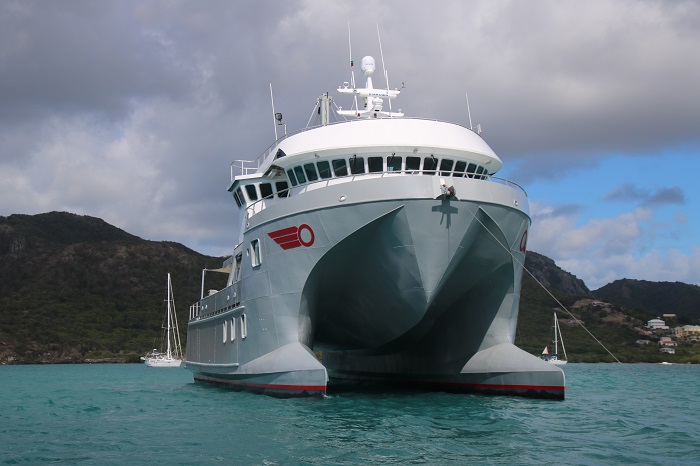 And, speaking of bows.   Many of the classics sport enormous overhangs. Especially the classic America’s Cup Js from the 30s.  This is Ranbow.  She’s actually not original but was launched just a few years ago from the original plans.  And, she, like all the Js sailing today, sports carbon spars.  Beautiful. 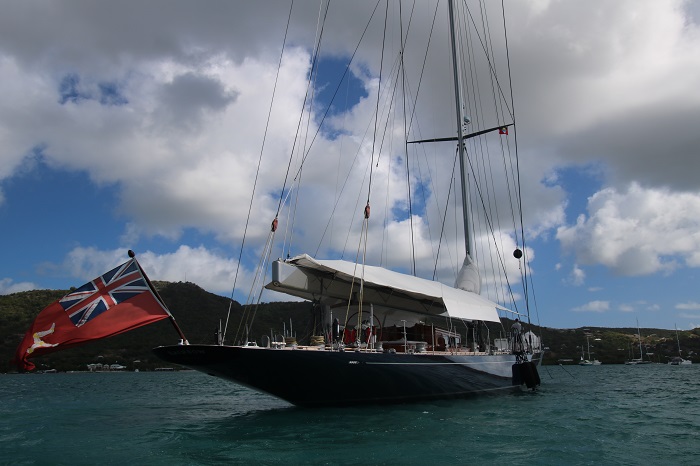 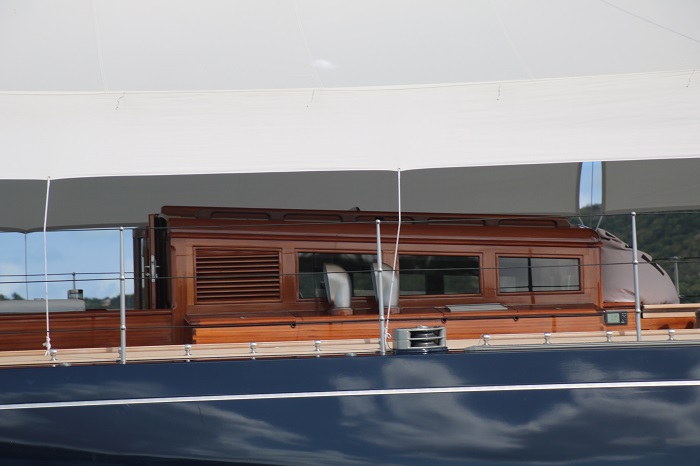 There’s something like less than a dozen of these classic J yachts in the world today.  However, there are more now than in the 30s, when they raced for The Cup.  Several have been recently constructed to original plans drawn and never built.  Of course, they raced during the Great Depression.  It’s interesting that several more were also built during the recent Great Recession.   Says something about the rich getting richer.

Not certain which one this is.  I think Lionheart.  It’s just so hard to keep them straight.   So many Js to choose from and most of them are here in Antigua right now.   Imagine the spinnaker that uses that pole? 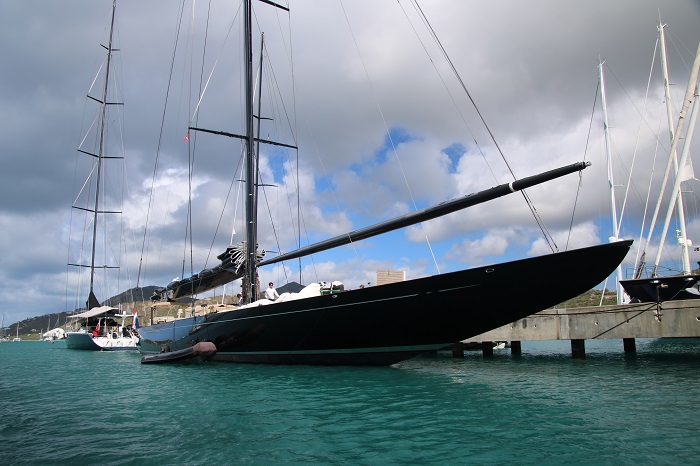 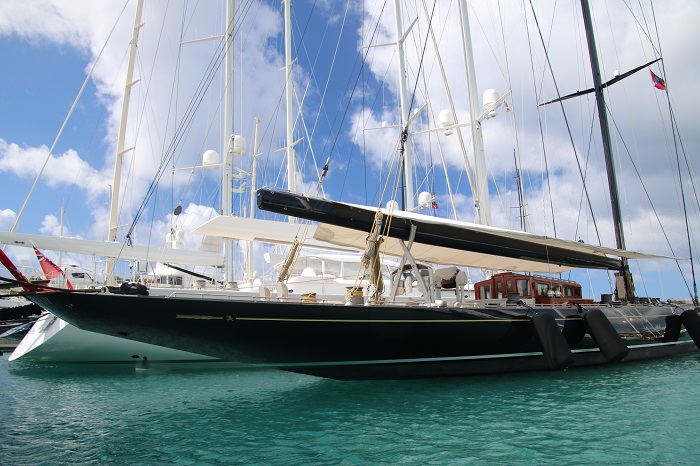 Not all of the big sailing yachts are Js but they all sport those lovely lines. 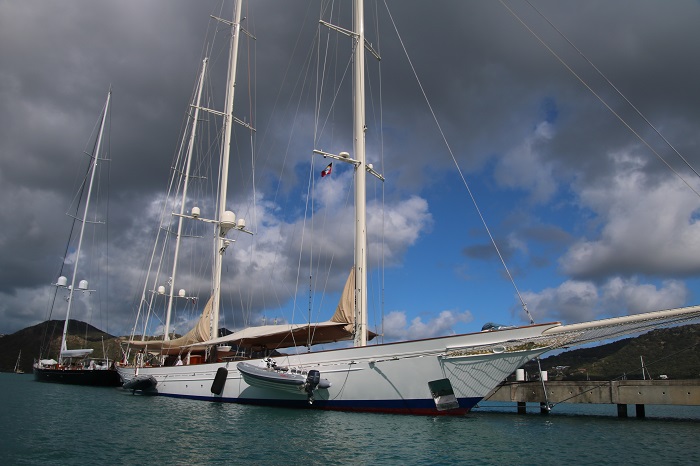 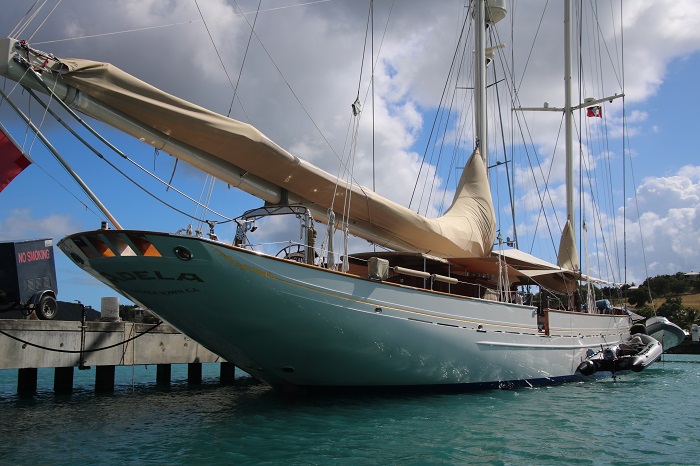 Interesting bimini.  Perhaps not all weather but hey, the owner isn’t going to be slogging to weather in a gale.  That’s the job of the crew. 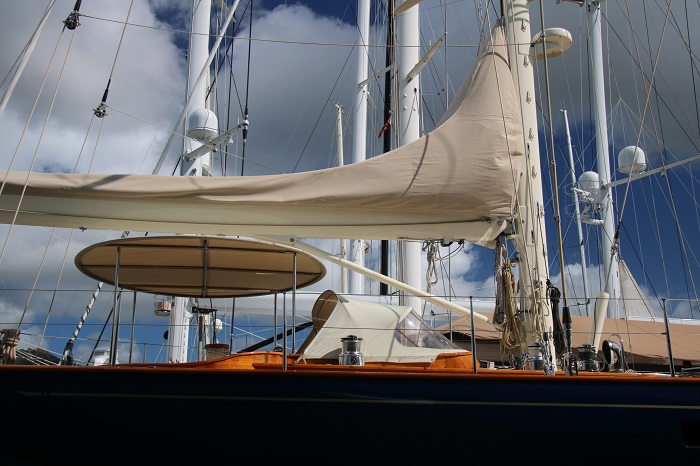 This beauty spends her summers in Vinyard Haven.  I’ve seen here there.  She was built by Gannon and Benjamin a few years ago, right in that harbor.  She’s also down for the regatta. 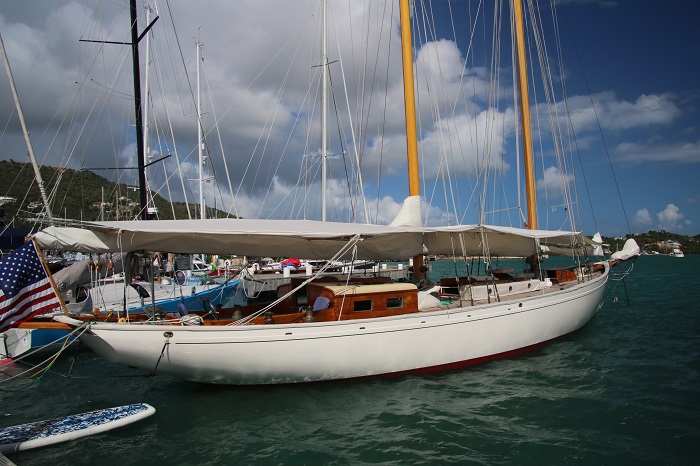 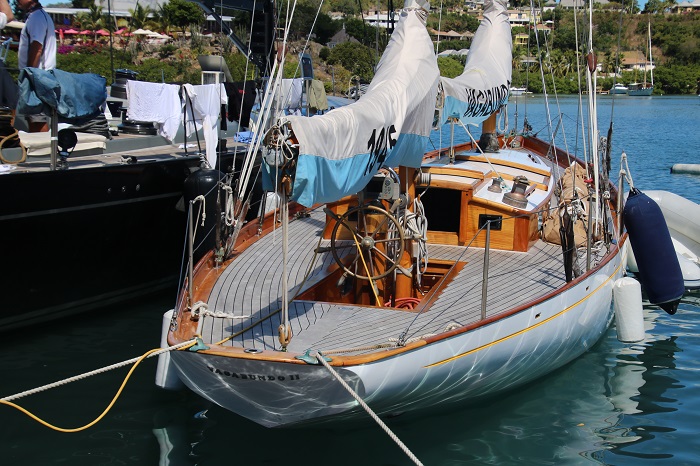 Well, I guess that’s enough “eye candy” for now.  It’s time to make the coffee.  After looking at all of these magnificant yachts, perhaps I’ll have a cappuccino.  I do so wish that I had a steward to fetch it for me.   James, James!  Is that you?  “No, you idiot, it’s the wind.  Make your own d%$# coffee.”

Oh well.  No steward.  However, I will have the electonics guy on board today or soon to finish up on the SSB install.  Let’s hope that it works as my trip north is coming up fast and for the moment, it’s the ONLY thing that’s not working properly.  However, I don’t want to jinx it…

Heck, it’s only money and pennies, no make that fractions of pennies on the dollar compared to the rest of the yachts in the neighborhood.

Yes, Antigua.   Beautiful sailing yachts and plenty of them.   Bring your check book.

One response to “The yachts of Antigua. Bring your check book.”