Cricket: It’s not was just a bug. Who knew?

It’s been a few days since my last post but I have been busy doing, well cruiser stuff.  No, I have not been doing boat repairs as I am still waiting for the power supply for my SSB radio which should be on-island today and hopefully in place by tomorrow.  At that point I’ll know if it’s going to solve my communication problem or if there is something more fundamentally wrong with the installation. I hope it works as I really have to have it working for my run north in May.

The forecast calls for strong winds over the next few days which is also why we are still here in Antigua instead of a bit further south in Guadaloupe, an island that we had really hoped we’d be visiting on this trip.   Perhaps after our son Christopher visits next week.

Alas, being stuck in Antigua isn’t all that bad as there is plenty to see and there are lots of other cruisers who are stuck here too.  Being the social animal that I am we get together for cocktails and evening domino games some nights.  However, because of the strong winds that’s keeping everyone from moving on to other islands, there is a growing number of “landlocked cruisers” looking for socialization as well.  That’s good.    We met at a local bar the other night.   Is it still windy?  Let’s have another rum punch. 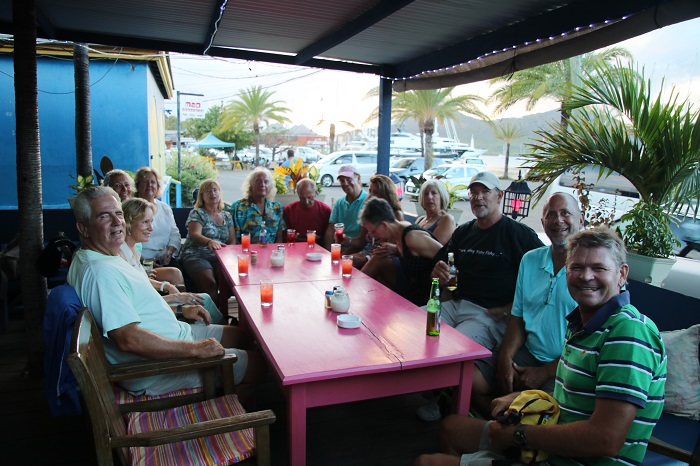 I mention this because cruisers, bound together, or pinned down, as it were, by common experiences are very supportive of one another.   In our case, Nick and Lori-Anne on Wreckless Faith, gave us two tickets to a Cricket match that we went to on Sunday.    So, we went.   How’s that for a segue?

Have you ever been to a Cricket match?  Not me…

So, what’s Cricket anyway?  I had not idea and thought that it was something related to a bug, like this one that I spied on a flower yesterday.     A beautiful “bug” but alas, not Cricket. 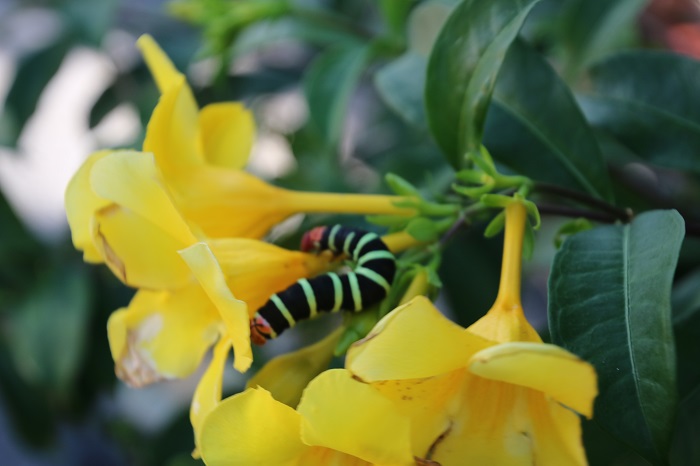 We arrived at the stadium with absolutely no idea what to expect.   The place was huge and jammed with enthusiastic “cricketeers” rooting for their teams.  The “home team” West Indies and the other England.  As Antigua was once a colony of England, I was wondering if it was a “grudge match” but while there were plenty of fans from both island nations, it was a friendly crowd.  And, there were lots of them. 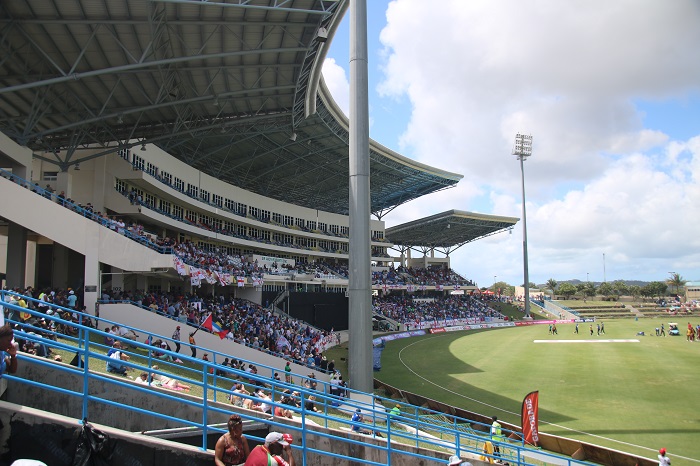 We had great seats right behind “home wicket”, if that’s what you’d call where we were.  Across the circular field, and it was a big one, another set of stands. 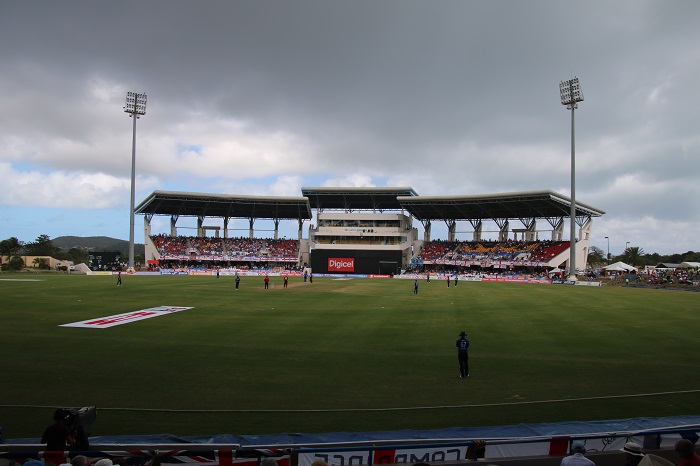 The tickets said that the gate opened at 07:30 but we didn’t arrive until mid morning.  The game was in full swing with lots of action on the field.  The score board said… 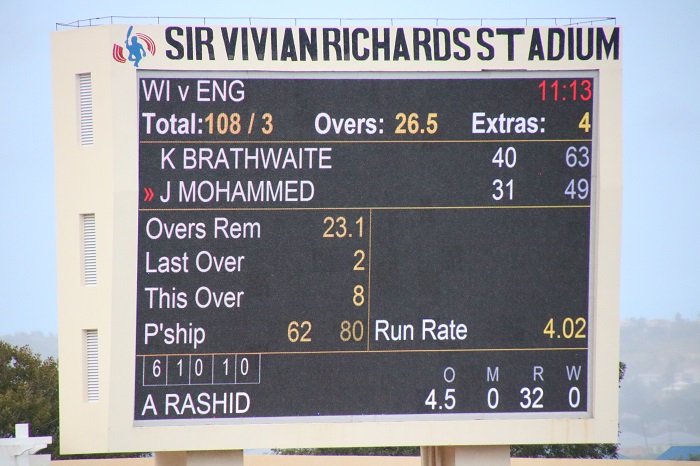 Actually, I had absolutely no idea what it said.  What in the world is a P’ship? Or an Overs Rem?…   As luck would have it, there were two very British looking gents sitting right in front of us and when prompted, happily agreed to help us better understand what was going on.   However, I still have no idea what a P’ship is and based on their answers to my questions, it takes years to really understand the game.  Forgive me, but that just sounds so British to make up a game that is impossibly complicated.

However there was a nice breeze and we were happily sitting in the shade on a beautiful Sunday afternoon and even if I didn’t understand much about the action in the field, there was plenty to watch in the stands.

Pop quiz… which team do you think this guy was rooting for?    When I see a “fan” like him the first question that comes to my mind is what is it like when he goes on a job interview.    “So Mr. Woodhouse, tell me a little about yourself.  What sorts of hobbies do you have”? 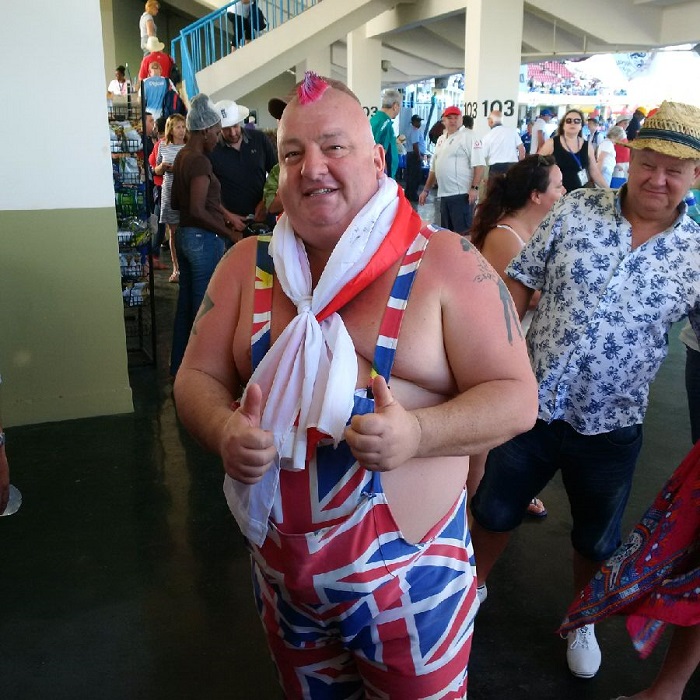 Brenda and I were entranced by this beautiful girl with her painted face.  A little different view to be sure.  GO WEST INDIES! 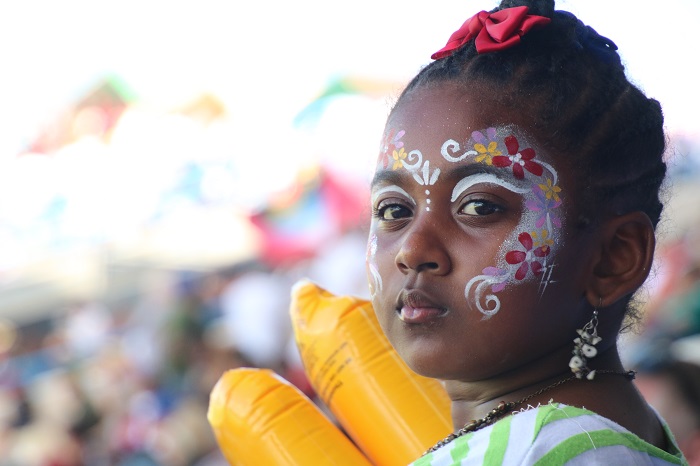 I’ll show you a few photos of the action, and there was plenty.   This is what a “pitch” looks like.  Very fast with the ball going toward the batter at close to 100mph.   The guy in blue is the pitcher, and he puts everthing he has into thew windup for the pitch if that’s not completely clear. 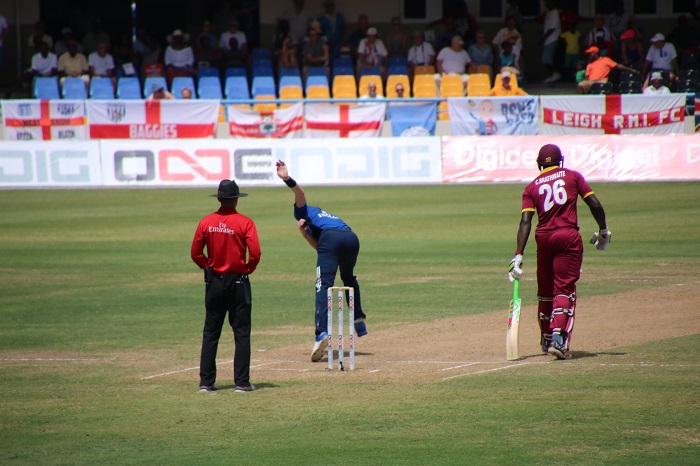 And, not 50′ away is the batter on the receiving end of all that power.  He has to be very, very fast with his reflexes with the ball screaming toward him. 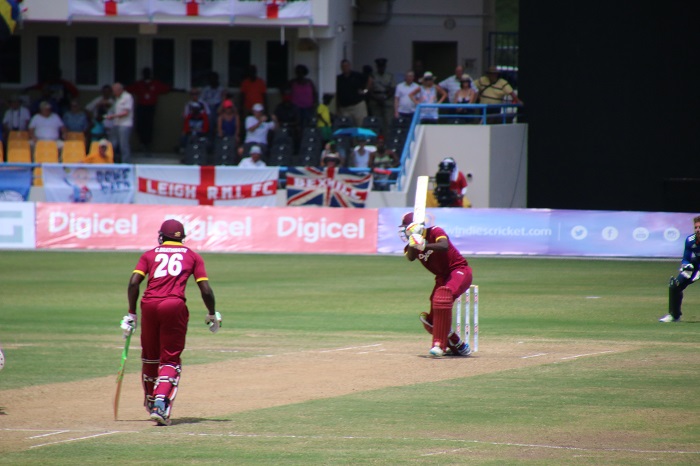 The white “frame” behind the batter is actually called a “wicket” but that’s about all I know.  And one of the many, many objects of the game and the game lasts something like 8 hours if you can believe it, is for the pitcher to hit the wicket with the ball while the batter tries to hit the ball beyond the “rope” that is laid on the ground in a huge circle around the field.   Got it?  Good.

Half time was fun to watch as there were literally dozens of young cricket players out on the field chasing balls around.   They even had “Chirpy”, their own mascot. 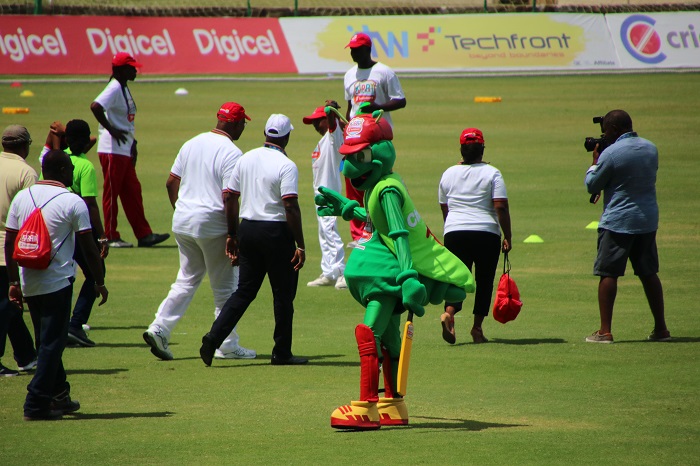 Trying to come up with something witty to say about Chirpy but just can’t.  It’s just a grown man dressed up as a giant green bug suit.

We had a great time and enjoyed the game, what little of it we even remotely understood.  Complicated or not, the game is a very big deal in Antigua.

I guess we only scratched the surface.  Remember that you have to watch the game for a lifetime and only then can you really understand the subtle nuances of the game.

Isn’t that just so British?  Don’t forget that their neighbors in Scotland invented Golf, another diabolically complicated game that takes hours and hours to play and a lifetime to master.

So, another reason to visit Antigua and now I know that shouting about Cricket doesn’t always lead to a frantic call to an exterminator.

One response to “Cricket: It’s not was just a bug. Who knew?”