>Guy’s weekend aboard Pandora in Annapolis

>My son Rob and I were joined by our good friends Joe and Luke for our “annual Guy’s Weekend”  in Annapolis aboard Pandora.  On Thursday evening we rendezvoused, arriving from NJ, CT, NYC and Pittsburgh to spend a few days together aboard Pandora and see some of the sights of the Chesapeake and Annapolis.   Unlike some past years when we have faced rain and challenging conditions, this weekend had really terrific weather.  On Thursday evening we had dinner aboard with the plan of heading out the following morning.  The weather patterns for the weekend called for moderate to strong SW winds on Friday followed by a shift overnight to fresh NW on Saturday.  With this in mind, we headed out on a reach to Rock Hall on the Eastern Shore, a much different, and decidedly slower pace than near Annapolis.  We dropped the hook around the corner from Rock Hall Harbor in Swan Creek.

After we arrived, we headed for shore and rented bikes.  This marina just past the mooring field in “The Haven” was a very nice place to get ashore and for $5 each we headed out to explore Rock Hall.   This is a nice shot of the Club House at the marina. 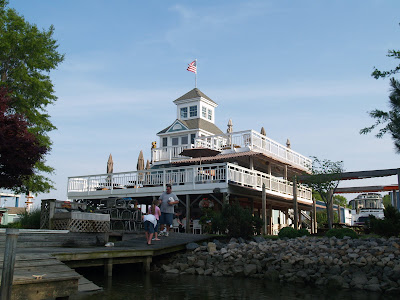 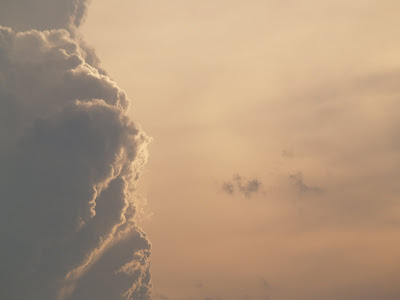 As predicted by the weather service, which called for 50% chance of thunderstorms, we were treated to a fantastic light show from the passing cold front.  This shot of the growing thunderhead to the west was a clue as to what would happen next.  Later in the evening we were hit with some pretty impressive gusts, enough to knock everything that wasn’t secured onto the floor.  I would guess that the brief gusts were upwards of 40-50kts. It was impressive but brief lived.  It’s a good thing that we have a big anchor, a 65lb Bruce and lots of heavy chain.

With a strong NW wind the following morning we headed out to Annapolis.  Our trip was quite lively as the wind increased to a gusty 15-18kt breeze and hard on the wind we blasted along, sometimes as fast as 8.5kts, nearly 10kts with the ebbing current, our way toward Annapolis. 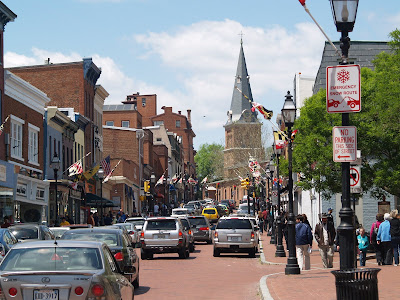 Annapolis on a busy Saturday is quite a scene and this visit wasn’t any different.  A view up Main Street gives you a feel for how crowded it can be. 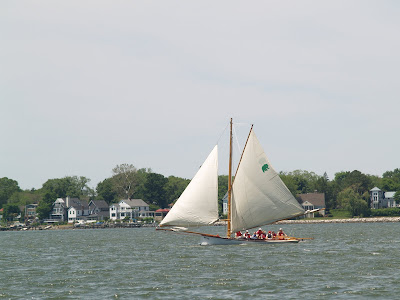 The harbor and out into the bay has all sorts of craft but it’s always busy.  This boat is a sandbagger, one of two, Bull and Bear.  These two identical boats are owned and campaigned by a wealthy New York financier who fancies wooden boats.  He supports these boats, in partnership with The National Hall of Fame and Sailing Center, as they are trucked around for various events. I am told that moving these around is quite an operation.  They are wonderfully maintained and quite impressive.   The program is designed to help expose young people to sailing.  Bull and Bear have a very nice website where you can learn more about these wonderful boats. Perhaps you can even find a way to get aboard for a sail.  Not a bad idea. 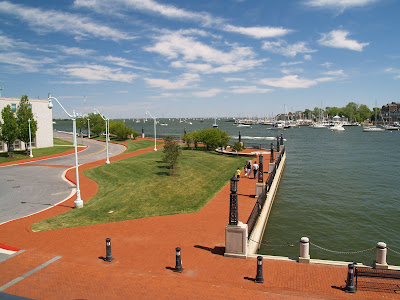 We also decided to spend some time walking around the Naval Academy and I have to say that I was impressed with how wonderful the grounds look.  It reminded me of the Naval College in Greenwich England.  I expect that the founding fathers were trying to say something about the young United States by evoking the look of a similar institution.  And, to this day, your tax dollars are hard at work.  What a view of the harbor. 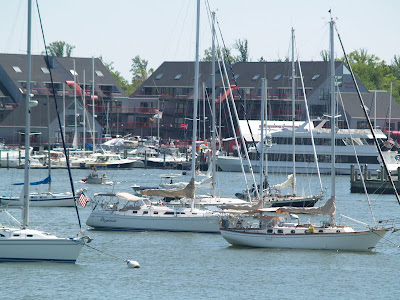 And, what’s a view of the harbor without a shot of Pandora on her mooring? 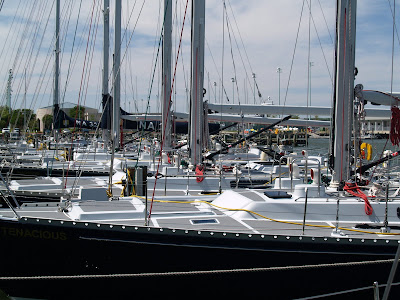 And a shot of the Academy 40 footers, that they race on the bay and further away.  These are not cushy yachts at all.  They are beefy and powerful in every way. 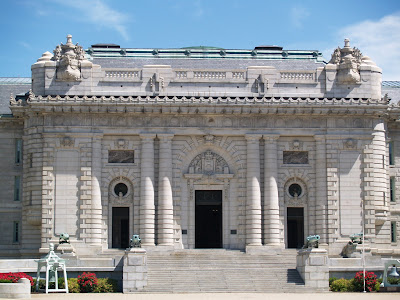 The buildings on campus are quite amazing to see.  No denying that there is European influence here. 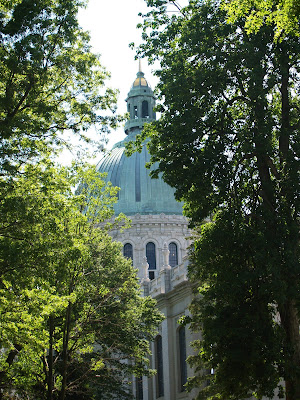 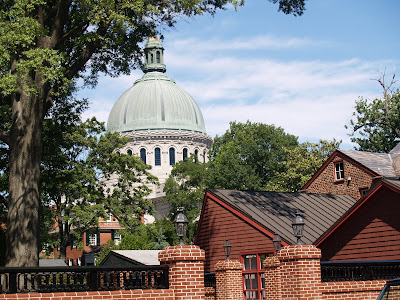 Several views of the dome on the chapel where John Paul Jones is entombed. 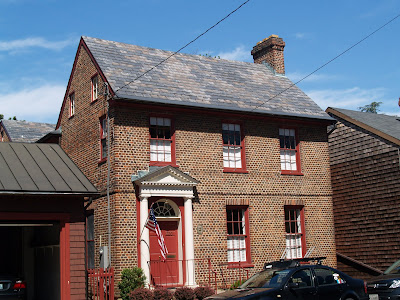 One of the many wonderful old historic homes just outside of the Academy walls. There’s lots to see in Annapolis and no shortage of folks doing just that.