The sun is just peeking over the horizon here in Falmouth Harbor here in Antigua and it’s going to be a beautiful day.

We arrived here after dark on Tuesday after making the 85 mile run from St Barths.  It was a very lumpy run but compliments of a large cold front, the wind was from the west and behind us all the way.  Brenda wasn’t too pleased with the lumpy conditions nor were Bill and Maureen aboard Kalunamoo who also made the run but at least the wind was behind us the entire way.

The harbor in St Barths is very exposed to the west, as are most harbors in the Caribbean, so when the front arrived just after midnight on Tuesday morning, the wind clocked around and all the anchored boats found themselves on a lee shore.  The inner harbor is very tight there and it’s full of mega–mega yachts that spend much of the winter there.

Anyway, as the wind shifted things got pretty chaotic in the anchorage with a number of boats dragging their anchors.  Fortunately, we didn’t have any boats close to us behaving badly although it became quite rough.  Our plan was to leave the harbor about an hour before light so I was up for a number of hours before our departure keeping an eye out for “visitors” dragging down on us.

Around dawn a squall came through bringing with it heavy rain and gusty winds but after that finally passed we got underway for Antigua.  I stayed up from about 01:30 on so I didn’t get much sleep.

Our run to Antigua began with light westerlies and we were pretty comfortable motor sailing along.   A few hours into the run I noticed a number of big boats approaching from the west with spinnakers up bearing down on us and soon realized that they were competitors in the Caribbean 600, a popular distance race that begins and ends in Falmouth harbor, where we are now.

It was an amazing sight to see these boats, many with familiar names like Rambler 88 and ICAP Leopard bearing down on Pandora in the early morning light.  As they approached, the view was spectacular with Saba framed in the distance by billowing clouds. 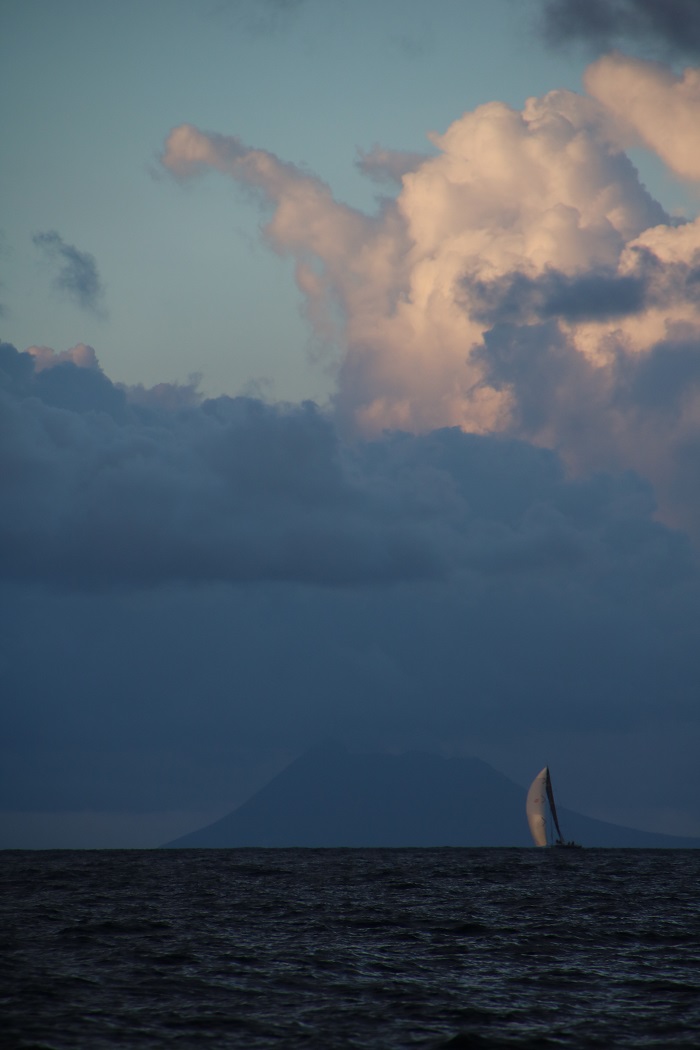 The first to pass us, Green Dragon, was sporting the Volvo Ocean Race logo on it’s bow. 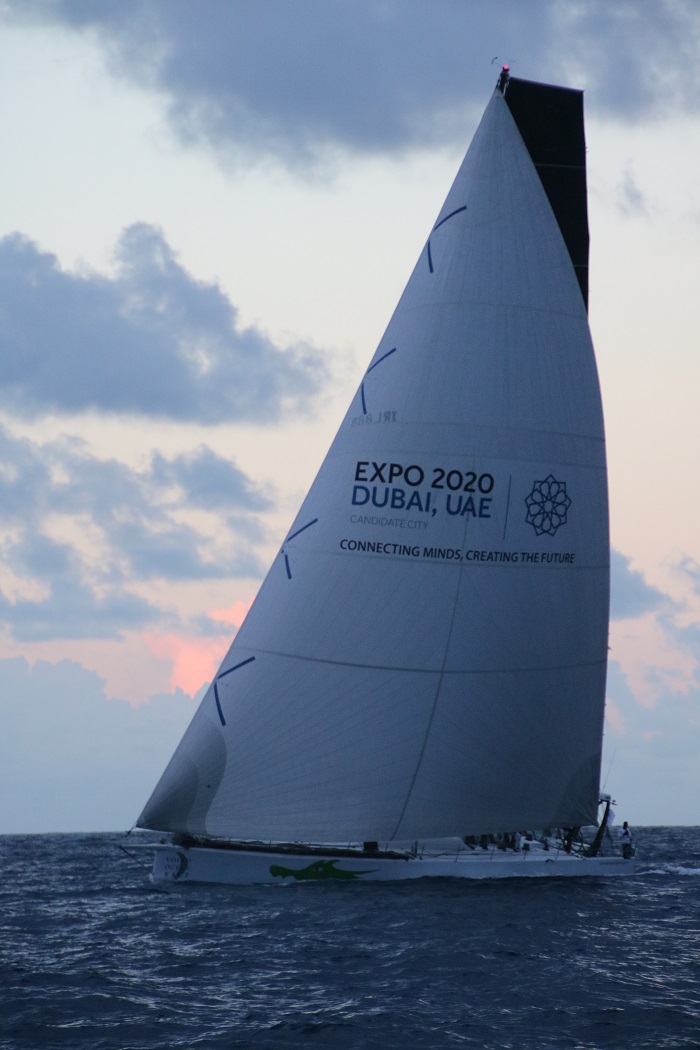 They were very close as the passed our bow at double digit speeds.   I waved to the crew on the stern.  The helmsman looked uber serious. 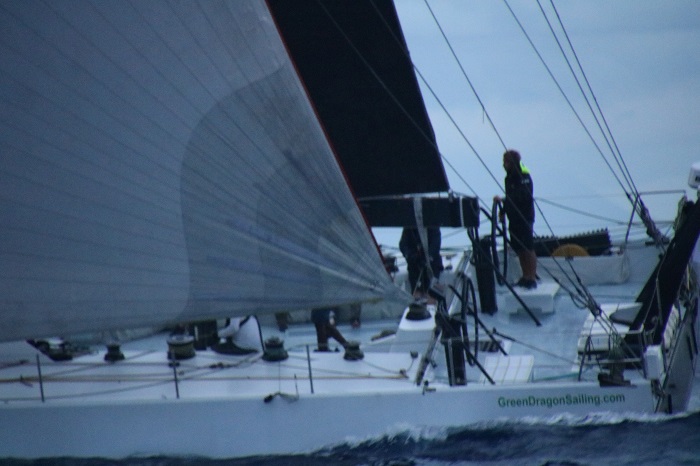 And then they were gone. 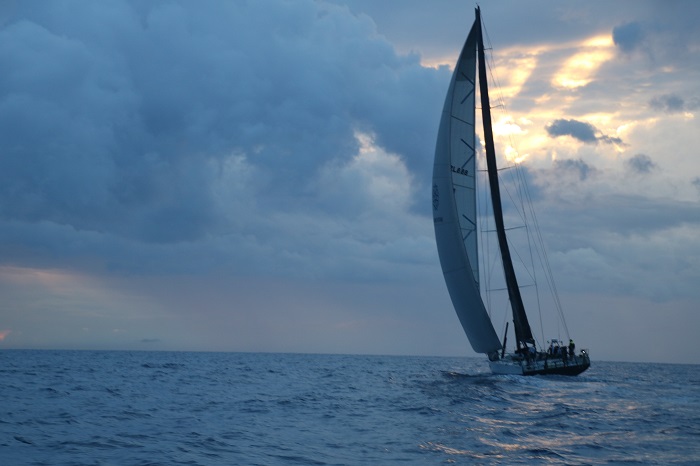 The view of these powerful machines in the early light was something to behold. 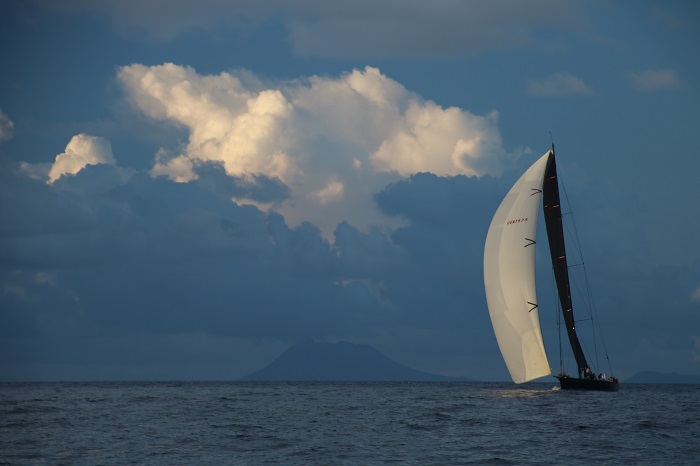 To see boats like this on the ocean and have them come so close isn’t something you see every day.  I’ll bet that even the most jaded owner would be interested it this shot of his boat. 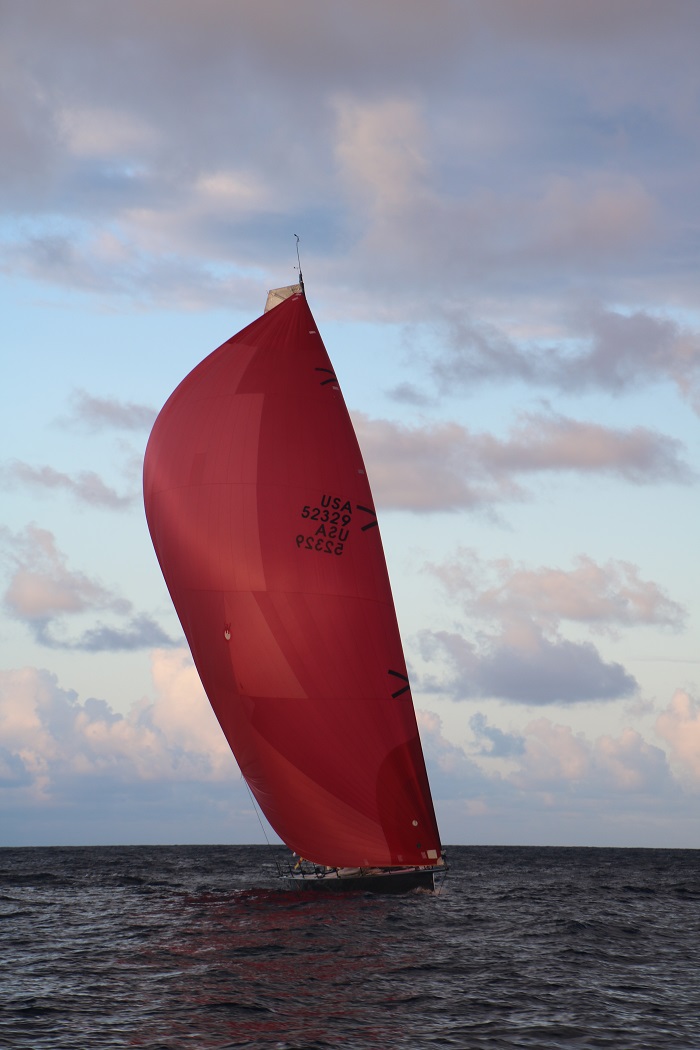 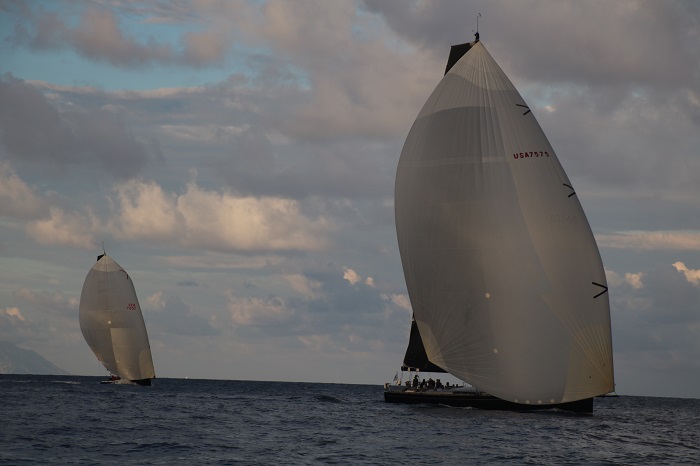 They were this close. 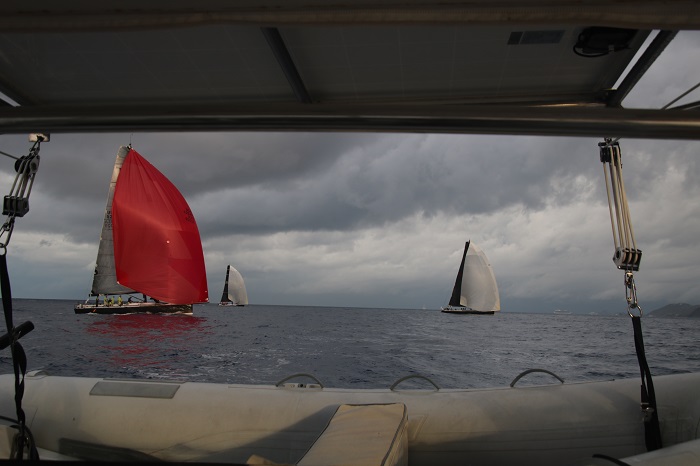 So, after about 13 lumpy hours at sea,  “Are we there yet?”, we finally arrived in Antigua. 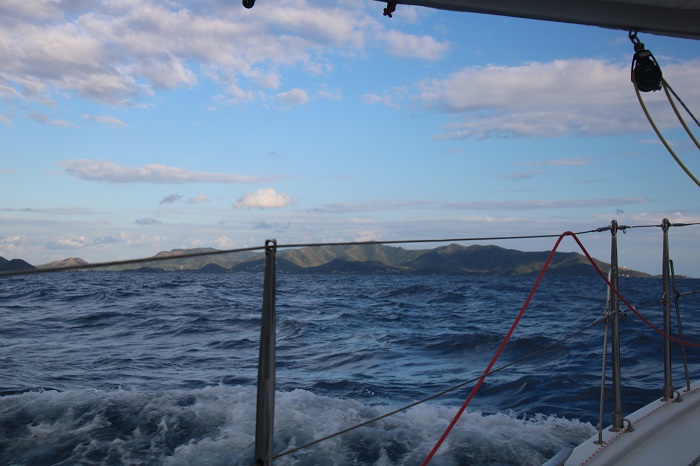 Yesterday, after a day ashore here in Falmouth and English Harbor, we passed Rambler 88 and ICAP Leopard, now tied up at the marina. 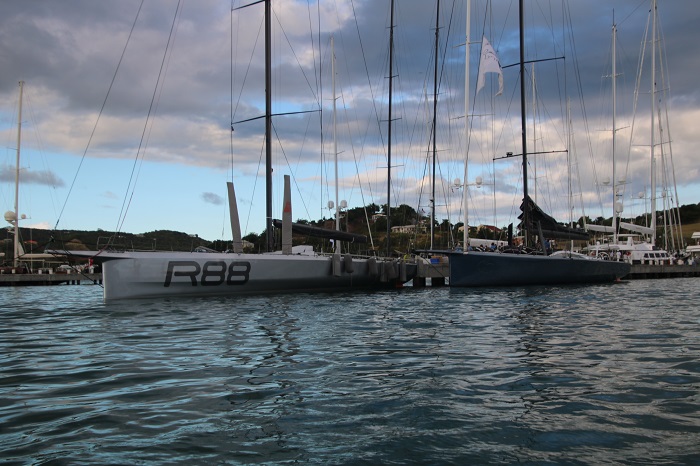 A few years ago I saw Leopard off of Newport and the last time I saw Rambler 88 she was in Palm Beach last year with her predecessor Rambler.   I wonder if the owner of Rambler 88 still owns both of the boats.   That would likely be less painful for him than mere mortal boat owners like me.

Boats like these are campaigned all over the world and huge containers of gear are shipped, along with them, from race to race.  And don’t forget all those crew. These are the really big kids of the racing world.

A short walk from Falmouth Harbor is English Harbor, home to Nelson’s Dock Yard, the ancestral home to the British Navy back when Europe’s major sea powers were duking it out here in the Caribbean.  This well protected little harbor has been beautifully restored. 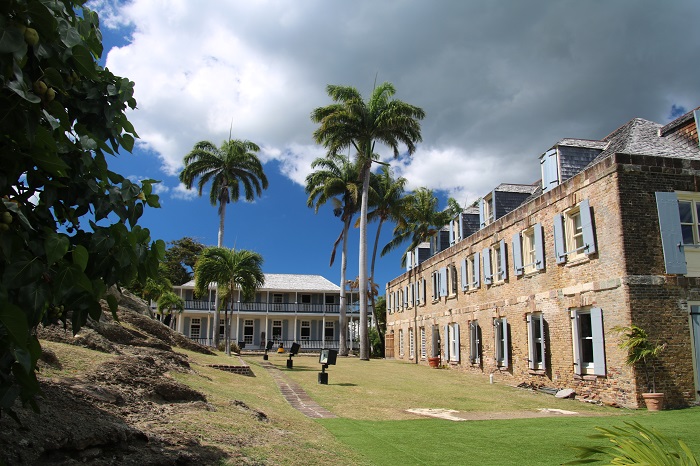 The waterfront is chock full of magnificent yachts from all over the world. 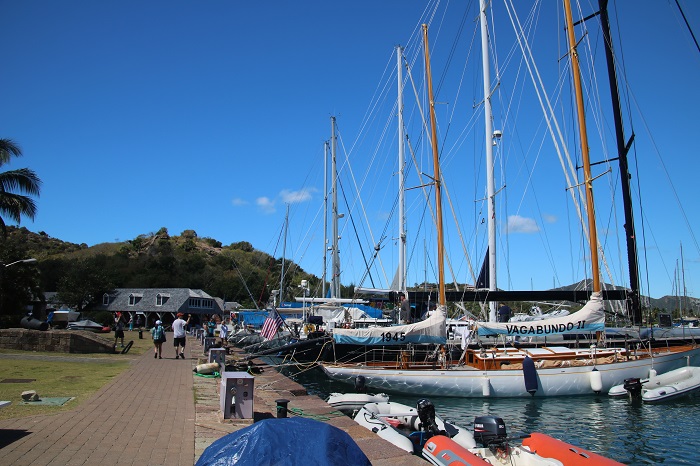 I expect that the dining is far better now than back when Lord Nelson was hanging out here.  However, I am afraid that even now, it can not hold a candle to the French islands.   “Can I have a baguette?”  Sorry, no such luck.   It’s more like “wonder bread”, a sort of “I wonder how they can even call this bread”, sort o bread.    However, it is served in a very lovely setting so that has to be good for something.  Right? 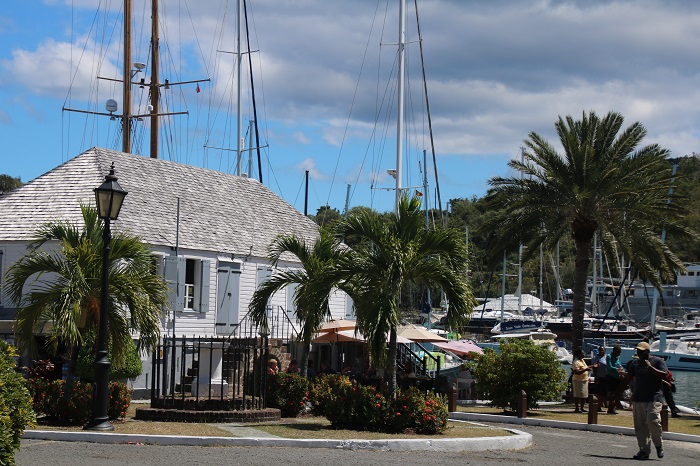 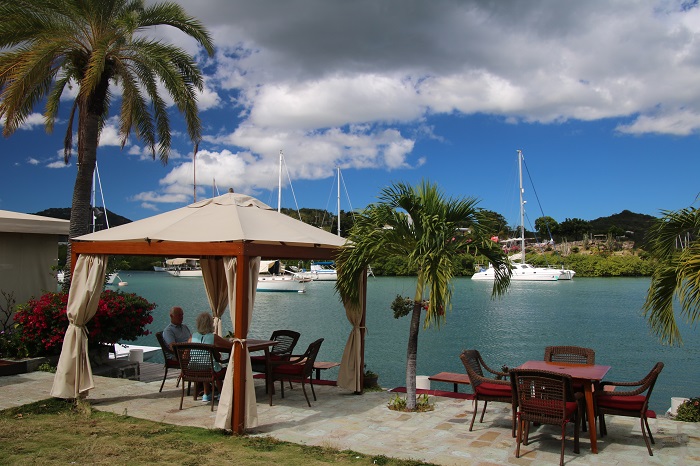 One particularly nice thing about the area is that there are “appropriate” businesses in the restored buildings.  Even the old sail loft is now an actual sail loft repairing sails. 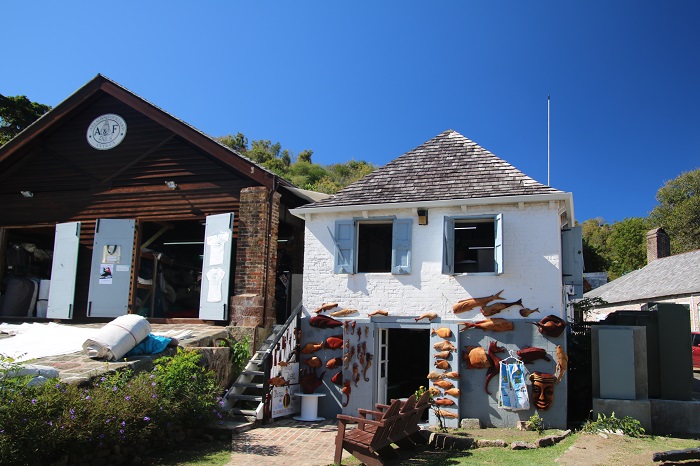 The ruins of the sail loft on the waterfront is now a nice inn and restaurant. 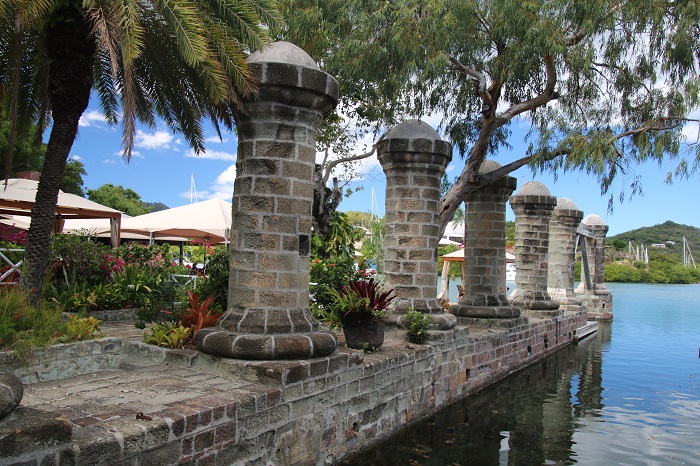 I doubt that Lord Nelson was able to enjoy afternoon tea in a spot quite this nice. Brenda and I plan to do just that when our son Christopher joins us here in a few weeks.   Well, we hope he will be able to get away from his job and come here.  Fingers crossed.  “Chris, are you reading this?  Come see your mother!” 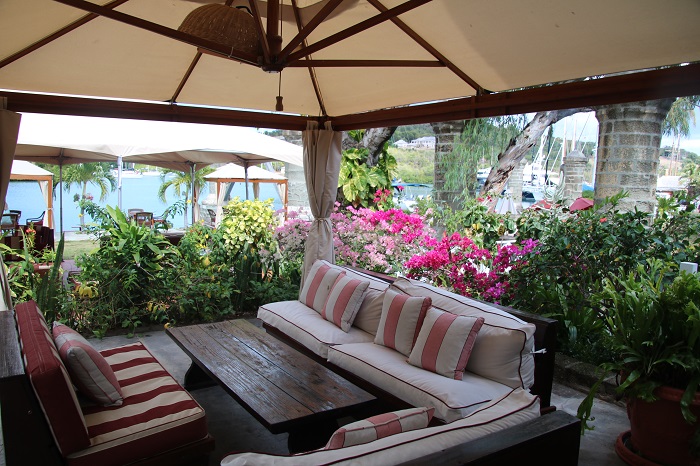 I wonder if Nelson stood here to have his portrait painted way back then.  No, I expect that the tree wasn’t nearly as impressive back then although I am sure it was there overlooking the entrance to the harbor. 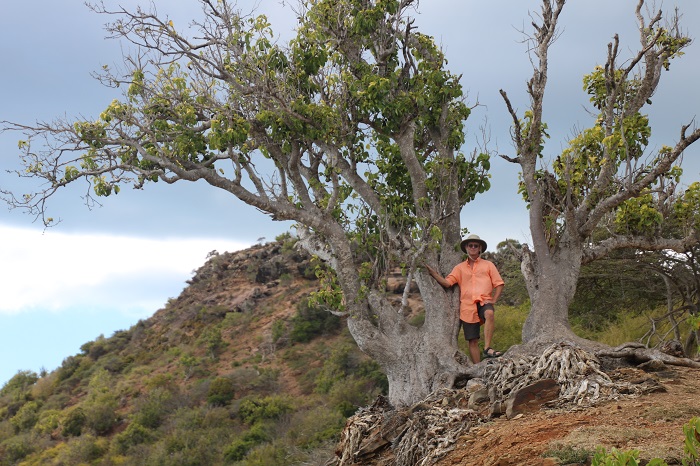 All and all, this is one of the most interesting places that we have visited yet and we have been told that, as you head further south, it just gets better and better.

Last night Brenda and I, in deference to the island’s British heritage, of course, sat up on Pandora’s bow, Gin and Tonic in hand, and toasted to the sunset.  The view of the marina in the distance was beautiful in the evening light.  It was almost as pretty as the view of the CT River from the deck at the Essex Yacht Club back home, actually.   Almost… 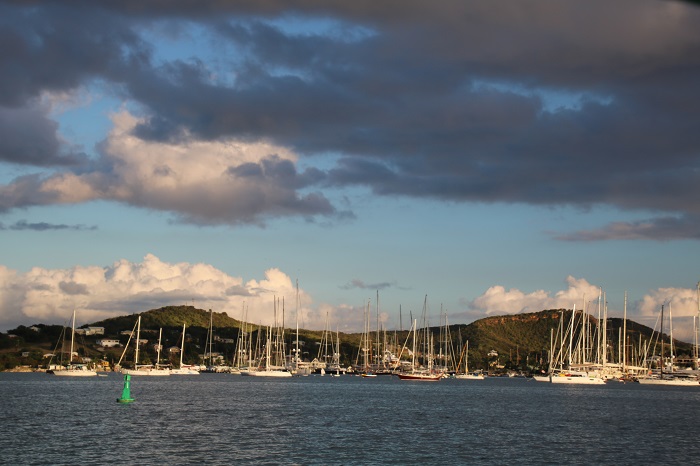 Well, it’s a short distance to a number of other wonderful islands so perhaps over the next few weeks we may visit Nevis, St Kitts, Guadeloupe, Montserrat, The Saints or perhaps another island who’s name escapes me right now.

Good news! Some islands are French so there’s hope that we will find good bread again.  I can’t wait.

One way or the other, wherever we go, these islands are steeped in history and I am looking forward to learning more.

4 responses to “Antigua, steeped in history.”