It’s mid February and we have now been aboard for about two weeks, the amount of time it generally takes for me and Brenda to settle in once we”ve moved aboard.    It’s also about how long it takes to decompress from the pressures of the holidays and “land”.    Since our really annoying passage from the BVI to St Martin we have enjoyed both the Dutch and French side as well as a short side trip for a few days in Grand Case.  I talked about that spot in my last post but it was just so lovely that I have to share a few more images of our visit to that lovely town, home to the largest concentration of French restaurants on the island.

But, before I get into it, this is the view that greeted me this morning as I put the coffee on.  What a beautiful way to begin the day.   Actually, that was yesterday’s sunrise, but I wanted to use it so let’s just make believe it was today.  Not to put too fine a point on it but it was dark when I got up today but a view, very similar to this, and you’ll just have to believe me on this, was to be had shortly there after.   “Bob, Bob, don’t be so pedantic, it’s exhausting,  MOVE ON ALREADY.”  Ok, but just about every day’s sunrise is beautiful.  SO THERE! 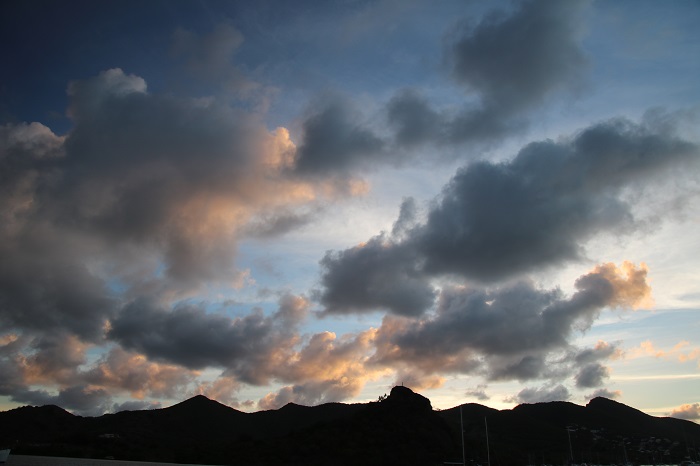 When we were in Grand Case, Bill and I went for a walk on the beach.  I loved this view of umbrellas, more like a flock of butterflies.  Do butterflies “flock”? 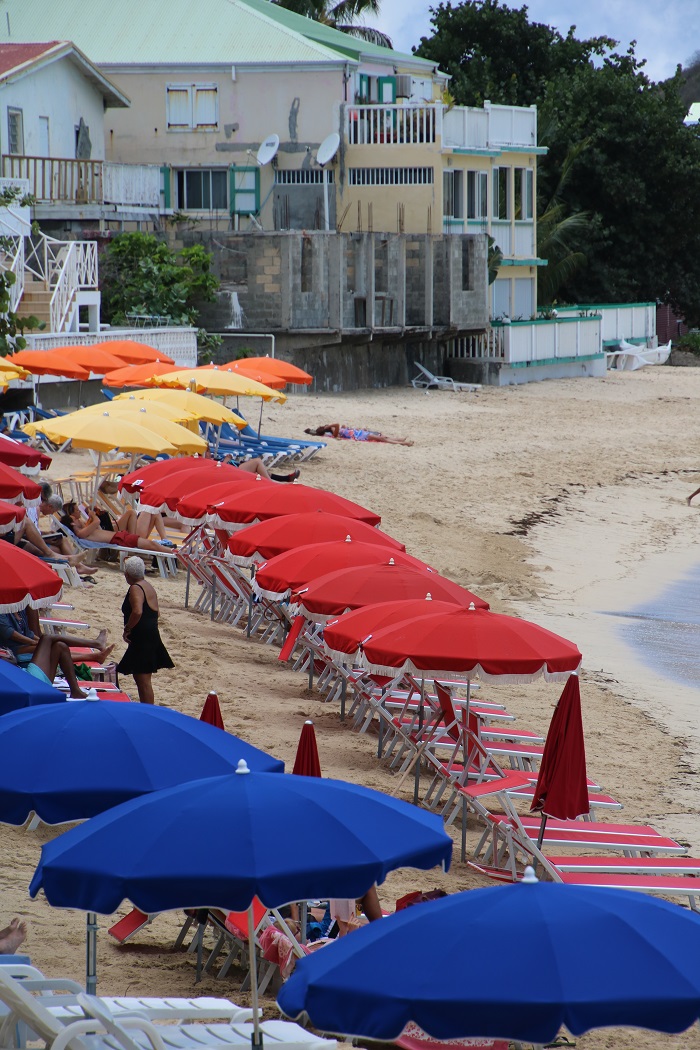 At the end of the beach there was a wrecked sailboat.  This is Bill taking in the scene. 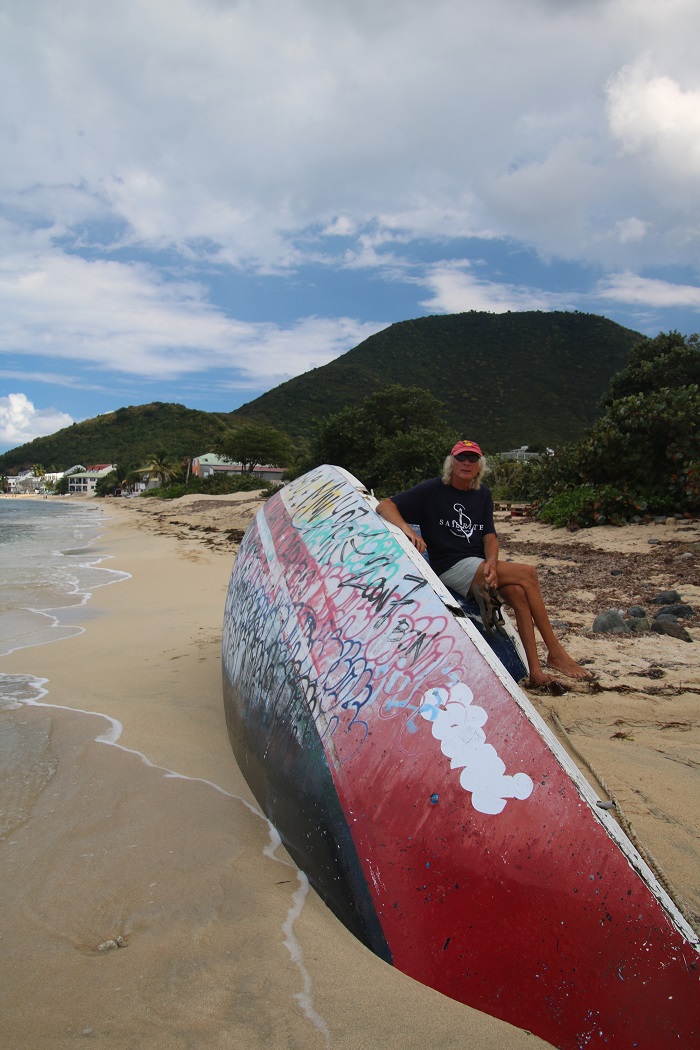 The beach went on for perhaps a mile with a dramatic “cliffy” end.  White clouds are endlessly fascinating to me.  “Yes, that and sunsets Bob.”

We went out for Valentine’s dinner with our cruising buddies from Kalunamoo, Maureen and Bill, to a very nice French restaurant.  Good choice because French is about the only choice in Grand Case.  The weather was very cooperative as it seems that the stronger winds that plagued our trip here have abated for the moment.  The view from Pandora on the calm waters was pretty amazing.  Yes, I know, it’s that whole puffy cloud thing again. 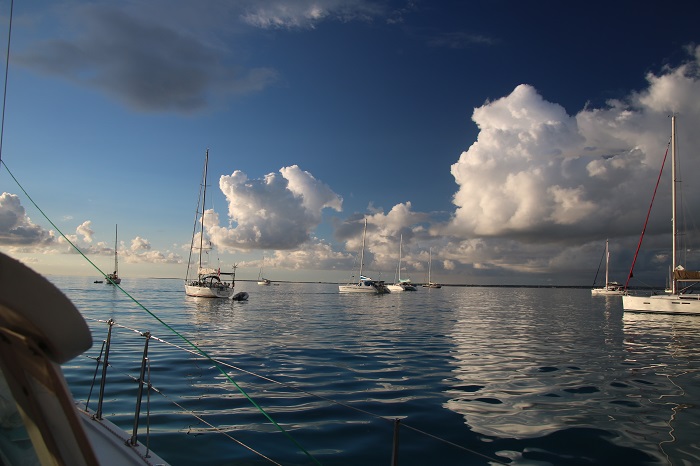 Our table at dinner was overlooking the water.  What a sunset.  You can see the showers in the distance, it’s the dark band coming down from the cloud. 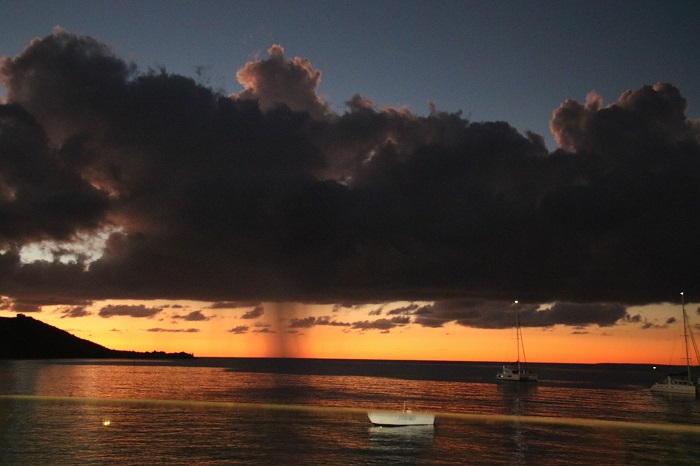 Brenda and I did some shopping earlier in the day and enjoyed the sights.  I was surprised to see an old Morgan in parts.  I wonder what the story behind this car is?  Morgans are still made in England and are eagerly sought after by collectors.   This one would take some doing to get back on the road.  However, it would be a fun story to tell.  “Oh yeah, I found this car in St Martin behind a lovely French restaurant.   Had it shipped back to the States….” 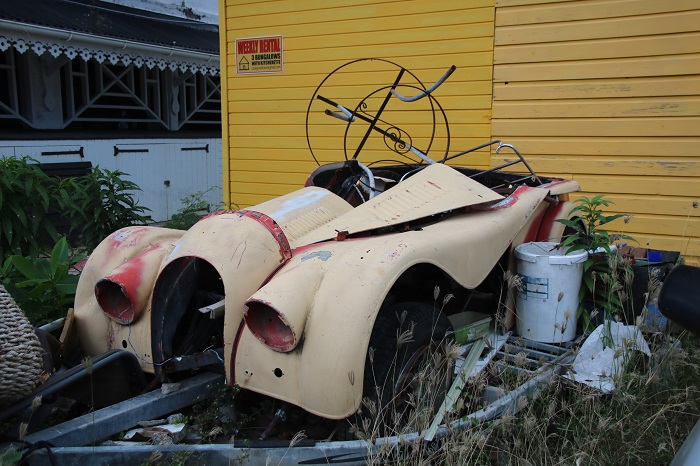 I loved the ferns growing up on this doorstep. 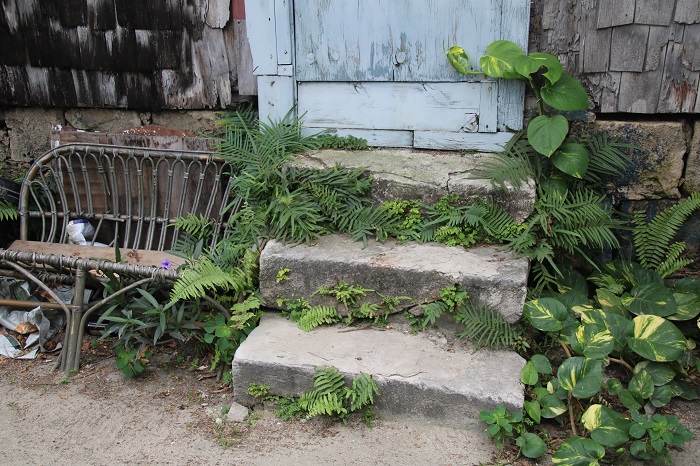 Yesterday morning we headed back to Simpson Bay and made the 09:00 bridge.  As we were waiting to enter the bay a large spotted eagle ray swam by Pandora.  She/he was about 4’ from wingtip to wingtip.  A majestic sight. 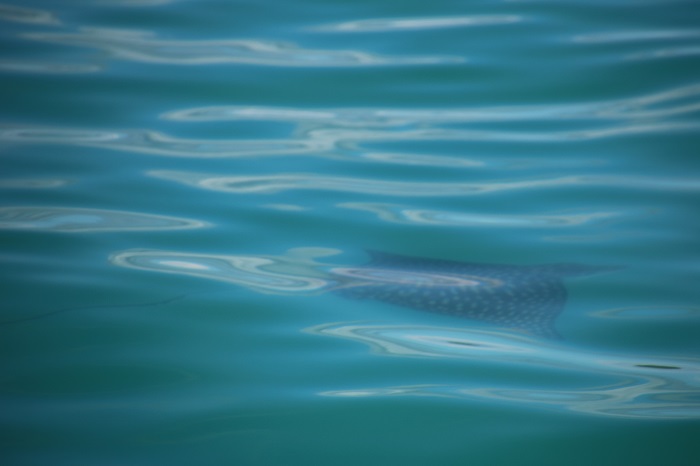 This training ship has been in port here for a few weeks.  It’s a bit odd with it’s green sails.   She’s a big girl though so I guess she can dress any way she wishes. 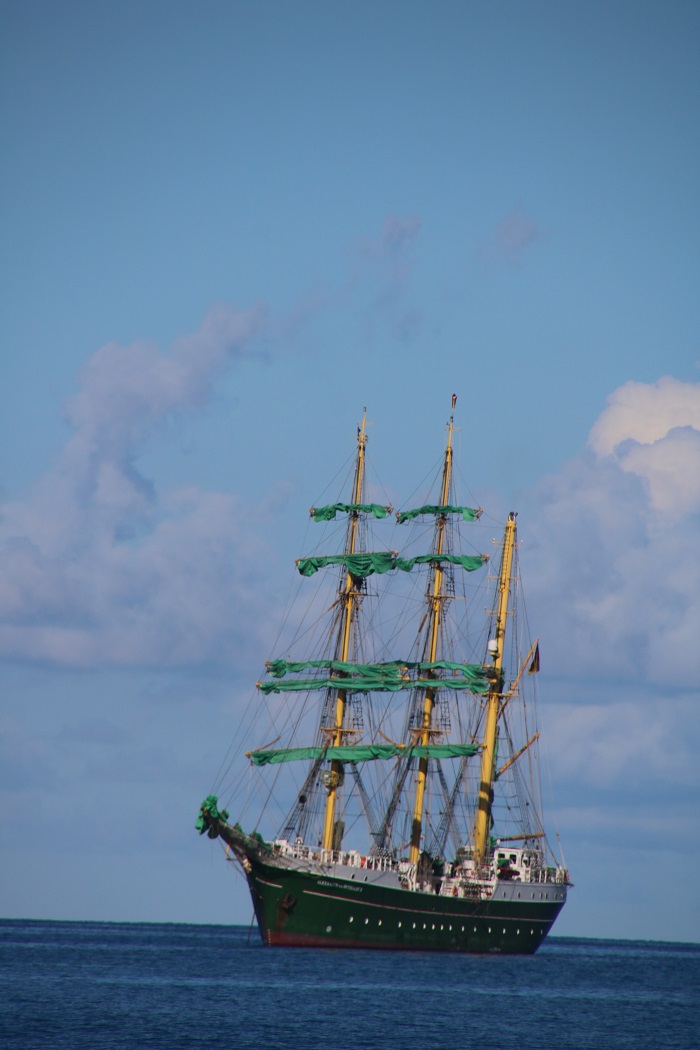 The entrance into the lagoon is impossibly narrow with a rocky shoal protruding into the channel on port side. 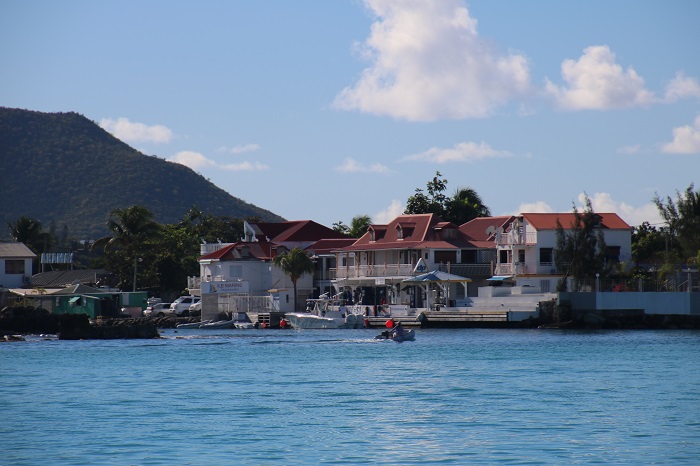 Since moving back here I have been consumed with “whack-a-mole”, yes, boat repairs.  When we tried to pull up our anchor in Grand Case the windless failed.  No warning or grinding sound, just no “weighing” except by brute muscle.  It was an exhausting job.  After hours of “analysis” I decided to scrap it and get a new one.  It looked nasty.    Looking at this photo now I realize that I could have saved myself a lot of time if I had just realized that it was hopeless from the get go.  However, sometimes “ugly is only skin deep” but not with windlesses, it woudl seem. 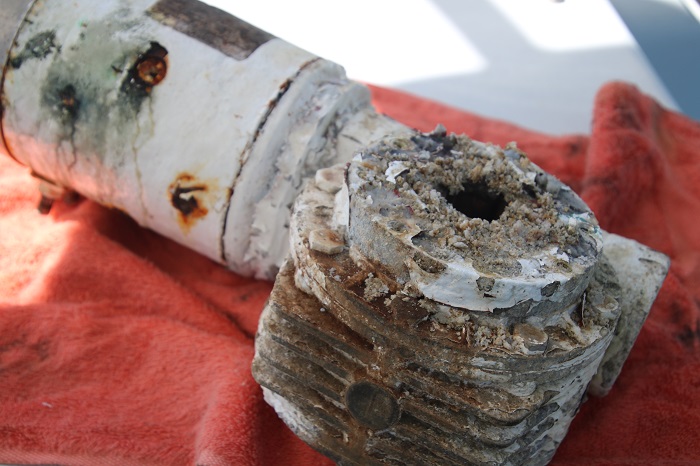 Fortunately St Martin, both the Dutch and French sides are “duty free” so prices are competitive with the U.S. and in some cases, less.  There are two large chandleries on the Dutch side, Island Water World and Budget Marine.  However, Island Water World has a much larger selection and as luck would have it, windlasses were on sale.  They even had a 24V unit in stock.  How lucky was that?  I can not tell a lie but I’d have paid most anything.  The store manager helped me set things up by taking parts from several units and putting them together so I’d have enough power to pull up the anchor in a package that would integrate with the electrical components already installed on Pandora from the failed unit. It took some time to get everything settled but I was very pleased to have been able to find that they had everything in stock.   Thank goodness that the unit failed here instead of somewhere more remote.  Lucky me.  Yes, very, very lucky.

It took hours to remove and diagnose the old unit but once out about a half day of work got the new one in place and cleaned up.  And, as a special bonus, the anchor locker is now all tidy and clean.  Doesn’t it look like a “million bucks”?  Actually, it was less than two “boat bucks” not counting the multiple hammers I wore out “whacking” down the moles.   However, whatever the price, my aching back says “priceless”. 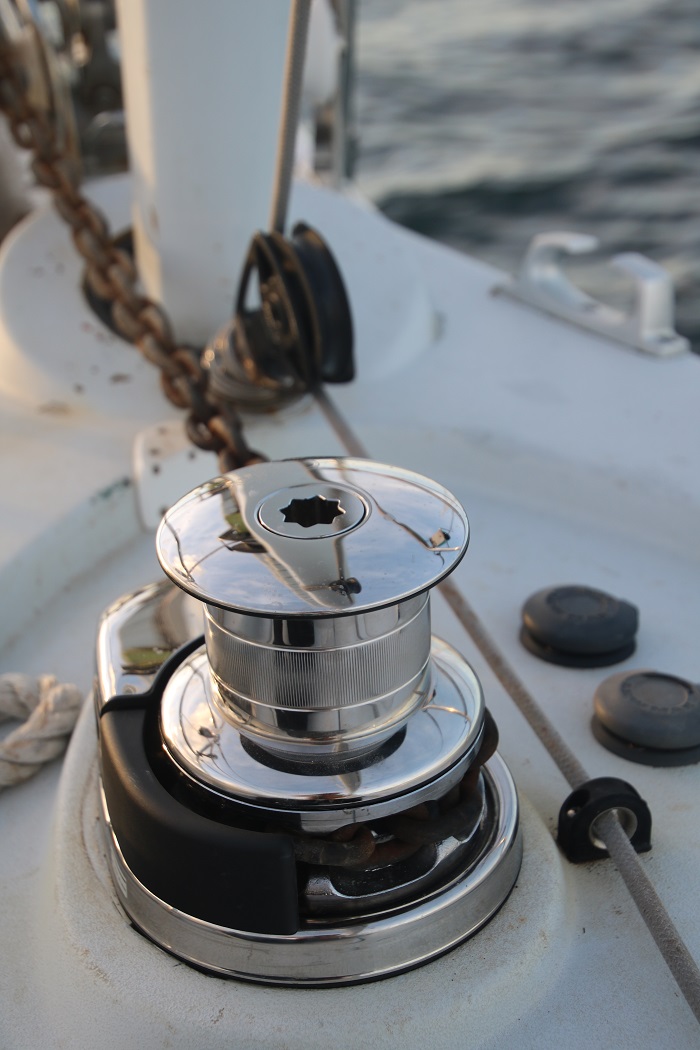 I also was able to pick up my repaired mainsail and will install it today.  Hopefully, it won’t be too windy as getting such a big sail up can be challenging.   Fingers crossed that it goes smoothly.  My friend Bill has said he’d help.

So, with the mainsail repaired and the newly failed windless back in business I have “whacked” most of the moles back into their holes for the moment.  Of course, that doesn’t mean that the SSB is back in service yet but hopefully, I will be able to run some new power cables to get that in shape today. Well, I’ll at least have the materials on board.

So, our plan is to take advantage of light winds in the next few days to make our way to St Barths where we will stay for a day or so before heading further south to perhaps Nevis or St Kitts.  After that, who knows.   Brenda and I would like to visit some of the islands, like Guadeloupe, a group sometimes called “the islands that brush the clouds” that have rainforests before she heads home from Antigua in mid April.

Perhaps I’ll close with a shot of last evening’s sunset.  It was beautiful and enhanced by a wonderful Mexican chili dish by Brenda.  To call it chili doesn’t do it justice. Yum. 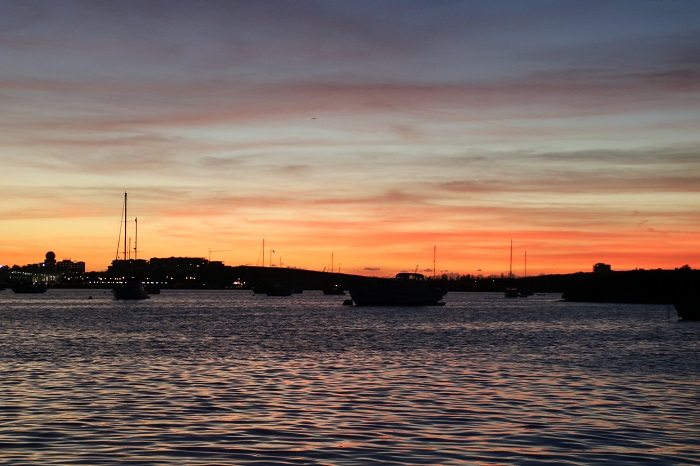 Oh yeah, one more thing.  Meet Louis, Pandora’s new mascot.  Brenda “adopted” him in Grand Case a few days ago.   Louis comes in his own “match box” bed, complete with a pillow, blanket and mattress.  Of course, the sailors suit is, as Brenda would say in a high pitch “mousy” voice, “just soooo cute”. 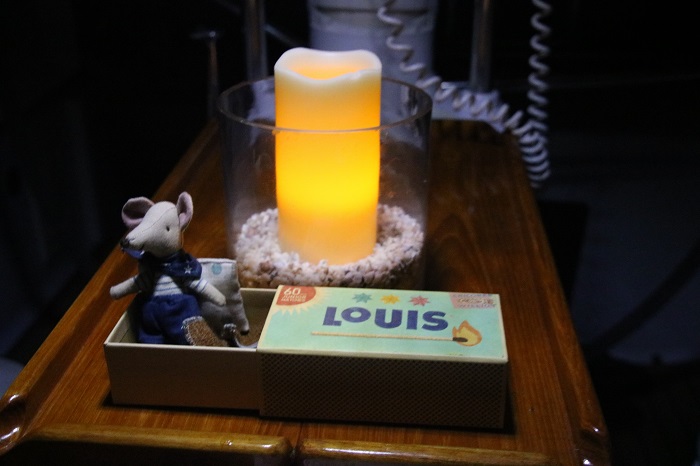 Louis will be traveling with us for the next few years until our Granddaughter Tori is old enough for Louis to live with her and tell her all about all the wonderful places he traveled with her Ya Ya and grandpa.

Just like me and Brenda, Louis seems to be settling in nicely to the Caribbean cruising life and enjoyed sharing stories with us during our candlelight supper last night.

I guess that’s about it for now.   Yes, a few more “moles” whack at and then on to other adventures.

Louis tells me that he’s about ready too.

2 responses to “Settling into Caribbean Cruising.”