Cape May to Chesapeake City aboard Pandora

It’s Monday morning and we are headed up the Delaware River under power.  There is a light wind from the north and the seas are very calm.   Our destination for today is Chesapeake City at the far end of the ‘Chesapeake and Delaware Canal, a very nice little anchorage at the very top of Chesapeake Bay.

Yesterday we made a 30km run, mostly under power, from Atlantic City to Cape May.  I am afraid that there isn’t much to say except that the seas were calm and it was uneventful.  Leaving AC in full daylight gave us a good look at just how built up the place is.   As much of the surrounding coastline has relatively little development so this place sticks out like a sore thumb. 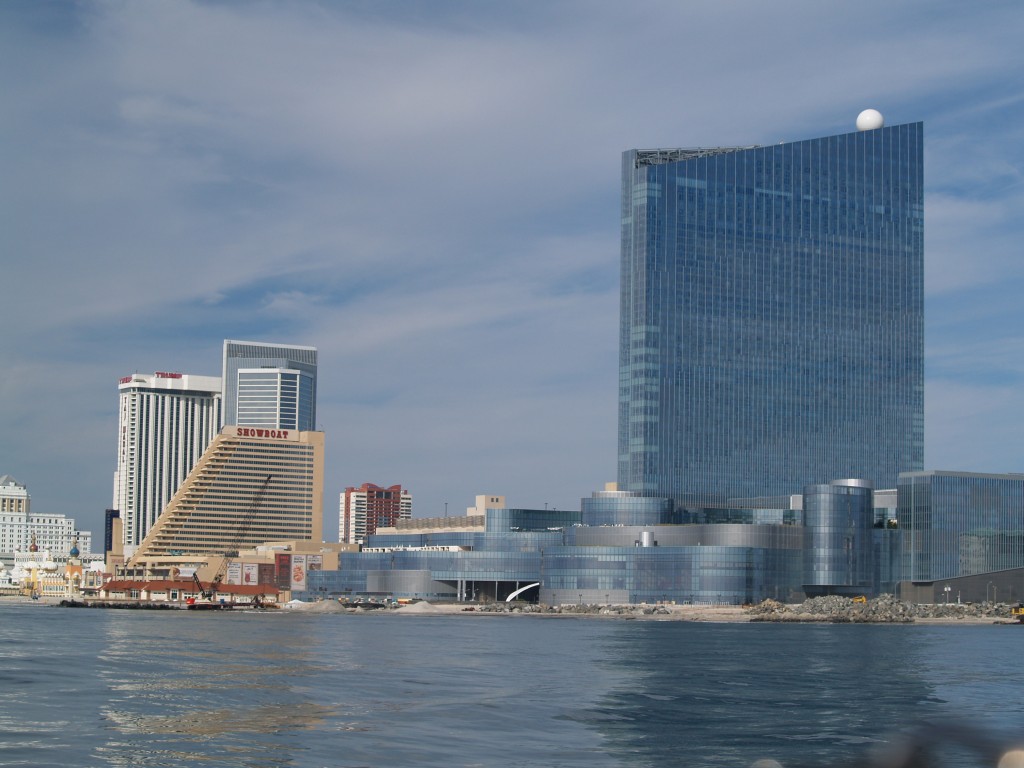 It was interesting to visit Cape May as I had not been there for nearly 30 years.  The last time I was there was when I was bringing my second boat, a Cape Cod catboat, Sappho, back from Lewis DL, just across the Delaware River, back to New Jersey.  Wow, that was a long time ago.  While I have been past Cape May a number of times since, I have always been on a delivery and didn’t stop for the night.

The anchorage is off of the Coast Guard station and there is plenty of room to drop a hook.  Interestingly, of the nearly a dozen boats that were anchored, about half were from Canada.  Cape May is a good spot to wait for a favorable tide and wind to head up the Delaware River to the C&D canal.

We took the dink into town, nearly two miles away, and had a drink at a local seafood joint on the harbor.   The view was very nice, with pleasure and fishing boats in abundance. 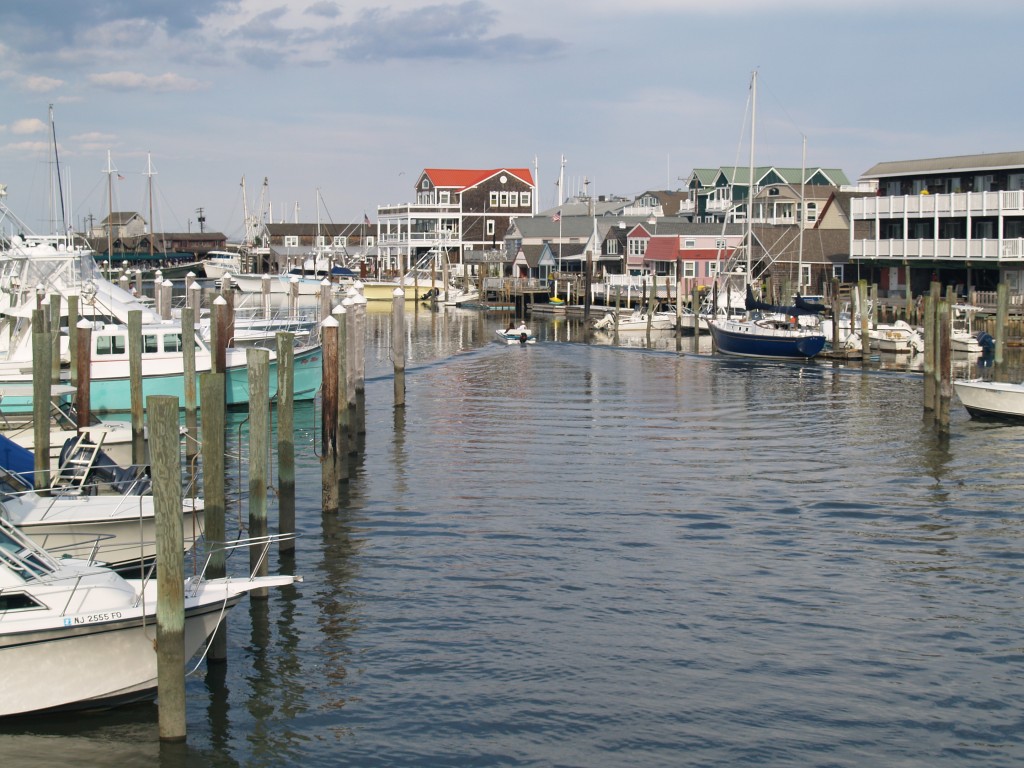 After that we motored further up the harbor and spied a row of boat houses, one of which, built in the 20s, was owned by the sister of a weaver Brenda knows.  We had been told to look her up when we were in town so we did. 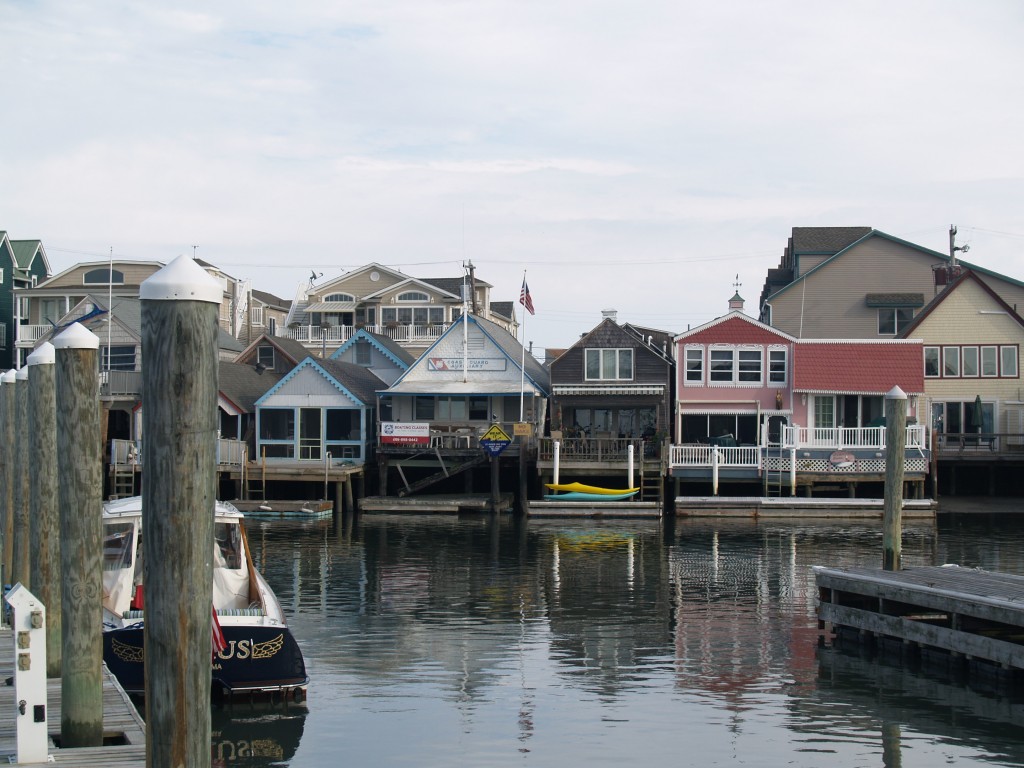 Sdina and her husband Fergie,  were indeed having cocktails out on the deck of the boathouse and when Brenda shouted, “are you Sdina?”, she was and were instantly to join them.    It seems that Sdina is nearly 90 and looks like she is at least 15-20 years younger.  How do she do it?   She was drinking red wine.   Hmm… We enjoyed a beer with them as the sun set over the harbor.  It was a very nice visit. Sdina is Swedish and the boathouse had been decorated as one would expect given her heritage.  She said that IKEA has done very well by them.

We headed back to Pandora and enjoyed a terrific dinner of fajitas, a nice way to end the day.  We turned in early as we had to leave really early today to head up the river.

This morning we set the alarm for 04:45 as the tide was to turn in our favor in the Delaware River at 05:30 and it’s a good 50km up to the canal.  There are a number of ways to head up the Delaware from Cape May, one that takes you very close to shore around Cape May point through some unmarked shoals, some of which are only 2-4′ deep and another, longer route, that involves heading out to sea about 6km prior to turning to the north to head up the river.

In spite of the fact that some of my friends, and it seems, a number of the other boats that left around the same time I did, take the shorter, more tricky way, Brenda and I decided to play it safe and headed out the long way.   Even that way involves going over some really shallow places, some less than 10′ deep, the shoals seemed easier to avoid.

While my charts are only a few years old, I did find that some pareticularly shallow areas had migrated somewhat and I found myself going over some scary spots that were less than 15′ deep where the chart showed nearly 30′.   That has been my experience each time I have made this run.  Besides, it was dark for about an hour after we left port and seeing the water swirl in the really shallow places would have been impossible in the dark.  I have a real aversion to running aground, especially miles from land where there should be plenty of water.

We were well out to sea when the sun came up.  I am always moved by seeing the sunrise over the water.  It makes you feel really insignificant. 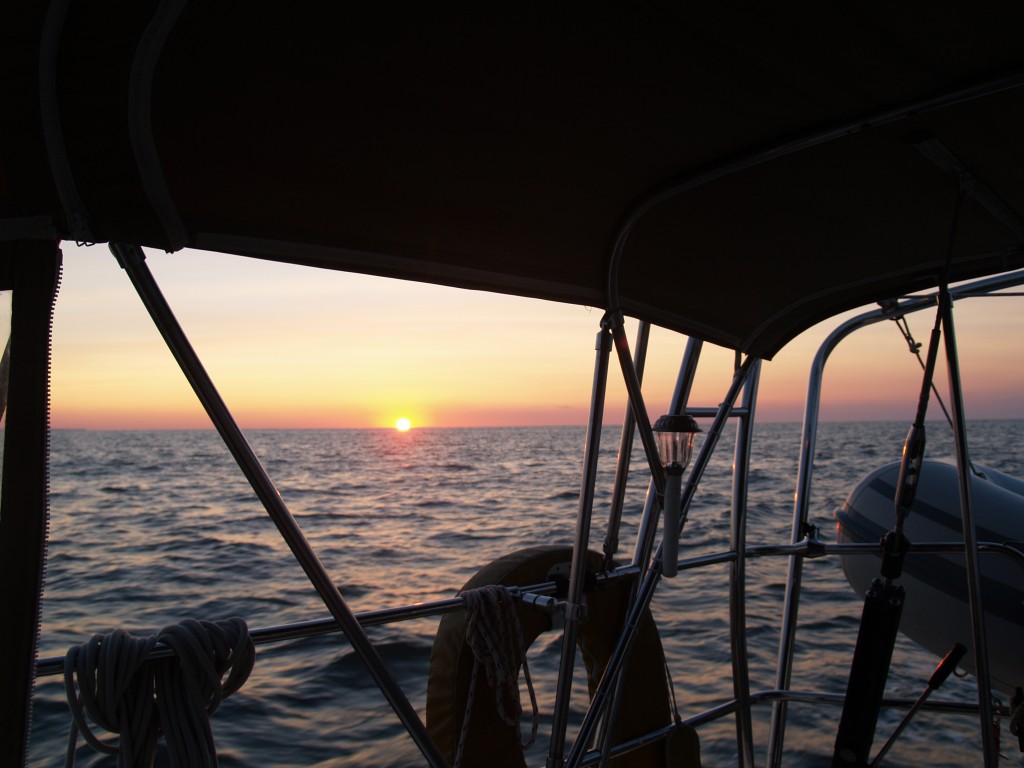 The amount of water that is moving up and down the river with each turn of the tide is amazing.  Here we are, going about 7kts through the water and yet our over the bottom speed is over 8.5kts and further up stream, greater than 9.5kts.  As the river is over 15km wide at the mouth, that’s a lot of water moving along with us.

With this amount of water running up and down the river twice each day,  the bottom contours change constantly and shoaling continues all the way up the river so dredging is a constant effort.  When they pump the sand out of the channel, they deposit it on either side and that means that there is even greater shoaling on either side of the channel.  Pleasure boats (meaning small, like us) head up the channel just outside of the channel to avoid the ships like this one but not so far out as to risk the shoals.  There’s plenty of shipping to avoid and at over 600′ long, it is a very good idea to stay out of the way of guys like this. 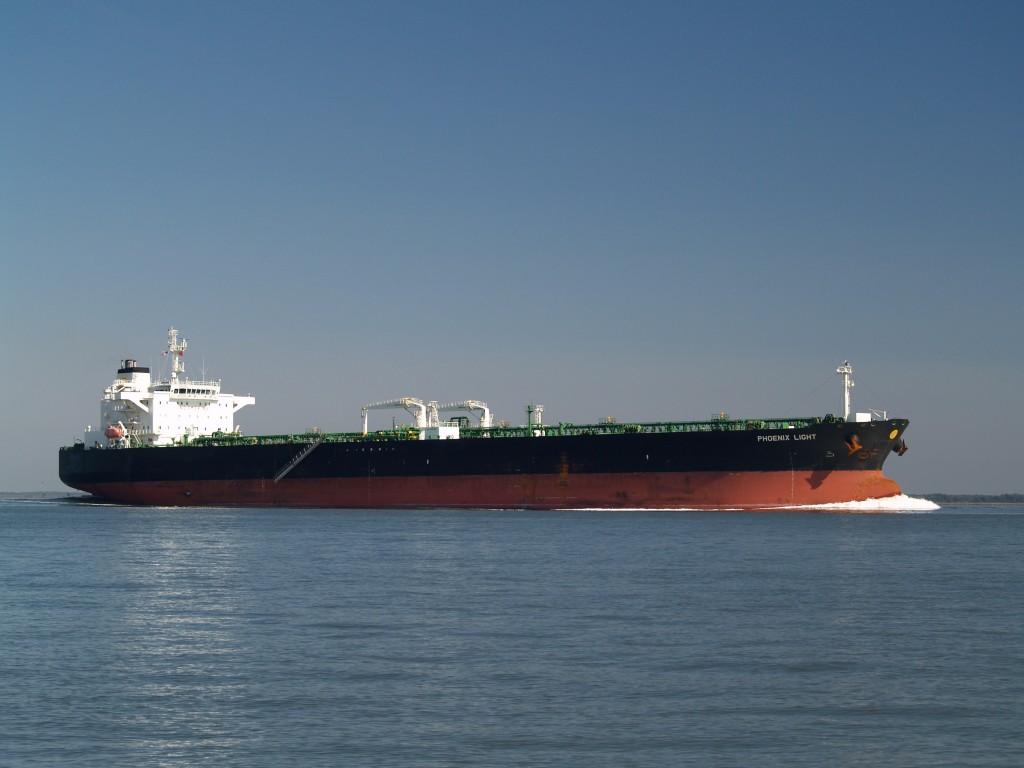 I shudder at the thought of coming face to face with this bow wave in the middle of the night. 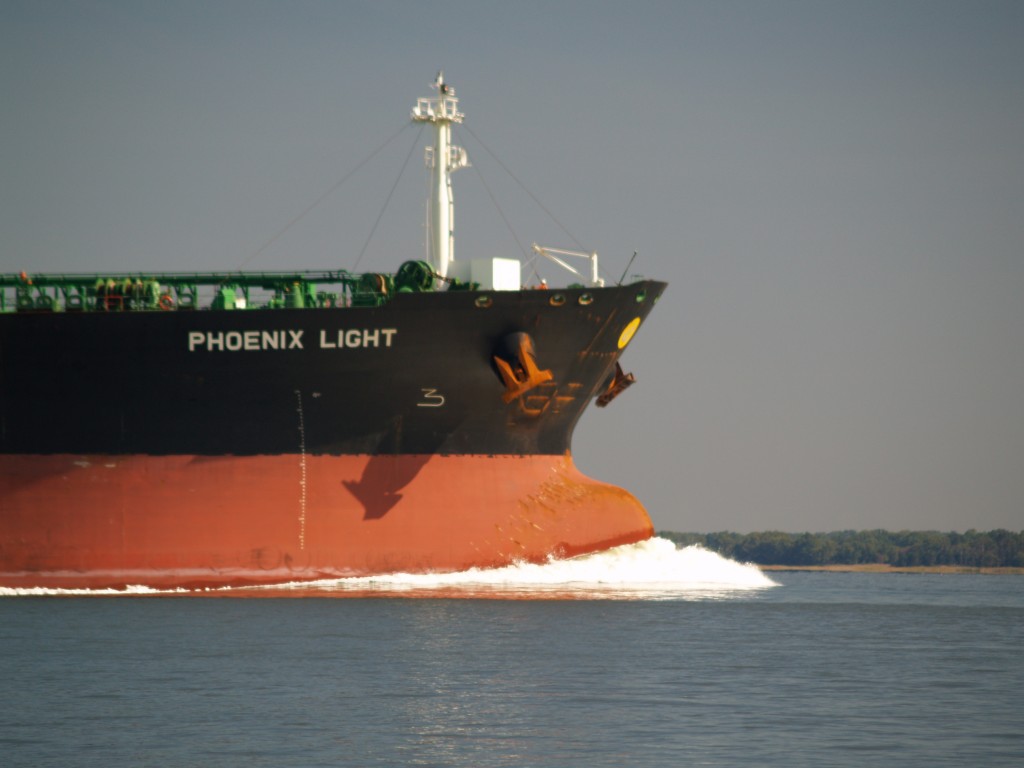 This one is interesting as it’s actually a large barge with a wedge shaped cut in the stern where a tug can fit inside to push it along.  When they are secured inside that cut, the tug and barge behave as one ship. 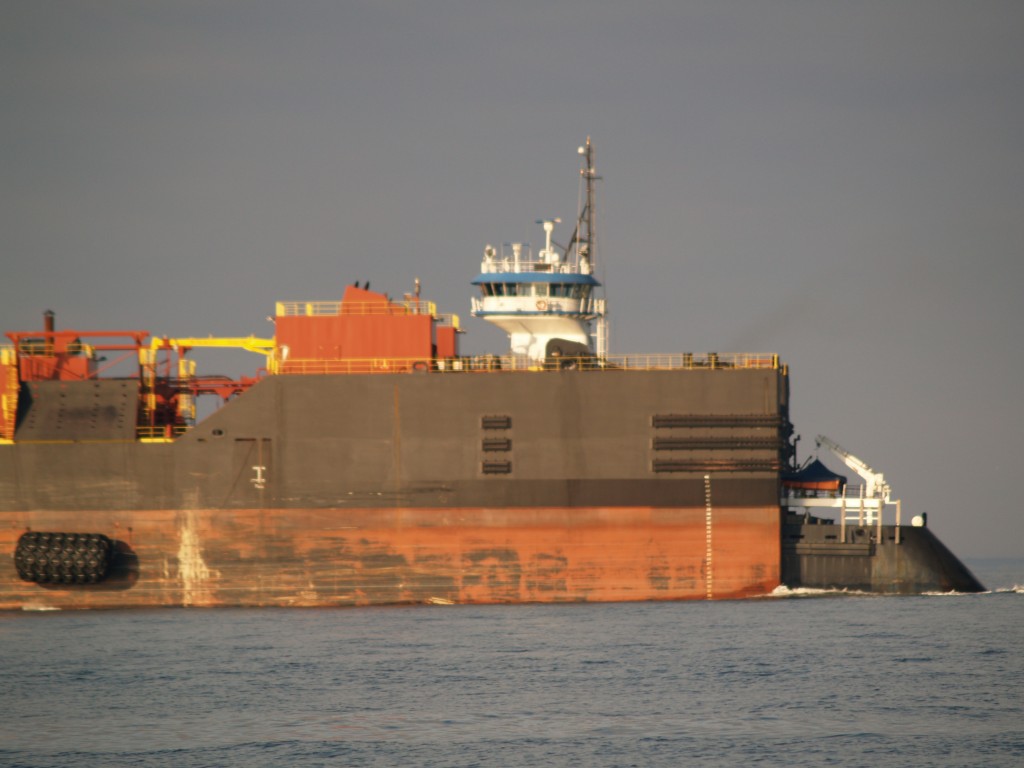 A particularly dramatic feature along the way is the Salem nuclear power plant.   It is hard to believe just how big this thing is.  That’s a lot of concrete.  Let’s hope that the steam coming out of the cooling tower is just water vapor.   However, not much of a carbon footprint. 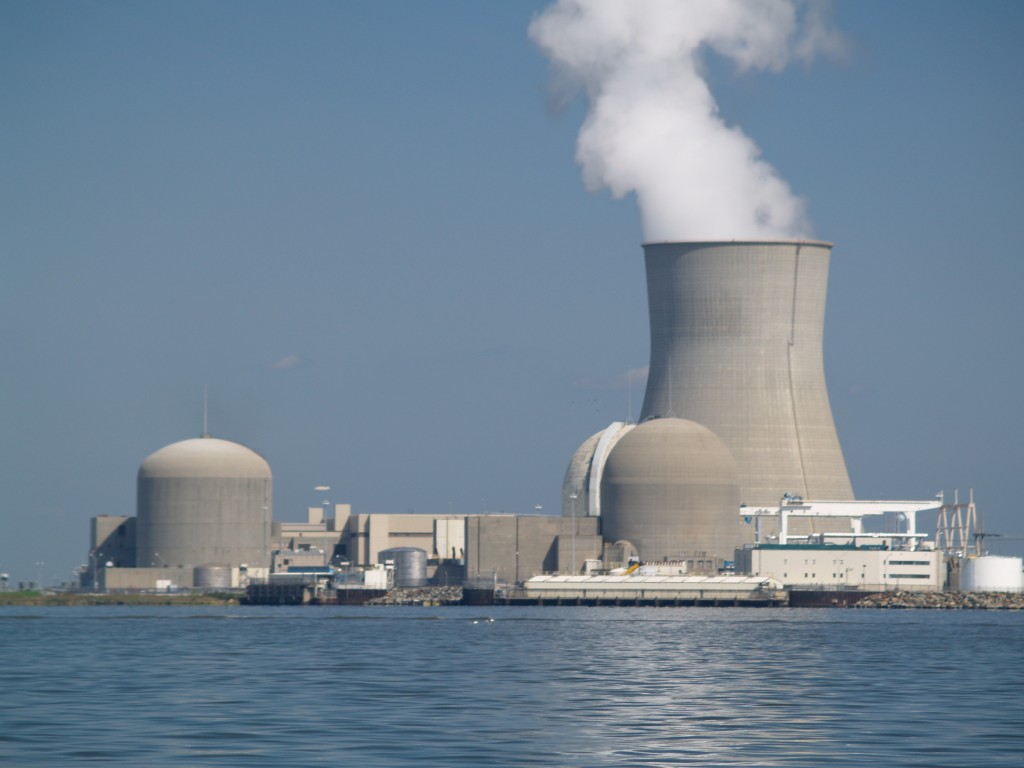 I liked this lifting barge.   It says that it’s home ported in NY but it’s hard to imagine this boat making it’s way down the coast.  Perhaps they lift it on another bigger lifting boat.  For inquiring minds to ponder. 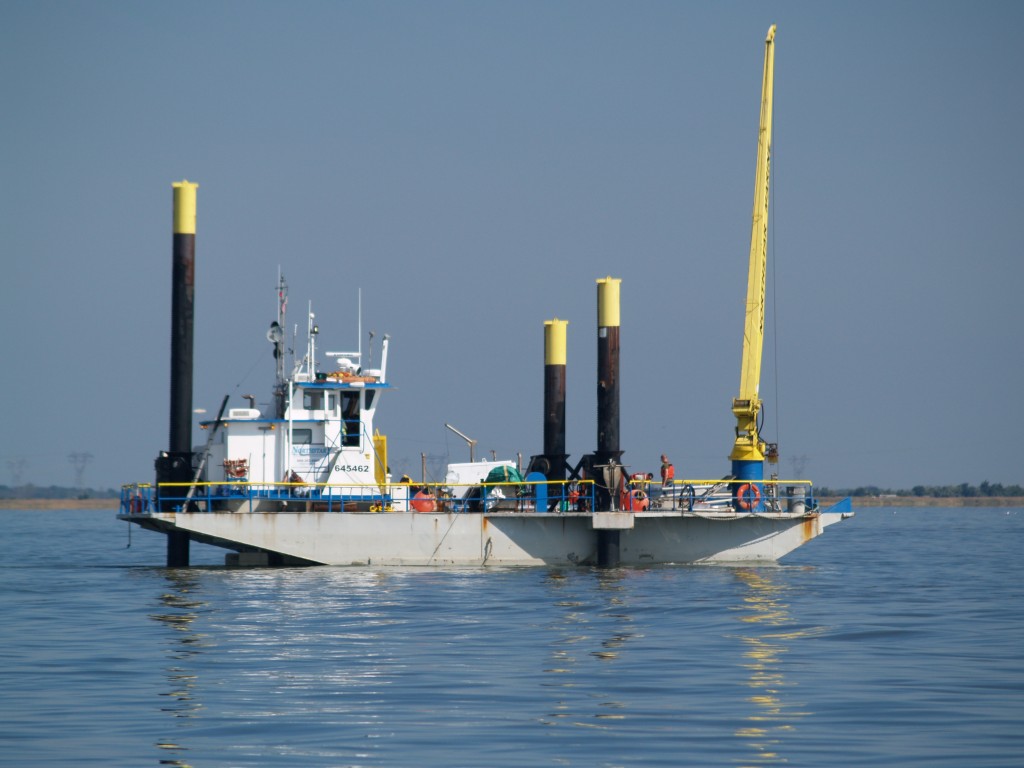 On the big ships they usually sport this sort of orange life boat on the stern.  The idea is to be able to easily, and quickly, get the boat in the water.  Imagine being “launched” by this lifeboat as the ship is being pounded by waves?  The seats in these lifeboats have tubular metal harnesses like an amusement park ride that come down over your shoulders.  That’s a thrill ride experience that I’d be happy to avoid. 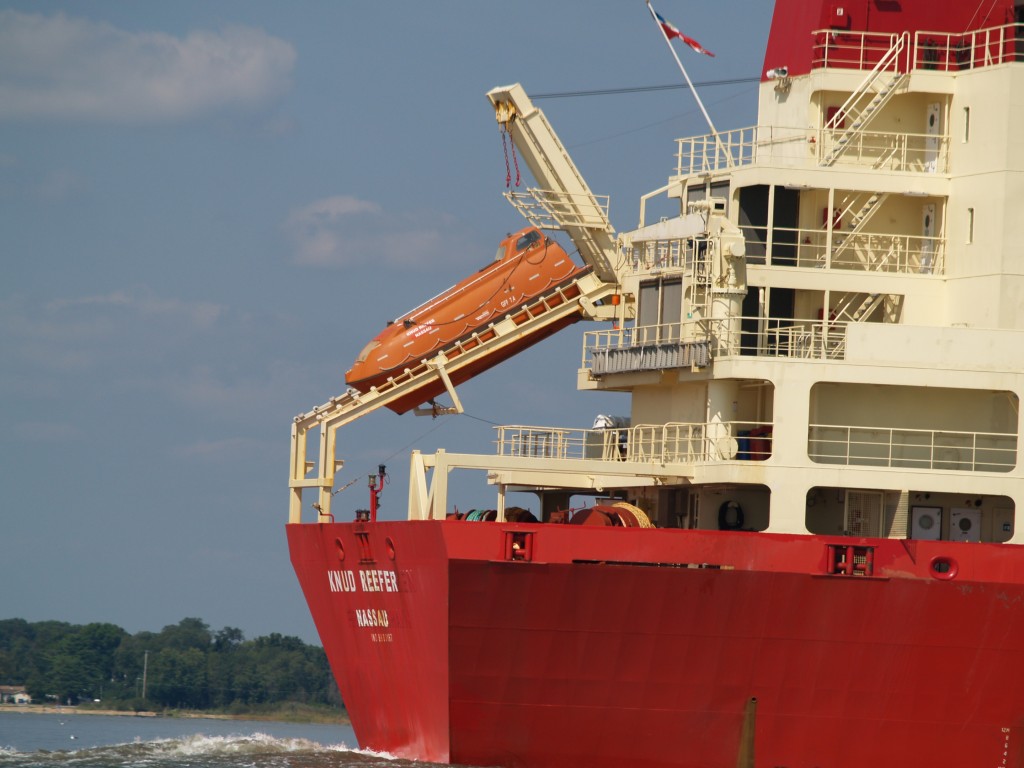 There are a number of interesting lighthouses along the river.  I didn’t get too close but you get the idea. 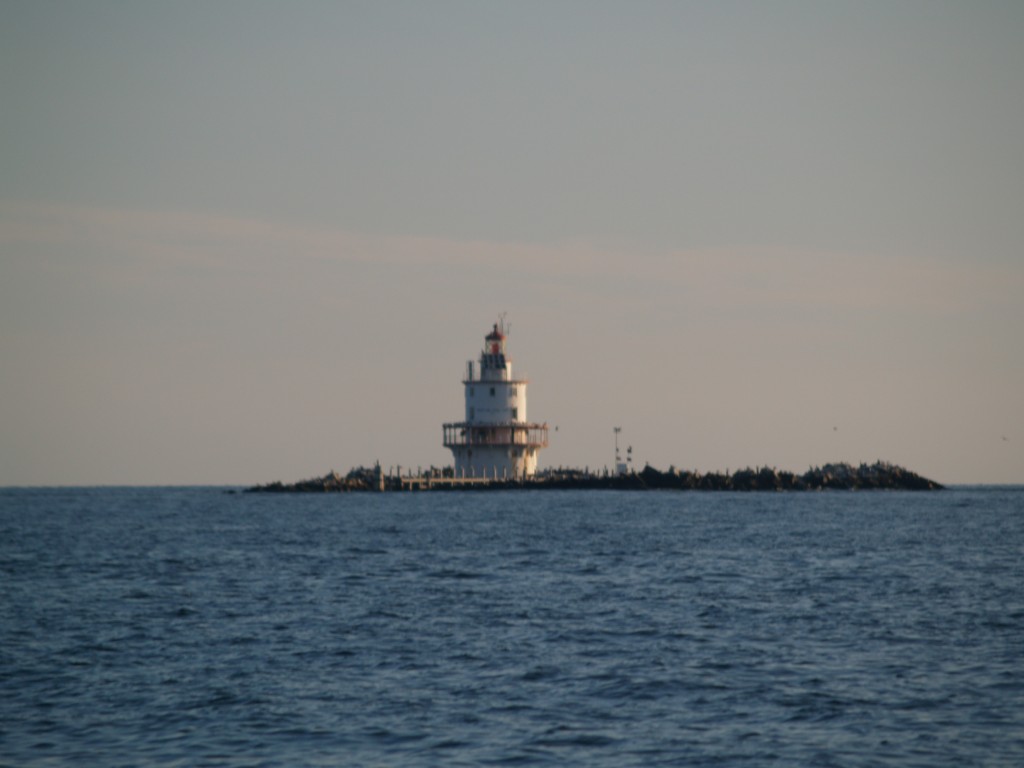 I like bridges and this new style is cropping up all over.  This one on the C&D requires a lot less maintenance as there is nothing to paint I think. 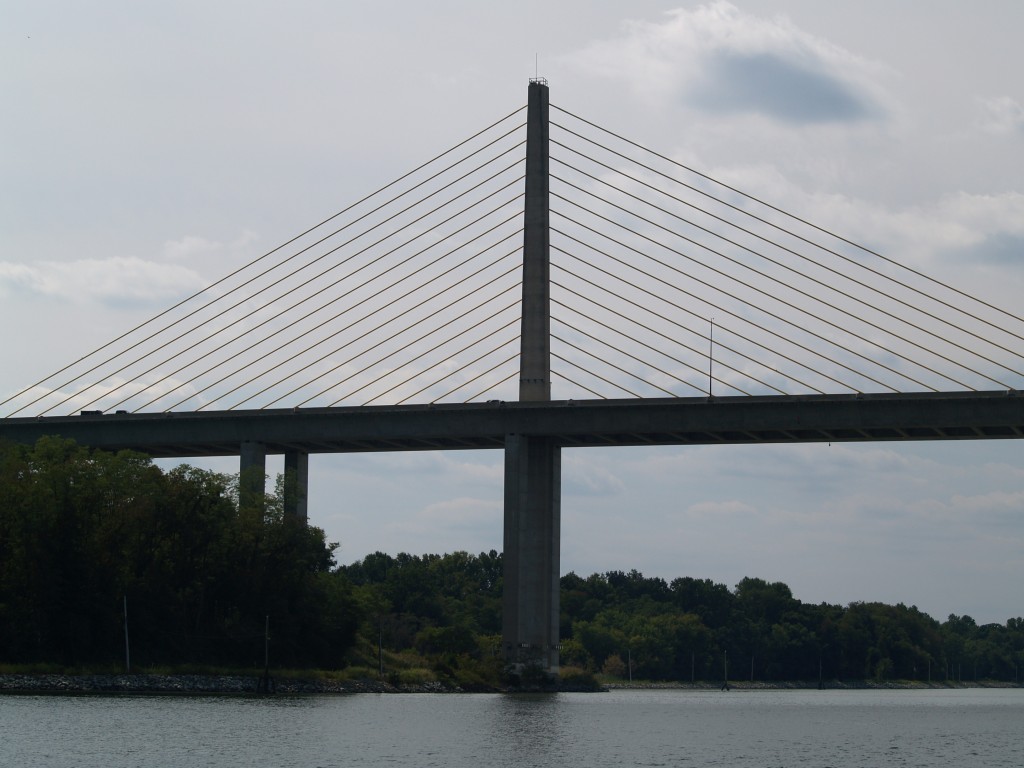 This older style one has a nice sweep to the approach. 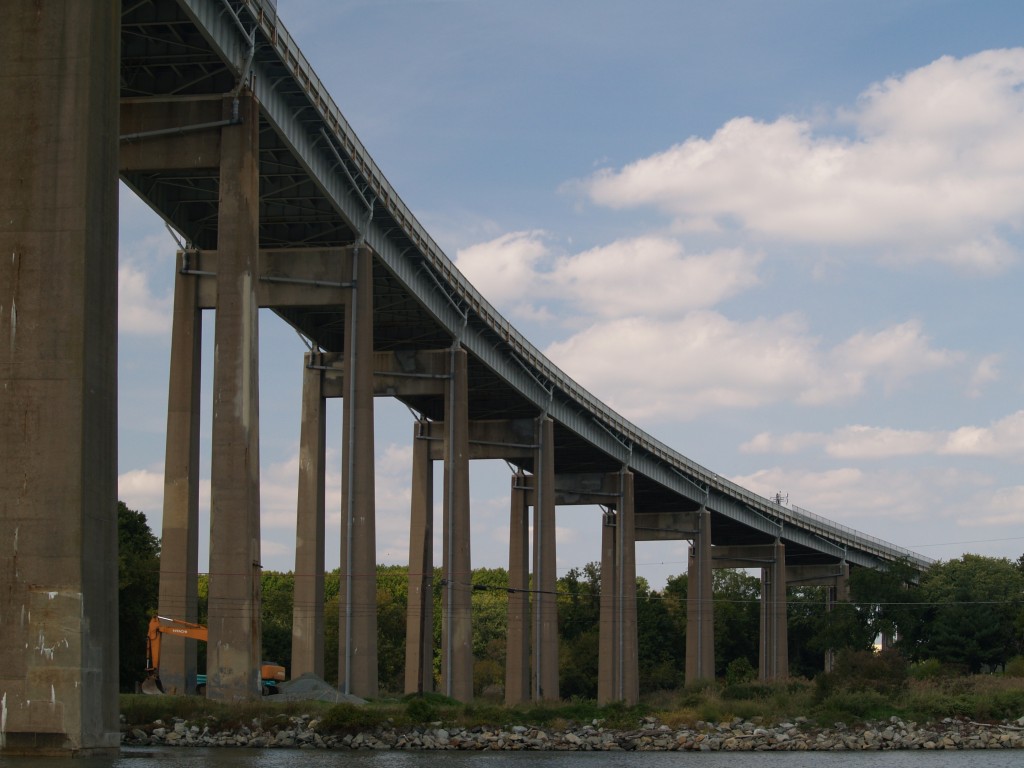 Well, we finally made it into the anchorage at Chesepeake City and I am just finishing up this post.  When we were in the middle of the river the data coverage on the cell phone wasn’t good enough to I wasn’t able to upload the photos and finish it up.

We are anchored and plan to go ashore and explore.  Actually, Brenda has her sights set on a weaving/knitting store in town that is particularly inviting.

Stay tuned for more action and suspense as we plan to stay here for the next two days.  Heavy winds coming on Tuesday that we want to avoid.

One response to “Cape May to Chesapeake City aboard Pandora”