We’re back in Tortola. 32 years later.

Well, we made it, we’re aboard Pandora in Tortola and all is well.  The sun is just about to peak over the eastern end of the harbor here in West End and it’s going to be a beautiful day. 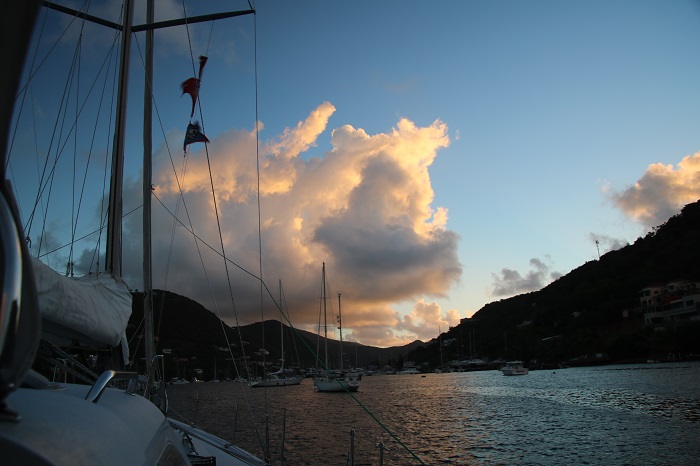 I have to say that I am pretty pooped as yesterday was a very LONG day.  On Sunday we winterized the house and, of course, set more mouse traps.  In fact, I have set so many traps set that we now have a “mouse dedicated” jar of peanut butter.  Brenda saw me “double dip” the knife into that jar at least once and… Well, let’s just say that I won’t be using THAT JAR to make sandwiches any time soon as it’s now indelibly marked “mouse contaminated material. NOT FOR HUMAN CONSUMPTION”.  Ok Brenda, I’ll go along with that.

After the final bit of water was blown out of the domestic water pipes and the thermostat turned down, our next door neighbor Janet drove us to the airport. We had decided to stay at a hotel on Sunday because there was just no way that we’d be able to get the house ready and make it to the airport in time for an “O dark 30” flight yesterday.  Conveniently, Janet has parents up near the airport and offered to drive us to our hotel.  Thanks Janet for being a good neighbor.

Our final act before leaving for Tortola was to meet our friends LeaAnn and Garrett, who came to our hotel room to join us for a light supper of cheese, crackers, soup and, of course, wine.   You know, all the basic food groups.  LeaAnn is Brenda’s oldest and best friend.  Well, to be clear, she’s not Brenda’s “oldest” friend but she has known her the longest, since she was 8 years old.  That’s a VERY OLD friend and it seems is getting older by the day, but we won’t think about that right now, will we?

Anyway, we had a great time and it was a nice way to toast us on our way for the rest of the winter.

Airport hotel or not, we still had to get up at an obscene hour to catch our 05:50 flight.  But we made it and now we are here and “here” is just beautiful

A lovely view greeted me today as I had my first sip of coffee. 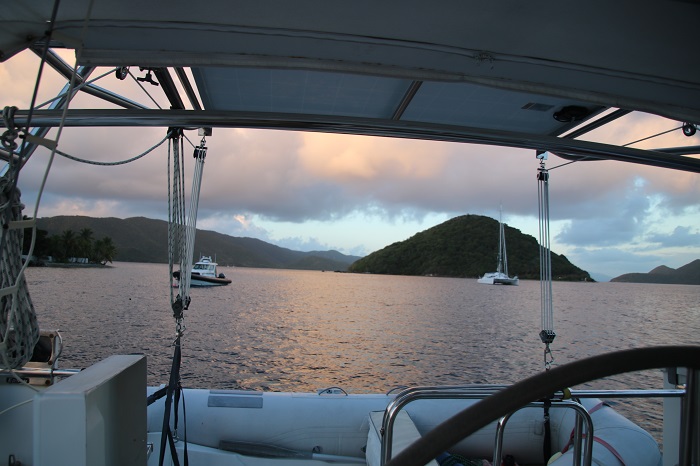 And a pelican stopped by to say hello. 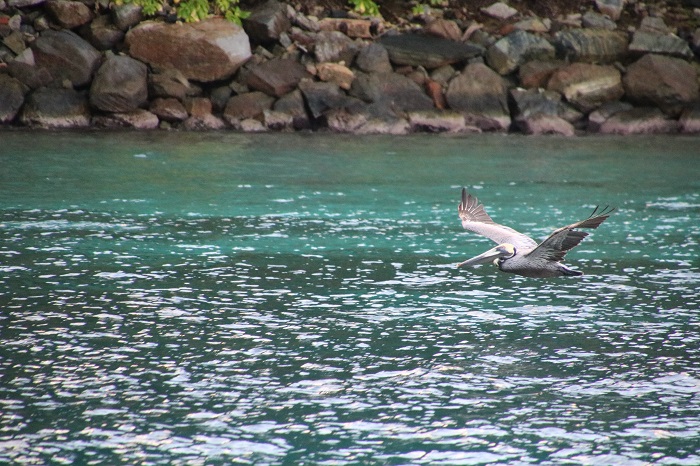 I am dragging a bit today so I decided to make 50/50 coffee.  “Watch out Brenda.  Bob’s had caffeine!”   Hopefully, it won’t be too bad.  The problem is that when I drink “real” coffee the feeling that I get isn’t particularly good, unlike our son Christoper who says that “coffee makes him normal”.    For me, I get the same sort of feeling that I had the first time I tried to work up the guts to call Brenda the first time to ask her for a date when we were Juniors in High school.   I was really excited but felt a little queasy.

And speaking of Brenda, which I do from time to time, and the title of this post, the whole “32 years and we’re back” thing, it was about this time all those years ago that Brenda and I were last in Tortola together.

I have to say that it really hit me as we landed at Tortola’s Beef Island yesterday and all those memories came flooding back.   Brenda was pregnant with our son Christopher, the “normal with caffeine Christopher”, our second.  She was pretty far along and we decided to head away for a week because we were pretty convinced that once we had two children WE WOULD NEVER GET ANOTHER VACATION ALONE AGAIN.  Happily, that turned out to be a bit of an exaggeration and I can’t believe that we are finally back here again after all those years.

Lucky us.  Lucky me!

Well, I’d better sign off for now as the caffeine is kicking in and I am having trouble typing.   I’m pretty excited too but my stomach isn’t quite as queasy yet as the first time I summoned up the nerve to call Brenda.

If I have a second cup.  I might have to join these two fisherman working the shallows with a throw net.  Yes, a bit random perhaps but I have to use up all that energy. 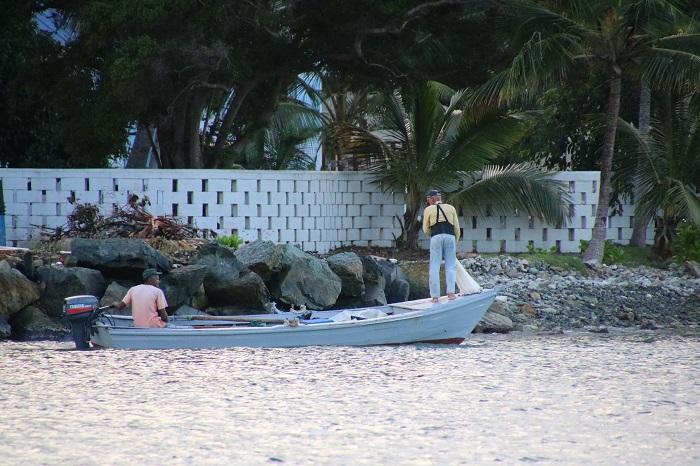 Yes, pretty excited.  It’s good to be back in Tortola together again after all those years.