It’s Wednesday morning and the sun is out here in Tortola.  However, that’s no surprise as it’s ALWAYS sunny except for the few minutes every couple of hours when it rains.   I had heard that it rains often, perhaps every day, more like a short shower so no surprise there.  After several years in the Bahamas where winter rain is a very rare happening, try once in four months, this is a much appreciated change of pace as it keeps Pandora’s decks clean of salt and grime.

Another welcome change is that the wind always blows from the east, all the time, unlike the Bahamas where fronts come through about once a week bringing with it winds that clock 180 degrees.  This means that we had to constantly watch the weather to be sure that we wouldn’t find ourselves on a dangerous lee shore.   Here, clocking winds are not a problem.  Having said that, it’s much more windy here with breezes in the low to mid 20s.  That has been a bit much but I am told that it’s been unusually windy since we arrived and that it will likely settle down in the next few days.  Actually, yesterday’s winds were more “zepher like” which Brenda would have liked.

Speaking of Brenda, which I do in just about every post if you’ve noticed, I’ll be heading home tomorrow to see her with a stop along the way with her to see Rob, Kandice and little Tori.  You know, the “cutest” granddaughter EVER!   (see the last post if you doubt my word)

Brenda and I will head back to Tortola together at the end of the month for a few months of sailing  together.  We hope to head down toward the southern islands after a short visit in the BVI to meet up with cruising friends and “buddy boat” our way further south.

It’s been a very difficult time to be away as Brenda’s mother died after a long illness the very day that I sailed out of Beaufort to head here.   The timing was particularly difficult as Brenda got word just one hour after I was out of cell range.  It was very unfortunate that Brenda had to face such a difficult situation alone with me out of touch save some email for a week.  Her mother died of COPD brought on from a lifetime of smoking.  Let me tell you, COPD is a particularly nasty way to die as you slowly suffocate.  Not pretty to watch and I am sure, complete torture to endure.

Brenda managed the situation y herself but I have felt supremely guilty that I wasn’t there to support her through such a difficult time.   It was the first really big event in her life for the last 45 years that I wasn’t there for and it felt terrible to be out of touch.  Fortunately, once we made landfall here I was able to find pretty consistent access to Wi-Fi so calling her on the phone was possible several times a day.  Had I been in the Bahamas, where Wi-Fi isn’t nearly as robust, it would have been even more difficult.  However, as I only had access to Wi-Fi when I was ashore, she wasn’t able to call me when she particularly needed to talk.

Anyway, I can’t tell you how excited I am to see her again tomorrow for the first time in two weeks and what a long two weeks it was.

This harbor, West End or Soper’s Hole, is very pretty and well protected.  There are plenty of moorings for rent and I’ll be leaving Pandora here while I am back stateside.

Yesterday Jim and I decided to hike up the nearby hill/mountain to get a view of the harbor.   We went up to the cell tower.  It’s at the top of the hill.  Let me tell you, it’s a lot farther away than it seems.    “Are we there yet?” 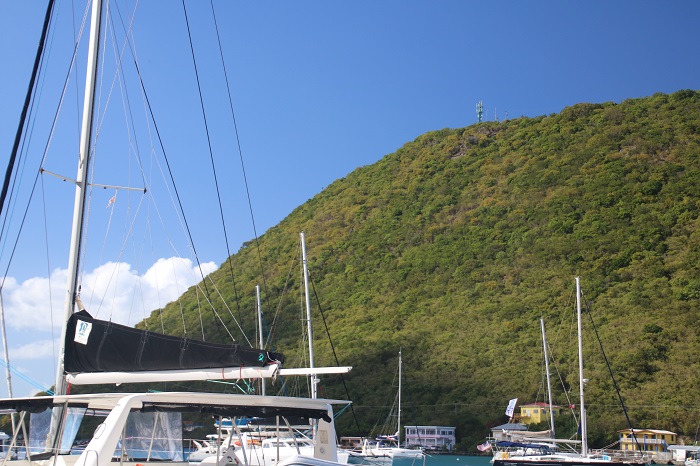 The view of the harbor was amazing. 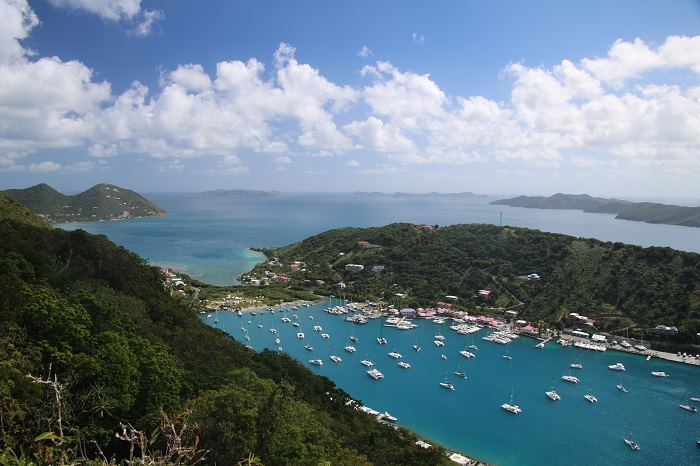 These buildings are where the local Pusser’s bar and restaurant are.  It’s a very nicely put together waterfront facility with nice shops and a pretty good grocery. 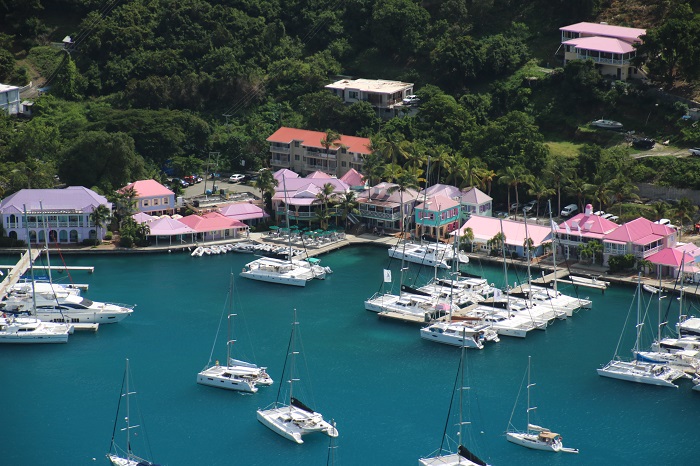 While Tortola is fairly arid, there are plenty of flowers.   I loved this butterfly.   My new camera is really amazing. 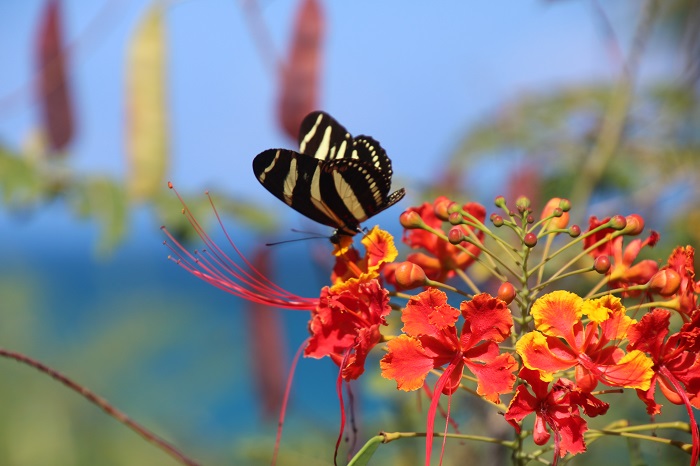 The view toward St John and the American Virgin Islands.  What a sight from up there. 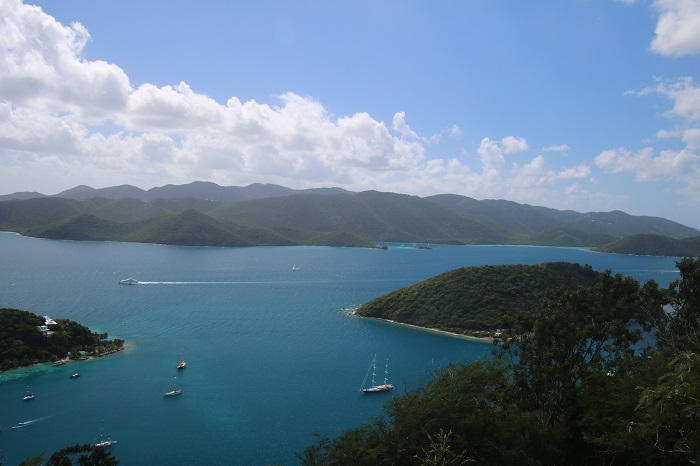 Here’s little Pandora, and Dave, tucked in the harbor.   She’s the lower boat if you can’t tell. 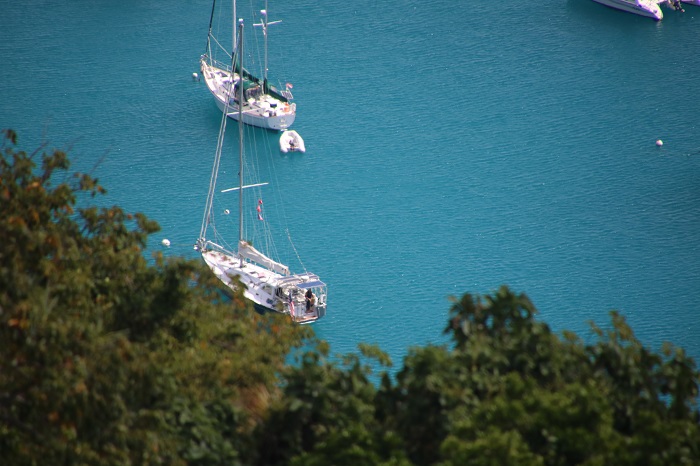 I am a big fan of pelicans and snapped this shot of one as he decided I as just a bit too close for comfort. 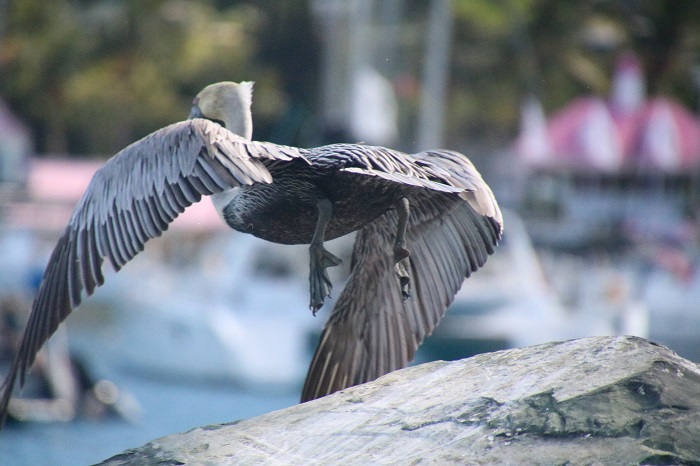 After we reached the top of the hill which felt more like a mountain, all 651’ up, with an emphasis on “up”.   Then we headed down the other side to Pirates Cove, I think that’s what it was called.  Liquor licenses don’t seem to apply here as an enterprising local had set up shop with a snack bar serving mixed drinks and beer was in full swing. 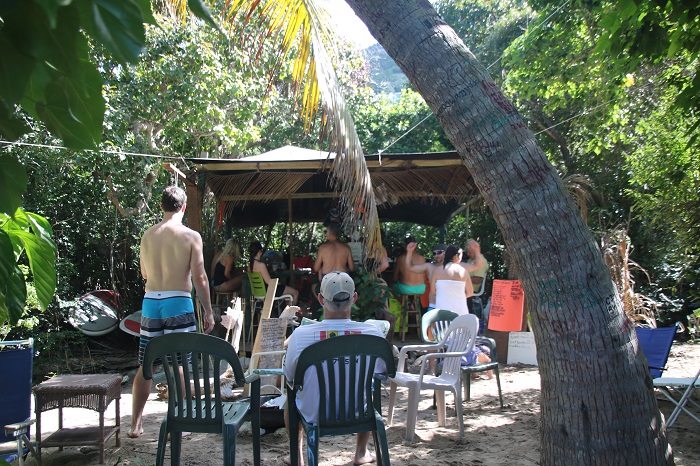 Not the fanciest place but a lovely spot to sit and enjoy the view.  This was our view as we enjoyed a Carib beer.   No kidding, shade and all. 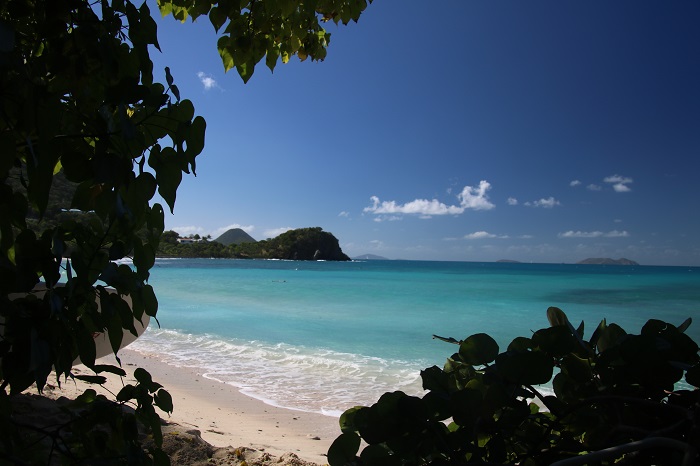 After a four mile walk there I was happy to put my thumb out and hail a local to get a ride back to town.

So, for our last day here I am not sure what we will do but I am a bit afraid of giving up my mooring and head out as there is a constant parade of boats heading in to pick up a mooring.   I’ll surely come unglued if we come back tonight and can’t find a “room at the inn” for Pandora.

Anyway, that’s about it for now as my crew is getting anxious for breakfast and granola bars will only get them so far.

It will be weird to pack winter clothing to take home today but I sure don’t need a heavy winter coat here.

Well, here I am only a little worse for wear after my 1,200 mile run south.  The good news is that tomorrow Brenda and I will be together again and then at the end of the month, back in Sunny Tortola for a few months of cruising together.

And speaking of “together” I can’t tell you how excited I am to be back with her again.  Yes, I know, I have already said that.

Did I mention I’ll be seeing her tomorrow?  So excited.