When will we get there? The BVI, that is.

buy provigil online canada It’s Friday, Christmas has come and gone and I am due to jump in  a rental car on Monday to drive to Beaufort.    With less than a week to go, it does look like the weather will support a mid-week departure for the BVI but, as is so often the case,  there is one “little” problem.

i need to order cytotec without a prescription When I dropped Pandora in Beaufort in early November I contracted with the yard to get some projects done.  That work included some engine work, a new charger/inverter, new mid cabin port glazing on ports that had developed chronic leaks as well as new bedding on the large glass dodger windows.

With two months to get the work done the answer was “no problem mon”.    Alas, not quite.  The engine and electrical work were done in short order but the windows?  Well, let’s just say that getting information on the status of the job has been nearly impossible.  I was getting so frustrated yesterday, with less than a week to go, that I finally had to call on the local SSCA Cruising Station host in Beaufort to get in his car to check out the status of the boat for me.     As expected, Michael dropped everything and went to the yard to check on the work.

The good news is that the large ports in the cabin are nearly complete but the cockpit window is not yet done, has been removed and is lying in the cockpit.  I have called the “closed for the holidays” yard off and on all week and hopefully will have confirmation soon that the work will be done in time.

I guess that it is experiences like this that make me determined to do most of the work on Pandora myself but sometimes calling in experts, as in this case, is the only option.

Anyway, this is the sort of thing what keeps me up at night but back to the subject of this post.   When I talk about next week’s trip to the BVI, a question that inevitably comes up is “How long will it take?”  Of course, that’s a complicated question that involves many factors, the first of which being “When will we leave?”.    And, as I have mentioned above, that’s currently a big question.

However, setting that aside, the next question is about the wind and that’s a big “Who knows?” too.    All of the above aside, another question and one that is in the minds of all sailors and designers, is “How fast is she?”   Below are a set of “polars”, a graph of predicted performance numbers for the Aerodyne 47 design.  It’s a bit confusing to read but worth digging into. 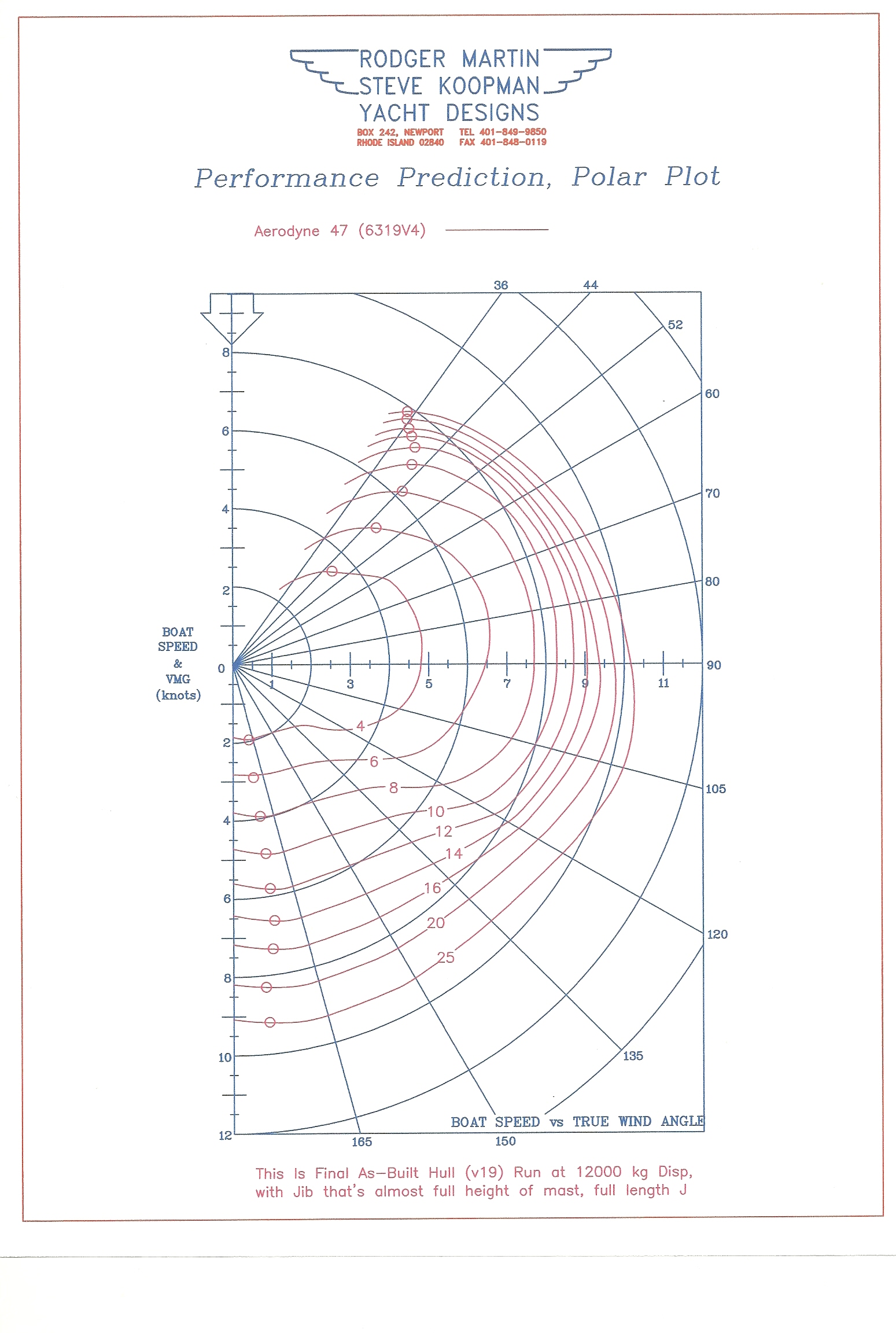 If you find it easier to read a table, here are the raw numbers. 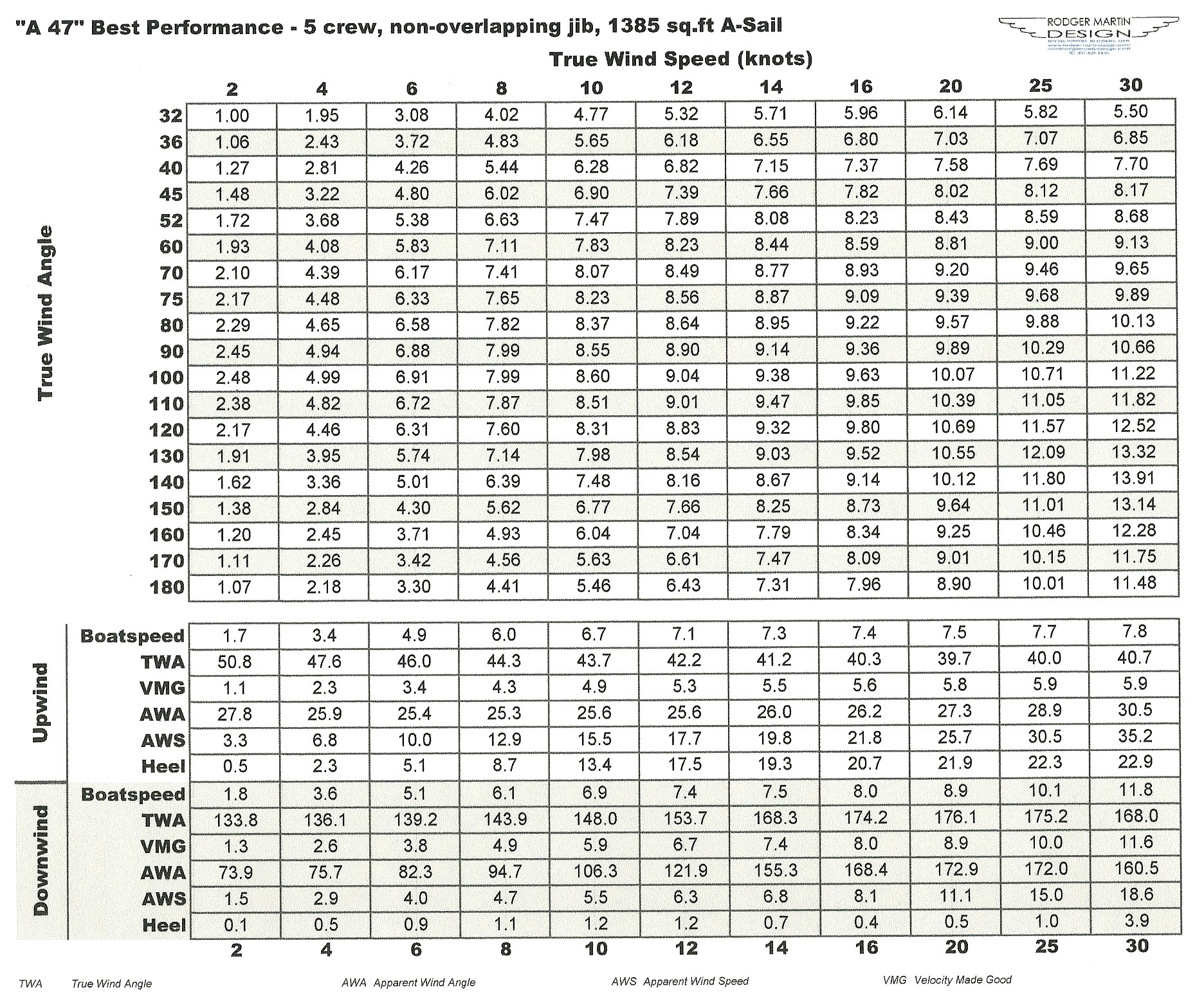 Simply stated, the red lines are wind speed which is overlaid on compass rose that shows a theoretical speed at any given wind angle and speed.    Rodger Martin, the designer, just sent them to me and at first glance I would say that my experience, with the understanding that these are for a boat that’s not as heavily laden with cruising gear as Pandora are consistent with the charts.  The stated numbers are in the ballpark if a it high.  However, when you consider that she has a LOT of stuff on board, they are pretty close.  In my experience, with about 15kts on the beam, that she runs in the 7-8kt range.  The numbers are impressive.  Nice design Rodger!

So, armed with these numbers, the question is “How long will our 1,500 mile run take?   Who knows but, for sure, there will be times when we will say “wow, she’s fast”.   Other than that? Who knows.  Besides, she’s a sailboat and Brenda’s opinion on the subject is something like “fast or slow, it’s sort of like watching grass grow”.   Oh well, I guess.  Seems fast to me.

So, now long will the trip take?  I’m betting around 9 days, give or take a day.   I guess we will have to wait and see.  For now, I’ll just have to hope that the work on Pandora is completed when I arrive or IT’S GOING TO TAKE A LOT LONGER.

With New Years Eve just a few days away, I guess I’ll close with the hope and expectation that 2017 will be a terrific year.

Fingers crossed for now.   And, as Brenda has said, “Bob and the dog, ever hopeful.”

One response to “When will we get there? The BVI, that is.”