Listen to your surveyor! Duh!

It’s less than a week until Brenda and I leave to head to our son Rob and his wife Kandice’s home in MD for a baby shower.  Yes, we are going to be grandparents , finally.   Yahoo!   And, after we return from that jaunt, Pandora goes back in the water and I’ll head to Hampton VA, two days later, to participate in the run-up festivities for the Salty Dawg Rally.   And, it’s pretty important that I get there in time as I am on the schedule to talk about our trip to Cuba.

No pressure but I had better keep this post short…

The last few weeks have been really busy with travel to various spots including the Annapolis Sailboat Show and a bunch of other destinations to numerous to mention.  But I think it’s safe to say that we are uber-busy these days and the pace is wearing us both a bit thin.

One of the many projects on Pandora has been to replace the water heater and that brings me to the title of this post, “Listen to your surveyor”.  When I was considering purchasing Pandora we had a surveyor to go over everything and as he went through the boat over the course of a day, he pointed out things that were both good and bad.

By the end of a very long day everyone was tired, nerves were more than a bit frayed and one of the last areas he inspected was the compartment where the water heater was located.  He noticed that there was some water under the heater and it looked to him like the heater had been leaking for quite some time.  The owner was quick to say that “oh, it’s just condensation from the AC”.  That was a plausible explanation except that the AC unit was UNDER the water heater and it was doubtful that the water would travel UP HILL to the heater.  Alas, the moisture never went away and a year later I decided to check it out.

I was hopeful that it would be nothing more than a weeping pipe fitting that could be rebedded, so I decided to remove the heater and take a look.    Of course, like all boats, it was shoehorned into an impossibly small space with tons of other stuff around it.  Here’s what I faced as I thought “where do I begin?”.

First I had to remove all of the AC and heater duct work.  Not so easy. 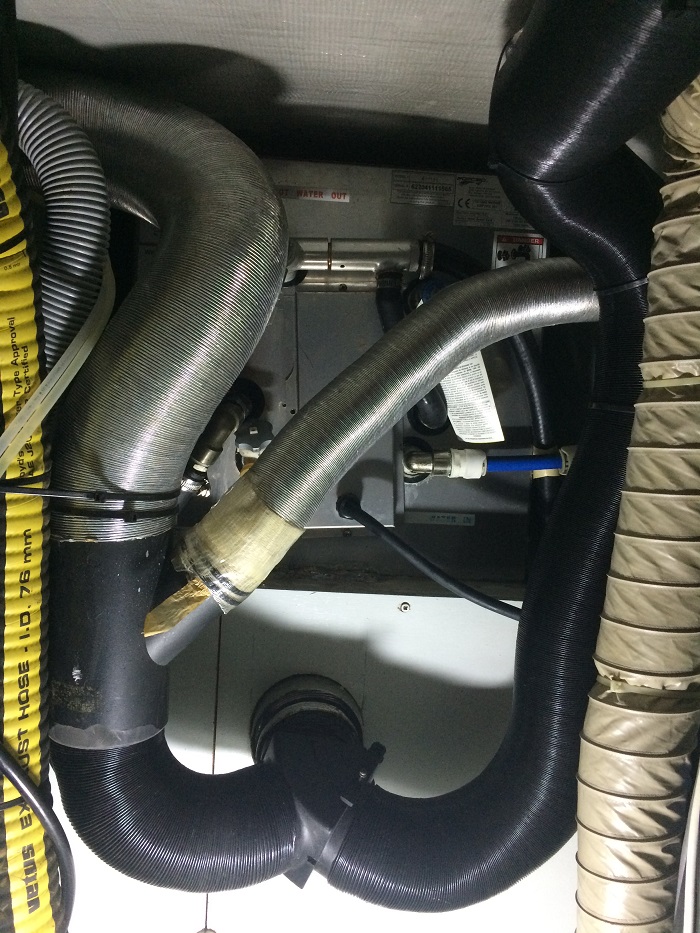 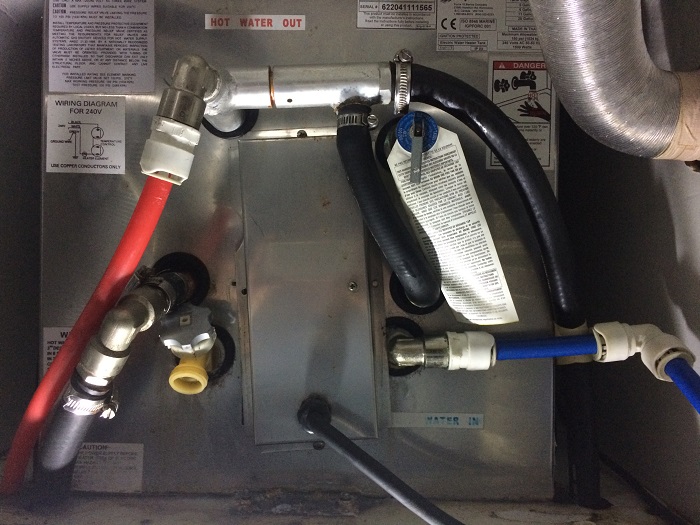 However, as is so often the case, the “beauty was only skin deep”.   I removed the stainless outer case and all of the insulation to see what I was up against.  Oops, major “up against”, in store for me.  Here’s what lurked beneath. This shot is a bit fuzzy (no make that a lot fuzzy) but you can still see major corrosion on the hot water outlet fitting.  It’s the dark spot on the lower left fitting in the picture.  That hole was eaten right through the aluminium fitting. 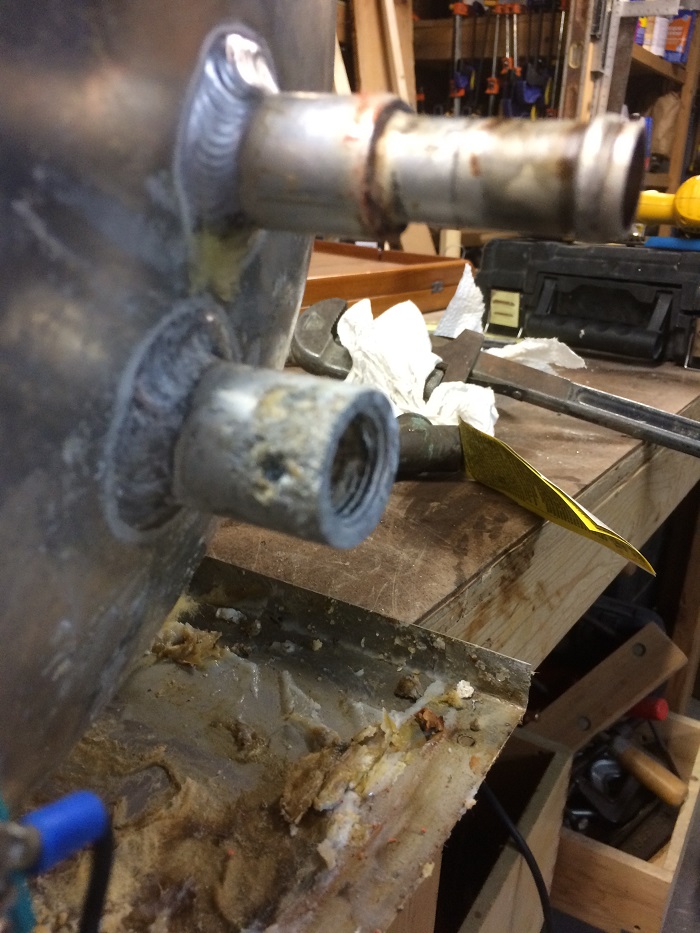 But wait, there’s more….  On various other spots on the tank I could see that corrosion had worked it’s way through the heater casing.   This spot is on the back of the unit, far from any fittings.  The water had eaten through the shell itself.   See the grey weeping spot? 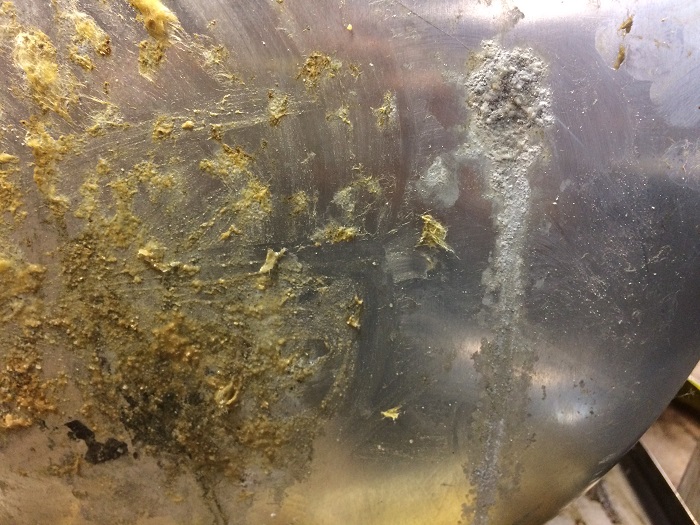 Water eating through aluminum?  I learned recently that product water from a reverse osmosis unit is very corrosive on aluminum, something that was news to me.  It seems that RO water is very low in PH and eats most any non-noble metal.   Think aluminum.  This turned out to be a problem for me as I use the RO unit for most of my water production as did the last owner.   Here’s what I found on a water engineer magazine site about the problem.   It said…

“The problem associated with reverse osmosis produced water is not in the processing, nor in the ability to provide needed quantities of water to supplement current supplies, nor is it in supplying finished water free from toxic contaminants, but it is in supplying finished water which is very corrosive to metal distribution piping. For anyone who does not know, reverse osmosis finished water has a relatively low pH (in the range of 5-6) and little to no alkalinity or hardness to act as a buffer. Thereby, this finished water is quite aggressive on metal distribution piping existing prior to the installation and operation of the RO system.”

Oops.  Aluminum and RO water don’t play well together.  So, what’s the solution?  Simple, just reintroduce minerals into the water as it comes out of the RO system, before it enters the tanks and other fittings that may be at risk.   I will do some research on that and report what I learn.   For now, a brand new water heater with a stainless steel holding tank.

Yesterday I installed the new heater.   It’s a lot smaller too and much better insulated.  We had this exact same unit on our last boat and loved it.  It keeps water hot for two days.  It’s made by Isotherm, in Italy and costs about twice as much as the Force Ten unit that I replaced.  I also opted for a 6.5 gallon tank, again about half the capacity of the last one and yet have found that it’s plenty of hot water.  Doesn’t it look cozy in it’s new home? 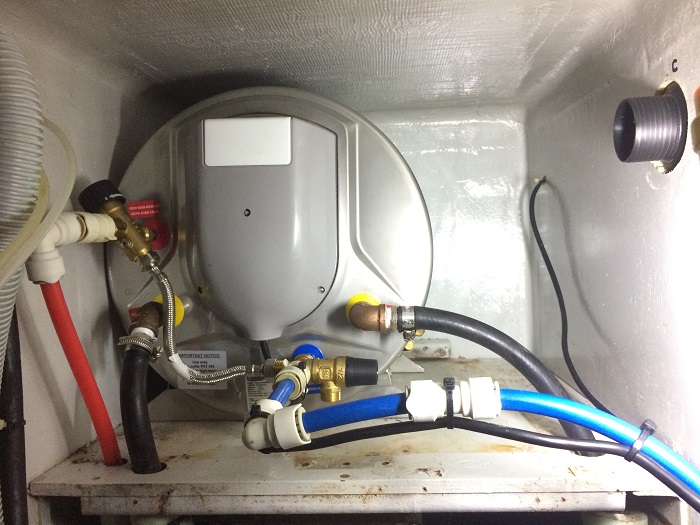 Well, plenty of room around it until the heating and AC ducting goes back in.  After that, “what heater?  I don’t see no heater…” 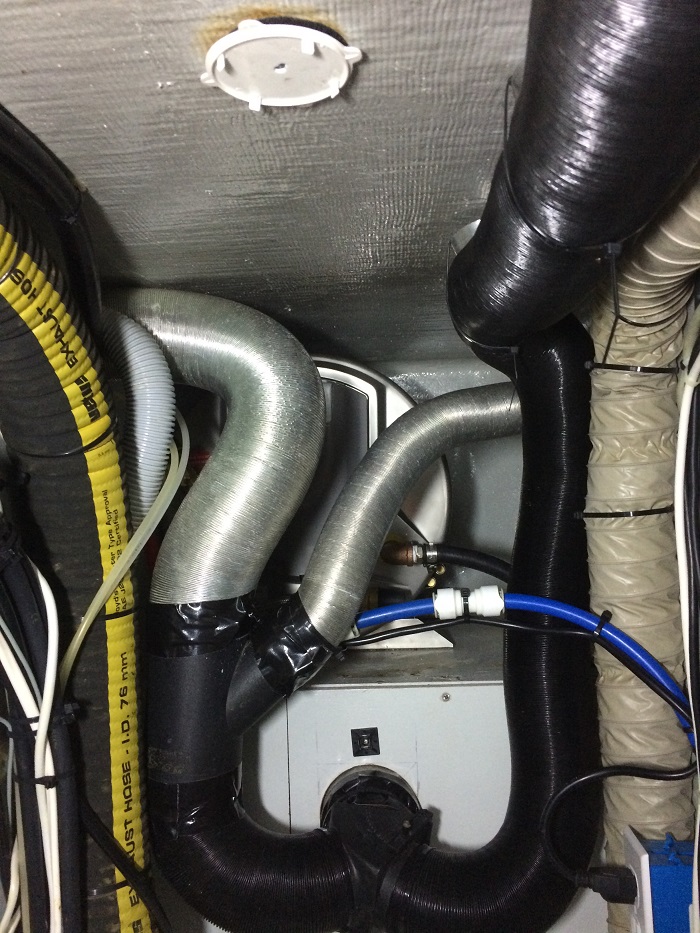 For now, everything is in place and it works.  That’s good too.

Next step, I have to modify and install the larger Spectra reverse osmosis water maker that I have from my last boat as it has twice the capacity of the one that “new” Pandora came with.  Of course, I’ll also have to come up with a way to re-mineralize the water that comes out of the system so corrosion will be less of a problem.     Having said that, I will have to review what else might be aluminum aboard that needs to be replaced.    Fortunately, the water tanks are not aluminum.  Whew!

So, there you have it.  Mystery solved.  Don’t use anything aluminum in the water system if you have an RO water maker.  Don’t tell anyone but my last boat had aluminum water tanks.  I wonder how long it would have been until they failed?   Now, that would have been a really fun project.

So, back to the title of this post and the moral of the story.  When you are deep into a survey of a boat that you are thinking of purchasing and the surveyor says “this may be a problem”, listen to him and don’t let the owner say “it’s only condensation” as it might come back to bite you.

However, there is a bit of sun under this little rain cloud as I now know about the corrosive properties of RO water and besides, we have a terrific new water heater. And, that will make Brenda happy.  Warm water, happy crew.  Or, as some have said, “happy wife, happy life”.

Next, find a way to put on a “re-mineralizeer thingy” and all will be right in the world.  Well nearly right as there are still lots of chores and time is really, really short.

As was once said, “time to make the donuts”.  Yes, indeed and be sure and listen to your surveyor!

5 responses to “Listen to your surveyor! Duh!”