Getting ready to head south. Just a few more things to do…

It’s been a while since my last poste but, in my defense, I  have been VERY busy. Good news!  The bathroom is nearly done (a PRIORITY for Brenda, but you knew that already) so now all that’s left is for the counter and shower door guys are do their thing.

Whew!!!  Now I can turn my attention to getting Pandora in shape for the run south.  And I had better get moving as I have to be underway for Hampton VA as of October 25th, about three weeks from today, or not to put too find a point on it, in 22 days.  No rush.  Ha!

The reason that I have to be underway by then is that I am participating in the run-up events for the Salty Dawg Rally to the BVI and while I am not actually doing the rally, I am speaking about our trip to Cuba last winter at a luncheon on Friday of that week.   And, to make matters worse, I will only be home, between now and when I leave for Hampton, for about half of that time, 12 days.  But, who’s counting.

And, on top of that, I am also the luncheon speaker, again about Cuba, at the annual meeting of The Corinthians on November 6th, when I have to be back home.

And, somehow, between the Salty Dawg Rally events and the Corinthians luncheon I have to run Pandora to Beaufort NC, which is about a 4 day run from Hampton.

Other than that, I can just sit around, write blog posts and eat bon-bons.  Such a life of leisure.  Not a care in the world.

“So, what is so pressing with Pandora Bob?”   Well, I have to put in a bigger watermaker and somehow deal with a leaky water heater which I am not sure is on it’s last legs or is just leaking from a fitting.  And, as with just about everything on a boat, it’s shoehorned into an impossibly small space.  I am not sure I can even get it out at all.  And to put in the new watermaker, well somehow I have to find a way to relocate other equipment to make room for the larger membrane and extra pump.

Of course, there are myriad other details to tend to as well.  However, it’s nothing like the list that I had to deal with the first year as I prepared to head to the Eastern Caribbean.  Remember that trip that didn’t happen?

Dear reader, you may recall that I tried to get to the BVI but had to abort a day or so out of Hampton because of what I’ll describe as “technical issues”.  I won’t belabor repeating the list of things that went wrong but bagging the trip seemed like a good idea at the time. Besides, if I hadn’t changed my plans I wouldn’t have ended up making the run to Cuba.  Oh yeah, Cuba. remember that?

Well, you may recall that I left Hampton with crew bound for the BVI with about 57 other boats and as we crossed the Gulf Stream, things began to go wrong.   I wrote about the details of this fun filled experience in a post on Noember 7th.   And then later in Moreheak City NC, I chronicled the issues in more detail.  At that point I still thought that I was going to resume my trip to the BVI after Thanksgiving.  Oops, change of plan, again.

If you can stand yet one more link to ancient history, I was reading back through my posts from last November and recalled a post, where I wrote in all seriousness and for the first time, “hey, I wonder if we can get permission to travel to Cuba“?   Hmm… There’s a thought.  And we went.  But then you already knew that.   And one thing lead to another and I ended up taking Pandora to Florida and then began in earnest to do my best to “make lemonade out of lemons” and head to Cuba.

On the off chance that you missed it, all the posts from March and April are about Cuba and our travels.  And, not to put too fine a point on it, but there are 19 posts in those two months that I somehow managed to put up in spite of the HORRIBLE Internet access in Cuba.

So, here we are, full circle and I am planning on heading to the Caribbean once again.  Perhaps this time I’ll actually make it and, as I so often say, “details to come”.

About those plans.  The broad strokes are this.  I plan leave to head to Hampton VA later this month, spend a few days there and then head to Beaufort NC where Pandora will sit in a slip until mid January when I will join crew for a run to the BVI and a good deal of the winter aboard.  I say “good deal of the winter” as Brenda and I are going to be grandparents in mid December and unless you are one, a grandparent, you can only imagine how big a draw that will be for us.

And, add to that, Brenda’s bout with melanoma last spring and you can see that there is a big ??? regarding our time afloat going forward.   So, how long will we be in the Caribbean?  Who knows but I am going to give it a shot and we’ll see what happens.  Me determined?  As Brenda will tell you “YOU HAVE NO IDEA!”

But, before I break to head off and work on Pandora, I thought that it would be neat to talk about our visit to RI to Life Raft and Survival equipment, where we had our four man Viking Raft serviced.  Of course, anyone that heads offshore and doesn’t have a raft on board is, in my opinion, nuts.

We have a Viking life raft and it was due to be repacked.  Actually, it was more than a year overdue for it’s three year repack.  Oops!  I thought that it would be fun to be there when they inflated it and checked out the raft contents.

Life Raft Survival Equipment (LRSE) is a pretty scary name for a business but it would be a LOT more scary to be on a sinking boat without a well maintained raft or worse, no raft at all.  This is one piece of equipment that I sure hope will never be used.  As you can imagine, Brenda’s feelings on this topic are a bit stronger.

Anyway, our raft is a Viking four man offshore raft.  We chose it because it was not too expensive, if you can call $3,000+ not too expensive, and it was a good brand used by many cruise ships and commercial boats.    It’s in a valise pack which means it’s in a fabric pack and must be stored in an area where it won’t get wet.  It’s vacuum packed which suggests that it’s waterproof but we were shown a raft just like ours and the same age that had gotten wet.   It was a mess and probably had to be junked.

The tech put it on the floor, out of it’s soft bag.   The shrink wrap is silver and pretty tough. 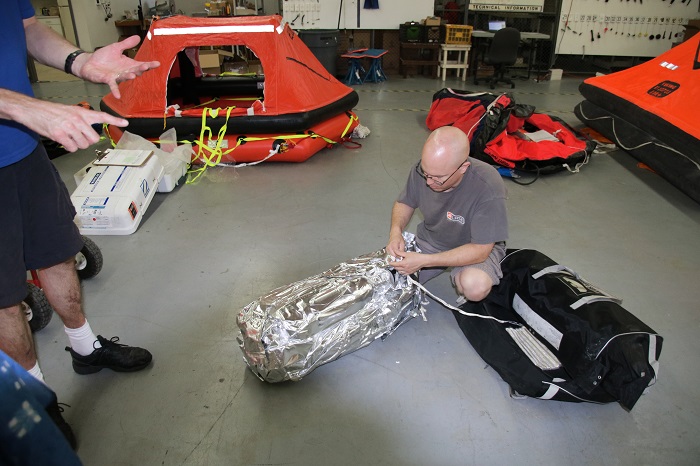 Normally it would inflate with CO2 in a rush of compressed gas.    However, in this case he attached a compressor and inflated it in a more controlled way. 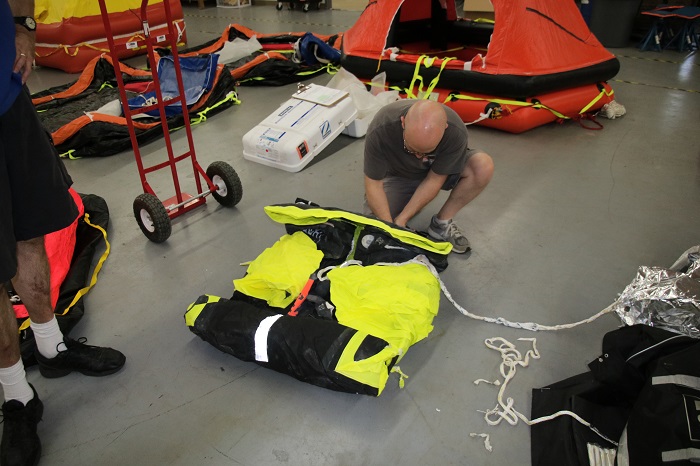 It still inflated fairly quickly, in just a few minutes. 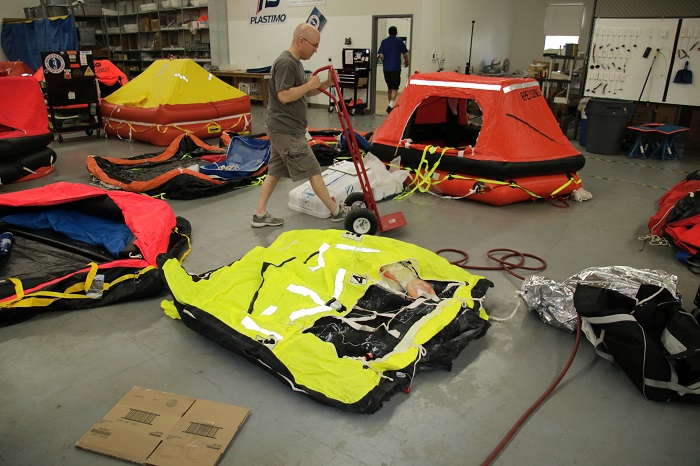 The arch and canopy started to take shape. 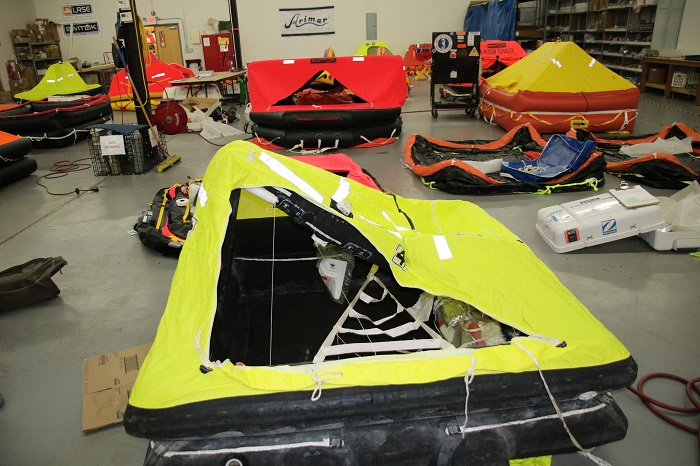 Then it was fully inflated and the pressure release valve was hissing happily. 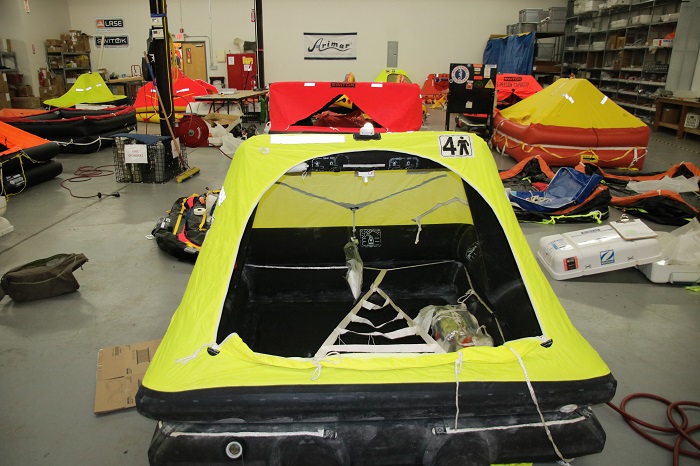 It was like opening a VERY EXPENSIVE present.   What’s inside? 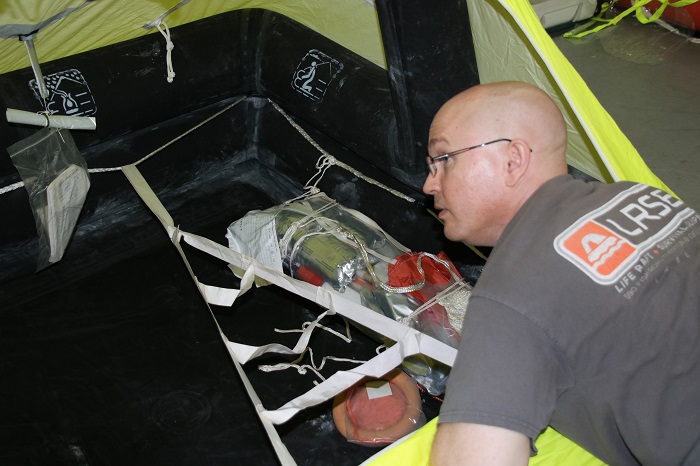 We unpacked all the “perishables”.  They didn’t look very perishable to me but everything had to be replaced.  I asked them to save the stuff for my ditch bag.   Spares or not, I sure hope that they never get used.   And, if they do and Brenda’s on board, well, let’s just say that I wouldn’t put a big bet on future cruising. 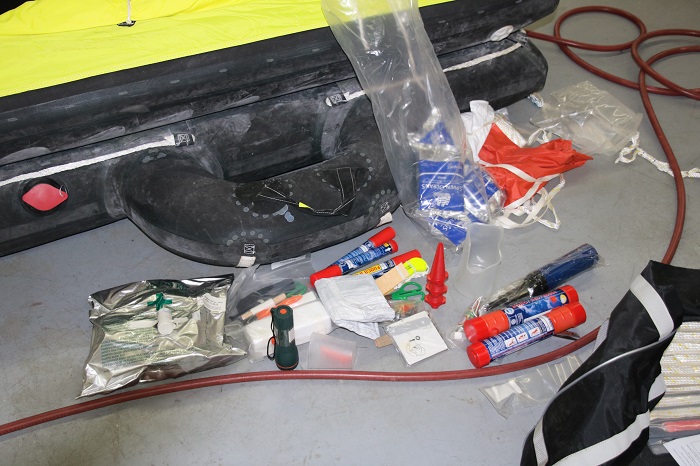 Good news, the waterproof compartment in the cockpit that houses the raft kept it completely dry so repacked it’s as good as new and back on board.

LRSE has presented at my June SSCA event in Essex for the last few years, complete with a live life raft inflation.  I hope to have them back again in June 2017 but want to be sure that we keep the demonstration fresh so perhaps we will go though the contents of a raft and ditch bag and review each item.    For me, seeing our raft inflated was the first time I had ever seen the contents in any detail.

With a newly serviced raft I can be confident that when I head south that there’s a well maintained raft available, if needed.

I also have to begin boning up on the cruising guides and charts that I have for the Caribbean and I have a lot of them. 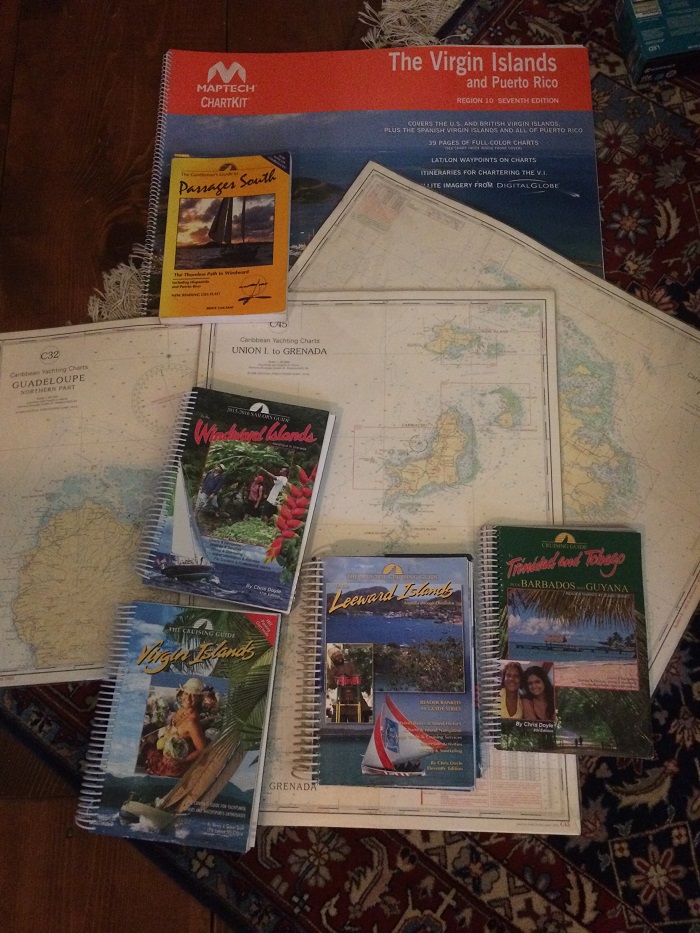 Yes indeed, lots to do and time is short.  I had better get to work on Pandora or I’ll find myself sitting in an armchair in front of a fire reading about cruising instead of doing it.

One response to “Getting ready to head south. Just a few more things to do…”