She’s back in her shed. Back to real life for me.

It’s Monday afternoon, I am alone aboard and the boat is all snug in her slip, er shed.  We arrived in Ft Lauderdale at dawn today, just as the eastern horizon was brightening. 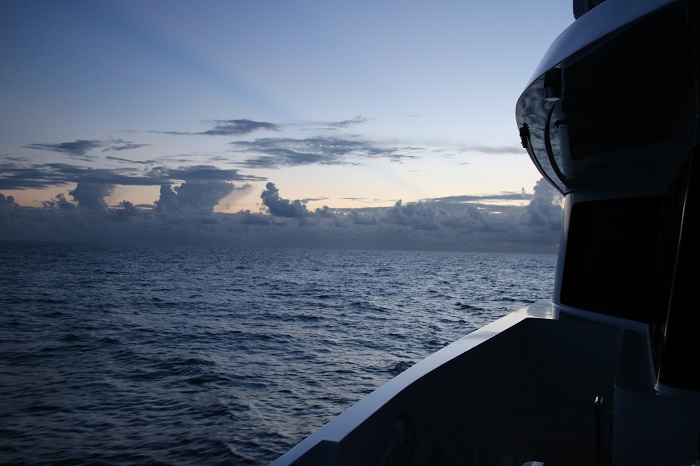 Now, here’s an amazing coincidence…  You may recall that the first thing I saw as I boarded the ferry in New London to join the boat was a sub and, as luck would have it,  that was the last thing I saw as we headed into the Port Everglades channel into Ft Lauderdale.   No AIS but I am pretty confident that she wasn’t the USS New Mexico.   Note the port running light.   How about subs as bookends to an amazing trip?  You can’t make this stuff up.   Really… 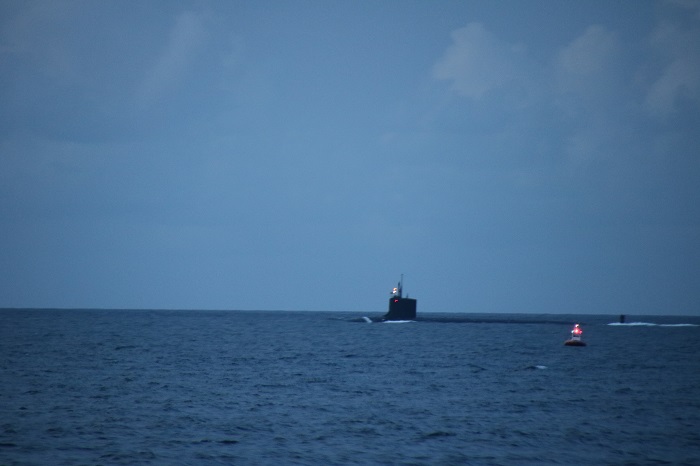 It looked like Ft Lauderdale had it’s own little rain cloud hanging over it.  Well, not so little. 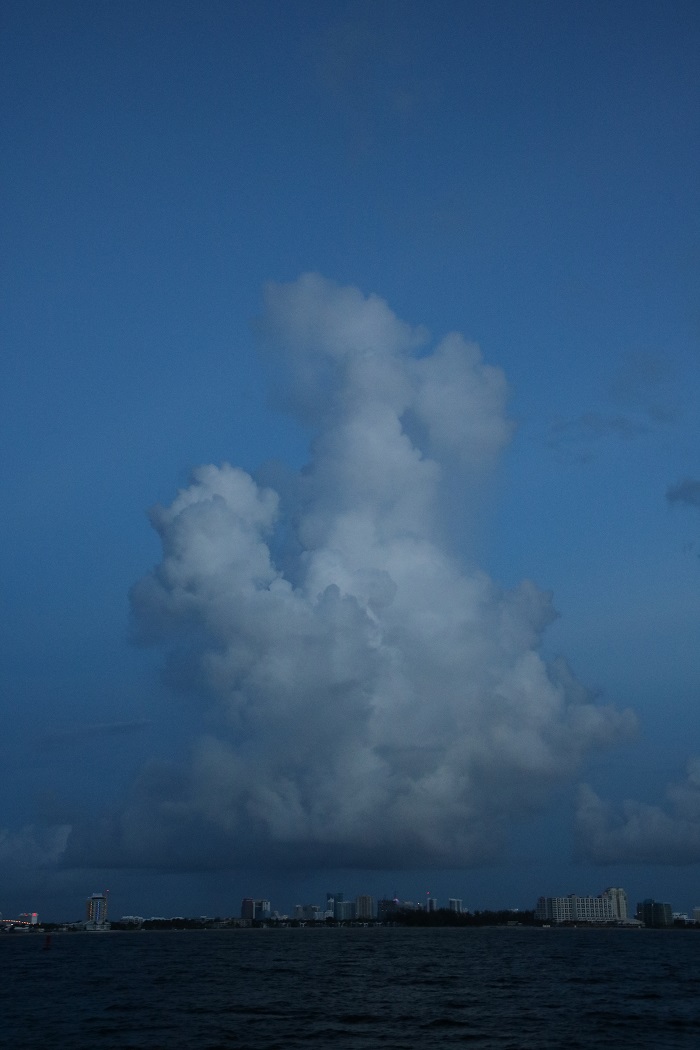 As we entered the channel, we passed this pontoon boat heading out.  Back in the early 70s everyone thought it would be a great idea to make an artificial reef out of two million discarded tires tied together and sunk off of the beach. 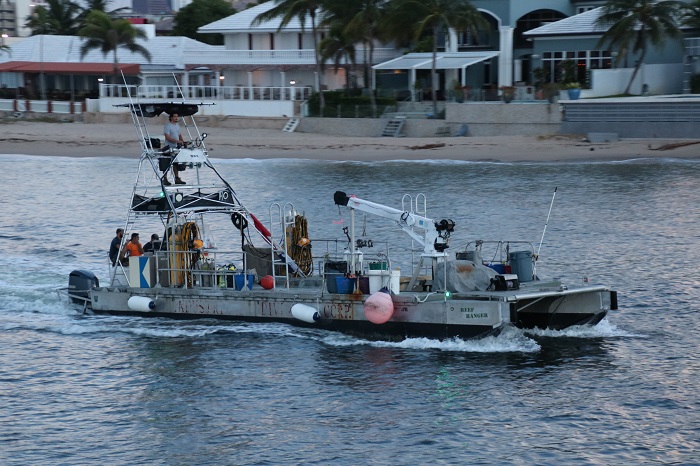 Well, it turned out to be a really bad idea as nothing will grown on them and now the fastenings that hold all of them together are breaking down and tires are beginning to wash up on the beach.  Some have even drifted as far north as the Carolinas.   Oops.    This guy has the contract to remove them one by one and he’s only able to go out about half the time and brings in something like 30 tires at a time.  Do the math.  2,000,000 divided by 30 tires.

Coincidentally, way back when, the project was christened “The Osborne Reef”. No relation, I assure you.  Besides, they spell it with an “e”.

Like so many best laid plans, the reef “seemed like a good idea at the time”, Oops!  It’s going to take years and years to fix as they began removing tires back in 2009 and they aren’t even part way done.   This guy will probably be at this project for the rest of his life.  And you wondered where those tires off of your old AMC Hornet went, Sheryl.  Now you know

Just after clearing the 17th street bridge we turned left into the first canal.   It looked impossibly tight to me. 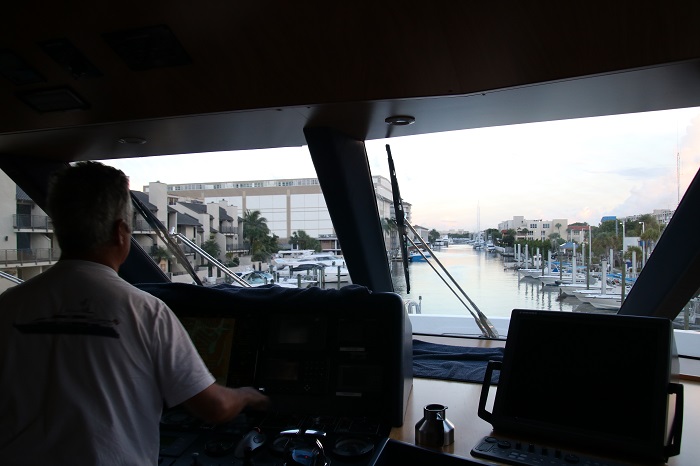 We approached the boat house on the left.  It’s the only facility like it in Florida. It was originally built to house a boat that one of the owner’s cousins has and still keeps there.  It costs $12,500 a month to keep your boat here, and they have to pay year round, even if they aren’t there, so they don’t loose their spot.

Sometimes they find themselves paying for three slips at the same time in various places so they won’t loose their spot. Speaking of “slips” that word sounds entirely to tiny for such a big space.  Perhaps “maw” would be more descriptive word.  “Let’s keep the yacht in the MAW tonight boss”. 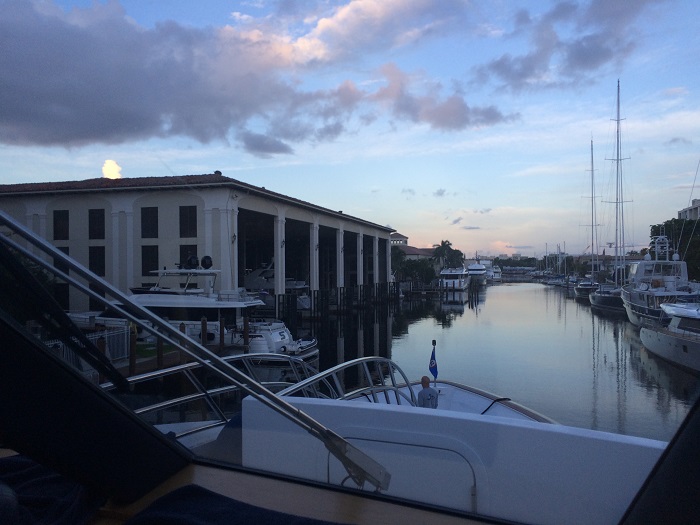 As we approached my pulse started to rise and I was just a spectator.   “No biggie, we’ve done this thousands of times although it’s a bit trickier in the dark.”  Show-off!

The distance between the shed opening and the far side of the canal is shorter than the boat is long.  This means that they have to put the bow into the shed on an angle and slowly work the stern around without raking down the side of the 80′ sailboat that’s tied up across the canal.  As all of this is happening, the captain can’t even see the stern and has to rely on the First Mate Pete to guide him.  “2′ clearance Cap, you’re in great shape.”  Really, 2′? 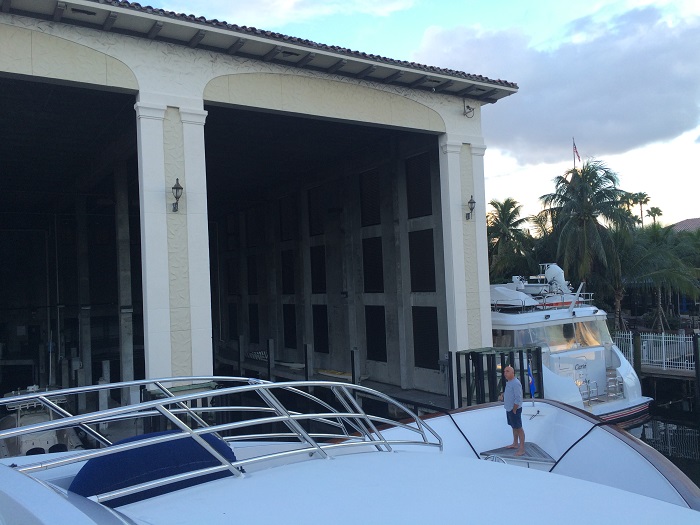 The chef, stationed up on the bow, held up fingers to let the captain know how much distance there was between the starboard bow and tons of concrete.  At one point just two fingers went up.   Two feet and they didn’t even have a fender out in case things went south.   No fenders out because there wasn’t enough room to squeeze in a fender between the boat and dock.  YIIIKES! 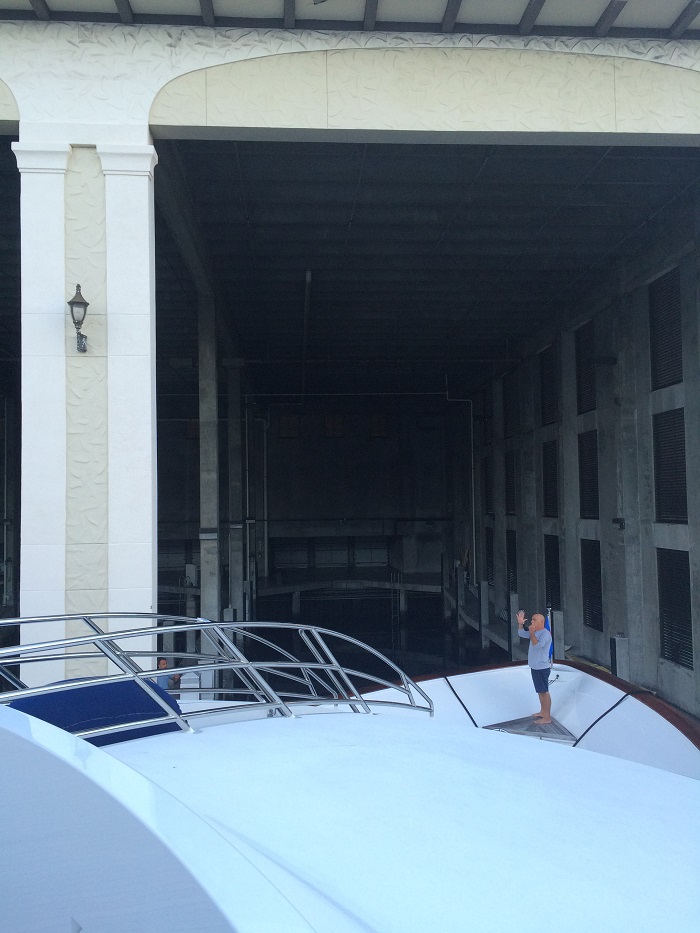 Easing into the slip?  Maw?  Cave?  Oh S#$%!   For scale, the three doors in front of the bow are full sized garage doors. 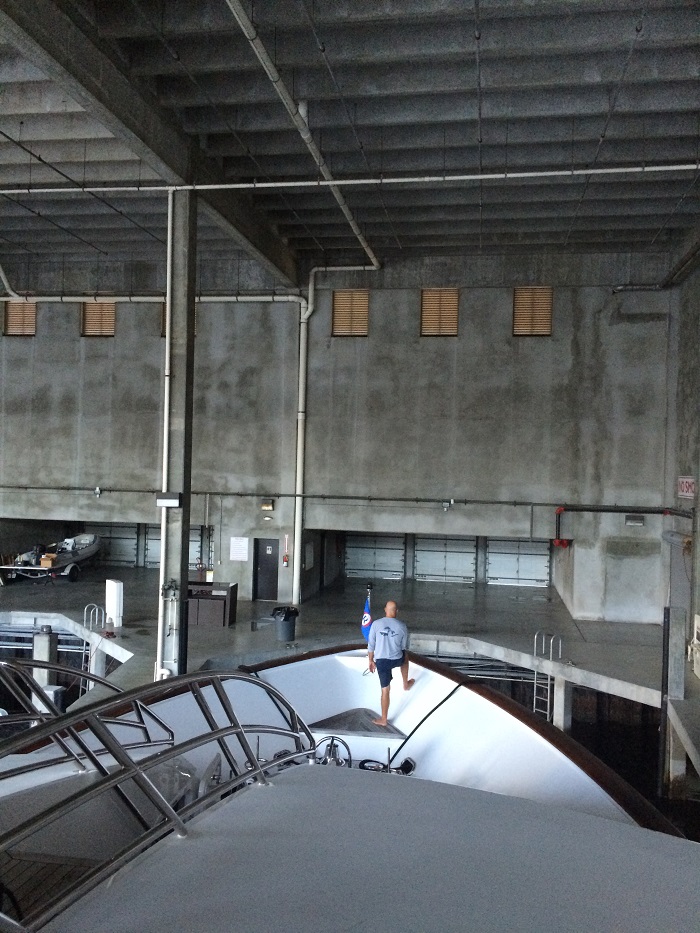 Anybody have a tub of KY? 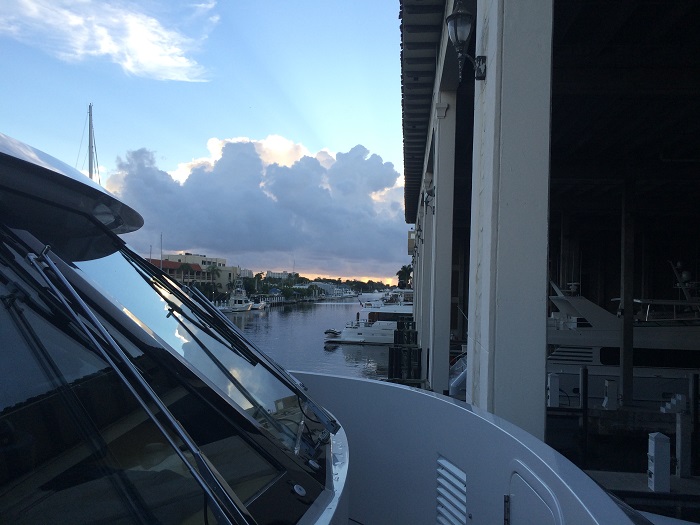 I couldn’t believe it.  No fenders and a perfect fit with less than two feet on each side… 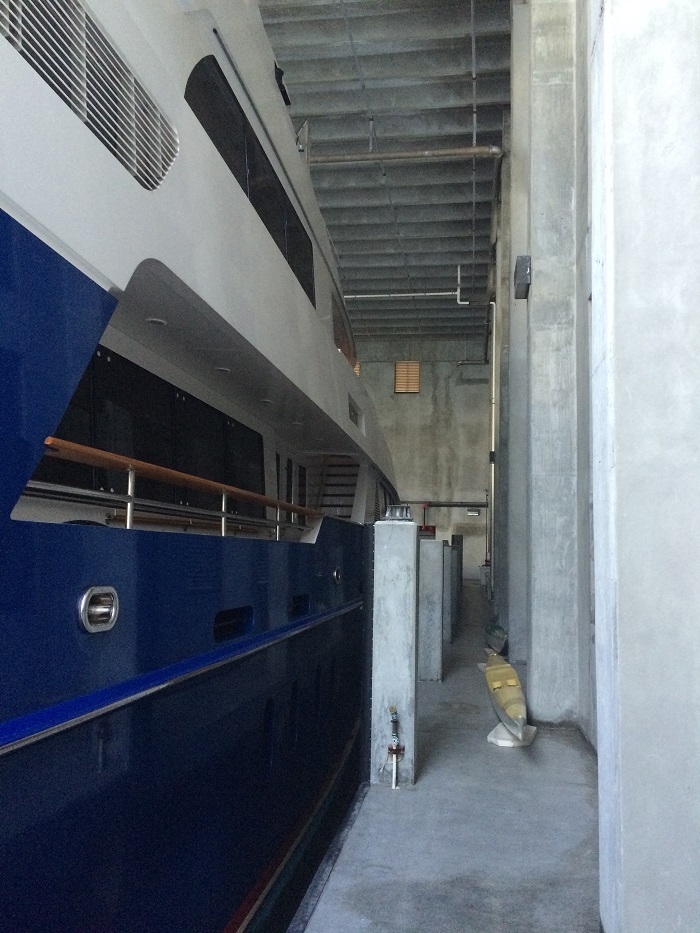 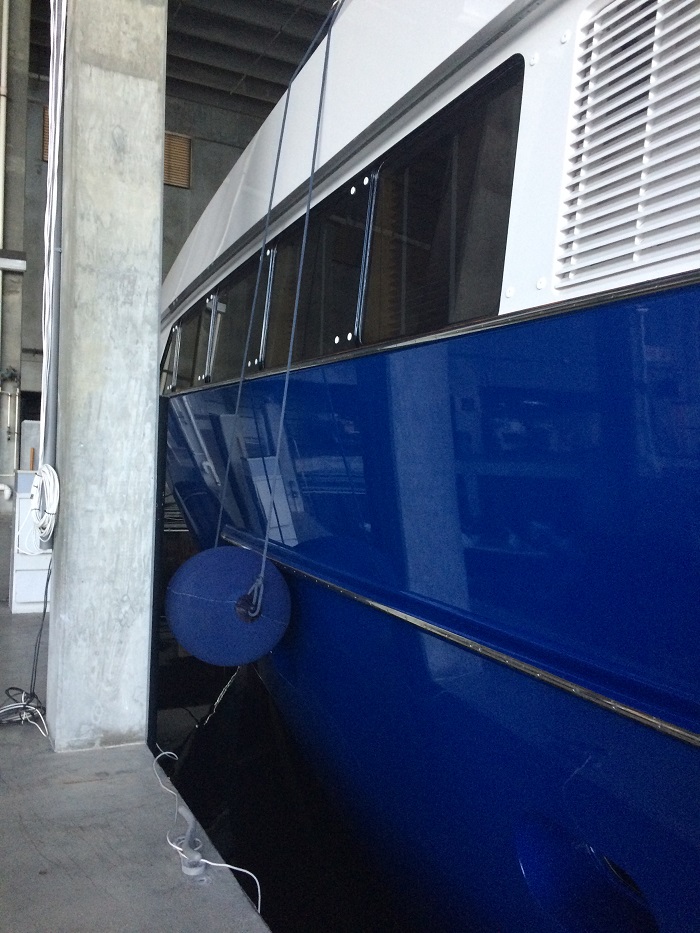 “Look Captain Mark, I can touch the bow with my hand.” 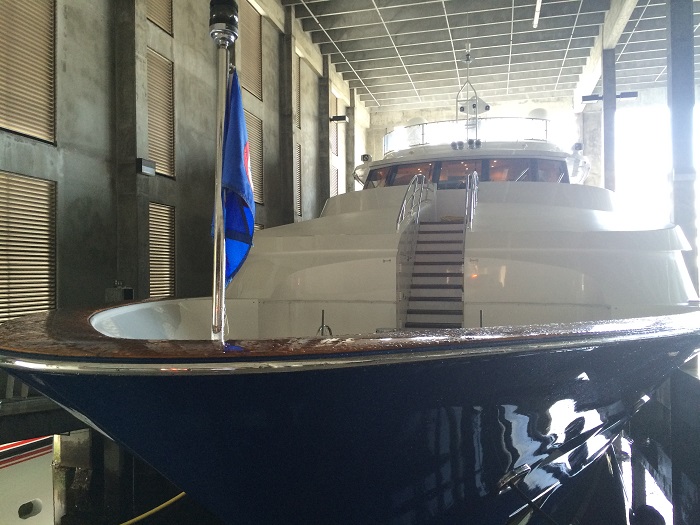 She doesn’t look all that big in the shed after all.  Besides, she shares it with 5 other boats.   Big shed indeed 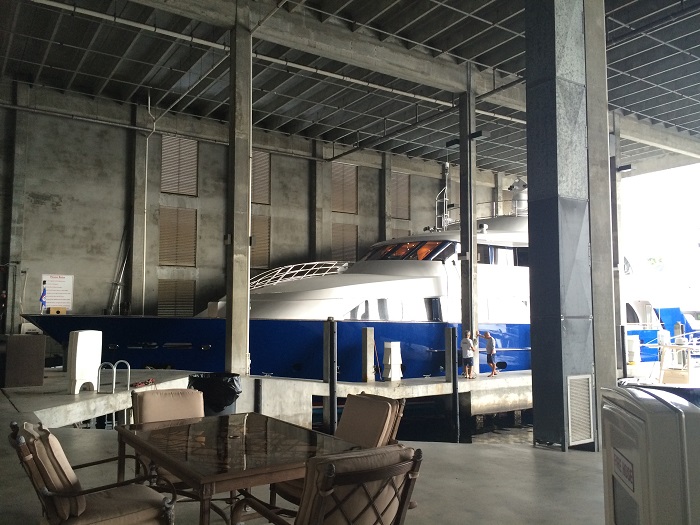 Cool as a cucumber, Captain Mark, completing his log.   All settled without a scratch. 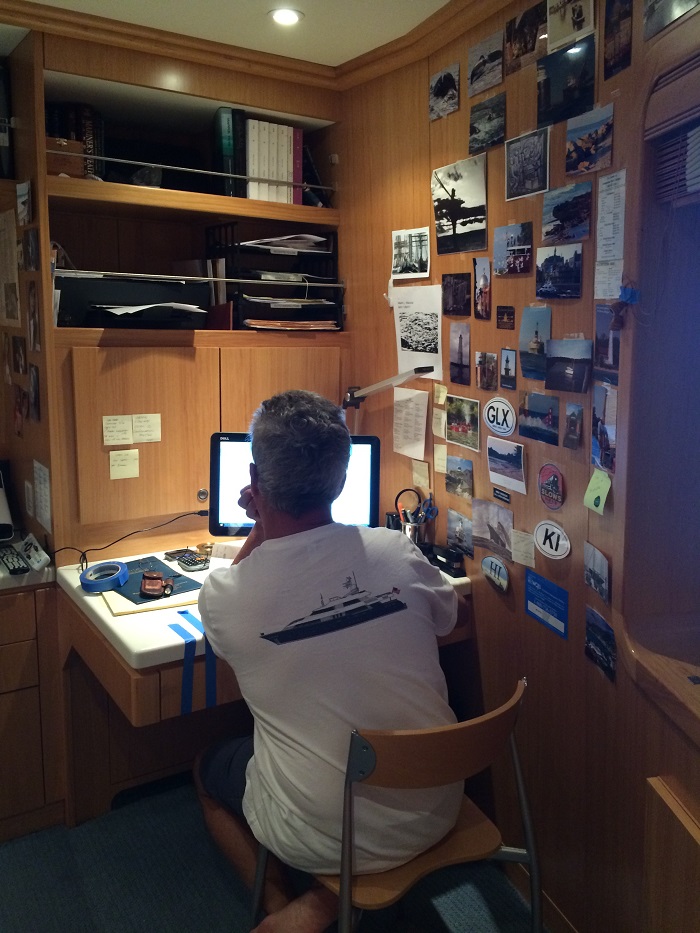 What do you say Brenda?  Want to try that with Pandora.  No, that would be a CLM (Career Limiting Move) for sure.  I’ll leave this sort of maneuvering to the pros.

So here I am alone aboard as everyone bolted shortly after securing the last line and washing the salt off.  I can’t say that I blame them as they haven’t had a break in 3 1/2 months.

In a few days they will be hard at work again chipping (poor choice of words) away at Captain Mark’s to-do list.  No rest for the weary.

Me?  I’m flying back home tomorrow to renew work on my own list.  I expect that the lawn will need mowing.  Real life, here I come.

Captain Mark?  Need crew?  Take me away.  I may be available but not until I finish remodeling the master bath.

5 responses to “She’s back in her shed. Back to real life for me.”