Settling into life at sea

It’s Saturday morning and I just got off watch.  We passed Cape Hatteras last night, shortly after midnight, which marks the half way point to Florida.  At the current pace, we should arrive in Ft Lauderdale on Monday, making for a four day trip.   With Pandora, the same distance would take about twice as long.

Actually, as going south is against the prevailing SW winds, it’s not likely that a run with Pandora could be accomplished in much less than two weeks, with time spent waiting for good weather.   Motoring into seas like we encountered yesterday would be very uncomfortable.

However, the fact that Pandora only burns about 2% of the fuel takes some of the edge off of the longer time needed to get there.    Running through 4,000 gallons of diesel for each run would be pretty painful to our budget and when Brenda groused “that damn boat”, she’d really mean it.

With six of us aboard, we are split up into three groups, with two on the bridge at all times.   Mark, the captain and I share watches from 04:00 to 08:00 and 16:00 to 20:00.   To be sure, Mark is the guy that does most of the work but I am there to be and extra set of eyes and to keep watch if he has to leave the bridge for any reason.  With all of the systems on board, there is always something that needs his attention or some alarm that is going off.   Also, somebody has to go below and take a look in the engine room several times during a watch to be sure that everything is running well.

I set an alarm for about 30 minutes before I have to begin my watch and it is customary for the incoming watch to arrive 15 minutes before so they can observe traffic in the area and to become accustomed to the dark before the standing watch is relieved.

Yesterday was quite rough and we were pounding along with the boat seeming to fall off of a wave periodically.  In a normal seaway, every now and then, perhaps every ten waves or so, one will come along that is much larger, perhaps twice as big so it isn’t uncommon to have the boat lurch unexpectedly when you least expect it.  As we were powering into the waves and against the wind, yesterday was a noisy and bumpy day.   The steward, Heather, wasn’t feeling too well which I can understand as the crew quarters is set way up in the bow where the motion is the worst.   In the nanny cabin,  I have it great as it’s near the center of the boat, where the motion is less.

Overnight things calmed down considerably and we should have a smooth ride for the second half of our trip.   It’s a beautiful day. Nice view from the bridge. 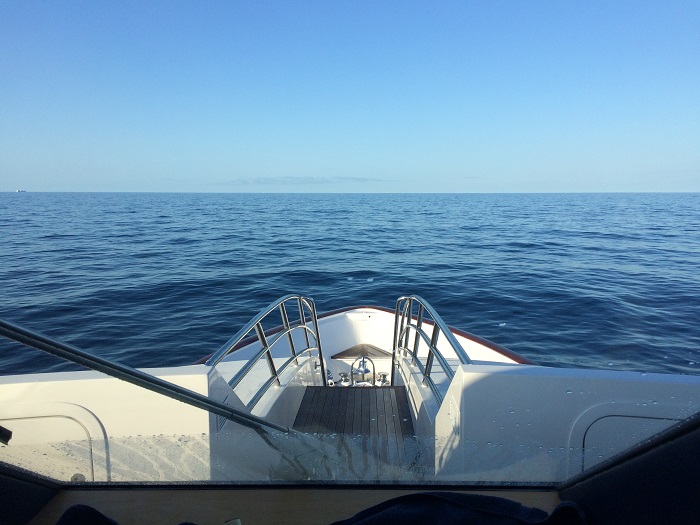 I haven’t poked my head outside since we left Greenport NY and was stunned to see how much warmer it is after just two days.   It’s pretty chilly aboard as the AC is running all the time.  And it has to be on as the carpets are silk and the wallpaper is delicate bamboo.   Very light and airy.

This is one of the owner cabins.   The spread and pillows are beautifully monogrammed but I had to block it out as the owner is sensitive about privacy. You’ll just have to imagine lovely gold letters of the boat name.  Quite elegant and you can see a women’s touch in the decor.  Of course the owner, and it’s a woman, isn’t aboard for the delivery.   Just love the rope lighting under the bed. 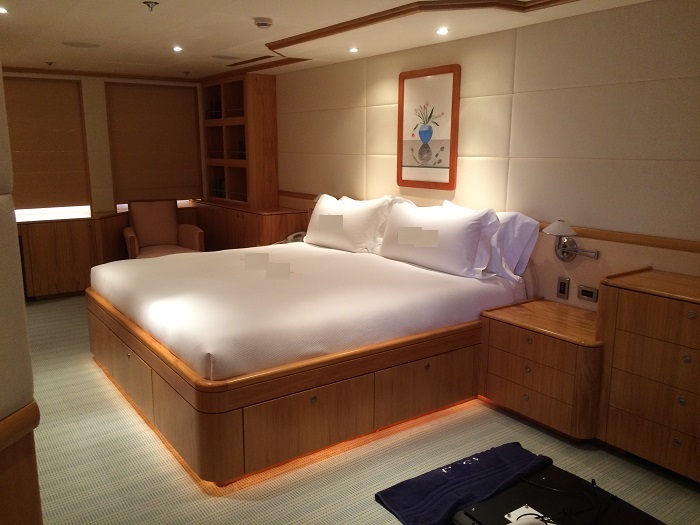 There is a very nice and secure walk area down the side of the boat.  It’s a beautiful spot to stand and watch the world go by.   Beautiful teak decks and a perfectly varnished rail.  It’s a lot of work to keep up all of this and hours a day are spent making sure that all parts of the boat are clean and polished. 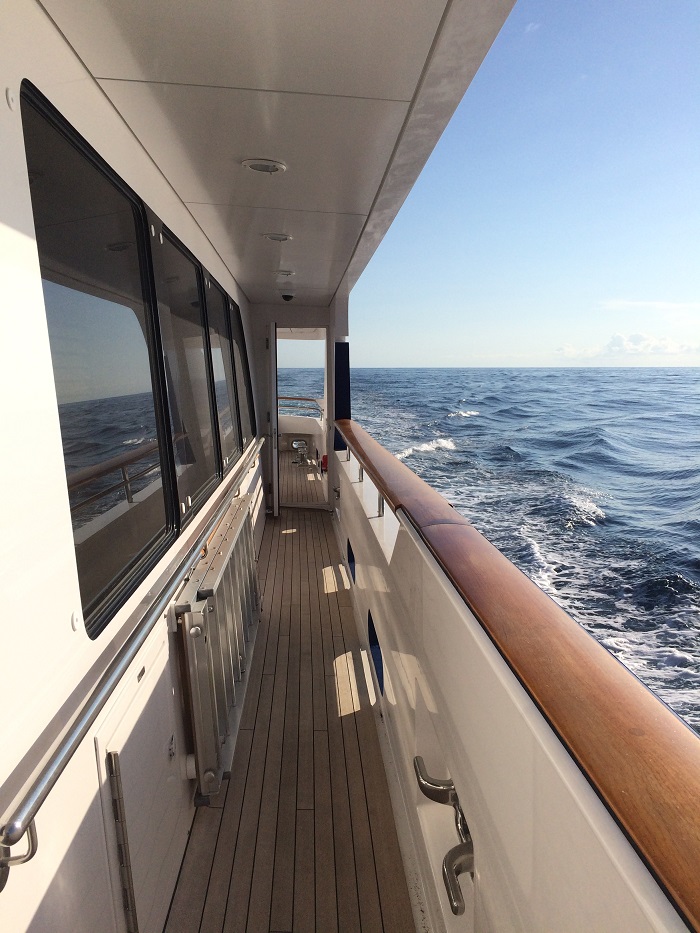 I spend 8 hours a day sitting in the right helm seat.   Very comfortable. 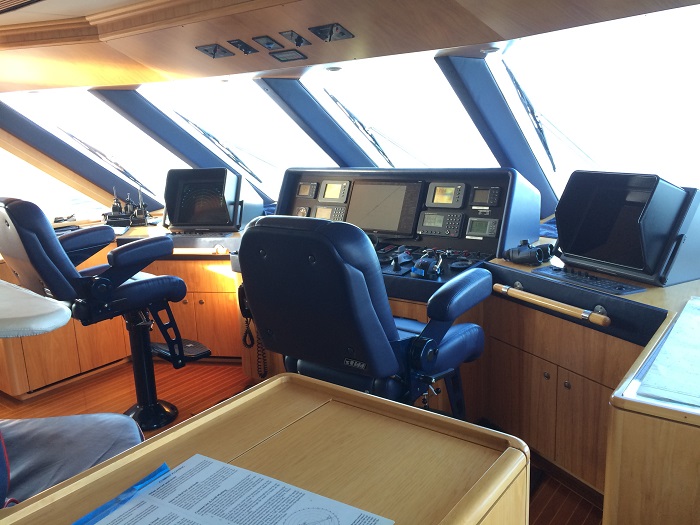 My four hours spent in each watch passes quickly as there is a lot to keep track of .  And, when Captain Mark isn’t filling in the log each hour with all sorts of vital stats, we have plenty to talk about.  I’d love to share some of his stories he’s told me about his years afloat but I might be tossed overboard if don’t keep my mouth shut.

I can only imagine what this instrument panel cost to assemble.  No coffee on the dash.  Spill something here and you are….  Well, it wouldn’t be pretty. 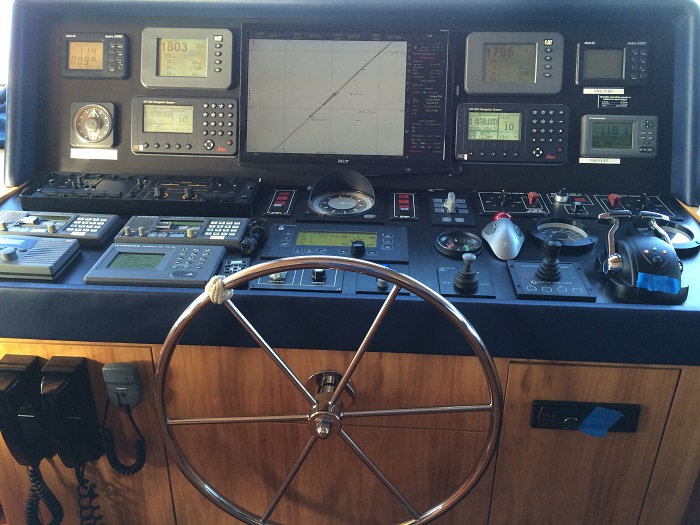 As my watch was ending this morning Chef came to the bridge and asked what we’d like for breakfast.  How about an omlet and toast?  Ok, if you insist.  I resisted the impulse to photograph what turned out to be a perfectly cooked cheese omelet.  Yum!  Ten minutes later I took my plate down to the galley to put it in the dishwasher and you’d never know that anyone ever cooked there.   If Pandora had a galley like this my biscuits would be even better.   Of course, the weight of the granite counters alone would sink her. 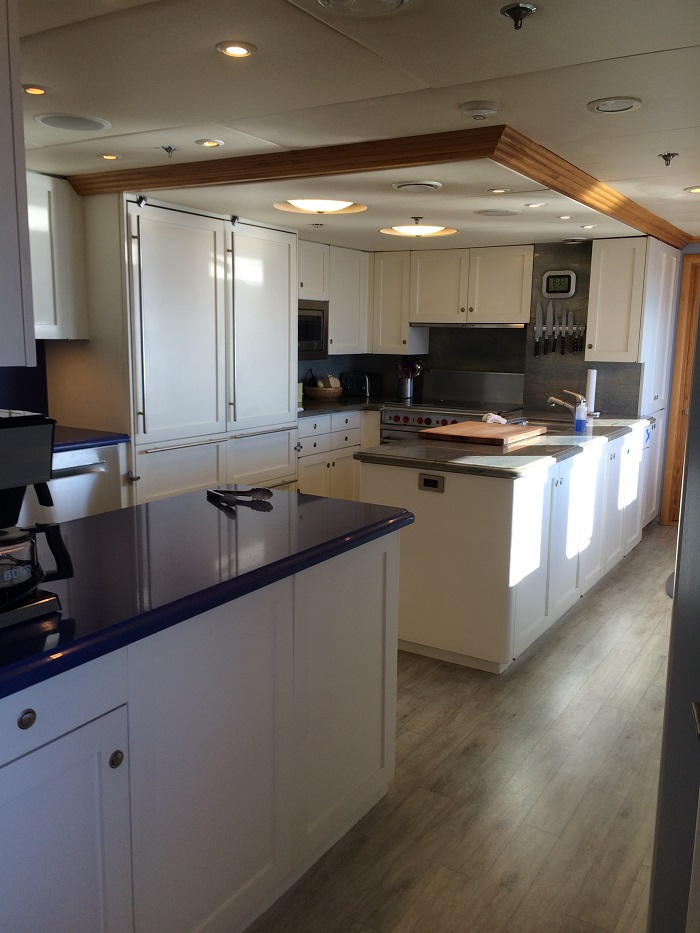 This is the crew mess, where we take our meals.  The TV is always going and there is an endless selection of chips and cookies.  “Bob, pace yourself!”  “Ok, I’ll have an orange.” 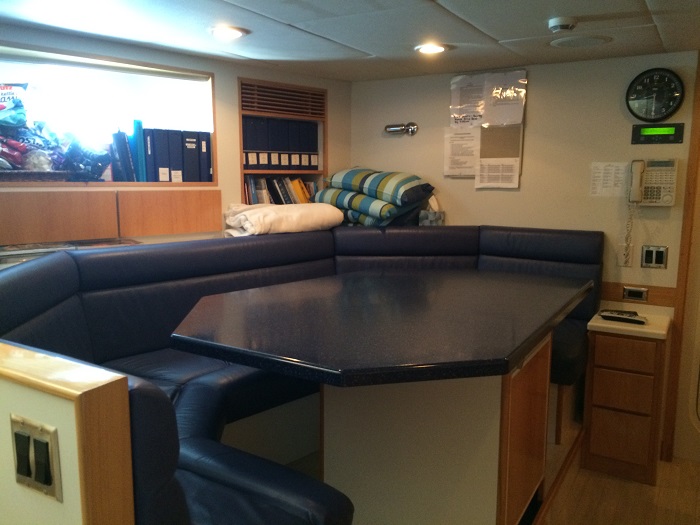 Safety aboard is key so there is a laminated disaster plan and boat schematic posted for everyone to see. 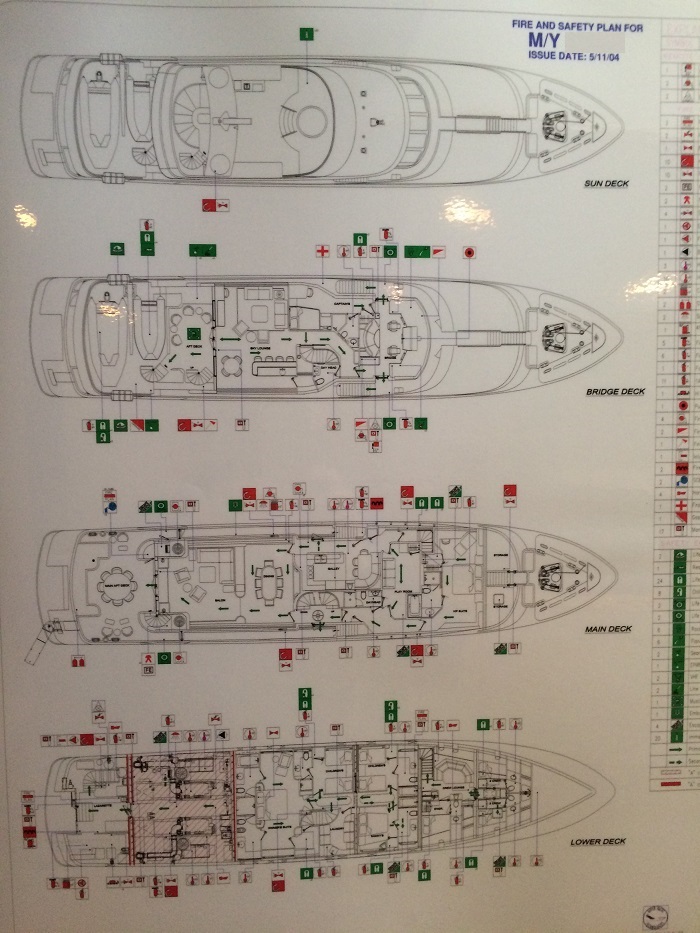 Perhaps I’ll spend some time today hanging out at the stern watching the wake behind us.  What a sight. 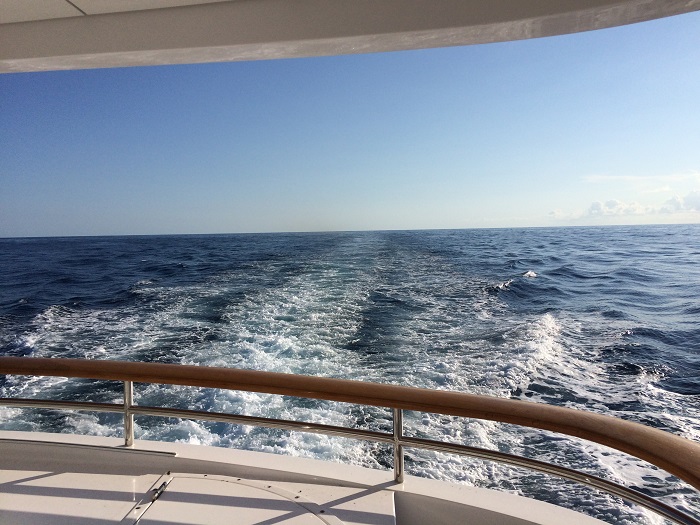 So what next?  I asked Anthony, the engineer, to spend some more time with me checking out the engine room and systems.   The machinery that keeps us moving, comfortable and safe is very complex and he has to be capable of fixing just about anything that can go wrong along the way.

We’ve settled in nicely to life at sea and it’s turned out to be a terrific voyage. When we get to Ft Lauderdale I’ll be giving a presentation about Brenda’s and my two months in Cuba to the crew along with the captains of some of the other boats.   That should be a lot of fun.  Besides, I have to earn my keep.

I understand that they keep the boat, all 130′ of her, in a shed, along with a half dozen other boats in Ft Lauderdale to keep her out of the weather and safe in the event of a hurricane.  It’s hard for me to imagine a boat shed big enough to house this boat along with several others.    That will be something to see.

Oh yeah, I guess Mark is happy with me so far as I found a few crew t-shirts neatly folded on the foot of my bunk this morning when I returned from watch.   Well, it is either that or I am beginning to smell a bit off.  Whatever the reason, happy me.

As Steve Martin exclaimed in the movie “The Jerk”, when he saw his name in the phone book, “Now I am somebody!”.   “Yeah, yeah Bob, nice shirt…don’t get ahead of yourself” 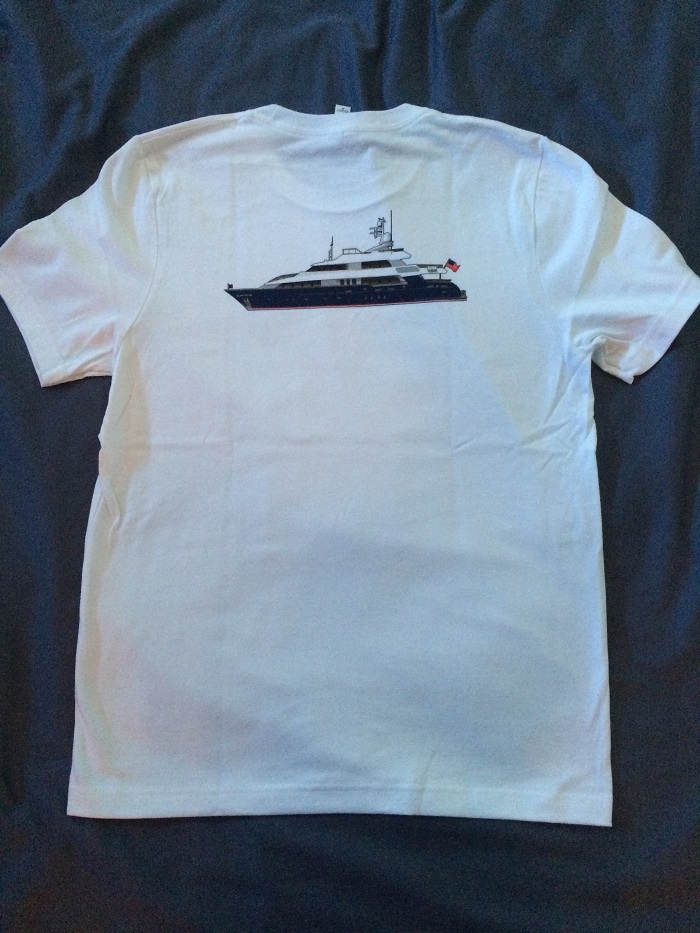 Say what you will, this is fun.  Totally!

6 responses to “Settling into life at sea”