>The fictional character Phileas Fogg in the novel Around the world in 80 days by Jules Verne, first published in 1873, circumnavigated the world on a combination of rail and steam ship on a wager of   £20,000 set by his friends at his social club.  This feat today and it’s current real life record holders is memorialized by the “Jules Verne Trophy” that resides in Paris.    The current record holder did the trip in a trimaran very recently early in 2010 in just under 48 days, 8 hours.  This boat, also from France hopes to do the trip in 40 days.  The attempt will be made in 2012 in a boat capable of a top speed of 50kts.  It’s hard to imagine the boat going that fast much less holding together for the whole trip.

This video is a bit long, and is in French. However, it’s got some amazing footage of the boat underway. It’s the current Jules Verne record holder from 2006.  Well, I guess that the true feat is to make it around in once piece and a bit faster than the other guy.   Unlike the rest of us, these guys head into bad weather so that they can get a bit faster time.

Even better than the boats that sail for the trophy, is the sculpture itself by American artist Tom Shannon, known for his remarkable pieces, some of which float in the air on a magnetic field or suspended by wires. Check out his site for some amazing photos of his work.

The sculpture that he created to serve as the perpetual Jules Verne trophy and the holders of the trophy through the years are described in Wickepedia.  The following is an excerpt from the description.

“The “Trophy Jules Verne”, placed under the high patronage of the French Culture Ministry, was the subject of a public order of the visual arts delegation with the American artist Thomas Shannon.
The work is a floating hull on a magnetic field moored by a cable as an anchor retains a ship. All dimensions have rigorous symbolic meaning. In proportions, the midship beam of the hull correspond to the diameter of the Earth. The ray of each end is proportional to that of the moon. And the radius of the curvature of the frames is that of the sun. The competitors of the Trophy Jules Verne race around the Earth against time, with only the sun and the moon as companions and time keepers.
The sculpture is placed on a cast aluminum base, on which the names of the sailors having won the Trophy are engraved. The French National Navy museum in Paris hosts and maintains the Trophy. Each of winners received a miniature counterpart of this Trophy, magnetized like the original one. 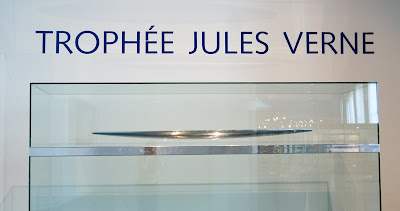 During an official ceremony, the precedent holder gives the Trophy to the victorious crew who receives the hull and must moor it in the magnetic field.”

A remarkable trophy for a remarkable voyage.  While I will have my own voyages I don’t think that I lust after the excitement that these guys seek.