Off to Maine, finally.

It’s been five years since my last trip “down east” and this morning I cast off the lines and am on my way.   If you happen to wonder if I got the bathroom finished, the one I wrote about in a few posts of late, I have to confess that the answer is, especially if you ask Brenda, an emphatic, if unfortunate, NO.

Unfortunately, I did WAY underestimate the time it would take and the job is looking, to me at least, more like a major addition on an office building than a simple new vanity and shower enclosure.  Oh well.  I can’t be totally faulted for coming up short (I was supposed to have it done before heading to Maine) as there were myriad distractions that I won’t go into.  It’s sufficient to say, and I cling to this belief, that many of the distractions that got in the way of completing the task were NOT MY FAULT!

Ok, now that I have that off of my chest so back to the task at hand.

As I begin this post Pandora is in Block Island Sound making our way to Cuttyhunk island for the night.  My crewmember Rodney, who I have sailed with for perhaps the last decade, off and on, is with me and we are enjoying a lovely day of sailing.  Well, we were sailing up until I stopped typing to put on the engine again as we still have a good distance to go and I want to get there by dark.   In the morning we will head to the Cape Cod Canal to catch the flood tide around 10:00.  Going against the tide in The Canal is a waste of time as the current runs as much as 4kts which makes the 10 mile run interminable when things are “against you”.  Besides, I believe that it’s actually against the rules for a slow boat to traverse the canal against the current.  With that in mind, “going with the flow” really means something when it comes to the Canal.

We left around 06:30 today, heading down the CT River and had to stop for fuel which cost us nearly an hour but that is certainly better than being stuck with no fuel miles from shore.  Yes, been there, done that at least once years ago off of New Haven and I’d prefer to avoid an encore performance so stop we did.  That was a very good thing as it took nearly 60 gallons and I nominally hold about 150.  I might have made it to Maine (that’s where we are going) with what I had and the 10 gallons in reserve but I wasn’t in the mood to test the theory.

After being “on the hard”, me at least, since mid May, I am very happy to be on board again.   It will be fun to rendezvous with some old friends from The Corinthians, a group that we have been a member of for many years.

So, the plan is to spend tonight at Cuttyhunk and to head out of the Canal and across the Gulf of Maine tomorrow morning.   If all goes well, we will be in Maine on Thursday afternoon.   The actual run across the Gulf of Maine is about 24 hours so we’ll have a few days in Maine to enjoy the sights prior to leaving on the week long cruise that kicks off on Saturday evening.

So, for now, I guess that about covers it.  And don’t forget that we “push the button” every 4 hours or so and you can see where Pandora is by going, incredibly enough, the “Where in the World is Pandora” button on the blog home page.

As we passed New London this morning the Brilliant, the schooner from Mystic Seaport, passed behind us.  Pretty nice digs. 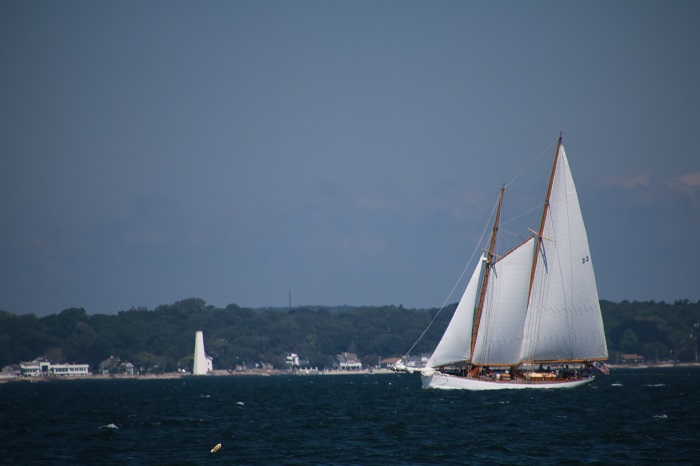 So, I guess I’ll close with a shot of one of my favorite sights in Fisher’s Island Sound, the lovely home on “North Dumpling”.   As  Brenda would say, “I would live there”.  Indeed.  Loved the whole “stonehenge” thing on the yard. 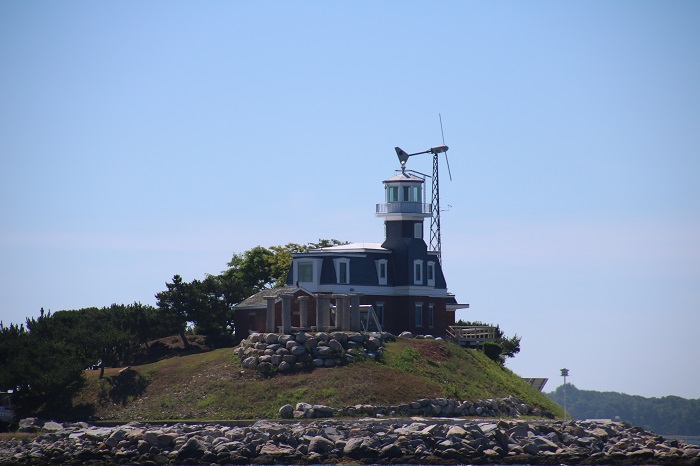 Tomorrow, the Canal and hopefully, we will see some whales as we cross the Gulf of Maine.

One response to “Off to Maine, finally.”