It’s Memorial Day weekend and we are NOT out sailing aboard Pandora.  After a winter aboard we are both happy to hang out “on the hard” and enjoy some time at our “land home” here near the beautiful CT River.

As I was catching up on all of the snail mail that had piled up while we were afloat, and let me tell you that a LOT accumulated in the nearly 5 months we were away, I spied a reference to the winner of this year’s Lora Piana Caribbean Superyacht Regatta held in March.  The winner was P2, a boat that we had raced against two years ago in Newport.  When I say “we” I am referring to our time aboard the 182′ ketch that we were invited to sail aboard in that race that was held in Newport.

When we were aboard Marie, she was the LARGEST yacht in Newport Harbor and let me tell you, there are a LOT of REALLY BIG yachts in Newport.   Marie has done well on the superyacht racing  scene but not quite as well as P2, a really high tech composite yacht that we raced against.  So, what is a superyacht owner to do when they loose a race to another?  You buy her, of course.

It it seems that P2, which we spied in Ft Lauderdale this winter, has been sold, to none other than Ed, the owner of Marie.   Here’s a recent shot of P2 that I snagged from Boat International magazine‘s description of P2.  The shot was taken in Ft Lauderdale near the Los Olas bridge.  This is a remarkable boat if you can call a 150’ yacht a boat. 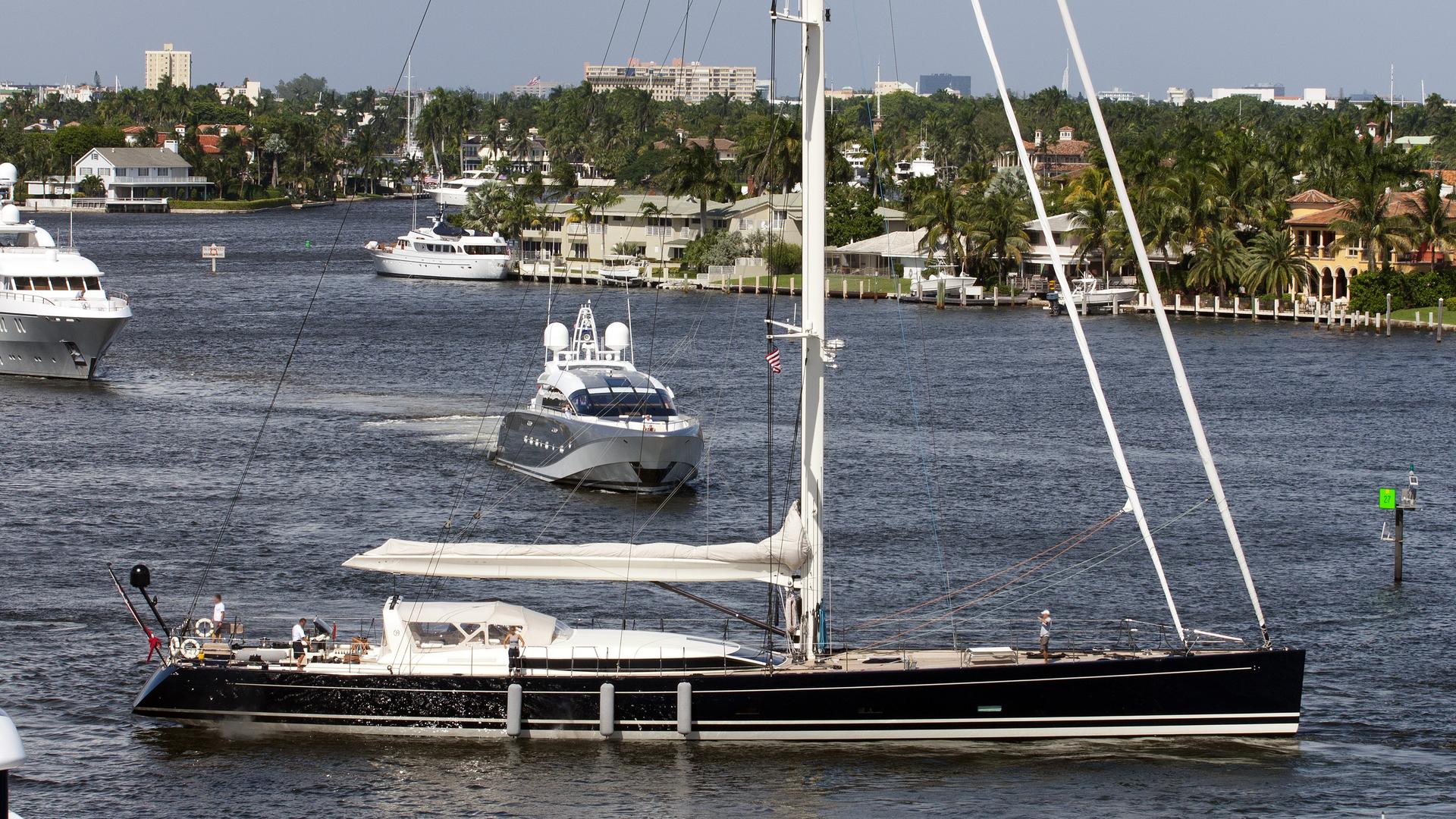 Hey wait, Pandora looks a bit like her.  Right? 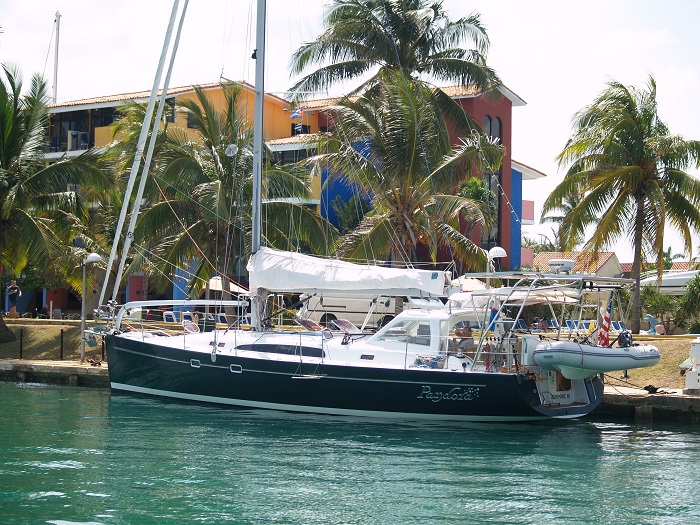 Well Pandora looks like at a minuscule 47′ version if you squint your eyes really, really tight.  Perhaps Pandora could be a tender to P2, a really little one.   Here’s an idea.  As Ed still owns Marie, his 180′ ketch, he can use her as a tender, or perhaps a better description would to call her a “hotel”, when Ed is out on P2, doing her stuff, tearing up the racing circuit.

Here’s a video of P2.  What an amazing boat!  Ed’s growing “collection” of yachts also includes an earlier build, his “smallest” superyacht, the mere 110′ Tenacious which you can charter alone or as part of a package including his private island in the Exuma Chain in the Bahamas, Over Yonder Cay.   Tenacious, compared to Marie and P2, is diminutive (HA!) at a mere 110′. However, like her big sister, she has a brace of cannon aboard and Ed isn’t bashful about using them when the mood strikes and it does often.

Here’s a video of Tenacious filmed along with  his island, Over Yonder Cay.  Check out the bright yellow seaplane, which I just love, that will whisk you there to begin your charter.  That wonderful yellow seaplane was there when Brenda and I visited Over Yonder this winter.  She’s quite a machine.   Here’s some highlights from our visit, including the main house which we toured on our last visit, a few years ago that occupies the highest point in the Exuma chain with remarkable views.

I just came across this new video of OYC.   And yes, OYC is really is as nice as the video suggests.
How about a video of Marie sailing shortly after her launch in the Netherlands a few years ago.  The audio is a mix of, I think Dutch, and some English. It’s a great tour of the boat too.  I’d say that she is still the “Queen” of Ed’s growing “fleet”.Alas, she’s just not quite as fast as the carbon fiber P2.  Here’s a video of the race we were “in” where P2 beat Marie.
Being the generous guy that he is, Ed will give you the opportunity to charter P2 and perhaps win a few races yourself.  Here’s the charter page for P2, so get on it!

I thought that this article from Boat International about Ed and his two “old” yachts, Marie and Tenacious was interesting.  Perhaps they will want to interview him again now that he owns P2 as well.

So, after coming to grips that there was a yacht with a better racing history than Marie, Ed what every racer wants to do, but usually can’t, he bought the boat that beat him.  Of course, if you can’t beat em, buy em.  And, if you want to know what it cost…   And, if you have to ask, well you can’t afford it.

But wait, there’s more.  If Ed loves sailing he’s also pretty happy to spend time around vintage airplanes and is a benefactor to a museum in Texas The Texas Flying Legends.  I found this article from a publication Warbird News that provides a good amount of information about the museum’s “fleet”.

I did a post a while back about The Texas Flying Legends and an airshow that they put on in St Barths.  In that post, I mentioned that Marie was kept at Over Yonder but was wrong.  It’s Tenacious that’s there.  It was a fun post so I won’t fix the mistake.  Call it “editorial license”.

Perhaps I’ll close, on this Labor Day Weekend, with a fitting tribute to the men that flew these amazing warbirds and sacrificed so much to allow us to have the freedom that we all enjoy today.