>I can’t believe it.  After the long cold winter Pandora is about ready to be launched in Annapolis.  Brenda and I took a long weekend in beginning Thursday evening to work on getting Pandora ready to go in the water on March 29th.

We spent the night aboard even though the boat was up on land in the Marina for three nights while we worked on the boat.  Fortunately, the ESPAR diesel heater that I installed last winter worked well and kept us warm each night.  With the nights still getting quite cool, we were happy to have the heater humming away.

The list of chores to focus on was daunting but we managed to get most of them done prior to heading back on Sunday afternoon.

I have been struggling with a vibration for the last two seasons in the drive train and exhausted about every option to solve the problem with the exception of having the propeller worked on.  The prop on Pandora is an elaborate feathering propeller designed to minimize drag when the boat is sailing.  Pulling it off of the boat is not a simple task and involves breaking it into it’s individual pieces prior to pulling it off of the shaft.

I sent it back to the distributor and was distressed to learn that it needed a major overhaul. The vibration that I had was because the gears in the feathering mechanism were worn and needed to be replaced.  Now that it’s back and I see how it operates now, I can see just how worn it was.  I am really pleased with how smooth the operation is now. 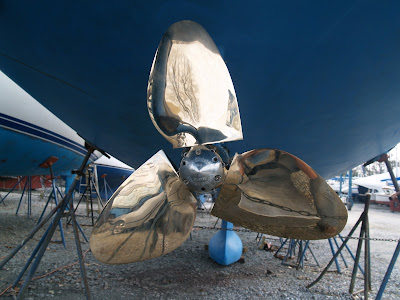 The prop is designed to engage the proper pitch, in forward or reverse and yet move into a more “slippery” feathered position when I am sailing.  The ability to feather eliminates a good deal of drag on the boat in sailing mode.  You can imagine how a prop of this size, 22″ in diameter would slow things down. 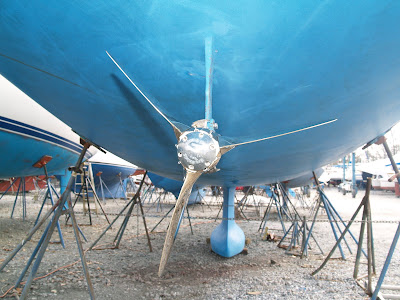 In this shot you can see how much different the profile is.  Yes, it’s much more hydrodynamic.
Now that it’s done I can only marvel at how shiny it looks.  To me it looks like gold and it should, given what it cost to repair. These pictures will only be a memory as it will tarnish right away when it hits the water.

Along with loads of big and little chores, I polished the entire hull which took hours but the results are wonderful.  You can’t tell that the boat was built in 1998.   With a shiny hull and new standing rigging plus a newly painted mast, the boat looks terrific. 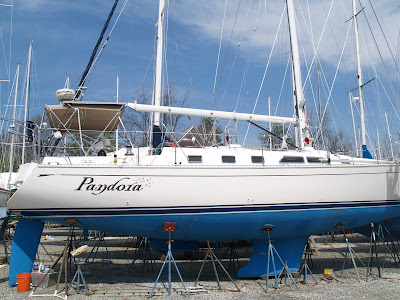 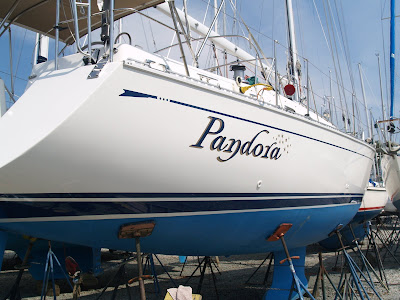 Not a speck of dirt on the hull.   Now, just a bit of touchup on the bottom paint and she will go in ready to travel.

The one bad part of the weekend is that my new holding tank leaks. Fortunately, I had the idea of putting some red dye into the tank and filled it with water.  All was well until several hours had passed and the bilge began to fill with red water.   My first thought was how much work I had put into getting that tank to fit and how difficult it would be to get it out and fixed.  My second thought was what it would have been like if we had used the tank for sewage and had it leak into the bilge. I prefer the red dye.  Well, I know what I will be doing next Saturday. Time to rip the cabin apart again. Yuck.  At least he bilge won’t stink.

They say that yachting is fixing boats in exotic places.  Well, the marina in Annapolis isn’t exotic but fix the boat I must.