It’s Wednesday morning here at Marina Hemingway and Brenda and I expect to leave for Florida on Thursday morning.  We were going to clear in in Ft Lauderdale but I learned today that the anchorages in Ft. Lauderdale that we have been using for years have now been cut off due to heavy lobbying by some local residents.  That’s very unfortunate as there aren’t any realistic alternatives there for cruisers unwilling or unable to pay high marina prices.  Anyway, there is a reasonably priced city mooring field in Miami that we’ll use as an alternative to Ft Lauderdale.

Today we’ll focus on getting Pandora ready for the run north and doing a bit of “hanging out” with some friends before we leave.  Tonight we will be getting together for drinks and dinner to say “adios”.  Several of them hope to make it to CT this summer to see us there.  That would be fun.

Yesterday morning I changed the oil in the engine, the second time since leaving Florida back in January and today perhaps I’ll also spend some time polishing the stainless.  And, let me tell you, there is a LOT of stainless on Pandora.   It’s not too hard to get it shiny again but the sheer volume keeps me busy for hours.  And, to keep her looking her best I have to polish everything about once a month.  However, I don’t seem to get to it that often so now she’s really in need of attention.  I spent several hours polishing the other day and only got the radar arch and stainless in the cockpit done.  There’s still plenty to do.  Of course, I’ll have to make time to visit the pool to cool off, perhaps more than one.

I had mentioned that there are some parts of the marina here that are better than others and I received a comment on that post looking for clarification.  The marina is a series of “canals” that parallel each other with concrete bulkheads on either side to tie up to in a “parallel parking” sort of way.  There are four canals with #1 being very close to the the ocean.  There is a hotel between canals #2 and #3 and that area also has some places to eat.  That’s the best part of the marina, with the nicest boats.  Yes, being close to the pool is noisy but it’s definitely the best part of the marina and also has access to WIFI, such as it is.    However, we have been having trouble with the electrical service which has very high voltage of nearly 140v AC.  That’s too high for the tolerances on my system so we have had to go without AC.  As it’s not been too hot it’s not been much of a problem.  However, that limits our ability to cut out the music from the pool and hotel that keeps pounding pretty loud until 10:00 each night.   However, being able to leave Pandora and jump easily into the pool has been fun and worth the noise.

Anyway, we also have to be sure that we have enough CUC to pay our bill.  We did get some more money exchanged yesterday but may not have quite enough and may have to find a way to change a bit more. We had expected to head back to downtown Havana today but as we now plan to leave Thursday, instead of Friday, we have decided to hang around here for the day.  We may be able to change a bit at the hotel or perhaps approach another cruiser who’s not yet planning to leave and do it that way.

One thing for sure, I don’t want to leave Cuba with any extra CUC as there is no way to change it to U.S. once we leave here.

Yesterday we headed downtown to Havana again and did some last minute touring of the city. It was fun and we still enjoyed the sights.

I have mentioned the large amount of construction/building repairs that’s going on and everywhere you turn there is evidence of investment going on.  Rumor has it that the Chinese are behind some of this and that doesn’t surprise me, if that’s the case.

You can see the stunning “after” along with some nearby “before”. 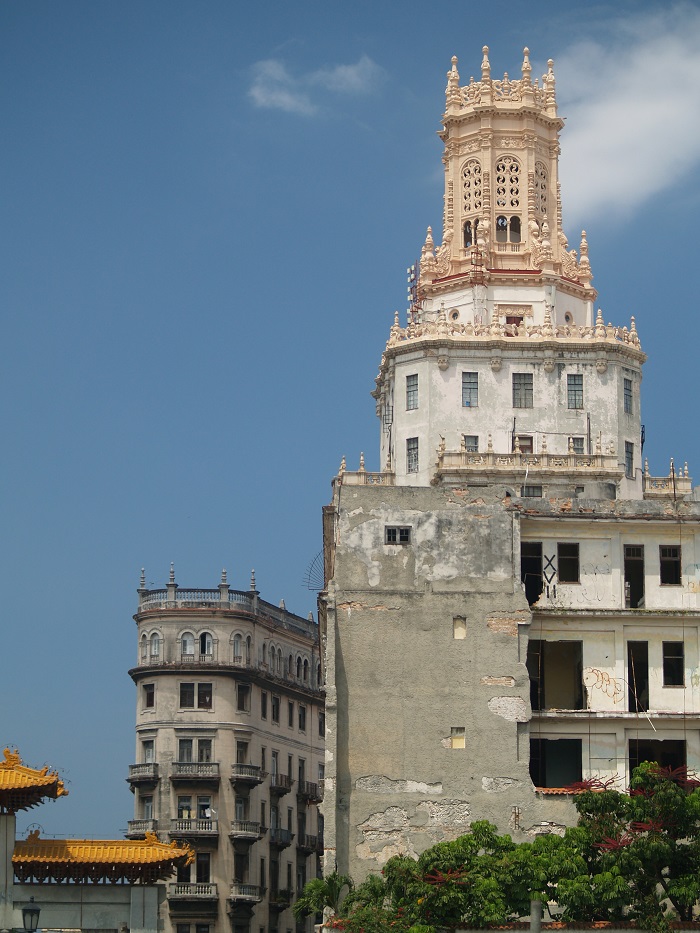 And, speaking of “before”, it’s doesn’t seem that long ago when the Soviet Union was such a big deal in Cuba.  This was their embassy, or at least the most visible part of the huge compound. 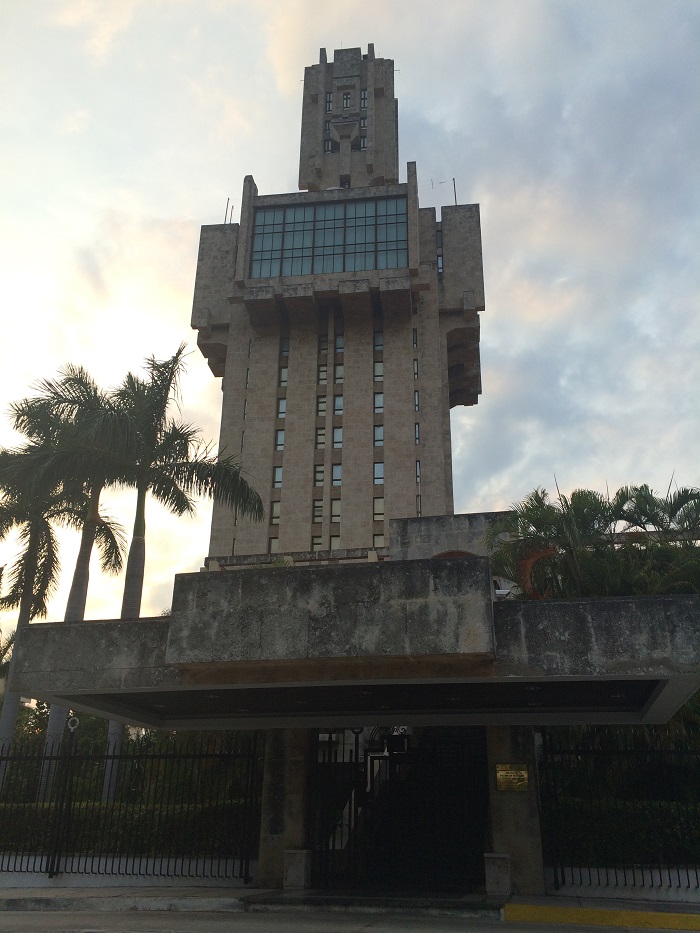 Of course, what’s a post about Cuba without a few more cars.  This is a really lovely convertible. 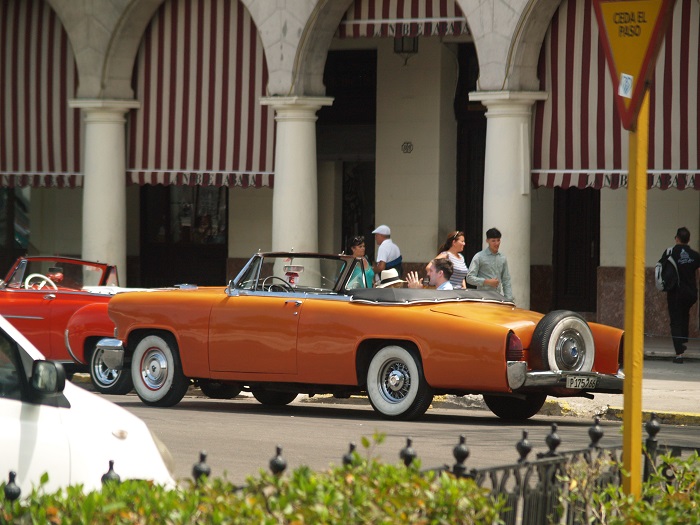 There are plenty of these funny little taxis.  I don’t think that I’d like to be on a busy roadway in one of these.  The “pilot” wears a helmet but not the passengers.  I wonder if they know something that their customers don’t know?  You think?  Not the safest vehicles on the road. 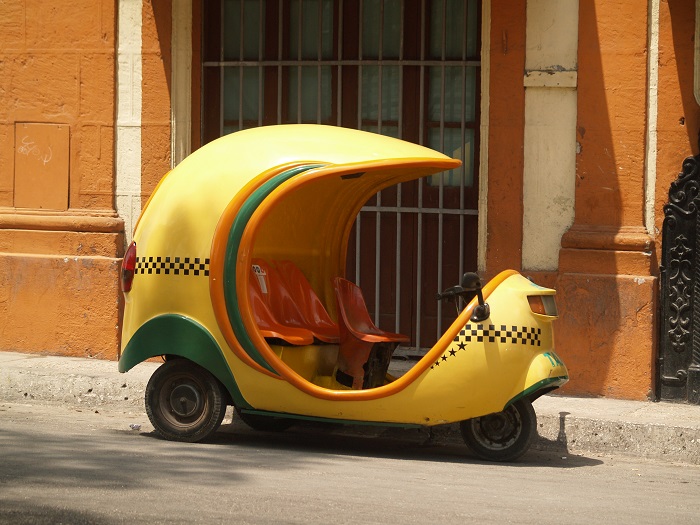 It was fun to see these women dressed in traditional holiday garb.  They pose for tourists in the most popular places.  It looks like they were taking a rest and talking to a window washer.  Or was he a mountain climber? 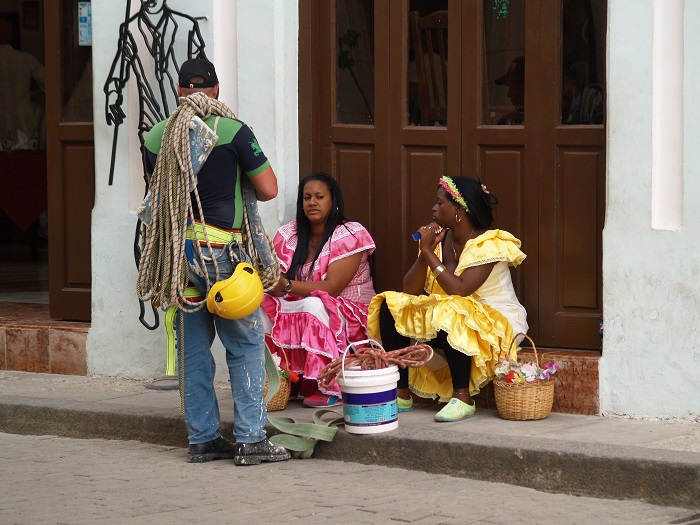 We have enjoyed visiting various bars in Havana.  Here are a few “shots”, pun intended.  No, we haven’t had drinks in ALL of them. 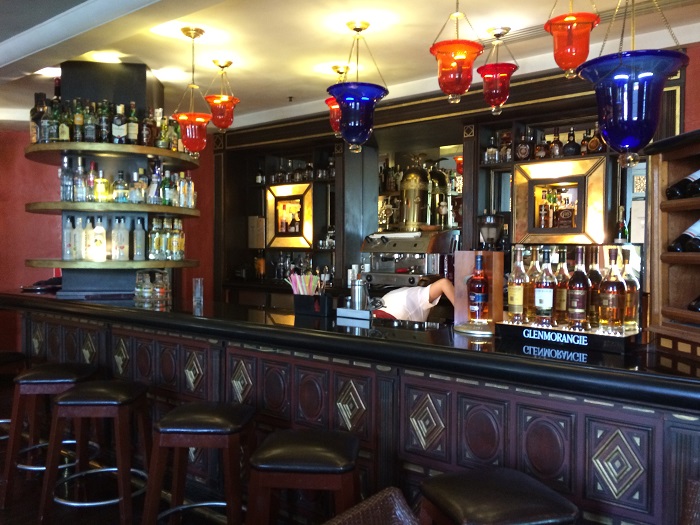 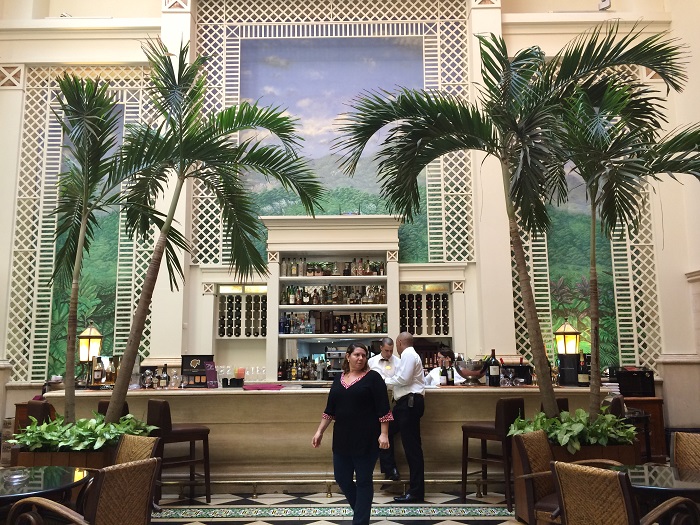 Can you say “dos Mojitos”?One cannot live on rum alone so we visited a pastry shop.  It was jammed.  Bread here is about $.40CUC per loaf.  Very cheap.  The sweets look better than they taste but are pretty good, never the less. 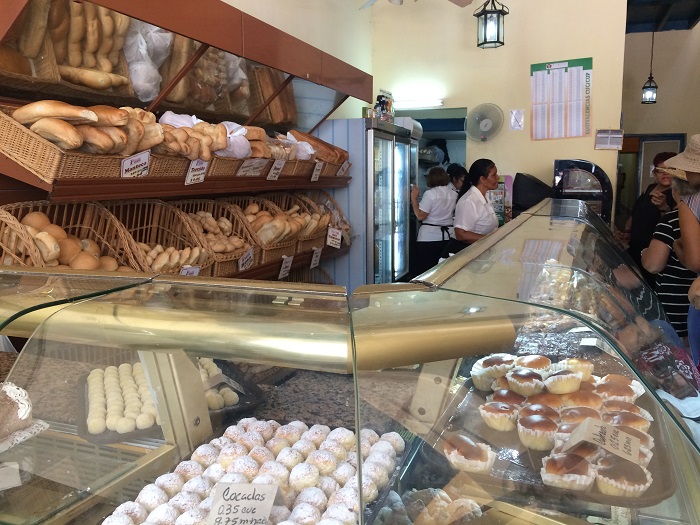 Brenda enjoyed buying some perfume in this place.  The shop was in an old building with some lovely stained glass and an impressive courtyard. 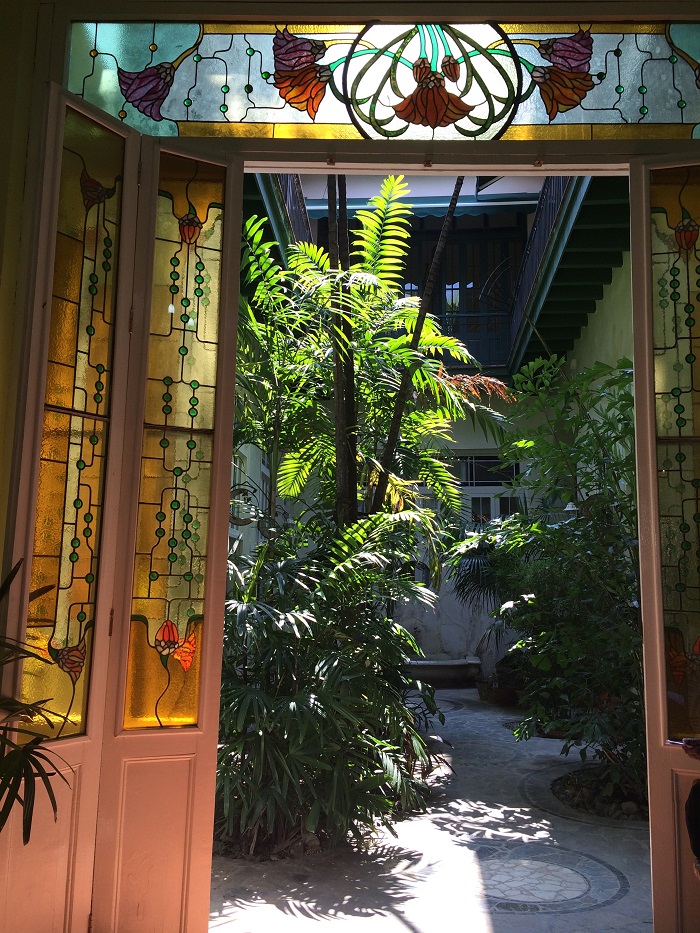 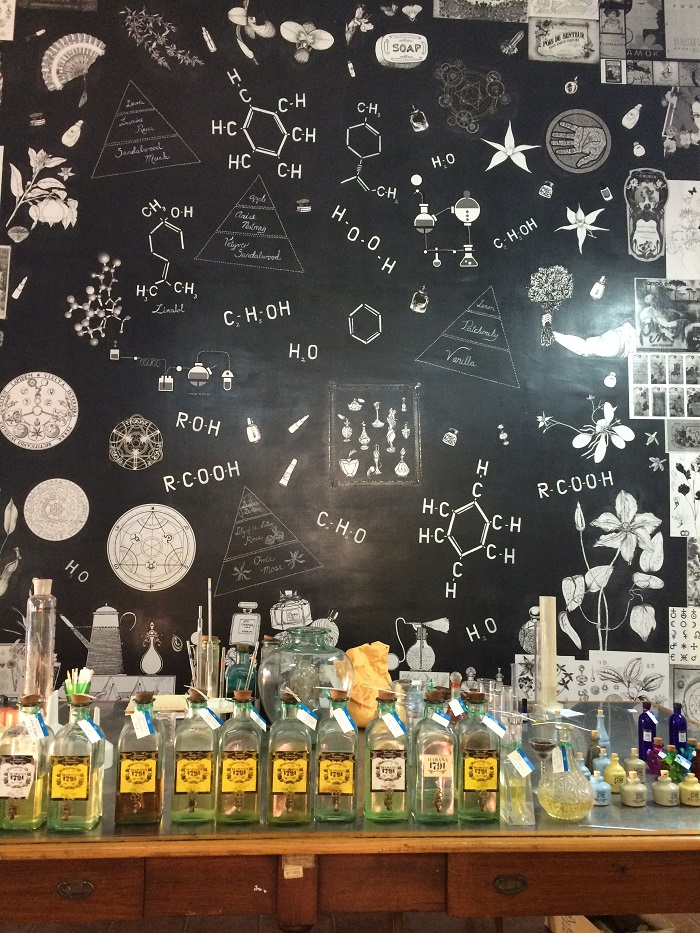 We also happened on a funny little gun museum.  It was a single room and featured mostly shotguns from around the world.  A very eclectic mix.  They also had a rifle purportedly owned by Che, the revolutionary and one of Castro’s buds.  There are more photos of him around than of Fidel. 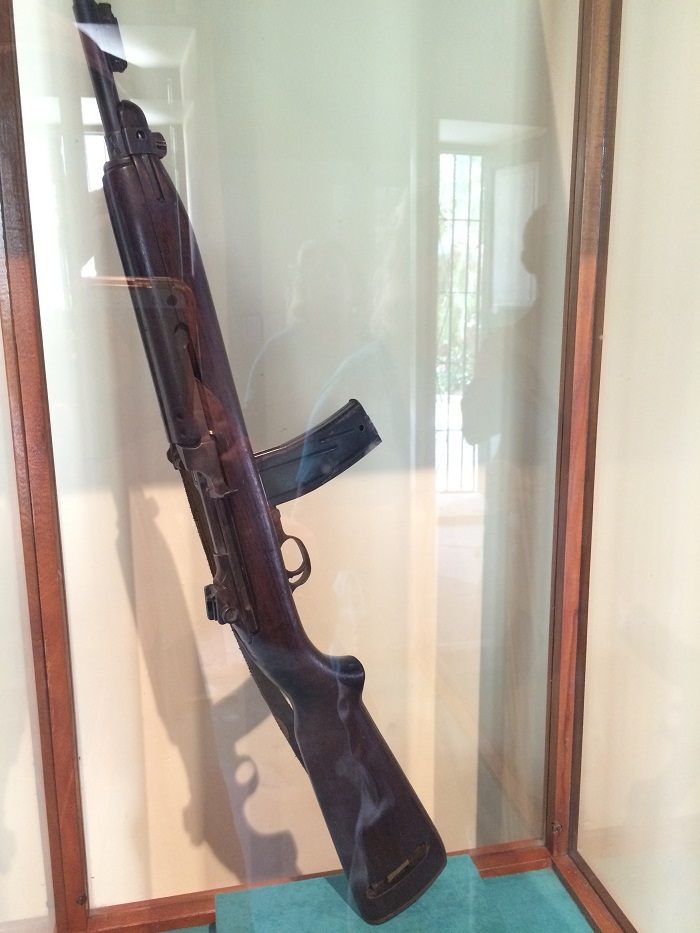 We never tired of the views down old streets. 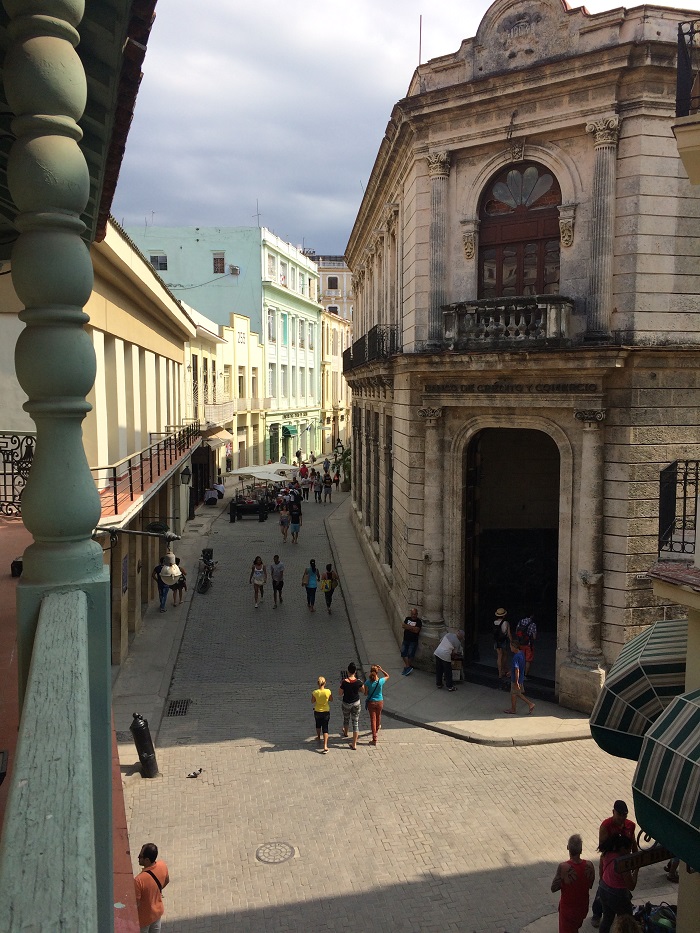 Along the way we spied a local “artist” making things out of palm fronds.  We were very impressed with his work.  We have seen plenty of baskets in the Bahamas made from Palm fronds but nothing like this. Amazing work. 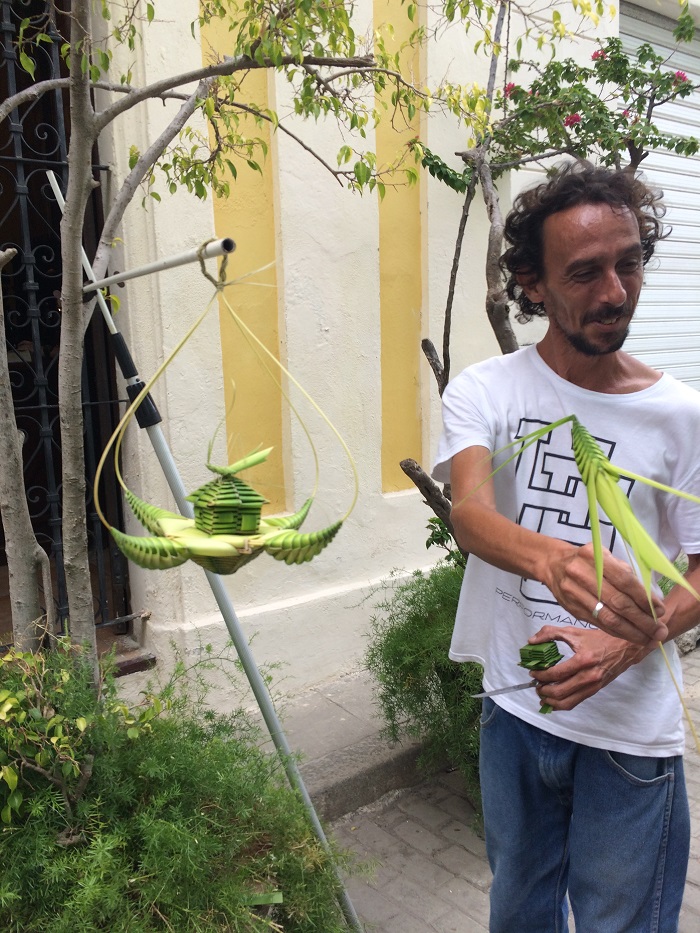 It’s remarkable what he was able to do with just a few fronds.  This was his “display”.  Amazing. 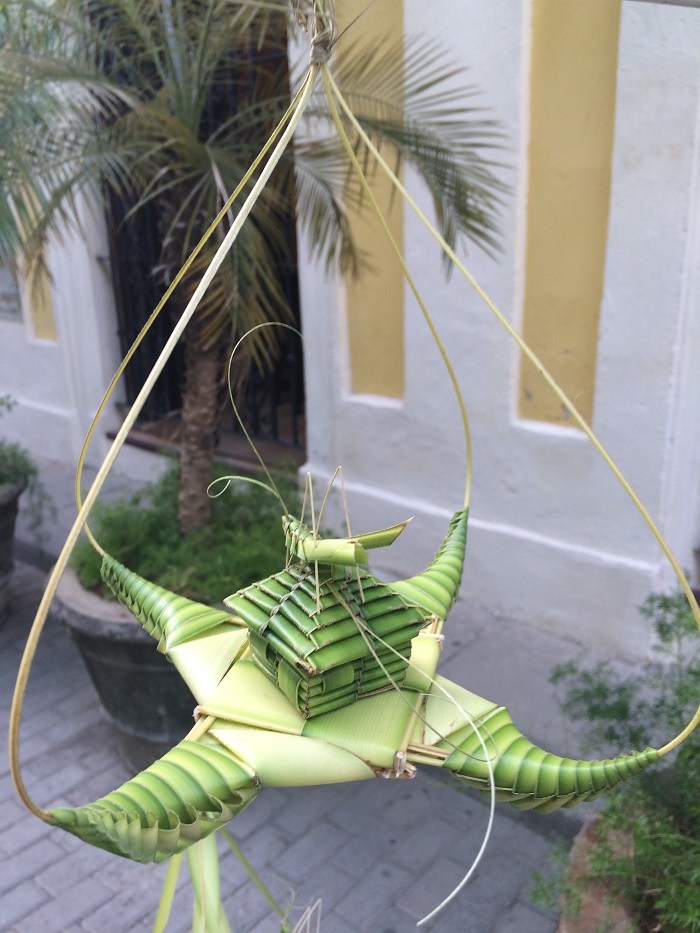 We loved it so much we got another after we had eaten dinner, just so we could watch him make it. 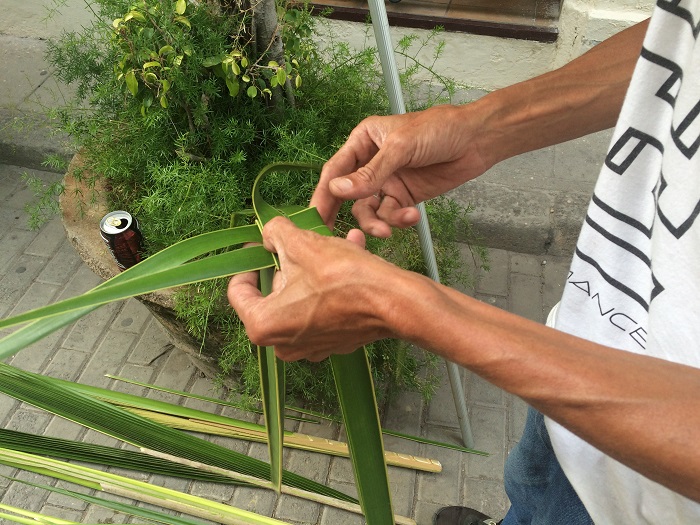 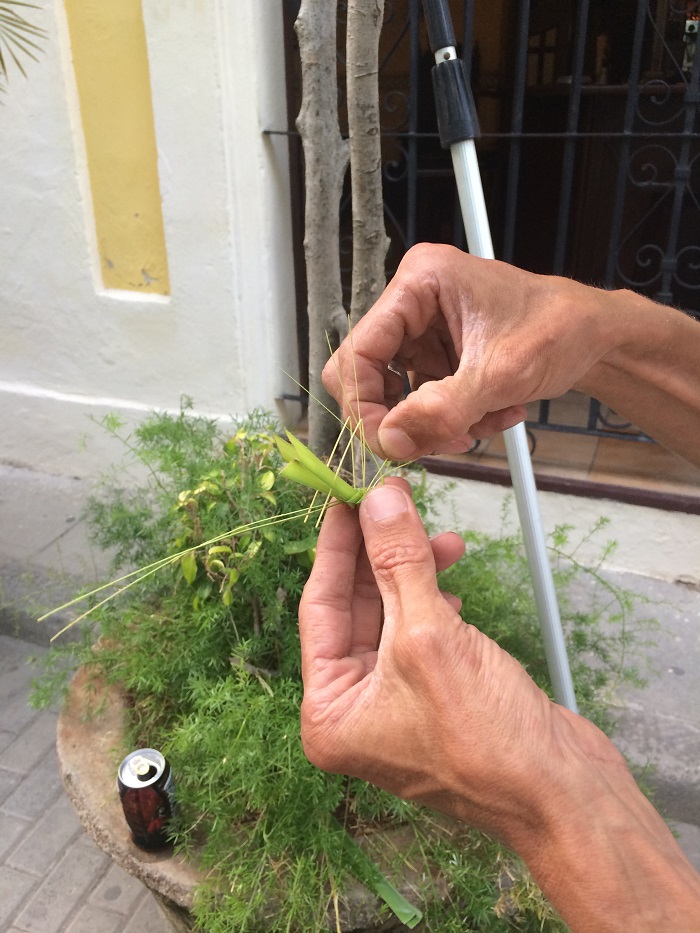 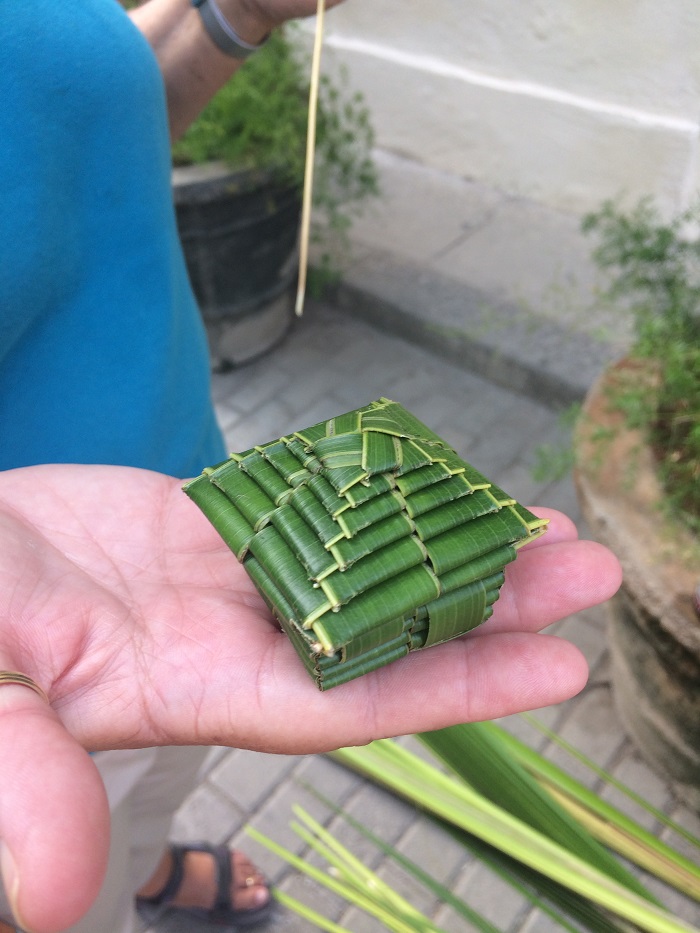 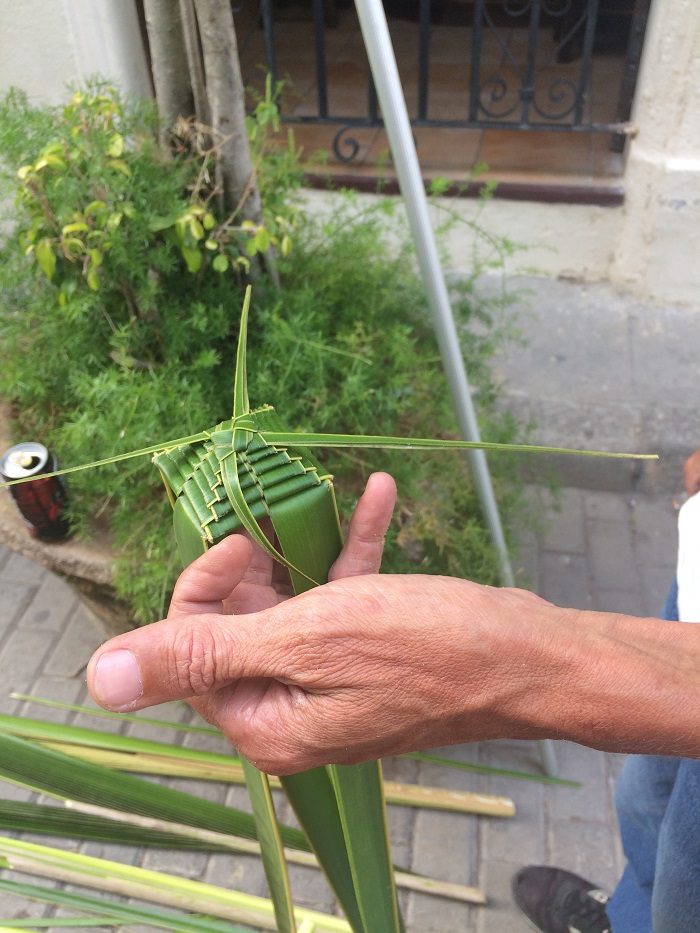 Then he made  a grasshopper. 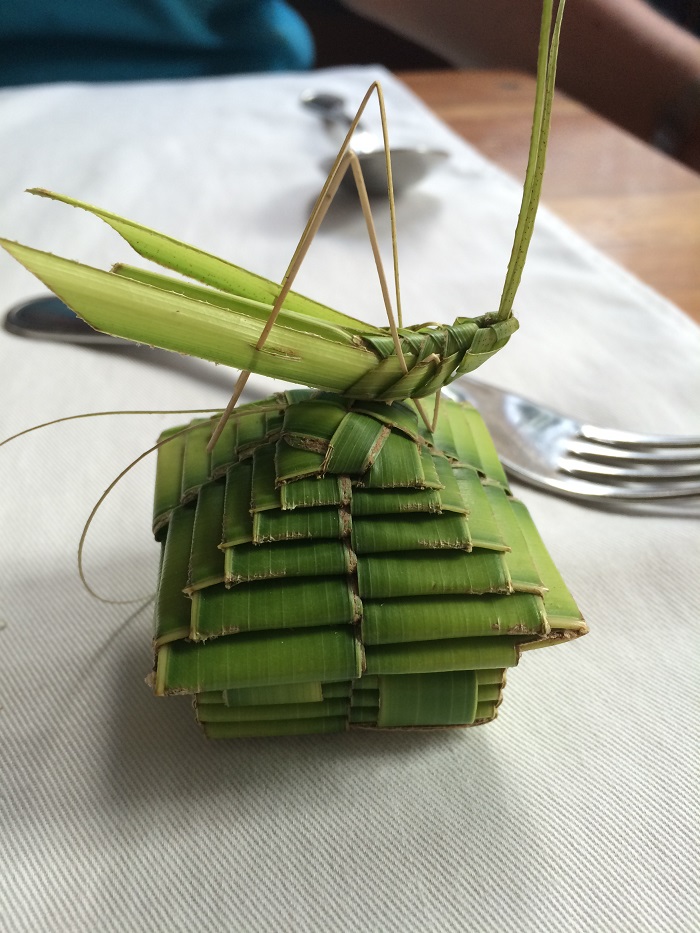 Dinner was not as memorable as the location.  It was in an old printing factory or at least decorated to look the part. 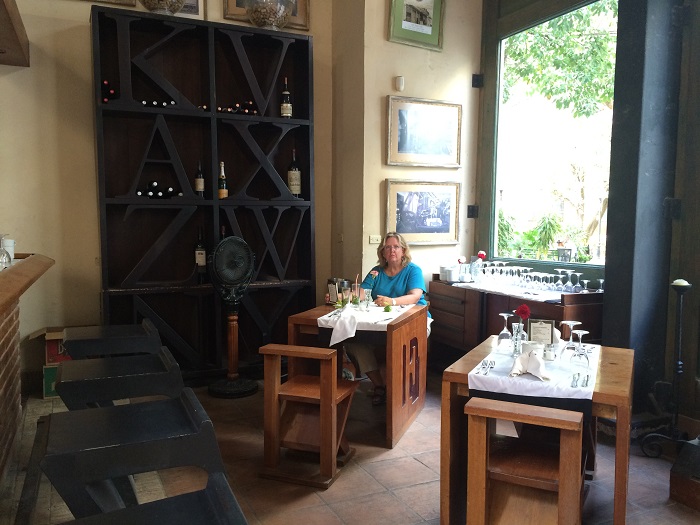 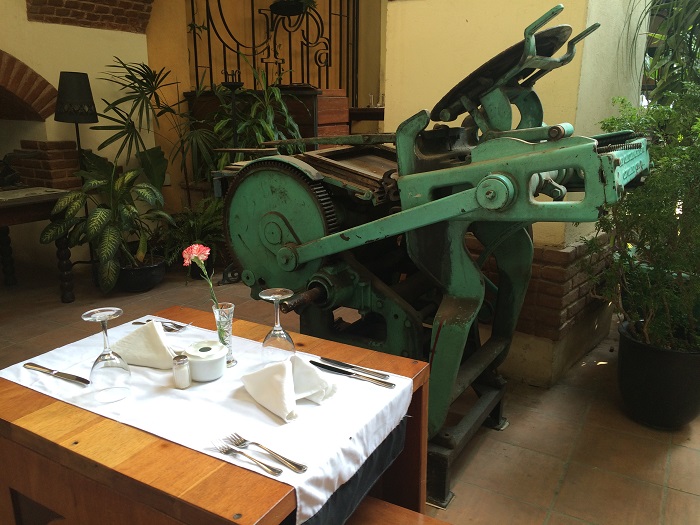 All and all, a wonderful few days in Havana but we are ready to “get out of Dodge” and back to the good old U.S. of A.

So, one more night in Havana and we are Out’a here!

Flash alert:  I found out that “the place” to change money here in Havana happens to be in the beauty parlor at the marina.   The exchange rate is actually better than at the “official” places.  And the “exchange lady” was a lot better looking. And, I also got my hair cut.  Such is life in Cuba.  A remarkable place.  A remarkable place indeed.

Next post?  If it’s from Cuba, instead of Florida, there will surely be a good story to tell.  Let’s hope not…