The people of Cuba, uncommonly nice.

Mundra We anchored off of a small resort island, Cayo Levisa, our last stop before we head the 60 miles to Marina Hemmingway and Havana prior to heading back to the U.S..  This lovely little island offers great protection from the coming cold front that should hit us tonight bring with it strong northerly winds for the next few days.   There aren’t too many spots along the northwest coast of Cuba that provide good protection from such winds and being safe and comfortable is key for us as we prepare for the weather.

Rydułtowy Our first night here Brenda made a wonderful pasta dish of bacon, tomatoes and fresh bok choi.  I mention this, not because it was a particularly unique dish as Brenda’s a great cook and we east very well aboard Pandora, but because it’s been 15 days since we have been anywhere to get fresh produce and our stores are pretty low.  I should note, we still aren’t anywhere near a produce stand so that begs the question of exactly where we were able to get fresh bok choi.    Hold that thought for the moment.

I have been struggling for the last few weeks of exactly how to describe the wonderful interactions we have had with the people, especially in the rural areas, here in Cuba and perhaps our “bok choi experience” is a good example.

As we move from place to place in Cuba, our travels are strictly monitored by the Guarda Frontera, a military/police force that check us in and out again from most of the places that we visit with the exception of the most rural cayos.   When we arrived here at Cayo Levisa, I headed ashore with our papers, passports, list of Pandora’s particulars, our USCG documentation and “despacho” or cruising permit to check in.

I was met at the dock by someone from the resort who informed me that I had to return to Pandora and wait there for two hours until the Guarda Frontera officer arrived from the mainland on the 18:00 ferry to check us in.

At the appointed hour the officer arrived on what appeared to be a dive boat from the resort which circled Pandora as it arrived, officer waving, and continued to the dock.  I jumped in my dink and headed to shore.  As is nearly always the case, I was greeted warmly by just about everyone on the dock including the Frontera officer, dressed in his uniform.  Black shoes, slacks and white dress shirt, complete with “official” looking epaulets on each shoulder.

The captain of the dive boat also introduced himself with a hearty handshake and presented me with a perfectly ripe, enormous papaya.  Now, I can’t say that I am a huge fan of papaya but I was very touched by the gesture.  So, back to Pandora I went with the officer and my papaya to complete our paperwork.  Sometimes the officers make a brief inspection of Pandora but in this case he didn’t and just filled out his paperwork.  They almost always ask questions about us and the boat that go beyond the information that they need for their forms so it’s clear that they are just curious about the boat, us and our travels.  It’s pretty clear that they don’t see many cruisers, especially from the U.S.  and are always interested in learning more about us.  Brenda and I always enjoy these friendly exchanges.

Questions answered, we said our goodbyes and I took him back to the dock.  I was still thinking about the gift of the papaya and had decided to give the captain a bar of soap as a thank you.   The captain accepted my gift with a hearty “gracias” and motioned for me to wait a moment.  He retreated to his cabin and emerged with a bundle of fresh greens, bok choi, leafy lettuce and some green beans, delivered with a big smile.  Now it was my turn and he gently let me know that if I had a tube of silicone or perhaps a spare screwdriver aboard he’d be very pleased as it was tough for him to get such things in Cuba. 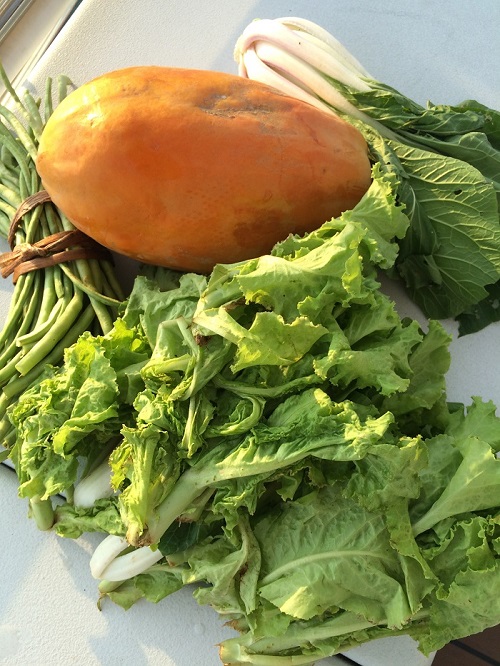 Now, the more jaded among you might say that the whole exercise was designed to soften me up so I’d give him something, and clearly it was.  However, the process was done with such care and grace that I found it to be quite charming and a good example of our many exchanges where Pandora’s crew received something and so did they.

I told him, as best I could that I’d see what I could do and would see him “manyana”.  We parted with smiles.   The next day I presented him with a “Vicegrip” wrench that I had that was a duplicate in my tool box.  He seemed to be very pleased.

There are so many basics that we take for granted in the U.S. that Cubans just don’t have access to.  As a result, they are always looking for items to check off of their “wish list”.   Razors and lengths of line for boats are always very popular.  I wish that I had known as I have hundreds of feet of extra line at home that I’d be happy to give away.  Perhaps next time.

Another wonderful exchange occurred a few days ago when we were approached in a very remote anchorage by two fisherman that wanted to sell us some lobster.   They approached us in a small rough rowboat and showed us their catch.   They had come over to us from a “fishing station” a sort of “home base” on the water, a number of shacks and docks built on pilings out in the water where they managed their catch and lived between trips to the reef to fish.

Anyway, we bought their lobster for a few CUCs each. 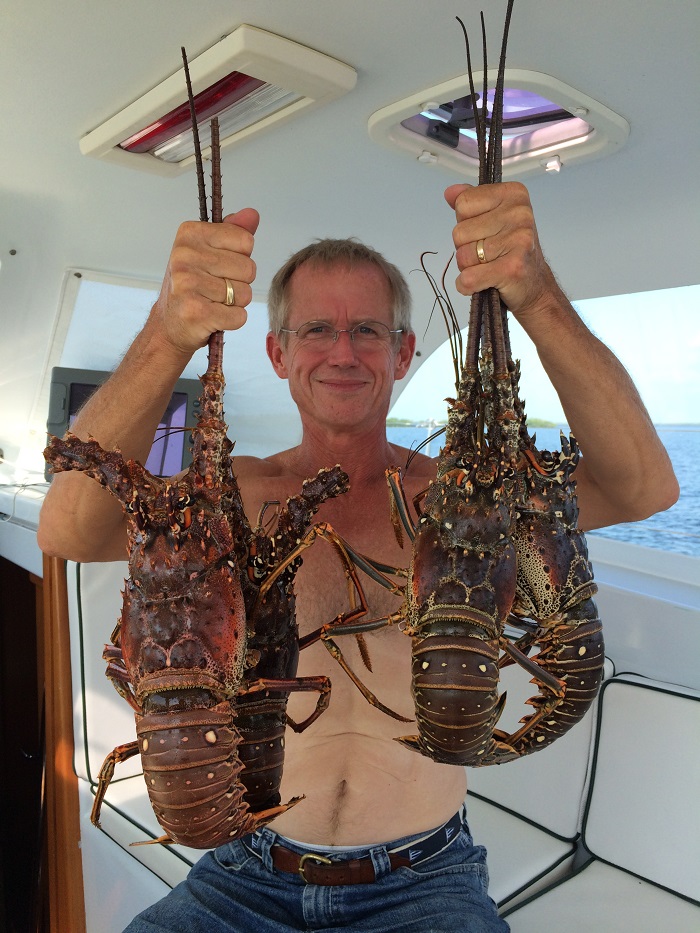 After our deal was done one of the fisherman took off his cap and retrieved a single playing card, the queen of hearts.  After a bit of back and forth, it became clear that he was asking if we had any playing cards.  I didn’t know if he wanted to play cards with us or if he wanted cards but I “played” along anyway.

One thing led to another, I went below and returned with a deck of cards.  His reaction was amazing.  He and his partner both clapped their hands and let out a “whoop”.   What a great reaction and a good example of our many exchanges over the last two months here in Cuba.  In the U.S. it is so easy for us to get just about everything we need but here in Cuba they are on a constant quest for even the simplest items.  This experience was another example of the very friendly “culture” we have encountered, especially here in rural Cuba where the simplest gesture or “gift” is so appreciated.  I expect that this will be lost in the coming years as Cuba reengages with the U.S. and consumer goods are more readily available to them.

Don’t get me wrong, it is unfortunate that the fisherman had to work so hard to get something as simple as a deck of cards, but it was his approach and the gentle manner that struck me as so “Cuban”.  And I, for one, was pleased to be so appreciated by such a simple gesture of the gift of a deck of playing cards.   (Brenda wrote about this encounter too, but with her own take, and you might want to check it out at www.argoknot.com)

While I am on the subject of fisherman, how about this “boat”,  more of a raft made of a framework of boards on top of what appeared to be truck tire tubes stretched out with the cut ends tied with rope.  I can’t believe that they row miles offshore in these fragile craft. 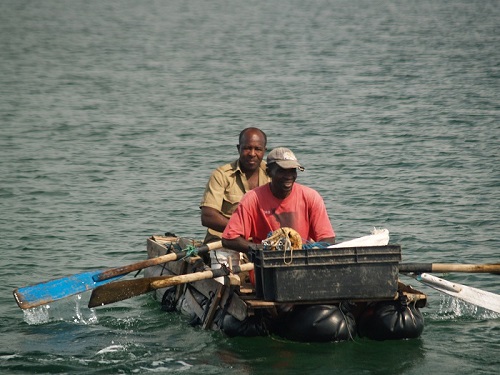 We bought some lobster from them too (our freezer is jammed now) and as they headed away they hoisted a rough sail to help them on their way toward the mainland, still miles away.   What a sight. 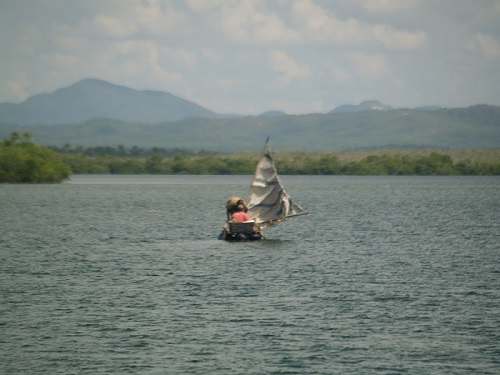 As we made our way up the northwestern coast of Cuba over the last week we have visited some beautiful cayos with just spectacular scenery.   This shot of Pandora with the mountains in the background was particularly lovely. 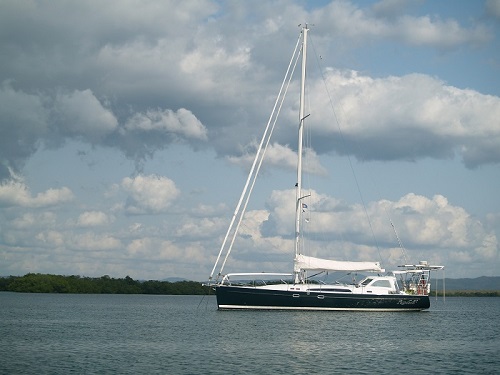 We anchored in the lee of some remarkable mangrove stands, some of which had trunks that were 18” in diameter and perhaps 60-75’ tall.  I have never seen mangroves of that size and have to wonder just how old they must be. 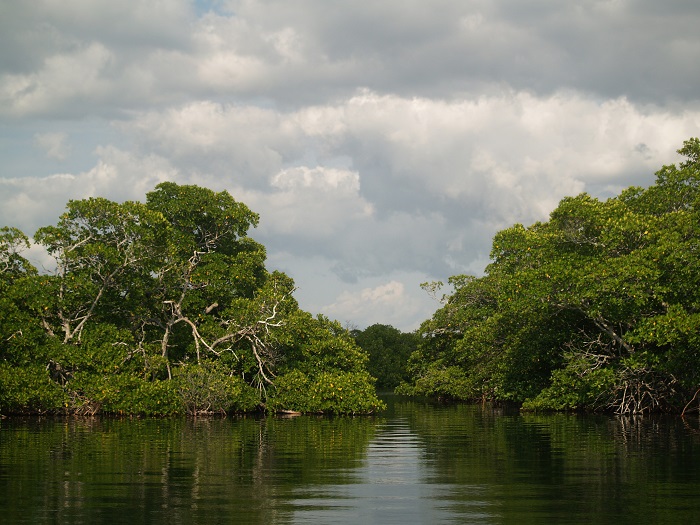 In one of the spots we anchored for the night, we shared the cove with a group of fisherman on a ferocement boat.    The boat was very rough construction of iron bars with a cement coating.   I expect that they don’t last very long but this type of boat is very popular here in Cuba. 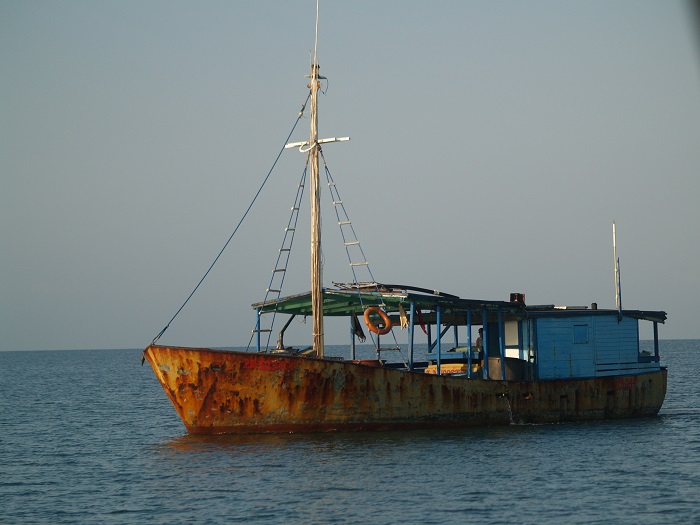 They waved to me, I visited and was invited aboard.  The captain was very nice but his English was no better than my Spanish. 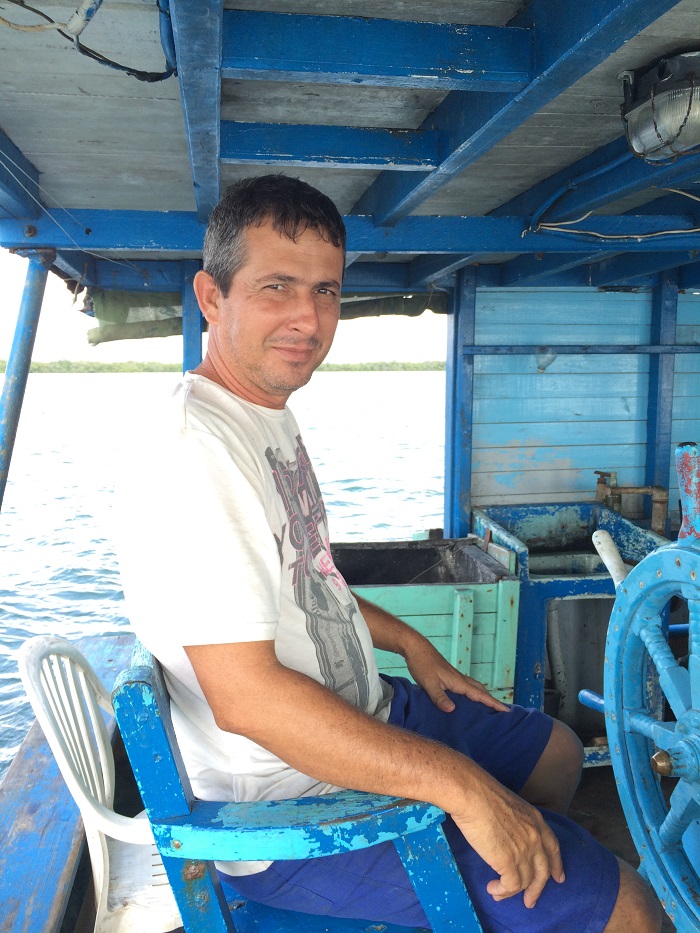 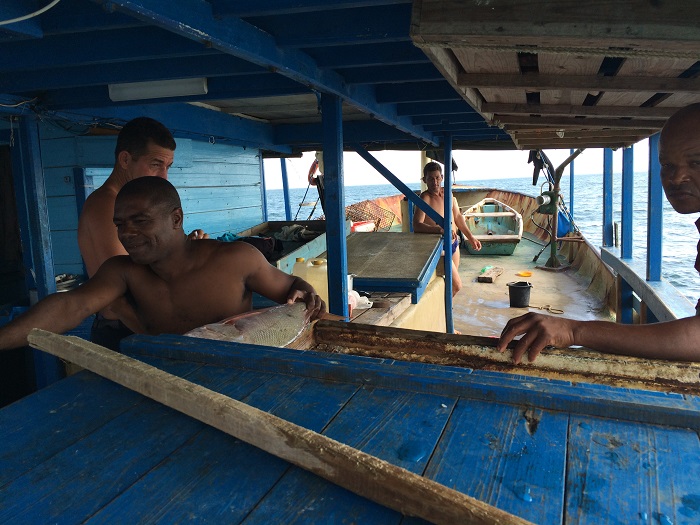 One of the crew was happy to show me some of their catch. 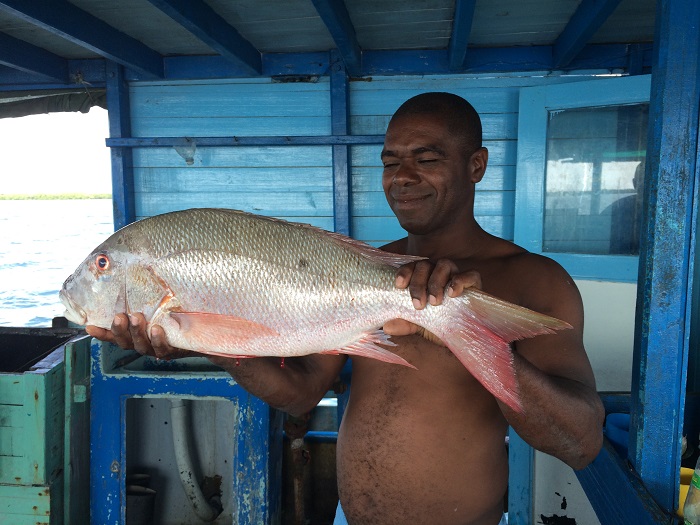 The next morning Brenda and I watched as each crew member donned a wetsuit and jumped in the water.  After a while we realized that they were picking up sea cucumbers from the bottom of the bay and filling their “baskets”. 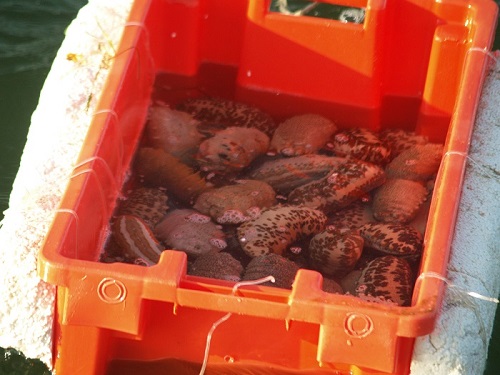 I haven’t seen this on any menus here in Cuba so perhaps they export their catch.  I know that sea cucumbers are very popular in Japan.It seems that like so much of life in Cuba, these fisherman are very opportunistic and catch whatever they can.  Fish one day, lobster the next and then on to sea cucumbers.  Their fishing techniques are so low tech that they are easy on the environment as they don’t have access to the sorts of equipment that is the mark of “industrial fishing” elsewhere.   I expect that a more “open” Cuba will lead to overfishing.

Earlier this morning I spoke with Chris Parker about the coming cold front and learned that there isn’t likely to be another “window” to make the 60 mile run to Havana for perhaps a week.  That’s a long time but fortunately, this is a lovely spot and the holding is good so, wind or not, we will certainly enjoy spending time here until we can continue our run east to Havana.

The island is a resort with perhaps 50 bungalows and a nice restaurant along with a great beach so being “weathered in” won’t be so bad.  It will certainly be better than being stuck in a mangrove swamp with 500,000 of my closest “no-see-um” friends, that’s for sure.

After we visit Havana and head home to the U.S., it will be good to be back in “civilization” but we will look back fondly to the wonderful people we have met in our nearly two months of cruising Cuba.    I have never encountered a group of people who are harder working or approach life with more grace and it has been an inspiration to experience, first hand, their pluck and determination.

Cuba will certainly change in the coming years and I encourage you to visit here soon to see for yourself this very unique place and culture of uncommonly nice people.

One response to “The people of Cuba, uncommonly nice.”