The “other” Largo, Cayo Largo, Cuba

Of course, every cruiser has heard of Key Largo, in FL but how many American cruisers have visited the “other” Largo, Cayo Largo, on the southern coast of Cuba?  Well, that’s where we are and it’s a remarkable place indeed.

I have to say that it is a treat to be here as we don’t usually tie up at marinas and it’s the nicest of the marinas that Brenda and I have seen during the month we have spent in Cuba.  Cayo Largo is an interesting island, some distance from mainland Cuba as is totally devoted to tourists.   The only Cubans that are here work in the hotels and marina and all of them only live here while they are “on duty” for their 21 day (I think) cycle.  While they are here they live in housing provided for them on the island.  After their “tour” is over, they move home to the mainland for a week and then begin the process all over again.

There are many buildings that make up the marina complex but clearly the bar is the center of activity.  It’s a nice spot. 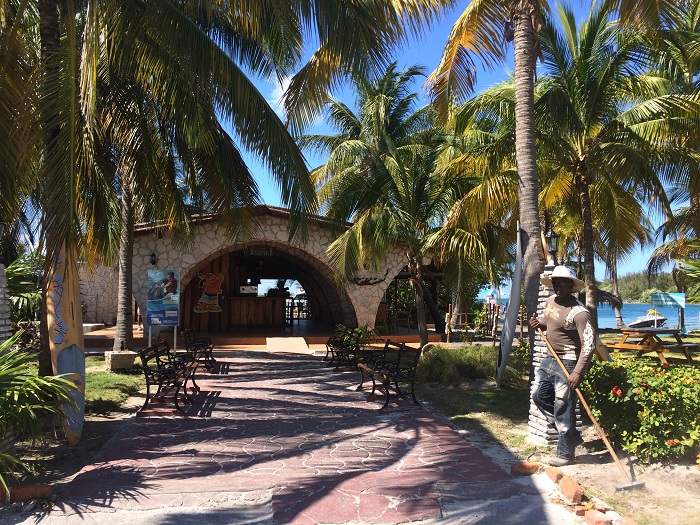 And, there is a great view of Pandora right out in front. 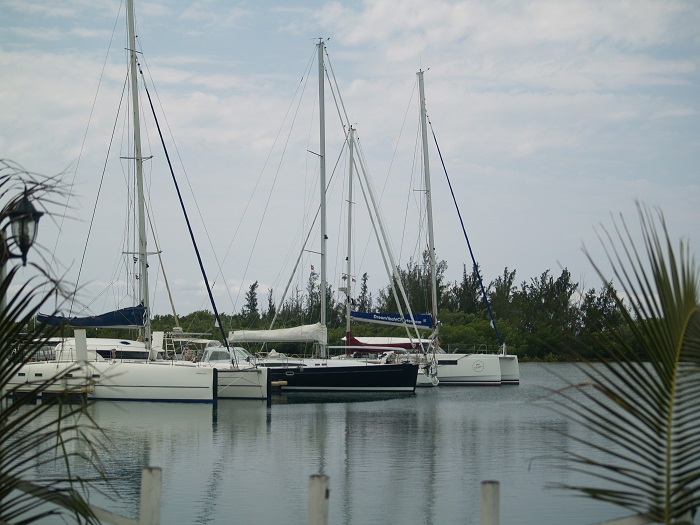 Interestingly, a cerveza (beer) is $1CUC if you buy a single can or a case in a grocery and the price doesn’t change if you purchase a full case.  And a beer in the bar is also $1CUC, the same price as in the grocery.  Go figure.  To that point, we have found that most consumer goods seem to be sold at set prices regardless of where you purchase them.   For diesel, it’s always a pretty high $1 CUC/liter as the price is set by the government.

It’s also interesting to see how prices compare to the U.S. as some things are much more expensive here than in the U.S. and other things are less.  Beer in a bar wins the prize as the low cost item.  The last time I paid the equivalent of $1 for beer in a bar was many, many years ago.

On another topic, a “cold” front came through the area the other night bringing with it, a temporary break in the humidity, a welcome change for us.  We have been in the marina for a few days now and to be able to run our AC, well at least one of our two zones, has been great.  Unfortunately, the electricity on the docks isn’t quite strong enough to handle both zones, but cooling the main salon during the day and our cabin at night has been a real treat.  Another benefit is that the prices at marinas here in Cuba are considerably less than in the U.S. at less than $40CUC per day and that includes electricity, such as it is.  One consideration though is that the water on the dock is brackish, at best, so you don’t want to put it in your tanks.  However, because the harbor is so clean, with about 20’ of visibility, even at the dock, we have been able to run our watermaker each day.  When was the last time you were in a marina with that kind of water clarity?

How about 5’ long tarpon swimming near the bar?  Not something that you see every day. 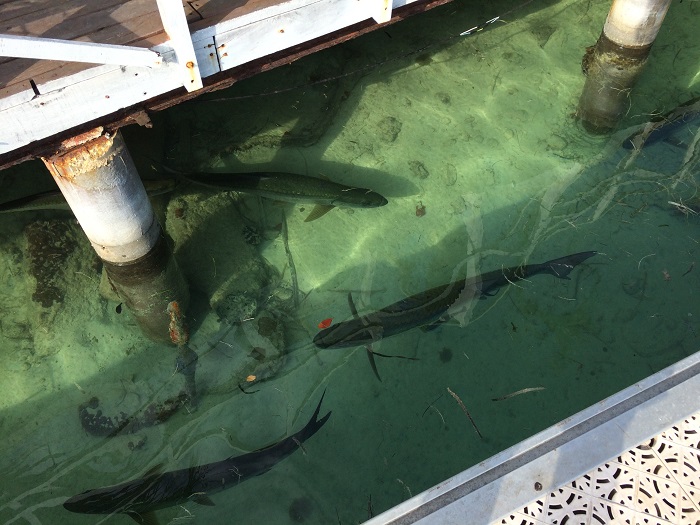 This area of Cuba is known for spectacular diving and I have to say that the amount of sea life, even close to the marina is remarkable, especially compared to The Bahamas, where we have spent a lot of time.

When you get about a mile from the marina the water is even more amazing and I was surprised to find literally dozens of conch, both mature adults and smaller juveniles nearly everywhere.    In the Bahamas, where they are heavily fished, you would never see such a sight.  These are the little ones, about 3-4” long.  Brenda and I were fortunate to find a few shells that had no occupants.   What a find.  Believe it or not, this shot was taken trough the water.   Gin clear. 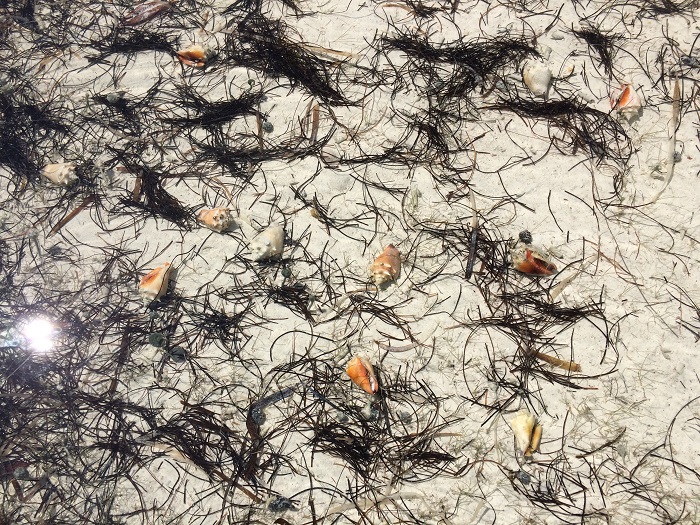 If you didn’t see the ripple on the water you’d never know that this starfish was even in the water.   This one measures a foot across. 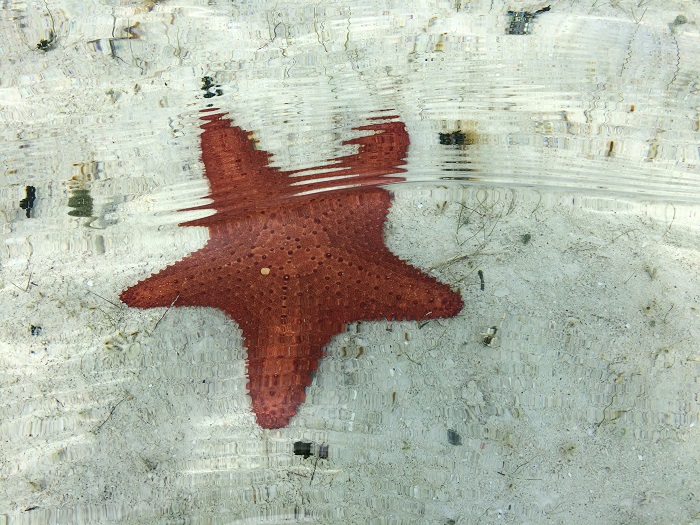 And, just above the surf line there is a very healthy population of iguanas.  This big guy was looking for a handout and was pretty intimidating at over 4’ long.  There are some like this in the Bahamas too but they only populate a very few islands.  Here in Cuba they are on many islands.   A few years ago one of the Bahamas colonies was wiped out in a hurricane and some “stock” from here was used to repopulate.   They are pretty fearsome looking creatures. 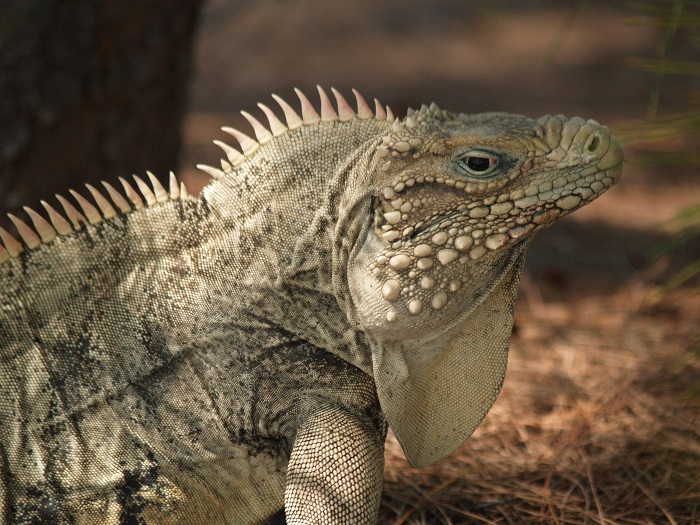 I expect that once Cuba is “discovered” by folks from the U.S., there will be much more pressure on the environment.  Yes, there are a lot of tourists from all over the world here but I expect that an “American Invasion” is going to have a big impact.

Make no mistake about it, there are plenty of tourists here now as witnessed by this beach scene on the other side of the island but somehow things are still pretty pristine. 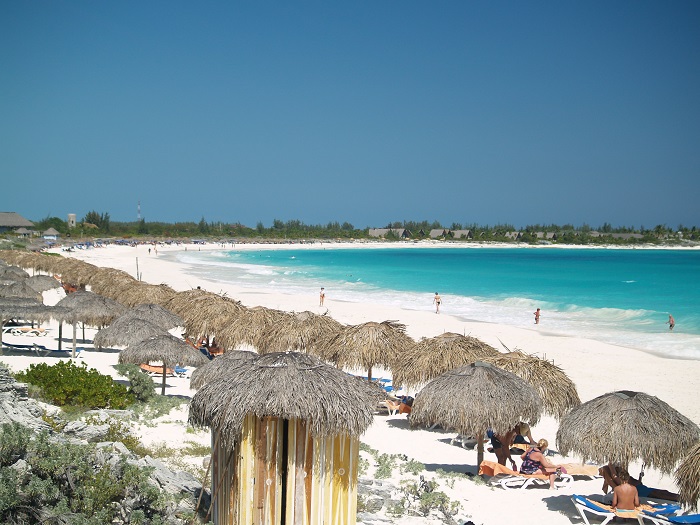 This huge catamaran makes the rounds between here and Cienfuegos as we have seen her several times including blasting by us on her way back toward Cienfuegos as we made our way here the other day.  Catamarans are clearly the popular choice verses monohulls here in Cuba and there is a busy charter community, both bareboat and crewed. 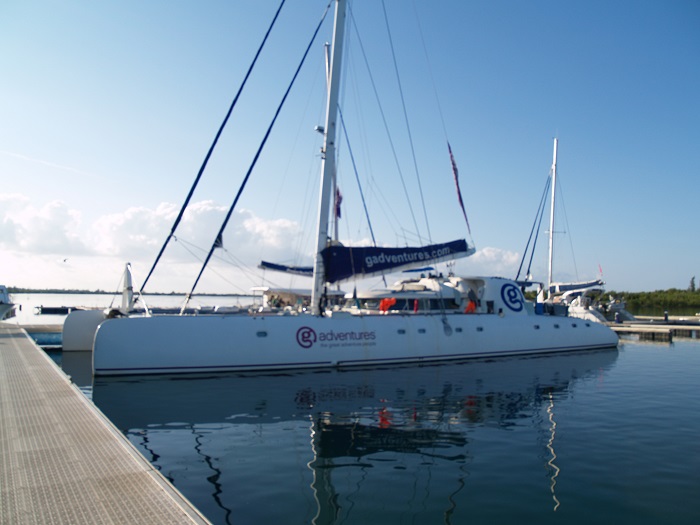 Every day dozens head out for snorkel trips here at the marina and to head to some of the nice reefs nearby.  The crowds aboard those boats are a bit different than what Brenda and I experience aboard Pandora where the mantra is “six for cocktails, four for dinner and two (that’s us) sleep on board”. 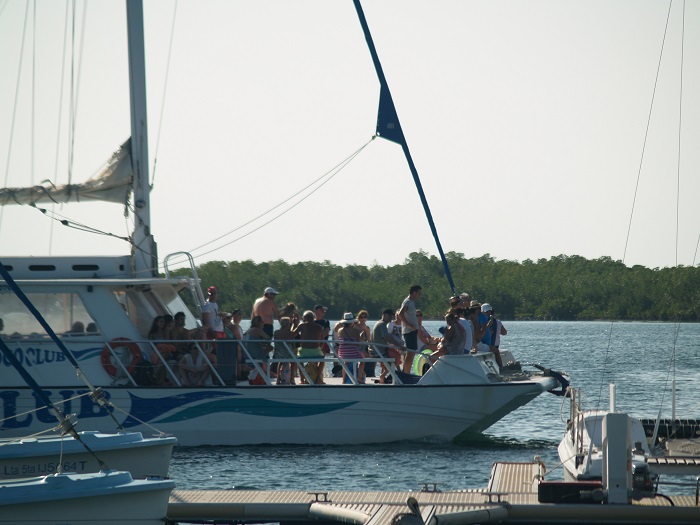 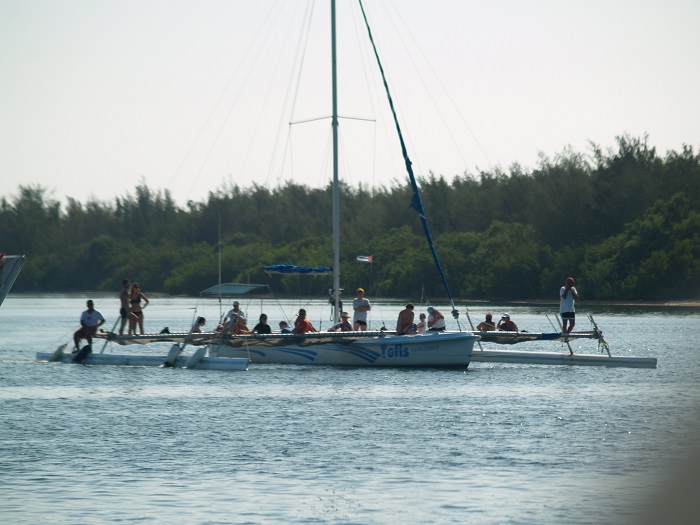 While there only a handful of boats here it’s a very international group including France, Luxembourg, England, New Zealand, Norway, Sweden and even Russia.  And then there was little old Pandora with us Yanks.  Here’s some highlights from just the last two days.

Our friend Lars and two of his buds from Norway relaxing on the bow of Luna. 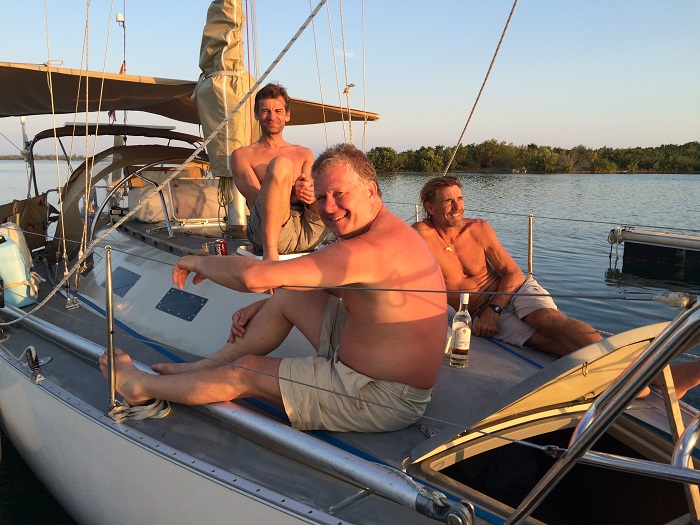 A group of guys chartering a boat here on holiday from Russia.  Did you know that there is a branch of the “Rotary” in Russia and one that’s focused on sailing?  It never occurred to me.  it’s the International Yachting Fellowship of Rotarians.  No kidding and Oleg Karpeev, is the president.  They posed with me and Brenda near Pandora.  One of them was even named Igor (the first real live Igor we have ever met) and their English was WAY better than our Russian.   Everyone had to get into the shot.  They were a lively group. 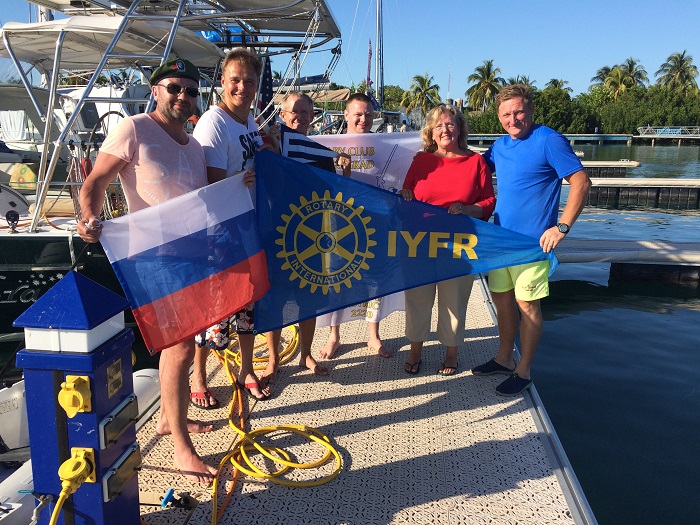 We also enjoyed cocktails with a young couple Monique and Garth, barely 30 years old, who have been sailing for three years, beginning in New Zealand aboard their boat Heartbeat.  They have made it all the way across the Pacific, “up hill” against the trades and if that’s not amazing enough, they both suffer from “mal-de-mer” for the first few days of every passage.  Tough “kids”.   After Cuba they will be sailing to Europe or “wherever”.  Monique keeps a blog, which I have not yet checked out, at svheartbeat.blogspot.com.   I understand that they post about weekly.   I look forward to following their travels.  We tried to convince them to visit us in CT but were unsuccessful.  Oh well, perhaps we’ll visit them in New Zealand someday.  That would be great fun. 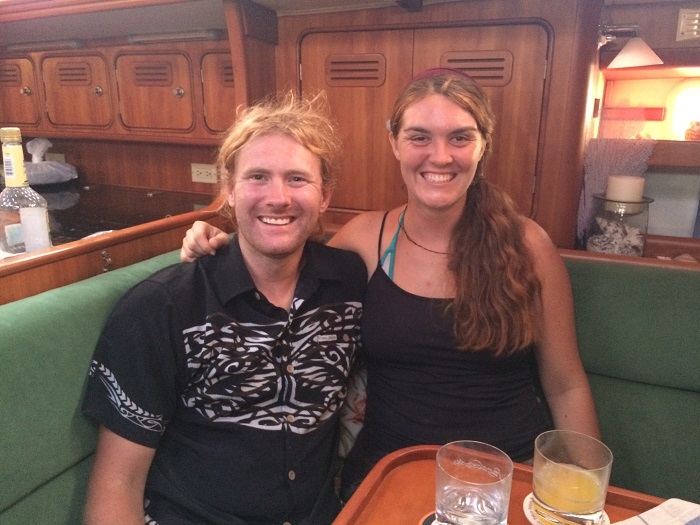 Firmly secured in the “It’s a very small world” department, this SAGA 43, sistership to our last Pandora, Discovery, was recently purchased by a Swiss couple was on the dock next to us.  They had looked at our old Pandora last winter while we were in the Keys and then decided to purchase my friend Carl’s Discovery instead.  Bumping into them here is further proof that it is indeed important to be on your best behavior wherever you go as you just never know who you are going to run into.   The folks in the sailing group SSCA call this “leaving a clean wake” and we are sure glad that we have.  Well, as well as we know, anyway. 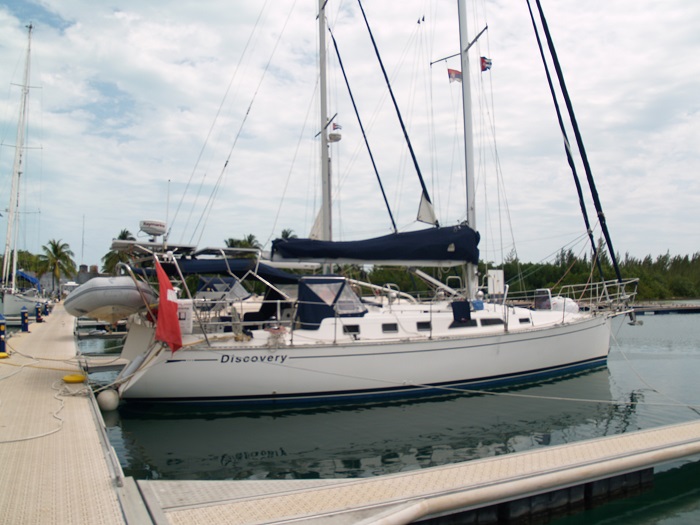 One of the most beautiful beaches in Cuba is on this island and each year thousands of sea turtles agree and visit here to lay their eggs.   In order to ensure the future of these magnificent creatures, the island has established a turtle “nursery”.  They dig up the eggs and transplant them to a protected area and then raise the hatchlings in pens so that they can later release them into the wild.   This way the survival rate is much higher. 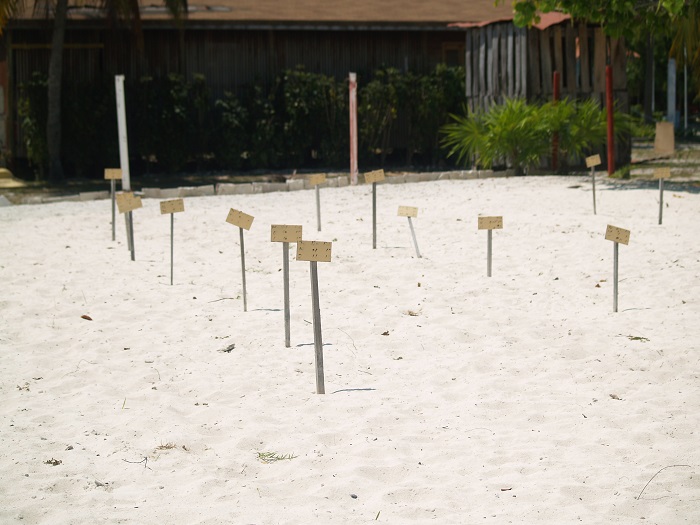 This little guy was about 15’ long.  A beautiful creature. 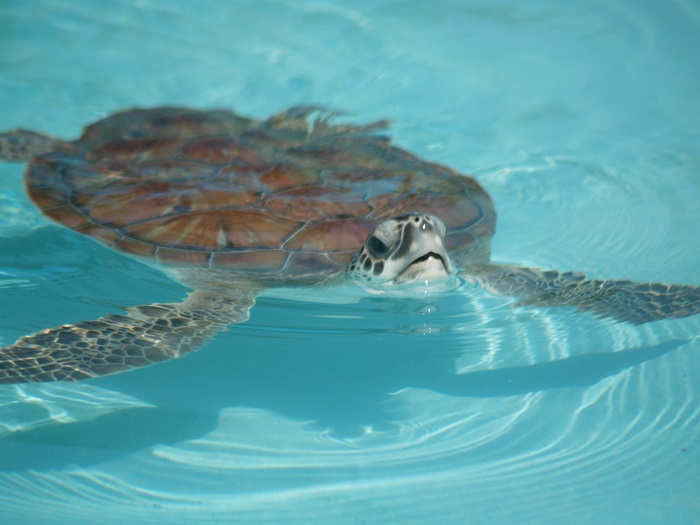 Several pools were full of little 6’ long juveniles.   The patterning on their shells is remarkable.  I was amused by how the placed their front flippers while resting.  “look MA, no hands” 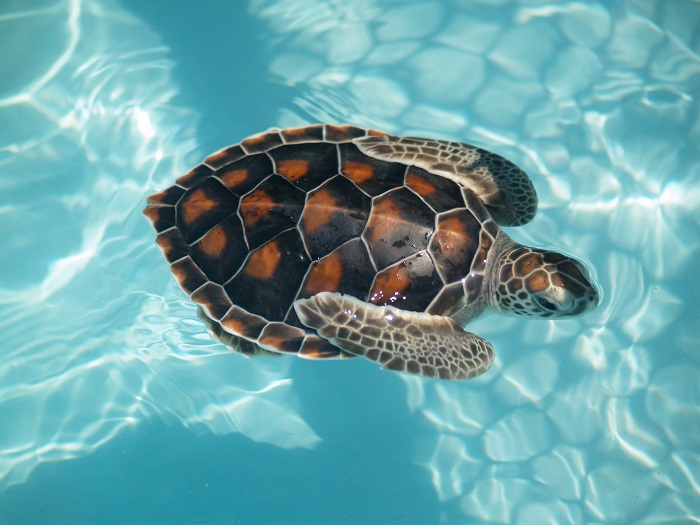 This area is also the first we have seen since entering Cuba that has nice beaches.  Much of the coastline is very rugged east of here and there is a healthy collection of lighthouses.  The designs are all over the lot.  For sure, most of them are quite utilitarian and seem to shout, “stay away”. Oddly, this one on the NW corner of the island is on a craggy point perhaps a mile from deep water. 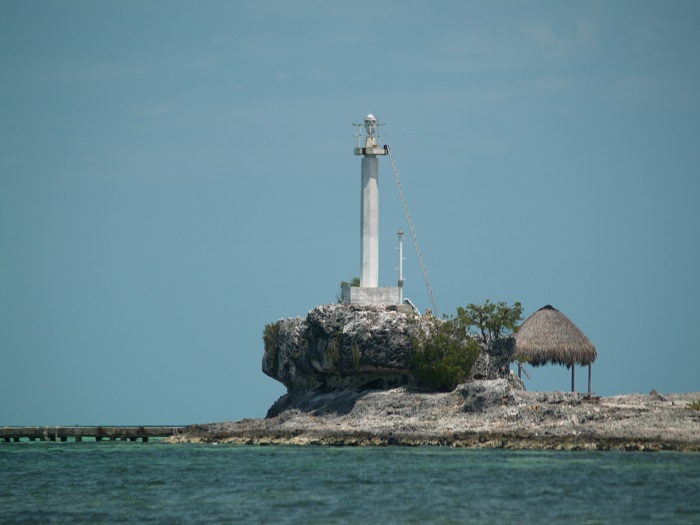 We have seen quite a few marks that are placed a good distance inside the shallows so you have to pay very careful attention to the charts lest you get into shallow water where you don’t expect it.  We have heard a number of cruisers who know of friends who have lost their boats.Pix

Good charts for Cuba are a fairly recent development.  Don’t plan on coming to Cuba expecting to use Raymarine Navionics charts as you will find that what you see on the plotter has little relationship with what’s here.

Just about every Cuban that we have spent time with has expressed excitement about the improving relations with the U.S. government (Brenda and me too, BTW) including the manager of the marina here.  Pier (Peter) has been very friendly and agreed to pose with Brenda and me behind Pandora.  Notice that he’s holding our Essex Yacht Club Burgee. 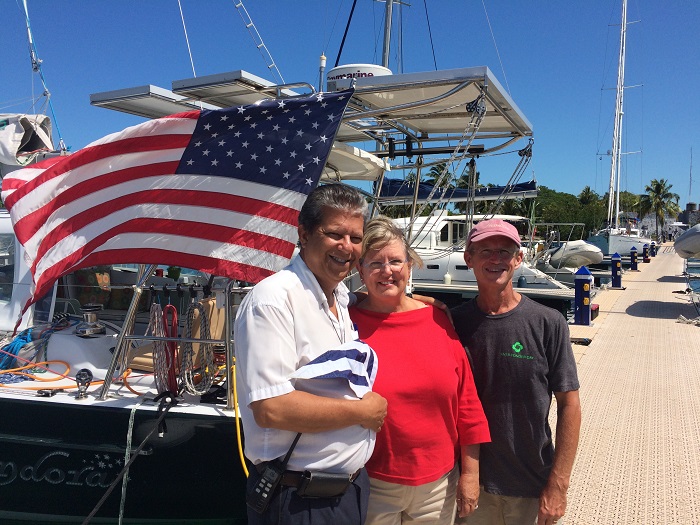 Later I visited with him in his office and he showed me that he has both American and Cuban flags on his desk. 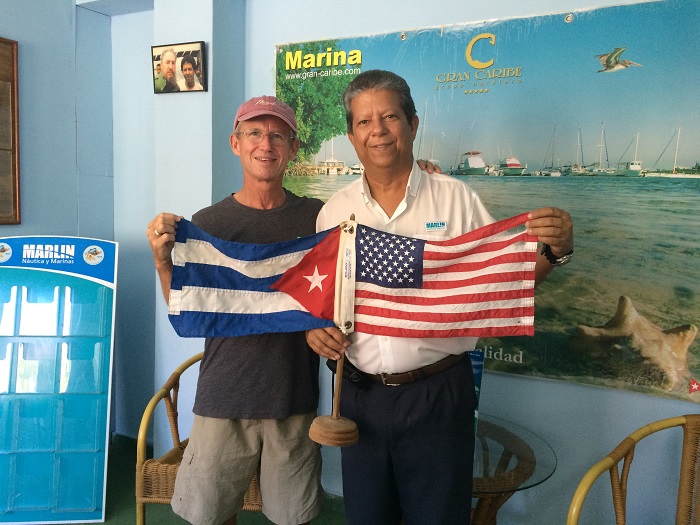 With things changing in many ways, perhaps there will be an opportunity for Pier to visit us in the U.S. to talk about visiting his homeland.  That would be terrific.  I am sure that there would be lots of interest on our end for sure.

He also showed me a photo of him, a bit younger I’d say, when he met Fidel Castro.  I expect that Castro looks more “mature” now too. 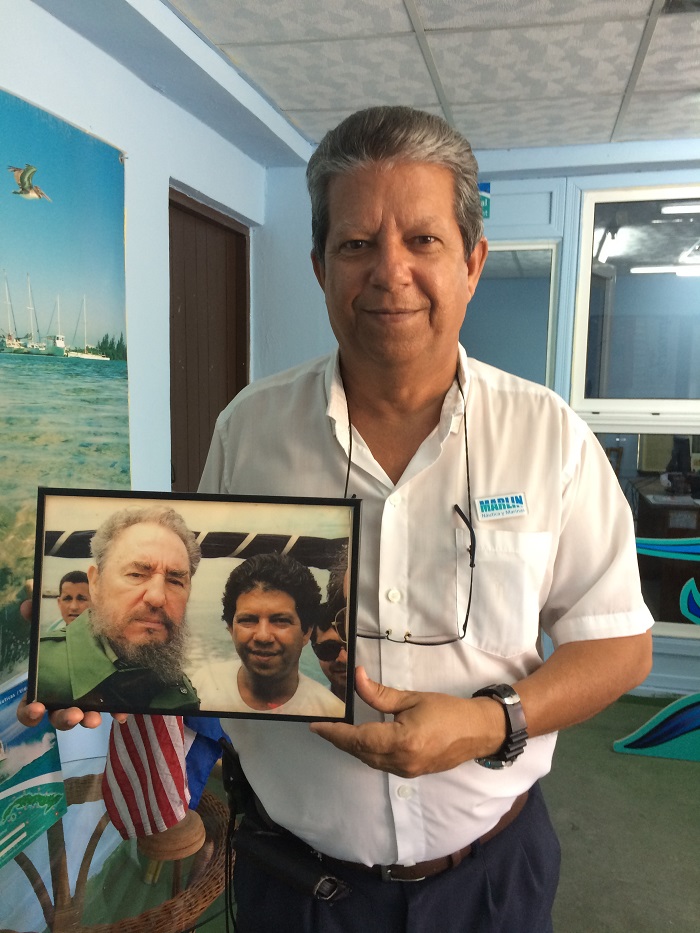 All and all, being in the “other” Largo has been a treat and it’s going to be tough to pry ourselves loose from here as we continue our journey west.

Today looks to be a beautiful day and I hope to spend some more time with Brenda doing a bit of beach combing and snorkeling so that’s it for now.

One response to “The “other” Largo, Cayo Largo, Cuba”