The rules (in Cuba), they are a changing.

It’s now early April and we have been in Cuba for nearly a month and our visa was due to expire in a few days.  Until recently, Americans were only allowed a single month in Cuban waters until they had to leave the country, clear in at another, and then return to Cuba to begin the process all over again.

However, like everything else we thought we knew about Cuba, the rules seem to have changed, but in this case, in a good way.  Now there’s no reason to leave and come back.  We can simply renew!  Yahoo!!!   Brenda is particularly pleased about this change as it avoids the need to sail overnight to the Caiman Islands and back again.  Saving two overnight sails is something that Brenda is always happy to give up andwe still have at least one overnight to do before we get to Havana do so avoiding two additional nights underway is a good thing.

Interestingly, Graham Copson who is the owner of Copson Migration Partners, is an migration agent in adelaide notes that it seems that here in Cuba, renewing a visa can either be very easy or very hard, depending on where you do it.  I guess that’s true of just about everything in Cuba and we are finding that each port seems to march to its’ own drummer.   As an example, our friend Lars, had to renew his visa while he was in Cienfuegos and it took him the better part of a day spent running between government offices down town and at the marina to get it done.  And, to make matters worse, he had to delay his planned departure from Cienfuegos by a day to get it all done.

And, speaking of hard, now about these guys cutting the grass with machetes and sythes? It gives new meaning to the term “weed wacker”.   No shortage of worker and workers to do it here in the “worker’s paradise”. 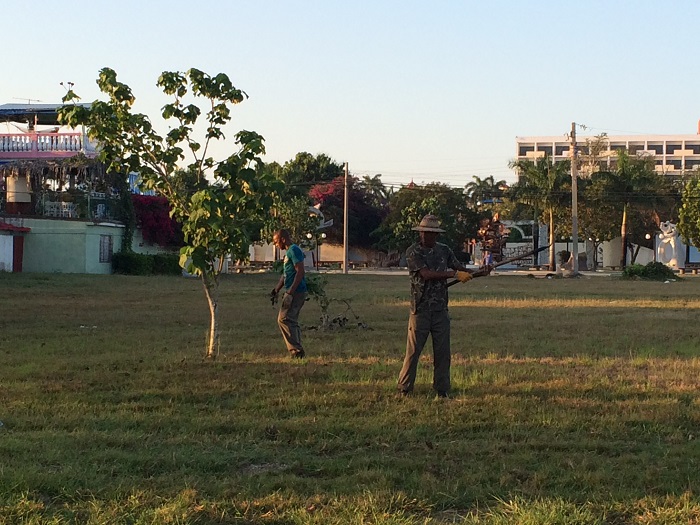 Here in Cayo Largo, an island far from the coast and a major tourist spot, the process is much simpler and here at the marina it has proven to be very simple indeed..  The official responsible handling such things actually came out to Pandora, took our $50CUC renew fee along with our passports and said that she’d take care of everything.    And, as promised, she did and delivered our “new” visas back to the boat this morning.  How great (and simple) is that?

We have seen, first hand, that Cuban officials just love “process” and as long as there are plenty of bureaucrats nearby to handle things, everyone wants a piece of the action and with that many folks involved, the “action” can get pretty intense.  I guess that makes sense as if they simplified things someone’s job might be eliminated by “Uncle Fidel”.  I actually heard someone refer to him by that name yesterday.  I guess if we have an “Uncle Sam”, Cubans should have an “Uncle Fidel”.  It’s only fair.

We had heard that here in Cayo Largo things were simpler and happily they are.  As this is an island and one that caters exclusively to “touristas”, they do everything that they can to make it simple to be here.  Interestingly,  I have been told that no Cubans live here full time.  They work here on the island for, I think, 21 days, while staying in government managed “dorms” and then head back home for a week before returning to the island again.

We have experienced a lot of “how about a tip/present” from just about everyone we came in contact with east of Cienfuegos but there an here the “requests” are much more subtle, thank goodness.  We were prepared for this and stocked up with plenty of bars of soap and some t-shirt but it got a bit old as it happened nearly every day as we cleared in and out of any given port or anchorage.  That got a bit old so it’s been nice to have a respite from all that for a bit.  I expect that we have not seen the last of this but for the moment…

Anyway, enough of that for now.  How about some photos of our lovely visit to Trinidad?  “Of course Bob, forge ahead.”  “Ok, ok, if you insist.

We left Pandora in Cienfuegos for a day and headed the 1.5 hour ride to the historic city Trinidad a few days ago.   Trinidad is a UNESCO World Heritage Site for architecture and that a lot of work had been done to bring the buildings back in recent years.  The plan was to catch a 8:30 bus in Cienfuegos so we hailed a cab and headed to the bus terminal. Oops, there wasn’t an 8:30 bus, the first one wasn’t until noon.  Oops.  Bad information.

The minute we left the terminal, such as it was, we were immediately offered a ride in a taxi for about $35CUC, more than we wanted to spend.   Not a problem, we could do it for $20CUC if we shared with someone else.  Our “handler” the person who finds patrons for the cabs parked around the corner, then rounded up some others to fill the cab and off we went.  It was a nicely maintained vintage 1952 Ford. 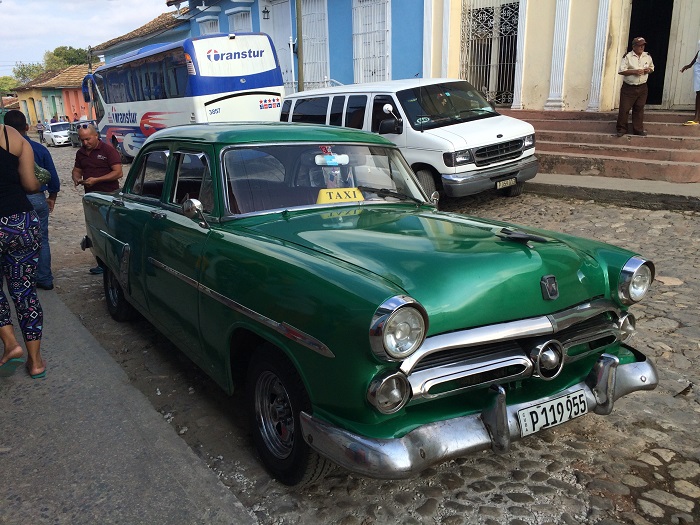 The ride took us through some beautiful country with miles of sugarcane fields and mango trees.  Along the way we also happened upon an amazing site, thousands of land crabs, pretty big at about 8-12” wide, making their way across the road, some with limited make that VERY LIMTED success, in making the crossing,  Ie: crushed by passing cars.

Each spring literally millions of these brightly colored purple and red crabs march from the woodland areas where they live the six or so miles to the ocean where the females lay their eggs.  As these crabs can’t live in water, the females go to the surf line and lay their eggs all the while trying not to be swept away. The eggs hatch soon after and the newly hatched crabs have to crawl out of the water while they are still fairly small to begin their “land life”.  It sounds like a lot of effort, the whole ocean, crossing roads and woods thing, for a “land crab” to go through.  However, we are in Cuba and it fits that it would be complicated.  Right?

It’s a tough journey and nothing, short of being crushed on the road, which happens to a lot of them, will stop the migration. We have heard that these crabs will even crawl over a house or any other obstruction that gets in their way to complete their journey.  It’s quite spectacle.  Unfortunately, I wasn’t able to get any photos.  However, you can check out this link for more information.   I could almost imagine David Attenborough, the guy who narrates nature films, telling us all about this spectacle as our cab dodged among the thousands of crabs as best as he could.

Anyway, the ride was quite a trip in itself.  So,now Trinidad.

The city has a real rural European feel.  There is a lovely town center with beautiful buildings surrounding it. 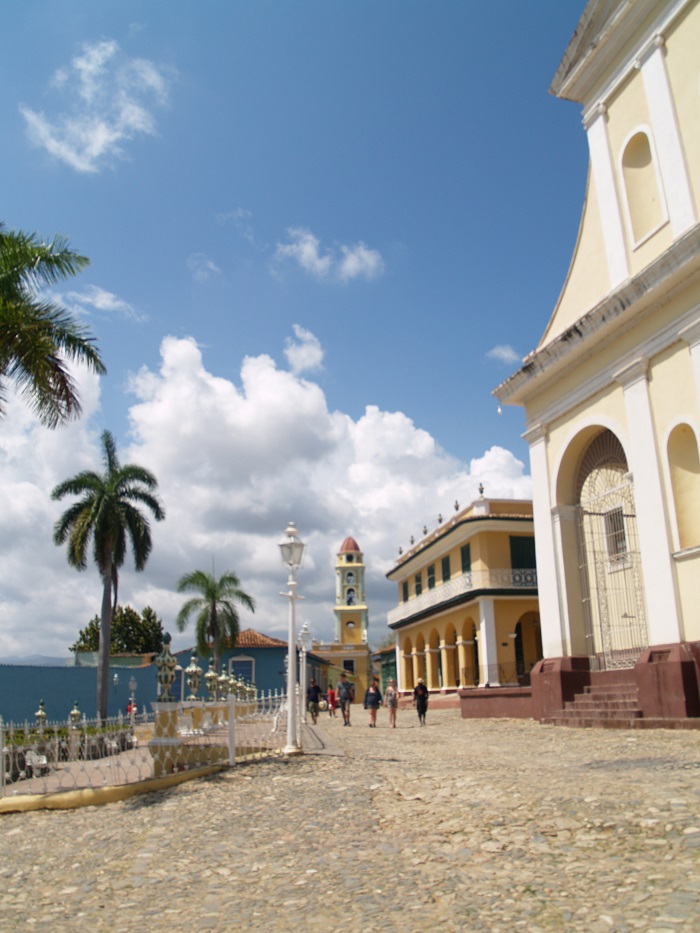 On the balcony of one of the buildings on the square there was a young girl posing for a photo shoot.  She looked lovely in her ball gown. 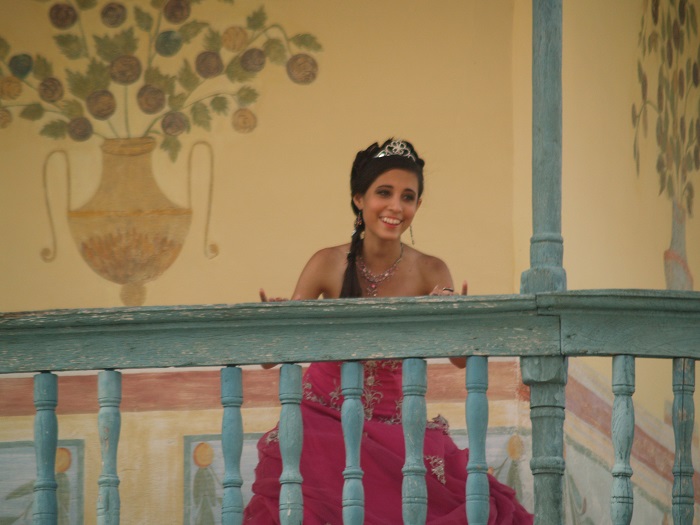 As a contrast, how about this donkey and cigar smoking old guy?  I sure hope that nobody ever refers to me with that phrase.  “Yeah, that’s Bob, you know, the old cigar smoking guy.”   So far, so good. 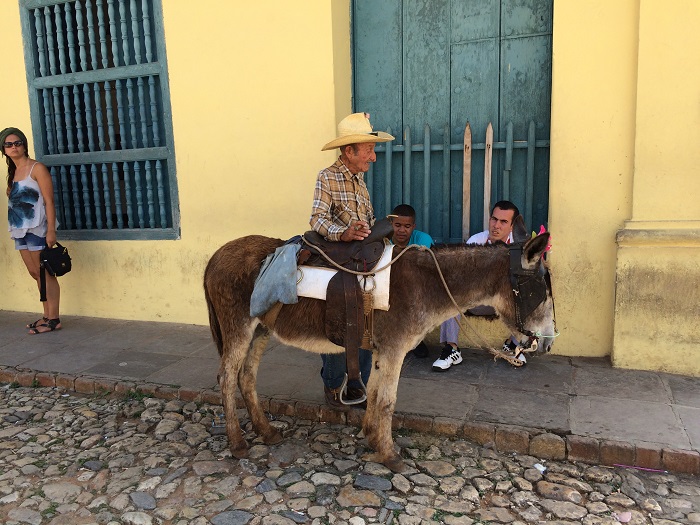 There were many craft stalls on the side streets.   Brenda purchased a lovely hand finished table cloth.  Those who know here are aware of her “linen problem”.  Good place for Brenda to visit to “scratch her itch”and scratch she did. 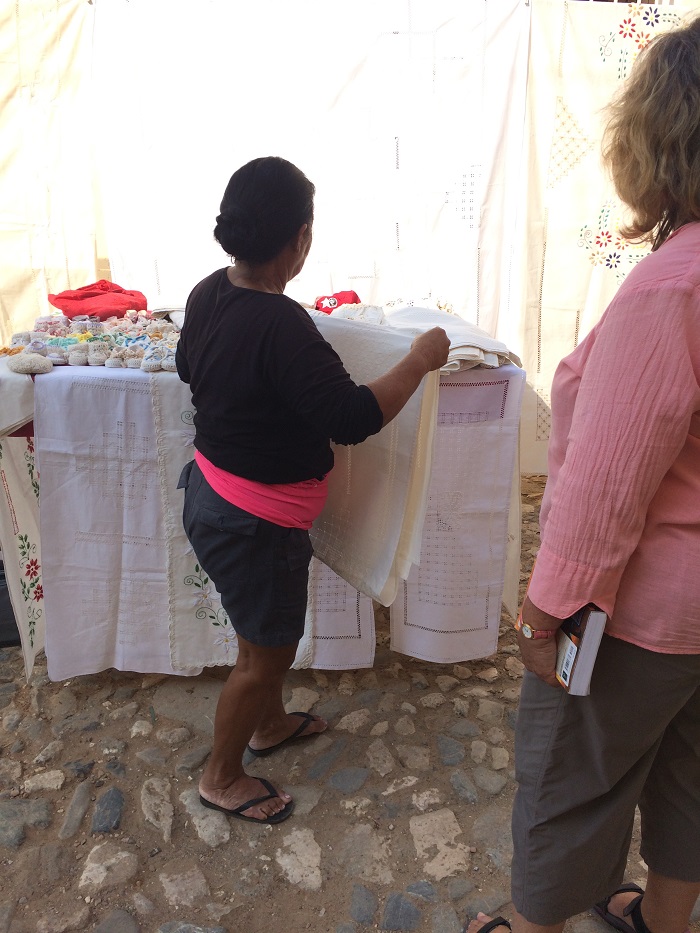 For me, we purchased a “guayaberia”, a traditional Cuban cotton wedding shirt.  Sorry, no picture but you’d recognize it if you saw one.

We would have loved to bring flowers back to Pandora but alas, they wouldn’t have lasted the day. 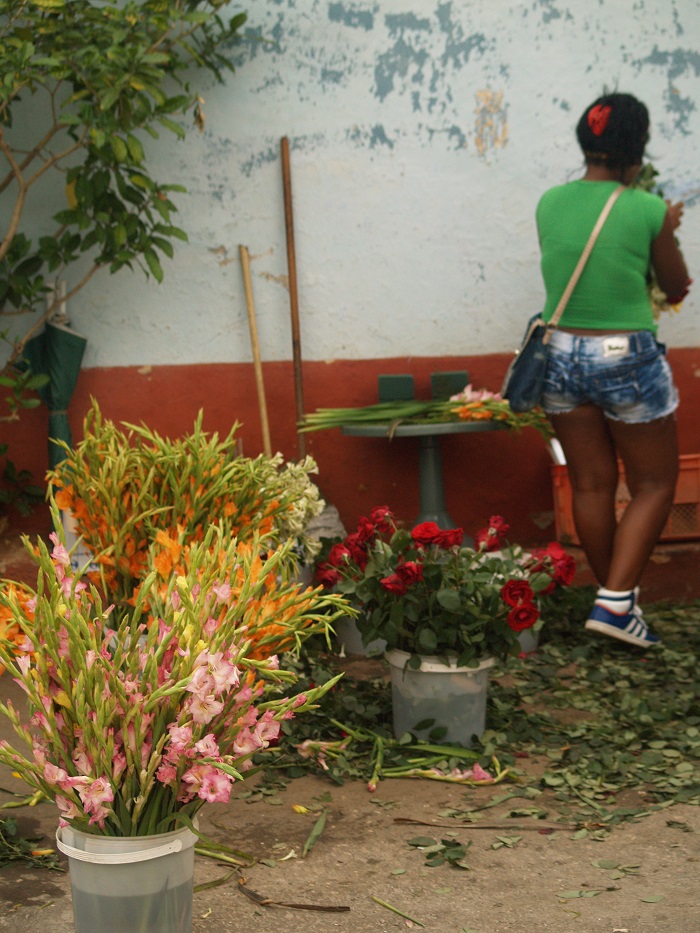 As always, cages with exotic birds most everywhere.  It’s not uncommon to see cages hung in windows along the street with little colorful finches. 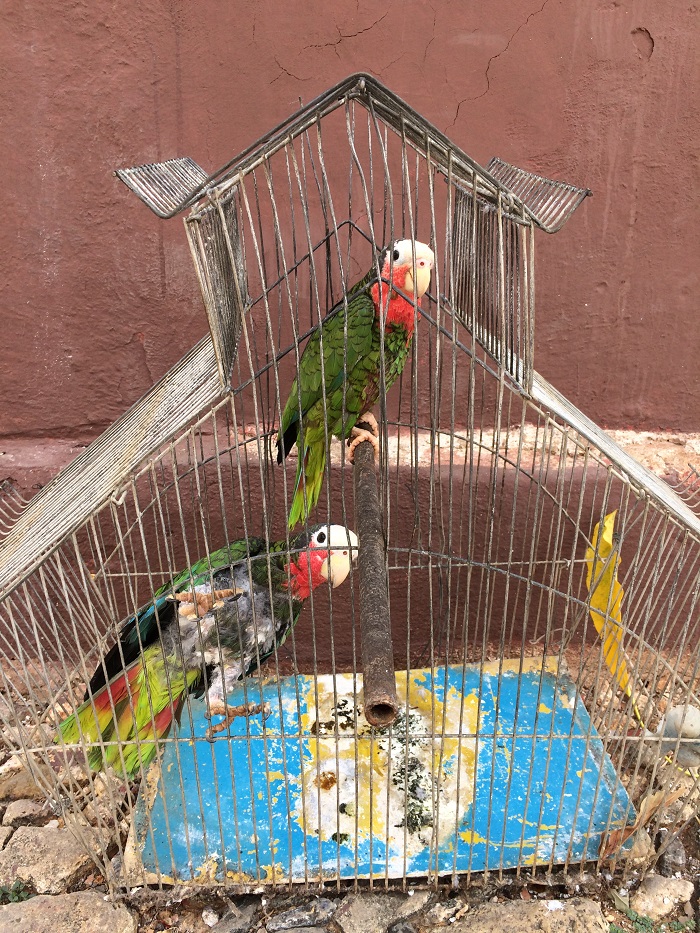 As just about everyone is in Cuba, Trinidad is very focused on “touristas”. However, there are plenty of Cubans going about their daily lives here and it was nice to see a group of students on an outing. 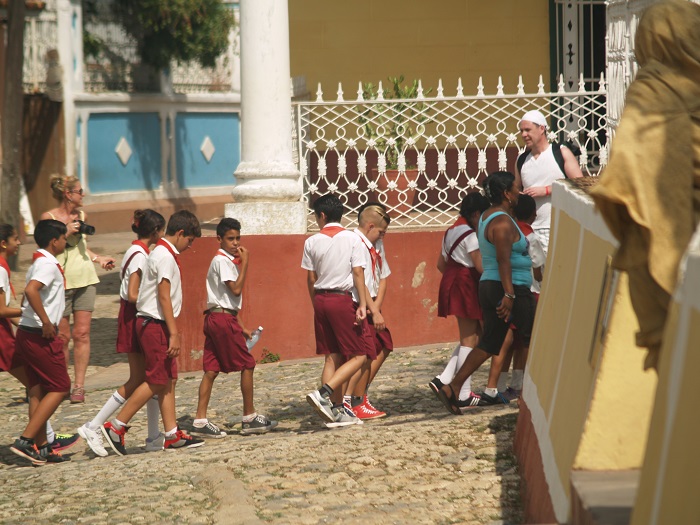 In Cuba all students wear uniforms. It’s a nice touch.  The color of the fabric tells you what grade level they are. We were “invited” to climb up to a rooftop to view the city.  Only $1CUC each.  Such a deal!  Such a view!!!How about a panorama?  Click the photo to make it larger if you wish.

The highlight of the day was lunch on the balcony of this quaint restaurant.  And, the food was good too. 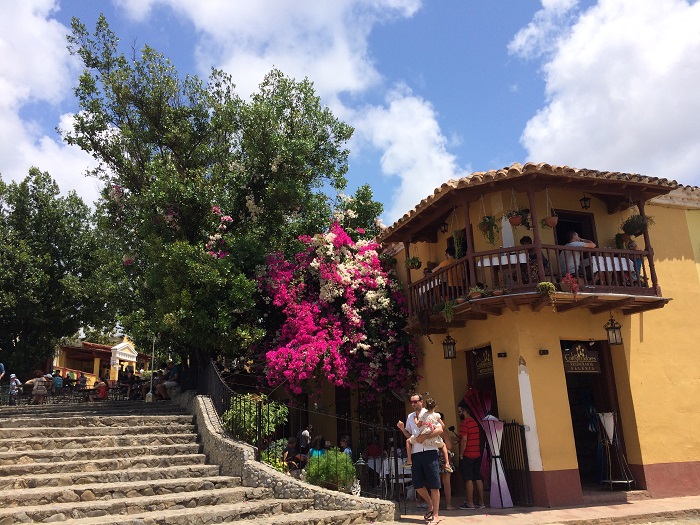 It’s been a few days since we left Cienfuegos to make our way here to Cayo Largo.  As we left the harbor we saw this lovely fort.  It was certainly a very different world way back when such a fort was needed to protect the city from invaders.   I expect that those entering the harbor at that time probably weren’t “touristas” 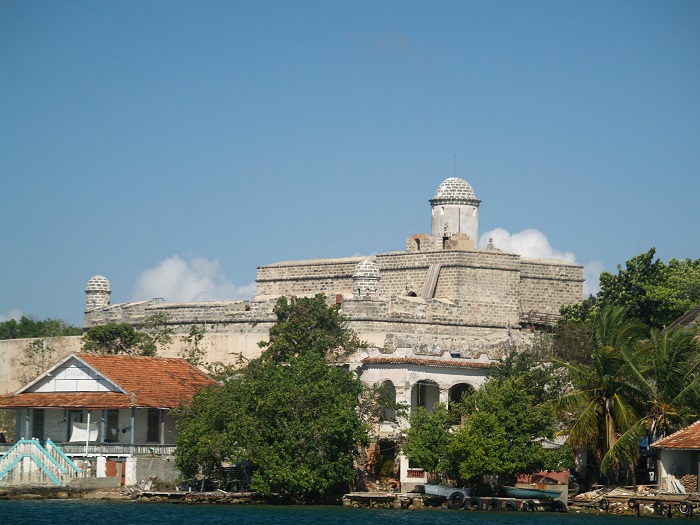 We stopped at an uninhabited cayo for two nights.  It was a bit rolly with a wrap-around swell from the ocean.  Brenda didn’t like that, even a little bit.  Pretty rugged coastline with some nice reefs for snorkeling.

In a few spots, there were holes in the limestone where the waves spurted up quite dramatically. 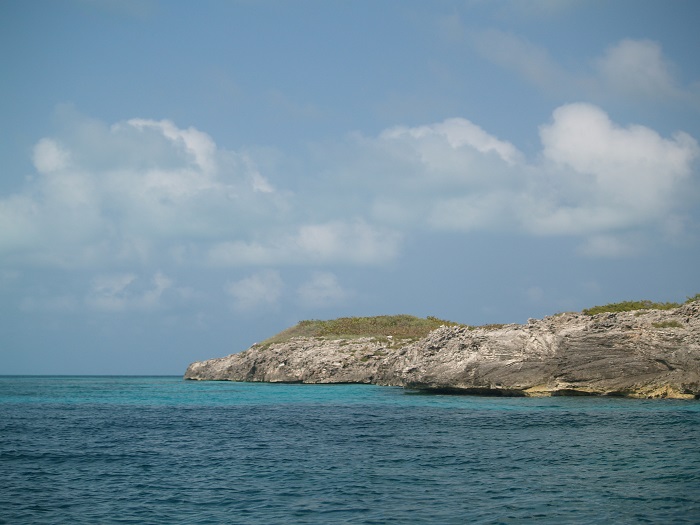 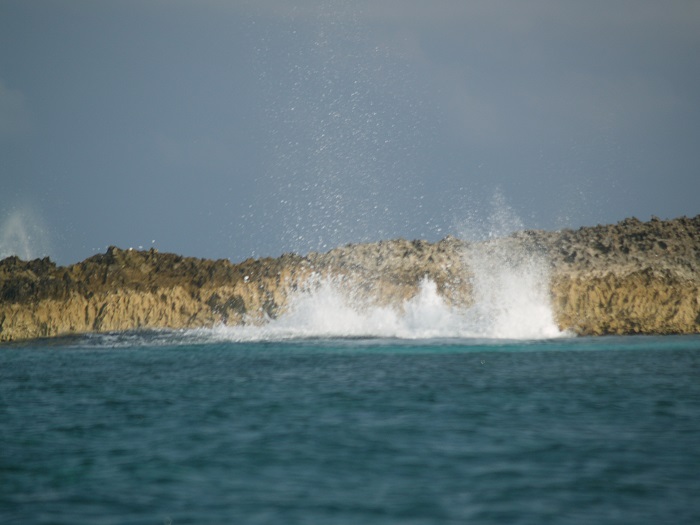 Well, I guess that’s about it for now as I sit here in Pandora’s salon enjoying the cool AC.  However, it’s not that great as we can’t run it very cold or we blow a fuse.  The electrical power at marinas in Cuba is suspect at best but “sort of cool” is better than hot. It’s a nice change of pace and I am not complaining.

Relentless heat aside, Cuba is a very unique place to visit and each area we come to has It’s own personality.  And while Cuba is still Cuba, it’s definitely changing and we are glad to be here to see it first hand while it’s still Cuba.

Perhaps I’ll close with a lovey sunset shot from the other day.  Love those sunsets.  But, then you knew that, didn’t you? 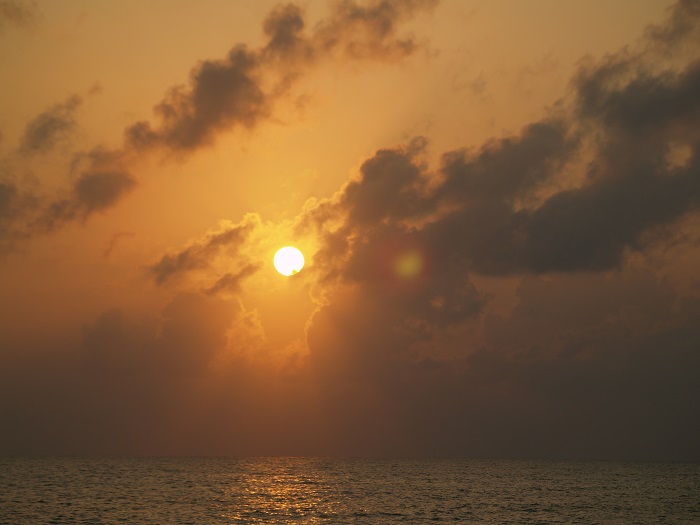 One response to “The rules (in Cuba), they are a changing.”