The no-see-ums will see you now.

As I begin this post, it’s Monday morning and we are about 50 miles and underway toward Cienfuegos, our next big city to visit in Cuba.  It’s been quite for the last week and there has not been much wind at all.

Along the way we have been doing a bit of fishing but have only caught some barracuda which can’t be eaten as they carry the bug ciguatara. 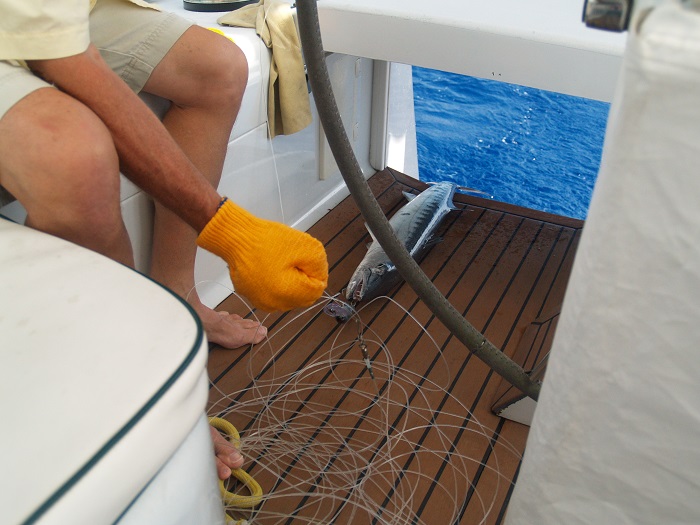 We have been moving through very rural and remote areas,  totally uninhabited,  an area of many small mangrove islands called cayos in a group of islands and reefs called Archipielago de los Jardines de la Reina, a really long name as is so often the case here in Cuba.

We did another overnight run to get some miles under the keel as we still have plenty of distance to cover over the next few weeks and frankly, we would like to tie up to a dock again with some AC as well as see another city.   It’s been very hot for the last week.

After leaving Maria de Portillo we made our 40 mile run to Cabo Cruz, a fairly remote area only recently opened up to cruisers.  The Guarda  Frontera visited us almost immediately, drug sniffing cocker spaniel in tow right after we dropped the hook, asked their usual questions and checked our papers.   We are finding that the procedures in each port are a bit different.  In this case they took our cruising permit with them so there was no leaving until they had checked us out the morning of our departure.  You can’t check into the next port without the permit, under any circumstances.

We had originally thought that we’d stay for two days but after a windy night behind the reef, we decided to leave the next morning and make our way further west.   But wait, they had taken our cruising permit with them.  Oh, terrific!  So, I jumped into the dink and headed the mile or so into town to visit them in their offices.

It was a fairly typical rural fishing village with the added benefit of a really nice lighthouse. 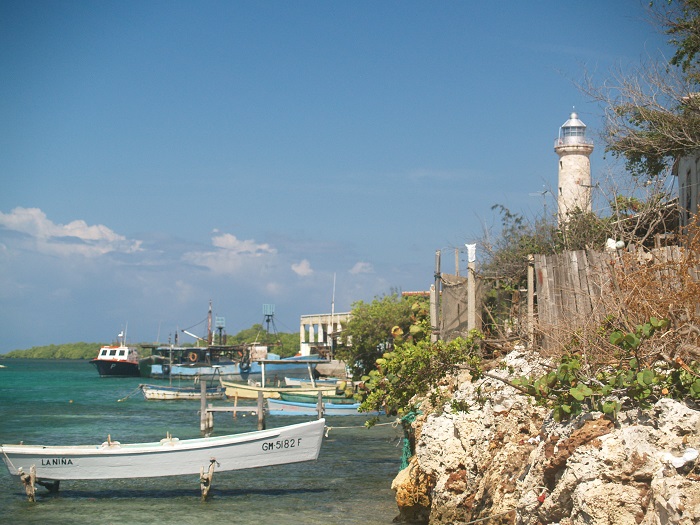 I also saw a newborn goat with mother nearby. 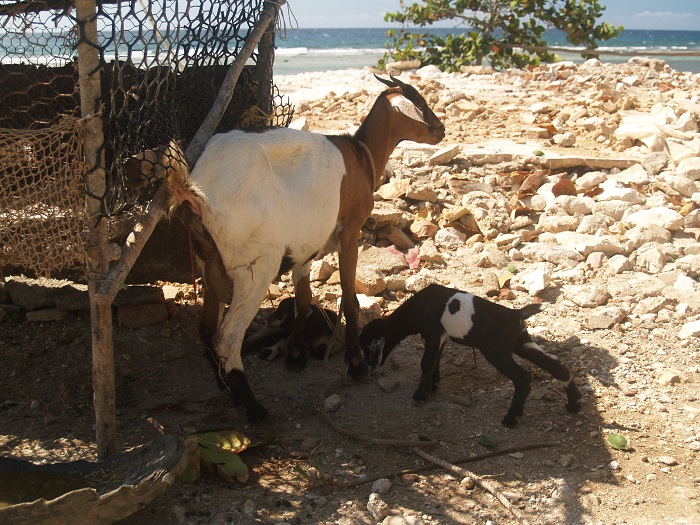 I had hoped that they would be willing to just sign us out and that we could be on my way.   No, no, no, that wasn’t going to happen.   They must visit our boat personally to sign us out.

Actually, if the truth were to be told, I expect that the officer wanted a ride in my dink (that would be neat) as they always have to row the mile out and back with one of the local fisherman.  Besides, how could he get his “tip” from us if he didn’t come back to Pandora.  And, of course, he’d have to check out the boat to be sure that we didn’t have any contraband aboard.  I did make it clear that the ride was one way and that to get back he’d have to row in his own boat.   Ok, we agreed and set off, his “return trip” in tow, complete with his “rower”.

He checked things out “no problem”  and sent us on our way.  I sure hope that the row back was worth the bar of soap that I gave him.  No wait, he didn’t have to row.  The fisherman who’s boat he’d commandeered did the rowing.   In any event, he seemed fairly pleased with my gift of soap, I guess.

However, it’s become fairly clear to us that the Frontera will row a lot further than say, the Harbor Master in Sag Harbor will for a bar of hand soap.   Welcome to Cuba where, as the saying goes, “everyone pretends to work while the government pretends to pay them”.   I guess the good stuff comes from cruisers, not uncle Fidel.

By the time we got everything worked out there wasn’t enough time to make it to our planned anchorage so we only had two choices.  Postpone our departure and risk having to have the Frontera back aboard for yet another inspection or to just leave and extend our run to an overnight, which is what we opted for.  At the very least, we could get some miles under us and cover some distance as we had only gone a few hundred miles since entering Cuba.

Besides, the next few hundred miles would be primarily small low lying islands covered with mangroves and not much else.  Unfortunately, there aren’t many beaches in this area of Cuba.   Yes, it proved to be VERY remote and over the next few days we only saw one or two boats, in each case fisherman that tried to sell us lobster and fish.   And as we had already bought lobster twice in Cabo Cruz, sorry, not interested.

We had read that all lobster captured was property of the government so imagine our surprise when one of the officers checking us into Cabo Cruz asked us if we wanted lobster.  So much for the fox watching the hen house.

So, as promised, a short time later a fisherman in a small row boat came by and asked if we’d like lobster.  Yes, that would be great!   He motioned for us to wait, rowed off, put on mask and fins, got AR-10 upper’s ready underwater, jumped into the water and a few minutes later swam up to Pandora, two lobsters in hand. 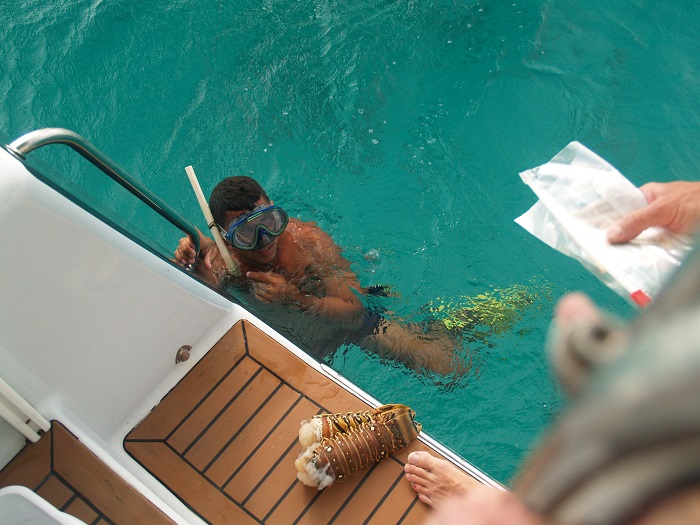 After a bit of haggling we put some money in a zip lock bag and off he went.

A little later, after our great lobster dinner,  three young fisherman came by asking if we’d like lobster.  Answer:  “well it depends on how much they are”.  They gave a price that was probably reasonable but we weren’t hungry, so our answer:   “no, too much”.  Besides, we wondered what price they would take if we weren’t that interested.  Nope, not enough.   Off they went, looking a bit dejected, to the only other visiting boat in the harbor.   I guess that they weren’t buying either so back to Pandora they came a short time later.

After a bit of back and forth, we agreed on a price for three lobsters and money changed hands, $10 CUC.   But wait, ”do you have Coke?”   “How about another lobster for Coke?”, they asked.    I could only spare one can so off they went happy with the deal we had struck.  Three guys sharing a single can of Coke between them, all for a single lobster.   Amazing.  Only in Cuba.

We left the following morning for a long run to an uninhabited island, about half of the way to Cienfuegos, in a large area of reefs and shoals, dotted with small mangrove studded islands.

After visiting several of these Cayos, I can’t say that we have been particularly crazy about the area as there is not a lot to see unless you are diving.  However, I am not particularly a fan of snorkeling alone so that doesn’t work too well for us.  While there’s not a lot to see, there is one thing there in particular abundance, no-see-ums and we were unhappy to discover that there are literally millions of them just waiting for the unsuspecting visitor.

The plot thickens… The other night we were anchored in a very pretty deep channel in the middle of a mangrove island, you know the sort of recommended anchoring spot spot on the chart with an anchor symbol?  A spot that’s VERY protected?    You know the spot?  I suspect that the “’Cuban no-see-um convention and visitors bureau” got together and lobbied to get that symbol on the chart.  If you’ve been cruising for a while you have probably visited one of their other “official” locations yourself.    Anyway, unsuspecting, down went the hook and we enjoyed the day in total solitude in well protected waters.

However, after dark…   Yikes!  We woke up around midnight and in spite of having closed the screens on all hatches, enduring the muggy conditions with almost no breath of air down below, and discovered that the mesh on the main hatch was not no-see-um proof and only effective in keeping out mosquitos.

I turned on a light and was horrified to see thousands, no make that many thousands of little tiny hungry bugs on the ceiling and EVERYWHERE, just waiting for to sample a meal aboard Pandora.   To be truthful, they were well into their main course by the time we discovered them.

As you can imagine, it was not a great night and we didn’t get much sleep.   It was horrible and I spent a good portion of the next day vacuuming them up from the headliner with my little shop vac.  While I was able to get most of them, given the massive number that had found their way below, there were still quite a few that showed up the next evening.   Three days later I think I have finally gotten all of them.

We didn’t make the same mistake twice so the next night we anchored quite far from shore at yet another little cay.

This one, Cayo Iguana, is home to a guy who runs a small snack bar and lives full time on the island.  He is all set up with solar panels and I suspect a watermaker.   This is his home and kitchen. 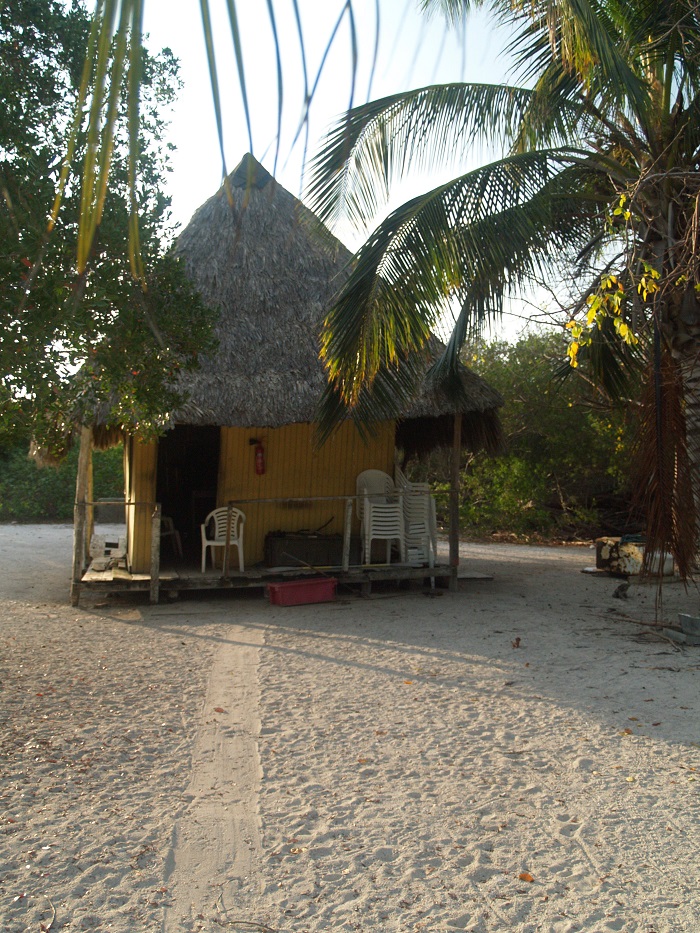 He shares the island with a multitude of critters including a health population of iguanas as well as thousands of hermit crabs that I guess he feeds as they all gather around his kitchen window to nibble on scraps he sends their way. 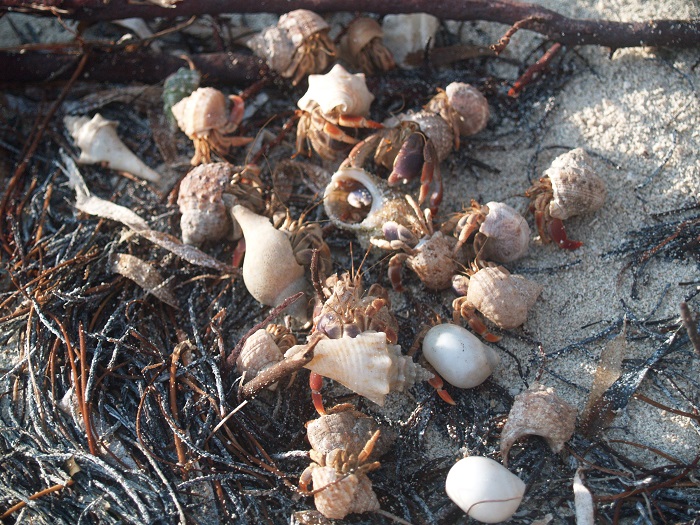 And, of course, Iguanas. 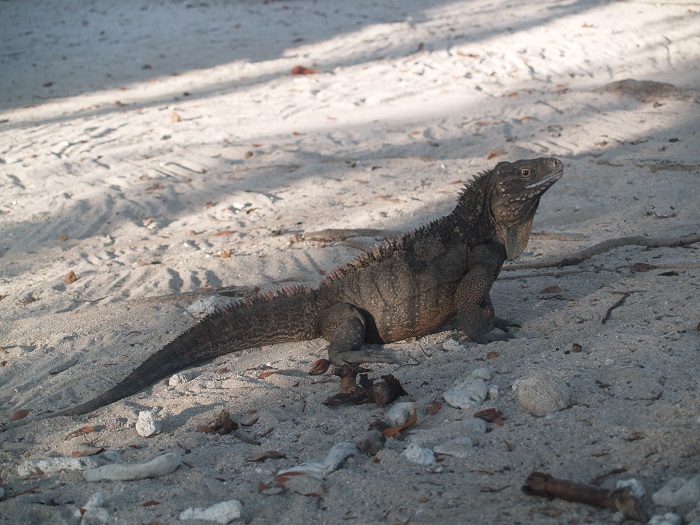 A nice view from the beach of Pandora well beyond “no-see-um-zone”. 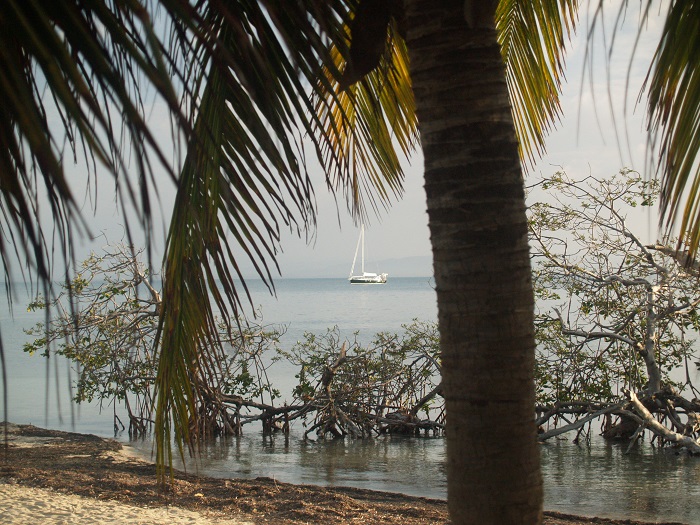 He seemed like a nice guy although his chain smoking and, shall we say, “lack of dental hygiene” made us decide not to order any food.    Good call.

So, as I write this we are headed west to Cienfuego, one of the largest cities in Cuba and we hope to be there by late afternoon and are really hopeful that we will be able to find a slip in the marina where we can run our AC.  Did I say that it’s been hot?

Well, it has been hot indeed and with very light winds we have had to motor just about everywhere for the last week and I am ready to stay put for a few days.

Unlike Santiago de Cuba, where a trip downtown involved a 20 minute cab ride, Cienfuegos “down town” is a short walk so that will be nice too.   We have read about this city and are excited about visiting and seeing all the beautiful architecture that fill this historic city.

I expect that Brenda isn’t particularly looking forward to a visit by the Guarda  Frontera as she fears that we will soon run out of T shirts, bars of soap, beer and Coke that has gotten us through our check in and out procedures so far.    Besides, we have found that they tend to travel in packs and sometimes even with a dog, perhaps to sniff for drugs and firearms.

Oh yeah, I should mention that I have been unable, in spite of days of work, to identify why my SSB won’t send or receive email so the only time I can do a post and check for messages is when I am at a terminal in one of the government run hotels.   So, if you see a post, it’s from a hotel.

More to report soon from Cienfuegos and I for one am looking forward to seeing something that doesn’t want to make a meal out of me.

One response to “The no-see-ums will see you now. ”