It’s Tuesday morning and we are getting ready to head out later this morning to explore the city of Santiago de Cuba.  We have hired Noel, a local taxi driver that was recommended to us a couple, Brian and Nancy from Canada sailing aboard “Afreeka”.  Love that name for a boat.  After buying the boat in June, they got ready in record time to head out and have spent the last six months heading south, beginning with the Erie Canal, down the U.S. coast all the way to Marathon FL in the Keys.  They have spent the last month cruising the south coast of Cuba on their way to their ultimate destination, Trinidad.  They are quite the adventurers, although new to boating, having spent a lot of time in Tanzania Africa by land over the last few years.  Can you find Tanzania on a map?  I surely can’t.

We spent some time with them yesterday to get a lay of the (Cuba) land.  As they are heading east toward Haiti, against the prevailing winds, they do their sailing at night and headed out from the marina  at dusk last night to take advantage of the katabatic winds coming down from the mountains overnight.

Katabatic winds are the cooling air from the mountains rushes downhill towards the coast at night and shift the easterly trade winds from east to the north.  That makes for a nice close reach sail toward the east as opposed to having winds on the nose as is the case during the daylight hours.

It was nice to get their perspective, albeit a bit negative as they were plenty frustrated from waiting for fuel and water for the last few days.  The marina’s fuel pumps have been out of commission for years and water has to be brought in by tanker truck and that had been promised for days and not yet delivered.  I checked again this morning and they said “today, we hope”.  Sounds familiar, I guess.  It’s a good thing that we have a watermaker as Brenda isn’t happy when she has to skip her shower.  Me too.  Can you say sticky?

Water is a problem in this area and all homes have large water tanks on their roof so that they can store water when the municipal supply is working and still have some to use when it’s not.  I was told by Noel that sometimes they can’t get water for ten days at a time so they have to keep plenty on hand, just in case.

After all the months of preparation for getting to Cuba, I can’t believe that we are finally here.  In spite of all the reading about what the experience is like, it’s quite different than what we had heard.  We had read that the clearing in process took hours and that we’d have to give up most or all of our fresh food and that any chicken would have to go too.   We were prepared for “whatever”and had all of our documents in place, ready to go.  We even prepared a detailed “crew list” document with all the particulars of the boat and crew which I printed out in duplicate.

As we made our way west along the coast, we were entranced by the views of the mountains. 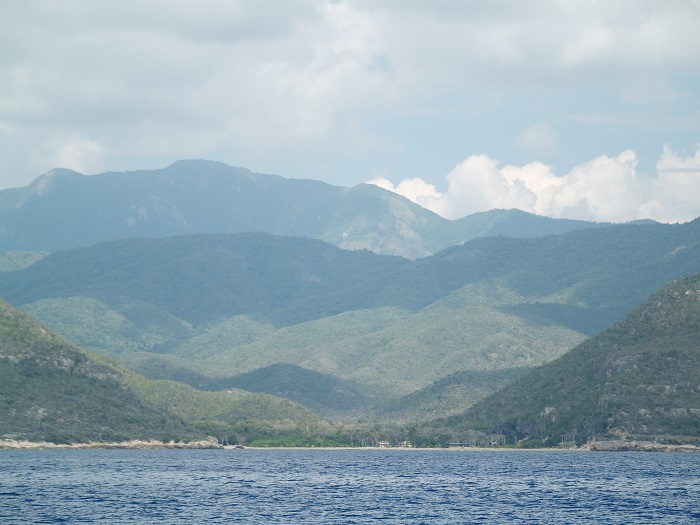 As we approached the entrance of the harbor, and a dramatic one it is, we began hailing the Guarda Frontera on the VHF radio.  We had been told to begin calling when we were about 15 miles out with the understanding that they probably wouldn’t respond until we were within a few miles as they only have hand held VHF radios.

After spending time in the Bahamas, with its low lying islands, over the last few years, I wasn’t prepared for the dramatic landscape and tall mountains of Cuba’s south coast.   What a dramatic view of the coast with mountains everywhere.

As we approached the harbor, we were greeted by a fabulous fort, Castillo de Morro, built in the 1500s.  What a sight. We continued past the fort and into the harbor, all the while hailing the authorities, again with no response.   The channel near the fort is literally hundreds of feet deep with cliffs looming up dramatically on either side.   I was busily snapping photos of the fort and was startled, no make that shocked to hear a booming voice shouting in Spanish so close that I thought someone was in the cockpit with us.  It turns out that I was almost correct as a moment later I saw a head bobbing in our wake, complete with snorkel and wet suit.  There was someone in the water and I had nearly run him down.   What the %$#@ was someone swimming in a major shipping channel with ships like this heading in and out all day long.

As we came within sight of Marina Santiago, we were finally hailed on the radio by Guarda Frontera and instructed to anchor on the other side of the harbor in the “quarantine” area, about a mile from the marina.    Moments later a launch pulled up and dropped off the health inspector, a young Cuban woman with really, really red hair.    We offered her a cold Coke which she accepted with thanks and quietly slipped it into her purse.  She took our temperature with a laser thermometer pointed at our foreheads smiled and declared Brenda to be “hot”.  Yes, she can be that, I agreed.

She knew only a very little English and patiently waited while we thumbed through the phrase book to find answers to her questions. The whole process lasted about an hour and was very pleasant. When she was finished she started talking about “toasting” our arrival.  After a LOT of back and forth and puzzled looks from us, we finally realized that she was looking for a beer.  Of course!  Brenda and I split one and she finished her’s off in short order.  We exchanged information about family, showed photos of children all around and posed for a “selfie”.  What a hoot.  “Welcome to Cuba!” 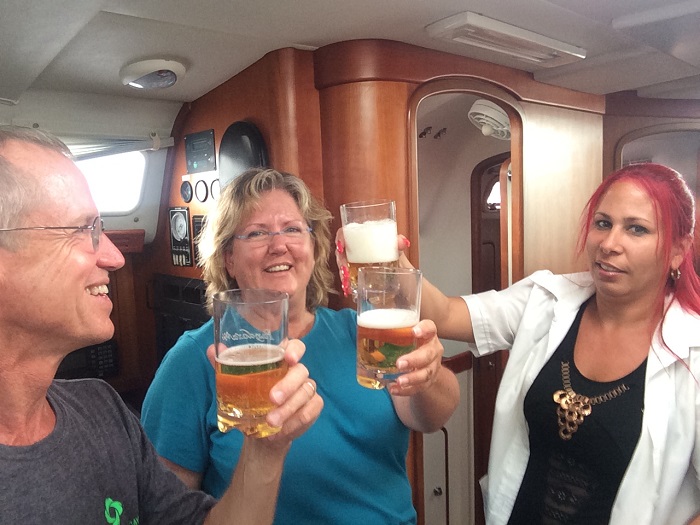 After that, we raised the anchor and headed back across the harbor and anchored as there was no room at the dock for us.  We dropped the dink and took her ashore and us to meet with Immigration.  That process took another hour and was followed by that official coming out to Pandora where he searched every nook and cranny for who knows what.   After that, a beer together.

The whole process indeed took several hours and was very interesting.  Brenda posted her impressions on her blog about all of this and it’s really worth reading.  Check it out here.

There is a small cove adjacent to the marina where we anchored for the night but the holding wasn’t good at all in soft lumpy mud and in nearly 50’ of water.  I am not used to anchoring in water that deep and it took nearly all of our chain.  The next morning we moved to a shallower area nearby to try our hand at another spot, this time in about 15’ of water.  The hook went down and we backed down to be sure that it was well set and settled down below for lunch.

About 45 minutes later we were rousted by voices on deck, poked our heads up and were shocked to learn that while we were having lunch we had dragged our anchor somehow and were now nearly a mile across the harbor and less than 100’ from a very nasty concrete dock.  WHAT!

We never heard or felt anything as the boat slowly dragged into deep water.  And it wasn’t particularly windy.  We could not believe our luck that someone had seen us drifting slowly across a busy harbor and was nice enough to warn us as we were literally moments from hitting a really nasty concrete dock.    Our rescuers advised us that it was “very dangerous”.  No S#*T Sherlock.

Like the well-oiled machine that we are, we picked up the anchor, which was hanging straight down and moved back to the first place we had anchored to try our luck again.  We still wanted to be on the dock but now the wind was blowing too hard and directly onto the dock.  As the docks are concrete and massive, we didn’t want to risk it.   Enough excitement for one day.

Anyway, I set an anchor alarm and we still had a nervous night.  No more anchoring for us so this morning, in light winds, we tied up to the dock all by ourselves as there wasn’t anyone from the marina responding to help.  No loss of life.

Interestingly, you pay in Cuba for both anchoring and for tying up at a dock.  The fee to anchor is about .25 per foot/day and .45 foot/day on the dock, water and electricity included.    That’s $21.15 per day on the dock or only about $9 a day more than anchoring.   Such a deal, Cuban style.

So, what about money?  We had been told that the Cuban tourist peso or CUC had an exchange rate of about $.85 Canadian and about the same for American and that the “Greenback”, on top of the exchange rate, was also “taxed” at a rate of about 20%.   For that reason, we were advised to bring Canadian, which we did.  Keep in mind that if we run out of funds while we are here there is absolutely no way to get more money from our account.

That’s what we were told…  So, here’s what actually happens.  Canadian trades at about $.55 per CUC and U.S. at $.85 CUC.  That doesn’t sound too bad but we traded U.S. for Canadian in FL at $.85.   Anyway, the math confounds me but all I know is that will have to be very careful not to run out of $$ before we leave the country in about 6 weeks as we have less than we thought to spend.  Fingers crossed.

The marina and area is beautiful if quite run down.  It’s clear that the Cubans take good care of what they have and try to make the most of their circumstances.  Everything is old but tidy.

There are ferry boats constantly moving about, jammed to the gills with “commuters”.  So, how many life jackets are there on board?  I don’t expect that the Cuban Coast Guard is charged with policing that particular detail.

It’s illegal for a Cubans to own a boat that’s more than about 20’ long and there are plenty of fisherman out working the waters, some floating around on nothing but an inner tube.    Most of the boats are inboards, probably repurposed land based engines putting along noisily.

I guess that’s about all for now as we have to get ready to head into town, a 15 minute cab ride.  Our driver Noel, will take us there and come back later today, with many stops along the way for $20 total for much of the day.  How much is that after the exchange rate?  Hmm…

Oh yeah, we have seen a few great cars.  How about this Karman Giha?   What a paint job.  Love the rear view mirrors.  I’ll bet that this would get lots of second looks at a car show in the U.S.

Welcome to Cuba, indeed.  It’s good to be here.