Heading out, but when?

It’s Wednesday morning and we are still here in Ft Lauderdale. It’s been a challenging week with terrific wind and a few nasty fronts, complete with some impressive gusts over 40kts and tons of rain.  We even had the fun of re-anchoring in the wee hours, which is always good for a laugh or two.  Brenda particularly enjoys those special moments together.

Actually, yesterday might have been the first day since our arrival that I didn’t have to bail out the dink at least once.   Happily, we are getting some respite from the wind as it’s supposed to be pretty light until perhaps Friday when it’s expected to get “sporty” again and blow at near gale strength.   I guess that this is par for the course in early winter in Florida when the “fun” returns every few days.

It’s pretty cool too.  No, I won’t say cold as it will just make my brother irate as he lives in northeast PA where cold means something.  So far, the “sunny” in “sunny Florida” has alluded us as we have been here for more than two weeks and I can only count a couple of days when the sun as shown it’s face for more than a few hours at a time.  So much for “solar power” ruling the day.  However, it’s nice to see that the sun is, sort of, out in force as I write this.

I spoke with Chris Parker, the weather router, both yesterday and on Monday with the hope of “getting out of Dodge” and crossing to the Berry Islands today but the wind is a bit strong from the east than we’d like and with so many miles to go against adverse winds and seas, we opted to wait until the next “window”. Unfortunately, this means that we will be stuck here through the weekend.   However, he feels pretty confident that we will be able to head out perhaps as early as Sunday evening to make the 125 mile run to Great Harbor Key where we will be treating ourselves to a stay for two weeks or so in the marina, something that we have not done in the past.  We are really looking forward to it as we have heard that it’s a fun spot.

The “window” that we were going to use this week was a narrow one, lasting less than 24 hours.  We could have made it over to Bimini but once there, we would have been stuck through the weekend anyway and would have had to check into a marina at about $100 per day.  The rates for a marina are much higher if you only stay a few days than if you plan a longer stay.  Once you have stayed ten days or so, the rate for a whole month isn’t much different.

So, the plan now is to hope for the best and plan on leaving Sunday or Monday.  That’s fine I guess, as we have been struggling to get everything done prior to leaving the States.  I just found out that there are two more forms that I have to deal with in order to complete our plans to visit Cuba.  It seems that we need to submit a form to the U.S. Coast Guard to let them know of our plans and itinerary.  They also need the particulars of the approvals from State and Commerce.   Oddly, these forms have to be faxed verses e-mailed and must be printed out and signed.  I can’t say that the “nautical fax” machine is active on Pandora. However, we do have a printer.  There is also some sort waiver form from OFAC, the Office of Foreign Asset Control, that I have to submit to avoid a 180 day waiting period before we can re-import Pandora.   Not sure about that one.  I’ll need to do some work on that today.

We also will be getting some Canadian currency as it has a better exchange rate in Cuba as the Cuban government imposes a 20% tax on Greenbacks.   There’s Fidel sticking it to the Yanks.  I guess fair is fair.   However, he did start it with the whole “revolution thing”, right?

Anyway, Ft Lauderdale is nice but I am so looking forward to the Bahamas with warm clear water.  Besides, our daily runs to the store for “one more thing”, have to end at some point or I’ll have to haul Pandora again and raise the waterline.  Just how many y0gurts do we really need?  Bottles of wine?  Well, that’s another question entirely.  Besides, a boat does need ballast, right?

Through all of this I have ordered plenty of last minute items including a hand held depth finder, that arrived yesterday.  It will come in handy as we pick our way through unfamiliar waters in Cuba.  There are times when we want to enter a spot and aren’t sure if it’s deep enough so having a portable depth finder that I can take ahead in the dink will be very useful.  It’s pretty neat and even has a thermometer in it.   “No Bob, we can’t go in there, the water is not warm enough.  Check over there.  It looks warmer over there, yes to the right.”

We have also purchased courtesy flags for the countries that we plan to visit and just for fun, I laid them out in the cockpit the other evening.  Of course, the middle one is our own Essex Yacht Club burgee.   In clockwise order, Cuba, Jamaica, Bahamas and The Caiman Islands, all spots that we may/will stop along the way. 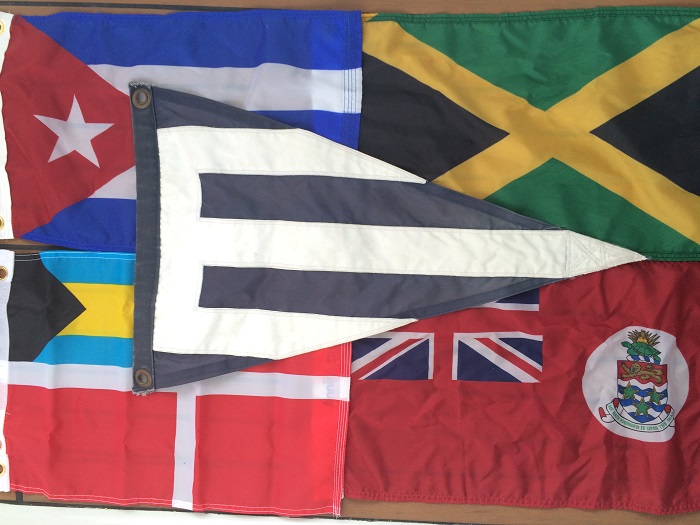 Last night over an “adult beverage”, I remarked to Brenda that, when we were sailing Long Island Sound way back when in our 20’ Cape Cod Catboat, that I never imagined that we’d ever visit these places by boat.   Her reaction wasn’t completely clear.   Was it a smile or grimace.  Hmm…  You know, she was the one who came up with Pandora’s name.   Anyway, cool photo.

As  I reminisce, I should mention that we had a lovely visit with our long-time, notice that I didn’t say “old”, friends Linda and Richard.  Linda worked with me for perhaps a decade back in one of my “previous lives” and we try to visit her when we are passing through West Palm Beach, where they live.  Linda is the keeper of the last remaining stand of “Bob the banana”, offspring of a plant that Brenda and I grew from a shoot that we purchased back in the 70s while we were dating in high school.  We kept it alive for many years, in our home and later in a greenhouse that we kept for over 20 years.  When we moved away from NJ, four years ago, we tossed the last of our “Bob”.  However, he lives on with Linda and Richard as they planted a shoot that I gave to Linda when they moved to Florida almost ten years ago.  Here’s a shot of me, Linda and “Bob”.  He’s doing well, I would say and pays his way by producing hundreds of bananas a year.  Don’t we all look so cute together?  “Bob loves it there!”  Me too. 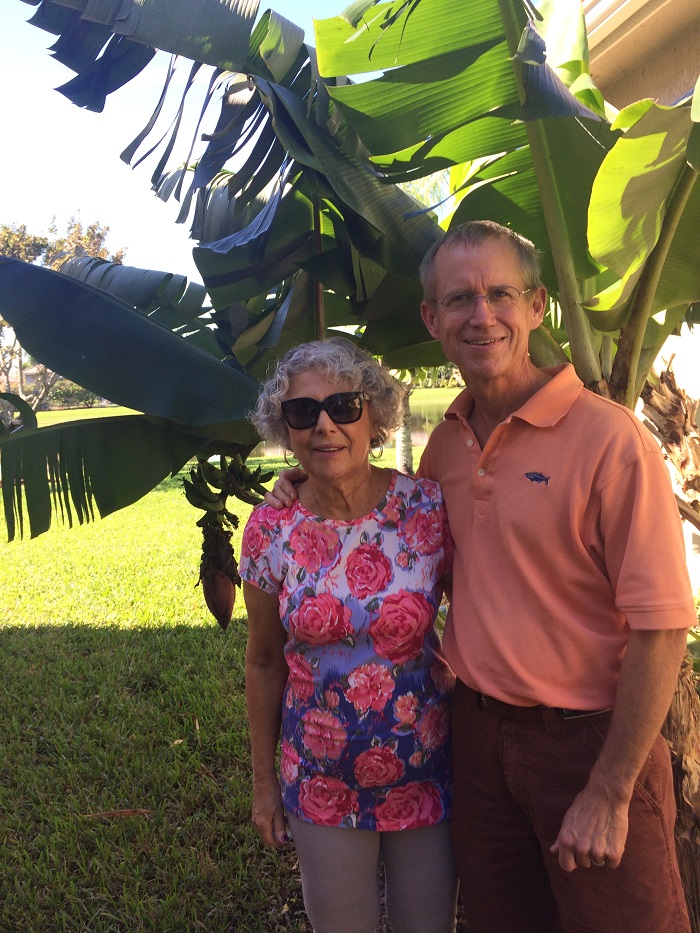 So, for the next few days Brenda and I will finish up last minute details and I’ll try to figure out exactly what else Uncle Sam wants to be sure all is in order for our visit to Cuba and perhaps more importantly, our return to the U.S.  I guess I had better sign off or we won’t be ready by the weekend “window”, if it arrives after all.

Signing off from Sunny Florida for now and enjoying a day that actually is as advertised.

One response to “Heading out, but when?”