It’s Saturday morning here in Ft Lauderdale and it is shaping up to be a really nice day.  That’s particularly good news as the weather has there hasn’t been much sun here since we arrived in FL in late December.  It’s been very cloudy and rainy with temperatures lower than you’d expect for “sunny Florida”.   And no, I don’t expect any sympathy from my “buds” up north who are experiencing a “real” winter.   However, you can take some solace in knowing that while you were snoozing all warm and snug in your bed the other night, I was out in the cockpit for hours on anchor watch lest we drag in the squalls and strong winds that roared through the anchorage at “0-dark-30”.

Anyway, today is a beautiful day and makes up for all the rain that kept us cooped up on Pandora yesterday.  This is the view that greeted me today as the sun rose over Ft Lauderdale.  Beautiful.  What a difference a day makes. 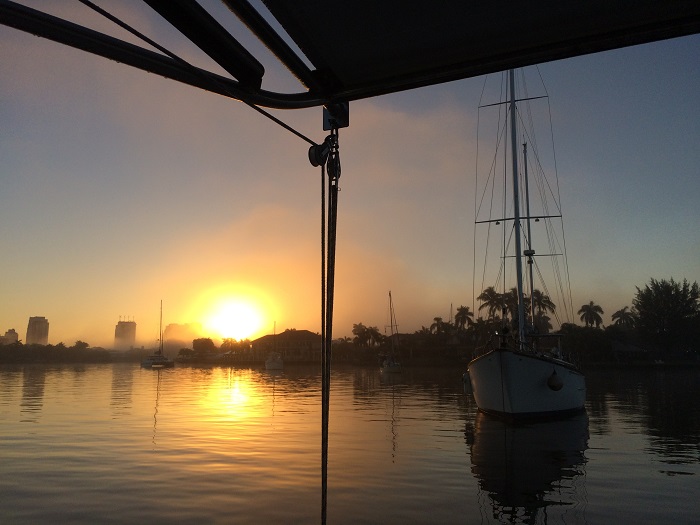 Rain or not, yesterday was a big day as it was Brenda’s “real” birthday and the culmination of the “celebratory period” that began back in November when I threw a party dubbed as “Brenda’s not even close to 60 years old, birthday party”.   We had to begin celebrating early as I wanted to be sure that she’d enjoy her special day with old friends, well not really that old, while we were still in CT, knowing that we’d be aboard Pandora on her “real” birthday.   It is worth mentioning that she shares that day each year with Martin Luther King, as well as the national holiday that is held in their honor.

As we watched the weather forecast for the week we also saw that her “real birthday, day”, yesterday, was likely to be rainy, and it sure was, so we celebrated ashore for “happy hour” a few days ago.    This photo is supposed to document that we are more “hip” than old with the stage lighting pulsing in the background.  Not sure that the photo offers definitive proof of “hipness”.  I guess you will have to be the judge.  Never the less, it was a lot of fun and there were plenty in the bar that were even less hip than we.  Well, I cling to that belief.  I won’t mention that it wasn’t even dark out when we arrived.  Pretty pathetic.    Question: What did we do before we had “selfies”.  Hmm… 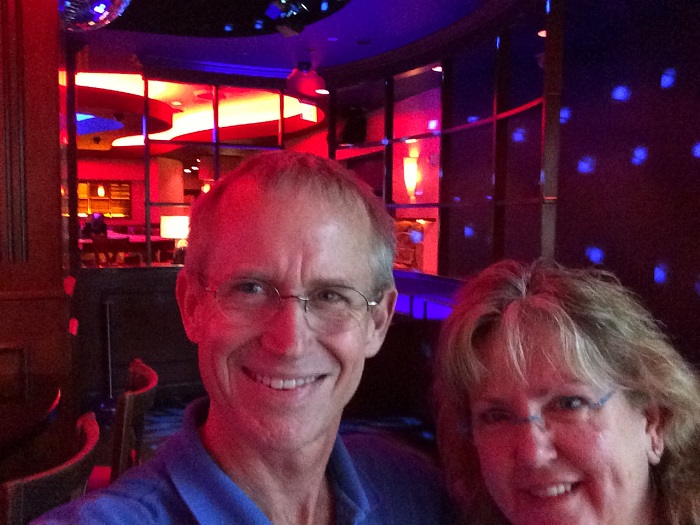 So, yesterday was the “it” and Brenda enjoyed a quiet day aboard while the wind whipped us and everyone else around the anchorage.  However, due to my excellent advance planning, I was ready.  Well, almost ready, as I didn’t have any ribbon to tie up her present.  Not to be deterred, I found some “designer cording” and a “natural fiber decoration” plucked fresh from a local shrub.    How many cruising boats have a supply of wrapping paper and tape on hand?  Like most everything aboard a cruising boat, one needs to improvise. 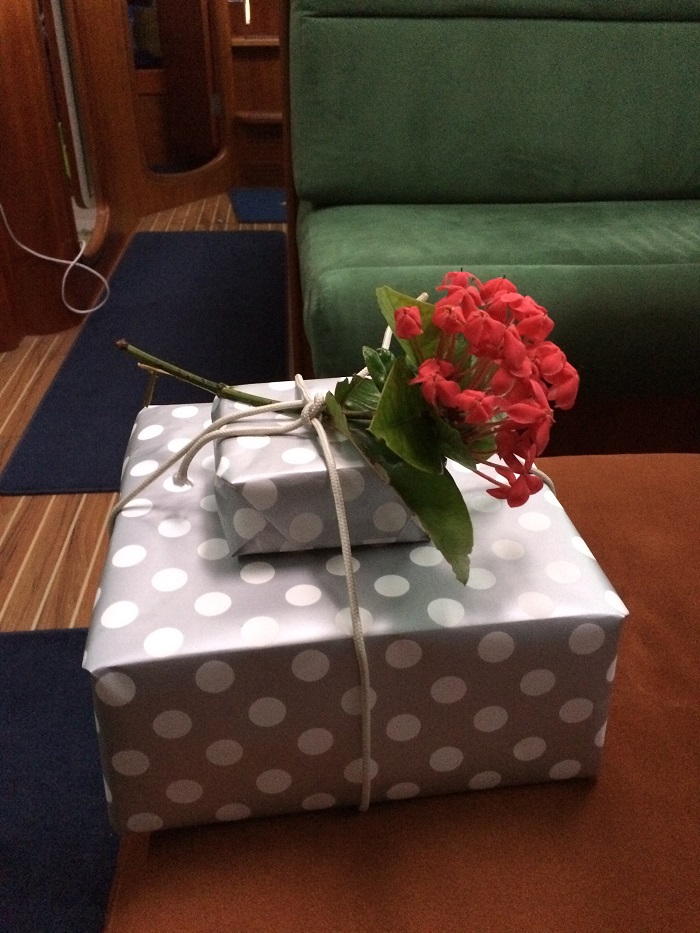 Another big event yesterday was receiving the “final final” approval from the Commerce Department that included the definitive “you go Bob” notice that givs us approval to visit Cuba aboard Pandora.   It was a long time coming as I began exploring the process of visiting Cuba back in early summer with a call to my congressman’s office to learn what the process for visiting Cuba looked like.   Well, here we are in mid-January and it finally came.   I won’t bore you with all the details but it was a long and involved process.   I have to say that, as I downloaded the approval document today, I was a little disappointed that it wasn’t accompanied by a “trill of brass horns” as I opened it on my screen.  However, everything is now in place.  Amazing, actually.

I say that everything is “in-place” but we still have plenty of provisioning to finish up with and one of Brenda’s prescriptions was wrong from Express-Scripps and getting that corrected will take a few more days, at least.  Getting three months’ extra supply of medications is no simple feat and getting it right, and sent to the correct address, well that’s nearly impossible.  Did you know that when you use a UPS store as a drop point, it costs $5 per day per package once it has arrived.  Yikes.  When I visited them yesterday I was presented with a bill for $185 as some packages had been there for a while.   Fortunately, they took pity on me and I ended up paying somewhat less.  I won’t make that mistake again.

This morning I listened to Chris Parker, the weather router, and there may be a window to cross over to the Bahamas on Wednesday and if that doesn’t happen, we might be another week till the forecasted strong cold fronts have passed and another window presents itself.   The prevailing winds are from the east, as are the Bahamas, so getting there can be tough.  For every day that’s good for “easting”, there are many more that are unfavorable.  I won’t go into details on that except to say that making the run across the Gulf Stream can be tough and “tough” doesn’t play well with Brenda, self-described “creampuff” that she is.   Actually, she’s a lot tougher than she lets on but I had better not push it as there’s a lot of water to be crossed until we get to Cuba.

For now, I’ll focus on getting ready to go so if we get the go-ahead from Chris in a few days, we’ll be ready.

It’s hard to believe that we finally have our approvals in order to visit Cuba, a country that has been off-limits to U.S. citizens for as long as I have been alive.   It’s safe to say that when we first thought about making this trip, I never thought it would actually happen and now it is.  I guess that there’s nothing as consistent as change and changing it is.

So, that’s my report.

3 responses to “Cuba bound. Who knew?”