Under way sort of, finally. Getting excited.

It’s Saturday morning and Pandora is secure at the Ft Pierce City Marina in, you guessed it, Ft Pierce FL.  We decided to splurge and tie up in a marina for a night because there is a farmer’s market and craft show each Saturday adjacent to the marina.  The city has invested heavily in the waterfront and it’s very nice.

Another, no make that the main, reason that we decided to visit though was because Brenda had learned about another weaver that lives aboard a boat here in Ft Pierce.  And, let me tell you, Brenda has happened upon VERY FEW weavers aboard boats over the years and this one wasn’t to be missed.   The couple, Laura and Bill, live aboard a powerboat for a few months in the winter and in Beaufort SC in the summer.   And, as an added benefit, they aren’t ever OLD.  Well, they aren’t as old as me and Brenda.   However, they live on a powerboat but hey, she’s a weaver, so we won’t hold it against them.

Laura and Bill visited us aboard Pandora last evening.   Here’s Brenda and her  new kindred sole, Laura.  These girls have a remarkable number of things in common, including a fetish for purses.  Hmm… 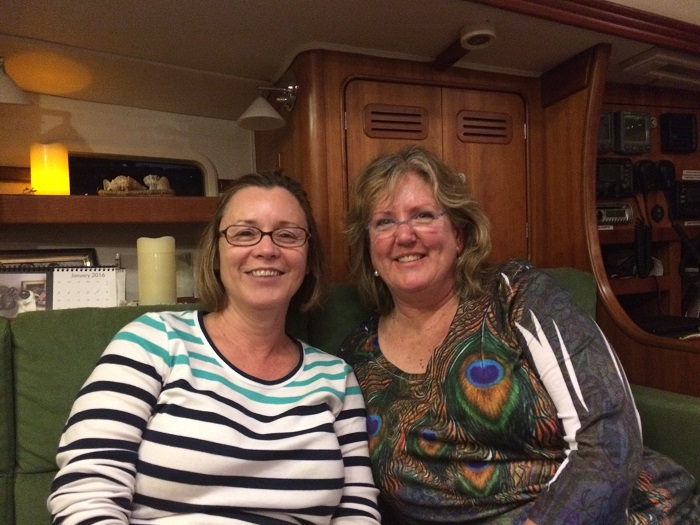 Speaking of fetishes, not that one you sicko, Brenda is also very fond of jewelry and she found, in Ft Pierce, perhaps the Holy Grail of jewelry stores, one named after her.  How perfect. Even more perfect, it was closed.  Yipee! 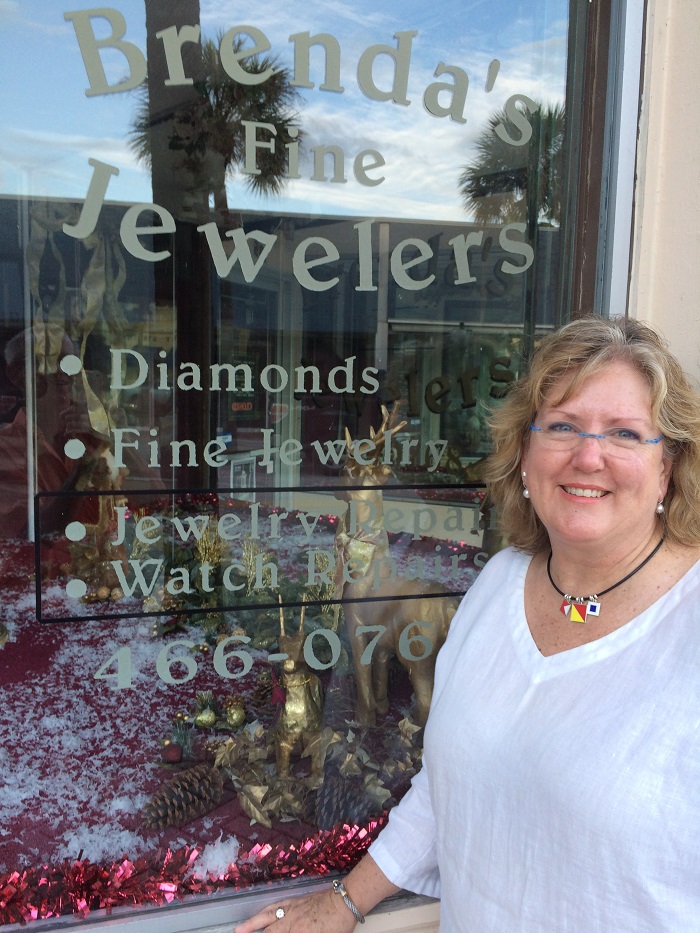 Speaking of spending boat dollars.   Somehow Pandora’s bow pulpit was bent to the side by about 4-6″ and I don’t know how it happened.  One way or the other I had to have it fixed so Brenda and I headed back to Riverside Marina and the gang pulled and pushed to get the pulpit back in shape.  They used very heavy straps, a fork lift and plenty of elbow grease to make it right.  Here’s George hard at work setting the straps in place. George was one of the guys that put on Pandora’s davits earlier this year.  Nice guy.  He knows how to apply a proper amount of “English” to the job and pull everything into alignment. 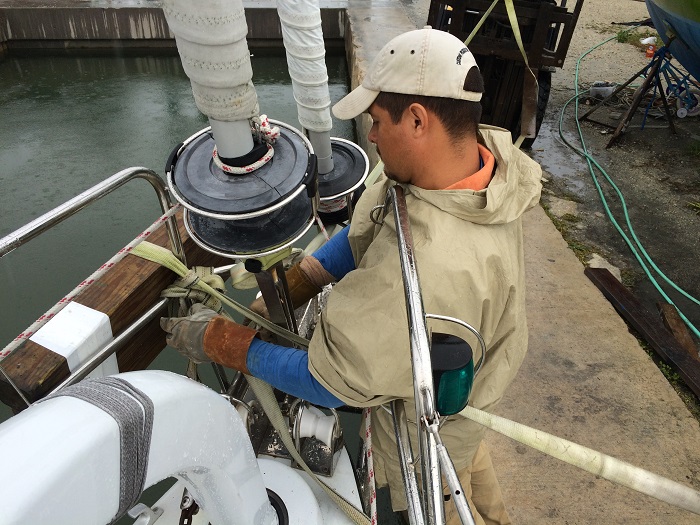 They used quite a mix of straps, wood blocks and chains to secure everything and keep it moving in the right direction.   They did a remarkable job and the bill was only a fraction of a “boat dollar”.    Well done.  I was in and out within a few hours. 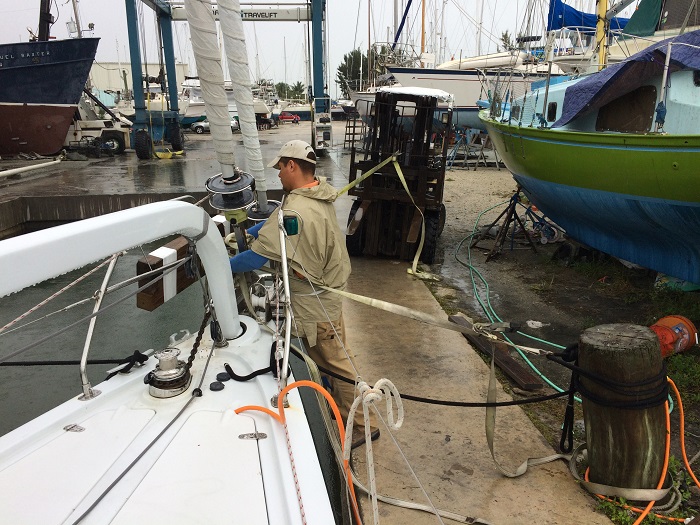 I hope that it’s our last visit to a yard for an “adjustment” on this trip.  Today we plan on visiting the market and will leave after lunch to either head down the ICW toward Ft Lauderdale or anchor near the Ft Pierce inlet and wait to sail on the outside down to Lake Worth.  I’ll have to check the weather files later to see which makes sense.  I don’t want Brenda’s first run of the season to be a “non-starter”.

One more thing before I break.  You may recall a post that I did a while back about my “encounter” with the USS New Mexico off of New London CT.   Well, I have continued to be in touch with Damon, in New Mexico, that manages the boat’s site and he sent me a very nice note the other day.  I just have to share it here.    Damon was referring to the day this summer when I helped my friend Ken and his family spread the ashes of their parents on the waters of Long Island Sound.

Damon wrote:  You blog is wonderful and full of joy and friends.  Congrats to your son and new daughter-in-law.  One amazing story you might find interesting is that the USS NEW MEXICO did the exact same favor for us as you did for your friend Ken.  One of our long-time Committee members, Leo Davis, a Navy torpedoman that completed seven combat patrols during World War II, died in August 2013 at age 91.  With eager permission from the Navy, I accompanied his two sons, who carried his cremains, to Groton in September 2013, where Leo was piped aboard the submarine with full honors, and his ashes remained onboard until March of 2014.  It was at that time, during a scheduled Arctic deployment, known as ICEX-14, that the Commanding Officer and several crewmen piped Leo ashore for the final time, launching a container with his cremains out Torpedo Tube #1 at the North Pole.  Leo in on eternal patrol at the Top of the World.  His last wish was to be buried at sea, and we were able to fulfill that wish in a manner that may be a once in a lifetime event.

I was very touched to read Damon’s comment.  I also take comfort in knowing that I have friends that have friends that own cruise missiles if Fidel gives me any crap when we are visiting Cuba.  HaHa!  Boy, I sure hope he doesn’t read my blog. Not likely.

Well, it is sure great to be underway again and there will surely be plenty more to come so stay tuned.    I am excited!

Oh yeah, one more thing.  Don’t forget to check out “Where is the world is Pandora” tab on the home page to see where we are each day of our journey.   We hope you follow along.   And, sign up too so you’ll get a note when I post.

2 responses to “Under way sort of, finally. Getting excited.”