Do your laundry. Learn about Cuba from Kiwis

It’s Thursday morning and today looks like the day, after a week here, that we will be peeling ourselves  away from “Velcro Beach”, that’s Vero Beach to landlubbers and even “CLODS”, Cruisers Living on Dirt, to head further south.  Along the way  we will have to make a quick stop to have few more things done to Pandora however, just about everything is shipshape now, which is good.   I am particularly excited about exercising my now-up-to-good-RPM engine which is working so much better now that it’s been properly tuned.

Yesterday, dancing between the raindrops, I decided to do laundry and headed with a massive load into the marina.  Yes, it’s been raining nearly every day since we got here a week ago and I have to say that it’s getting a bit old.  At least we can take comfort in the fact that its not snow.  When I check the weather each day there is always at least a 20% chance of rain in the forecast  and that often seems to morph into a 100% as the heavens open up in the afternoon.

I can just see the weather guy sitting in his office pouring over weather data and proclaiming “20%” only to glance out the window to see that it’s now raining cats and dogs and then scrambling for his computer to change the forecast.  Yup, 100%.  What a great job when you almost never have to be right and don’t get fired.

Of course, that means my 600 watts of solar panels don’t do a whole lot  on rainy days and I am sure glad to have my little portable Honda generator to top things up and heat hot water for showers.   Key point:  Brenda doesn’t like cold showers but then you probably already knew that.

Anyway, as I stood around watching the washing machine rattle and spin, I overheard a “doing her own laundry lady” talking about the “wonderful cruising on Cuba’s south coast”.   In spite of my pathological shyness, I jumped right in to ask questions.  It turns out that Jules is here in the US from New Zealand with her husband Gary and live aboard their 38′ Ingrid Ketch.  They cruised extensively throughout Cuba’s south coast this past summer.  Perfect, just what I was looking for!

Of course, I immediately asked her if she and Gary could come to Pandora for a drink so that we could talk about their visits to Cuba.  We have so many questions.  I also had it in the back of my mind (actually right in front) that perhaps they could speak about their experiences at the SSCA Gam that I am planning for June in Essex if perhaps they found themselves in the area.    Good news… They might very well be there as their travel plans probably include New England this summer. Fingers crossed.

So, Jules and Gary came to Pandora last night and patiently spent 2  1/2 hours telling us all sorts of great info about their visit.  I’d love to give you a detailed blow by blow of what they had to say but I don’t think that you could wade through that much “Cuba stuff” so let’s just agree that it was fascinating.

Ok, ok…. Just a few things that they mentioned…

I had recently learned that, as Americans, we would only be granted a 30 day Visa when we checked into Cuba and would have to leave the country for at least 24 hours prior to clearing back in.   The option that they suggested was to go to either Jamaica or the Caiman Islands, each an overnight sail from Cuba.   We would check in there, stay for a few days, and then return to Cuba, get a new visa and continue our trip.   Makes sense.

They went on and on about how wonderful and welcoming the Cuban people are and how great it is to visit the more rural towns and cities along the way.  They did not spend much time in Havana because the other areas were just to wonderful and worth exploring to cut things short.  They did suggest that we leave Pandora for several days and travel inland to stay in some of the many small inns that dot the countryside.

Another question I had been fretting over is about staying in marinas  as when traveling through Cuba by boat, you are required to go from marina to marina. At each port, departures and arrivals must be cleared with the Guarda Frontera, the Cuban Coast Guard.  It is illegal to just stop along the way and go ashore.

Brenda and I much prefer to be anchored out away from bugs, both flying and crawling and the idea of tying up at marinas that are often described as rough and in great need of repair is a total non-starter for us.  I had read that, with the permission of the Guarda Frontera, you could anchor in many harbors for a small fee, usually about $.25/ft per night but only if the marina was full.  Not so, it seems, as Gary and Jules cruised the coast for many months and almost never tied up in a marina.  Brenda and I were relieved to hear that.

They patiently went through our three chart books and marked them up with points of interest and even included the names of people who could help us along the way.

We wish that Gary and Jules could have stayed longer and we are hopeful that they will come see us this spring when we return to CT as Gary has some work planned in New England this summer so being at our Gam might work out for them.  That would be terrific and as an added bonus, their NZ accents will add an exotic touch to the event.

They maintain a blog and posted when they visited Cuba last summer.   Check it out,it’s worth reading.   Our visit was just terrific and helped fill in a lot of blanks about Cuba for us.  And, if that’s not enough, perhaps I have found another important piece of the puzzle as I look for speakers for our  SSCA Summer Solstice Gam in Essex next June.  Heck, that would make them a “toofer” and that’s even better. 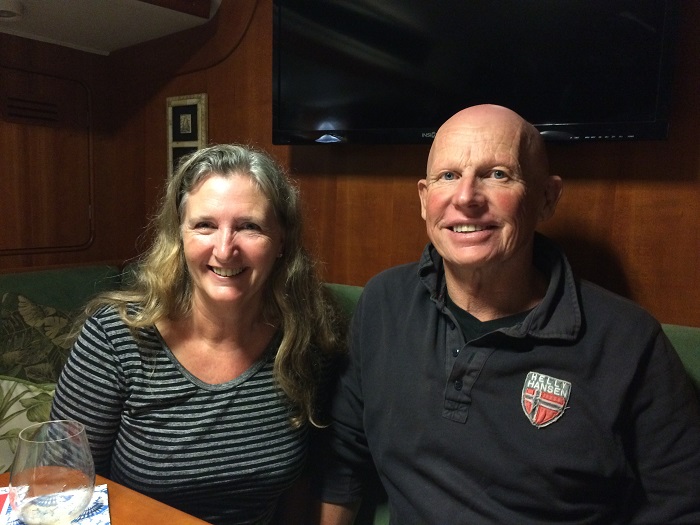 We were so focused on Cuba that we didn’t have much time to get to know more about the two of them but we did learn that Gary is a professional sailor with some America’s Cup campaigns under his belt.  Perhaps he will enjoy meeting Tom Whidden,  a member of the America’s Cup Hall of Fame, at the Essex Yacht Club.  Tom is our Commodore and will be speaking at our gam about the current Cup races.

It is an amazingly small world, isn’t it?    Yes, and I LOVE doing laundry.

One response to “Do your laundry. Learn about Cuba from Kiwis”