If we go, we’ll know where we are.

It’s Saturday afternoon and only two days are left until we close up the house to head south for the winter.  Of course, along the way, Brenda and I will spend time with our sons and new daughter-in-law in Baltimore but after Christmas we’ll jump on a plane and head to Florida to re-board Pandora.

I have been writing a lot about our “plan” to go to Cuba and I still don’t have a definite “you go Bob!” from Uncle Sam.   It is looking pretty good as we are already “partially good to go” having heard back from the folks at OFAC, the Office of Foreign Asset Control.   What I mean by “partially” is that I was told by someone from that office a few days ago that “as long as you feel that your travels to Cuba fall under one of the twelve categories of travel that are legal, than you can go and stay as long as you need to”.  What I really wanted was something in writing but was told “that’s not the way we do it”.  As hard as I tried and as many times as I reworded my questions, I could not get a definitive answer confirming that we could go.   It seems that the best anyone can get is confirmation that “you are fine and as long as you feel…”.    I guess that will have to be good enough.

Wouldn’t it be great if the IRS operated that way.  “Well sure Mr Osborn, if you feel that it’s ok not to pay taxes, we are ok with that.   Of course, that’s as long as you are really sure…”

So, I guess Brenda and I can go and the writing that we do in our blogs, the articles we write for other publications, along with the talks we give put us solidly within the journalism category.

Now all that’s left is approval regarding our Commerce Department SNAP-R application, a license to export Pandora to Cuba and re-import her when we return.  This is the same form that you’d use if you wanted to take a ship load of grain into Cuba or if you wanted to bring in materials to build some tennis courts in Havana, something that a friend of mine is working on. Yes, it seems that Cuba has tennis courts or will have them soon, assuming that my friend gets his SNAP-R application approved.

My contact at the Commerce Department, who’s been handing my application, told me that he thinks approval is pretty likely and that I should hear by December 30th.  That would be terrific and I am encouraged by his comments.

As Brenda and I will be leaving the US to head to the Bahamas in a few weeks, I have put off purchasing charts of Cuba with the thought that I didn’t want to spend a lot of money on charts etc for a trip to Cuba if we do not get approval. Well, time’s slipping by and while I don’t have confirmation yet, I am about out of time so I had to go ahead and order what I needed.

So, yesterday I ordered three of the four regional Cuba chart books that are published by a company, NV Charts out of Germany.  The only book that I didn’t purchase was the NE quadrant as we don’t plan on cruising that part of the coast and at $90 per region, I didn’t want to purchase what I didn’t need.   These charts are “hot off the press” as they finished up their final work in Cuba in February of this year.  That’s very encouraging as I am a bit anxious about having good quality navigation information for an area that hasn’t seen  many cruising boats for the last 50 years.

I have relied on my Garmin Blue Chart Mobile iPad charting application as a backup for my Raymarine plotter for several years now and when I installed the Cuba charts I discovered that the charts for Cuba are not very good.  While some areas seem pretty good, here’s a close up of the harbor near Havana where Marina Hemingway is located. From the perspective of the Yaching Community, it is arguably the most important harbor in Cuba so you’d think that Garmin’s charts would be excellent Right?  Not!  It’s pathetic actually and it makes me wonder about the rest of the charts for Cuba, even the ones with a lot of detail. 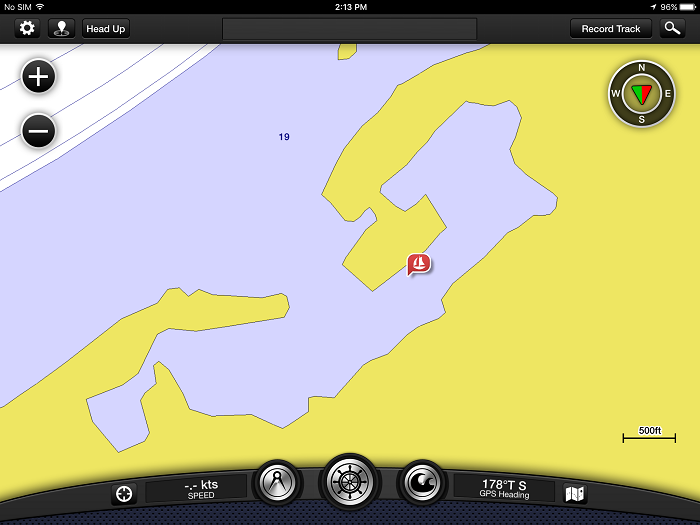 And, a larger scale view of Marina Hemingway from NV Charts, the ones I purchased yesterday.  Just a little different. 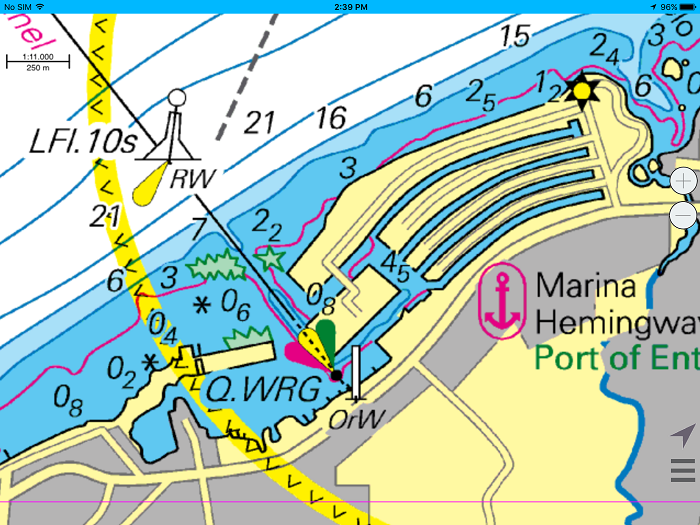 And, there is even more detail when you zoom in.  It even shows some deeper spots in the inner parts of the marina.  If it’s correct, that’s a high level of detail. 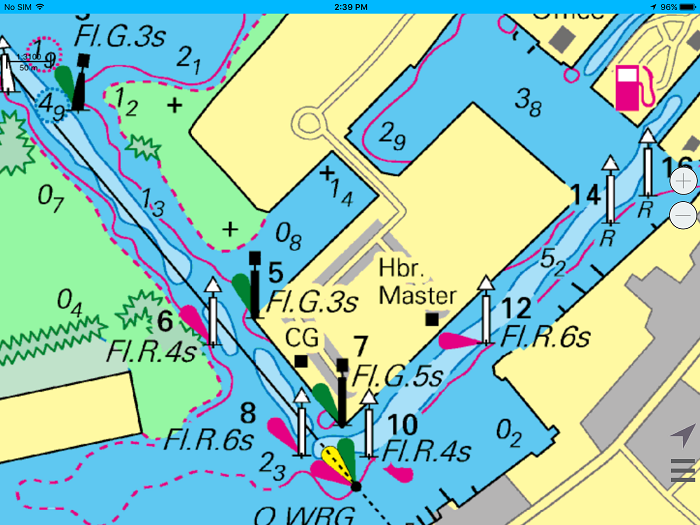 Here’s a shot of Havana harbor from another charting program that I paid for and downloaded off of iTunes.  Not a great confidence builder.  And, let’s not forget that Havana is the biggest port, by a lot, in Cuba. 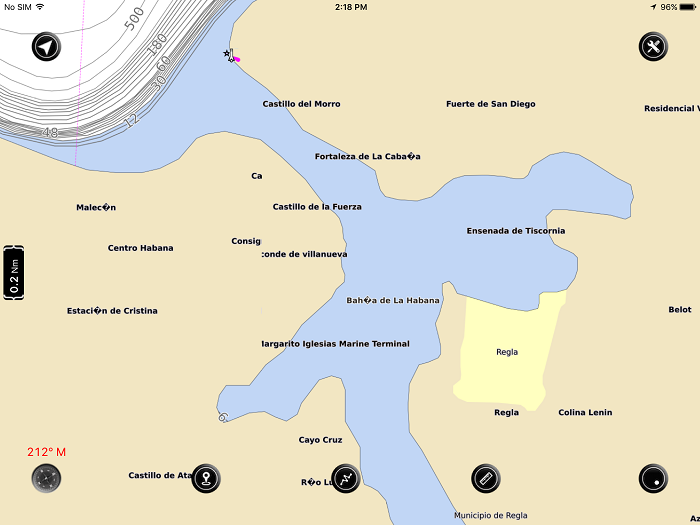 And, here is Havana harbor on NW Charts, iPad version.  It certainly gives me more confidence in the charts for other areas as well. 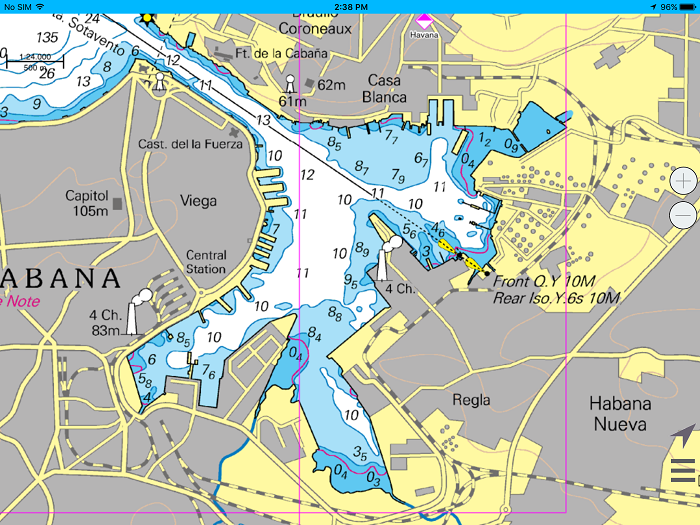 I have been told that my Raymarine charts of Cuba are fine but I have not looked at them yet as they are on Pandora and, well,  I’m not.  However, good charts or not, I do not feel comfortable being on board without backup paper charts.  I have a number of friends who’s boats have been struck by lightning which fried all of their electronics so where would they be if they didn’t have paper charts on board?

I don’t want to think about that and am pretty sure that Brenda would view such an event as a CLM (Career Limiting Move) something that I try hard to avoid at all costs.  I should note that being hit by lightening would be a Mega CLM from Brenda’s perspective so I am not sure paper charts would make up for that.  But, that’s another story…

Anyway, I purchased the paper chart books from NV Charts and had the books shipped to FL where Pandora is so I haven’t seen them yet.  However, with the limited amount of exploring of the electronic versions that I have done, I expect that they will prove to be quite acceptable.  I have read a number of reviews, seen some sample charts and am encouraged by what I have heard.   Each book includes electronic versions that can be used on various devices as well as my Raymarine plotter so that will give me great redundancy and solid paper backup in the event of equipment failure.

So, while we don’t yet know if we will get the “you go Bob!” but at least we will know where we are if we get there, Cuba that is.

Fingers crossed that we will know soon.  For now, I have to focus on winterizing the house.  Where did I leave those jugs of antifreeze?