It’s Tuesday afternoon and the first day for folks taking part in the Salty Dawg Rally to connect with one another as we all prepare to make our run offshore to the BVI in about a week.   There are plenty of boats that have not yet arrived here in Hampton yet but I would expect that many will begin coming into town in the next few days.  The marinas are full and Pandora is snug on the dock.  I have to say that it’s very convenient to have power, sort of unlimited (hot) water and all the comforts of home, albeit, without Brenda.  I even did a few loads of laundry in our washing machine.  Our own washer/dryer.  How decadent.

The good news is that Brenda will be visiting for a few days beginning Friday to meet some of the folks and participate in the activities (read: Parties).  This group knows how to have a good time and there is a cocktail party every night for the next week.  And, it’s BYOB, just my speed.

There are folks at all levels of experience participating in the rally although it’s pretty clear that this sort of voyaging is mostly done by those that are, shall we say, “mature”.   Me too, as much as that pains me to admit. “Bob, is that grey hair on your temples?”.  My mother calls it “dirty blond”. I’m going with that.   She also tells me that I’m big.  Hmm…

I did meet a young couple that are taking a year off from work to cruise for a year or so and it will be interesting to learn where they end up as their current plans take them to the Panama canal by March.  After that?  Who knows.

This came in my welcome bag. I  will proudly fly this SDR/Hampton burgee on the run south. 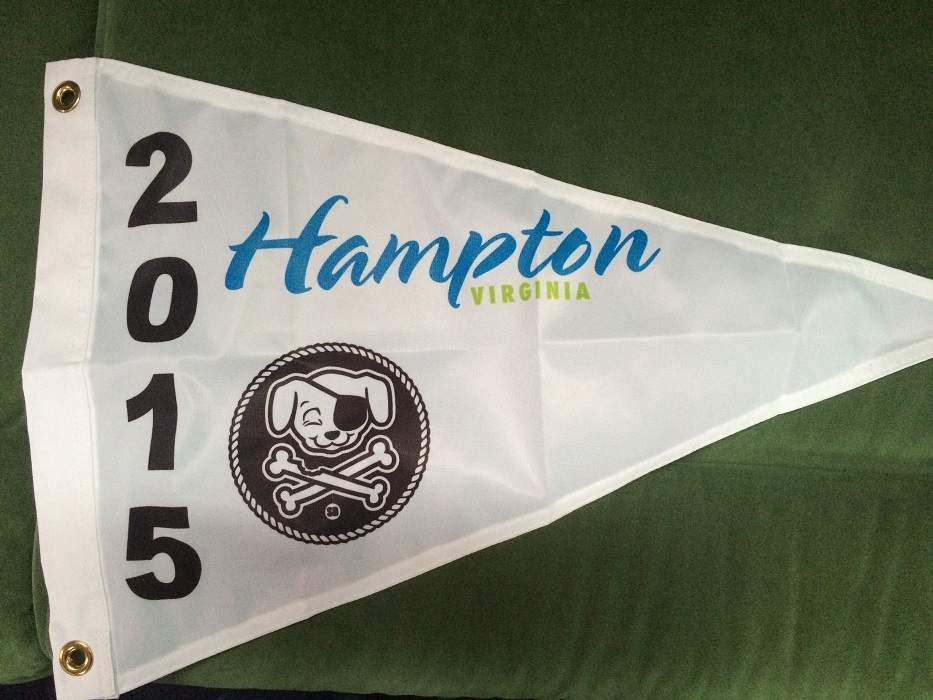 This isn’t the “real” SDR burgee.   I don’t have one of those yet as I haven’t actually joined the rally as a member, only as a participant.  Perhaps a subtle difference so I’ll have to learn more.

Our run from Deep River was uneventful with great sailing for the first half and then a motorboat ride after that.  As Chris Parker, the weather router, predicted, we did end up with head winds for the last 8 hours or so as the wind shifted to the south.  While NOAA was predicting much stronger winds to fill in, which they did, Chris was able to fine tune the forecast to let us know how much time we had till the headwinds got strong.   Good job Chris.

Many folks that were making the run from New England opted to stop in Cape May, something that we considered andI am glad that we didn’t as I heard on the SSB radio net that the harbor was just jammed with cruisers hiding from the weather.   Tight anchoring, short scope and strong winds make for a messy mix.

All and all, it was a good run, allowing us to cover the 350 miles or so in a bit over two days.    As we came within the last 10 miles of the mouth of the Chesapeake on Sunday we were greeted by a beautiful sunrise that was true to the adage, “red sky in the morning, sailor take warning”. 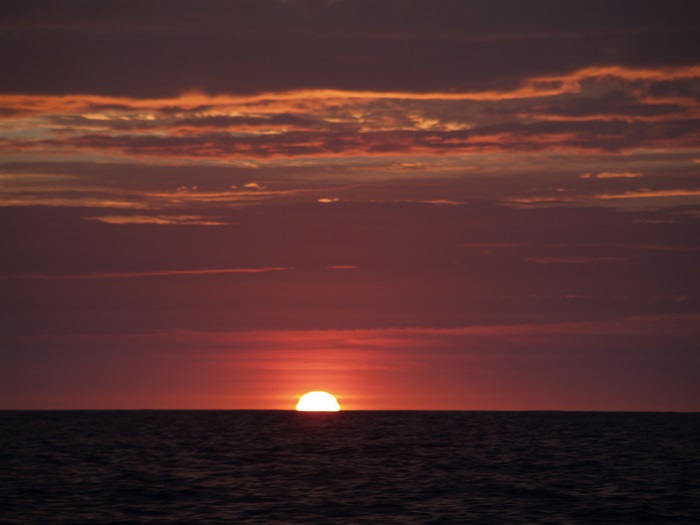 Glad that Chris was right with his forecast as that made the final part of our trip much easier.

As soon as we pulled into the marina, Gregg and Roger got to work up on deck getting Pandora all spiffed up while I worked down below.  Showers followed along with a nice dinner and a few well earned beers to celebrate our successful voyage.  The next morning, a nice crew shot on Pandora’s bow and off they went. 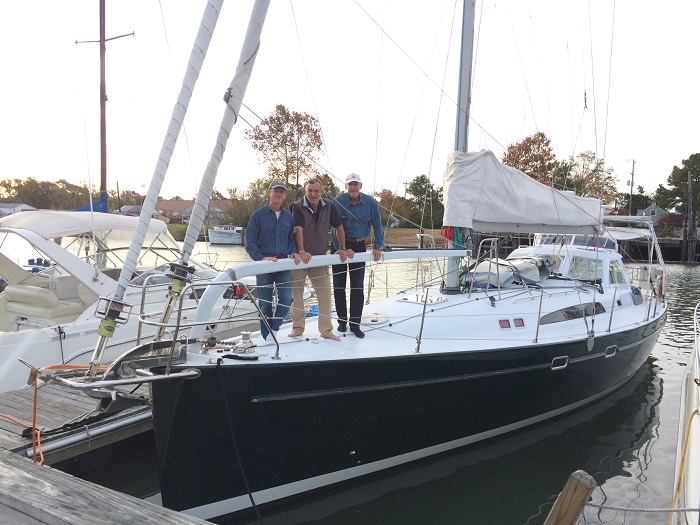 I enjoyed having them aboard but it was nice to havePandora back to myself.  As Brenda has often said, six for cocktails, four for dinner and two sleep over.   Not sure exactly how that applies to crew but cooking three meals a day and being responsible for the boat does tire one out, congenial crew or not.   They were certainly congenial and I appreciated their help in getting Pandora here.

So, with a good night sleep it was time to catch up on the projects that I didn’t get to prior to leaving CT.  One issue that I had debated was bringing my sewing machine with me.  It’s really robust and HEAVY.  However, in the end, I opted to toss it (carefully) below.  Really glad I did as on day one in Hampton I had a sewing project to attend to.  Pandora’s main is loose footed and has a heavy velcro covered strap that holds the clew securely against the boom as the out-haul moves in and out.  The material was badly sun damaged so I needed a new one.  Fortunately, my “stash” included 5′ of Velcro and after re-purposing a sail tie I made up a new strap.  Here’s my “sewing nook”.  Worked well. 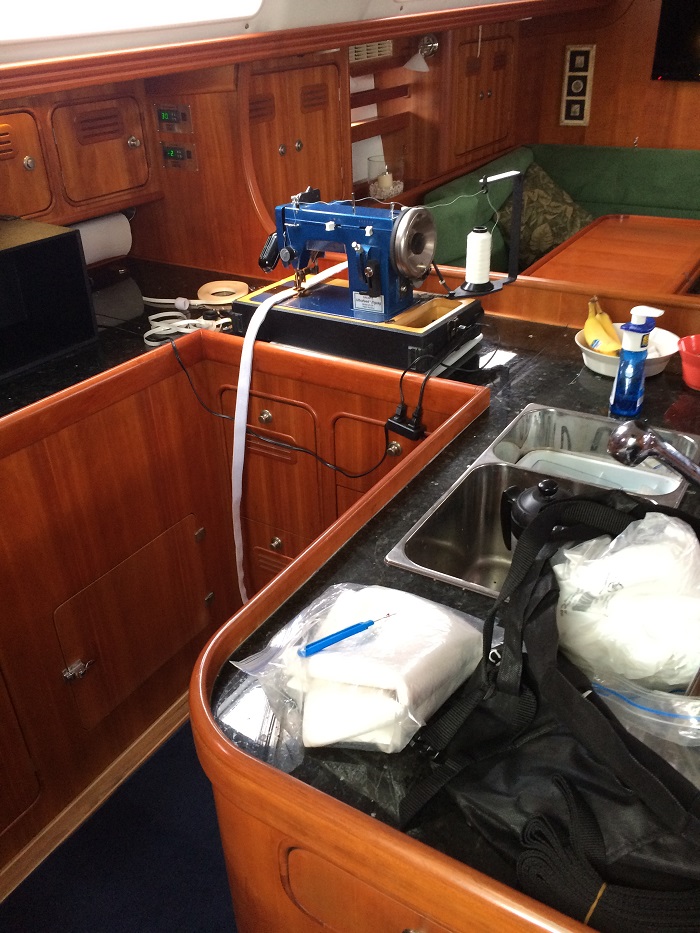 And the finished piece in place at the end of the boom. 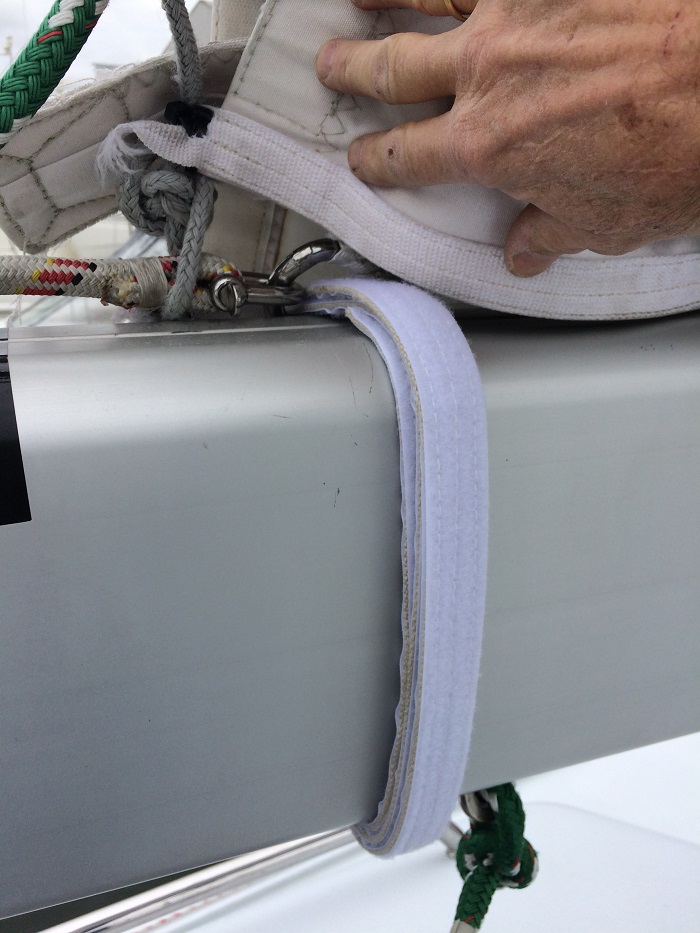 Very natty, if you can get excited about Velcro.  Absolutely!   It would have taken longer to find someone to sew this for me than it took to set up and do it myself.

A few weeks ago Brenda and I splurged and ordered custom area rugs for Pandora.   It was easier to have them shipped to VA so I was excited to pick them up at the marina office when I arrived.  They fit beautifully and do a nice job of bringing blue into a generally green boat.   There are a number of rugs that fit specific areas. 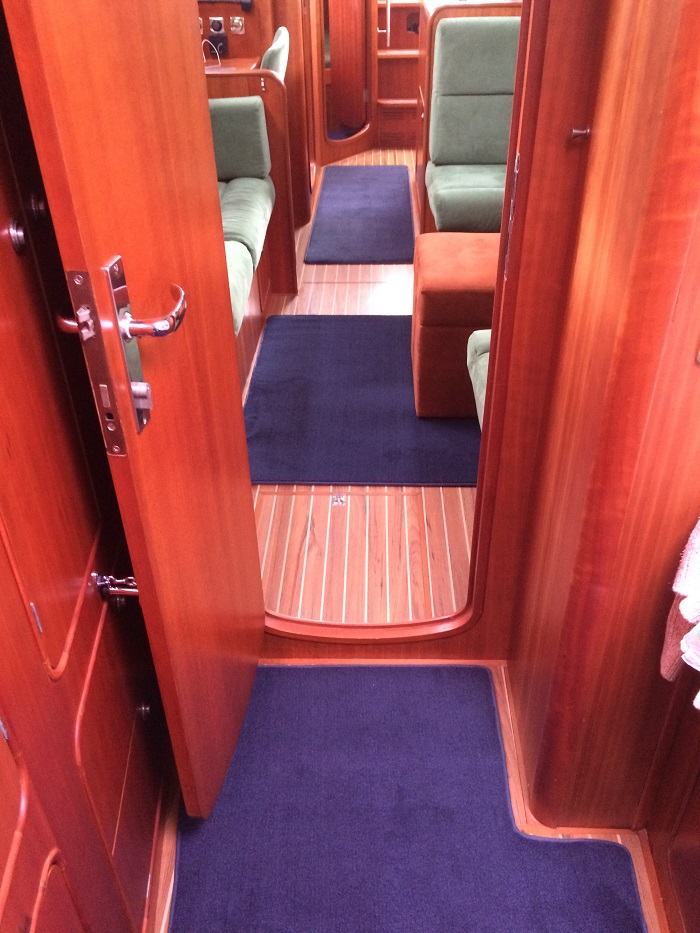 We also had one made up for the aft cabin. 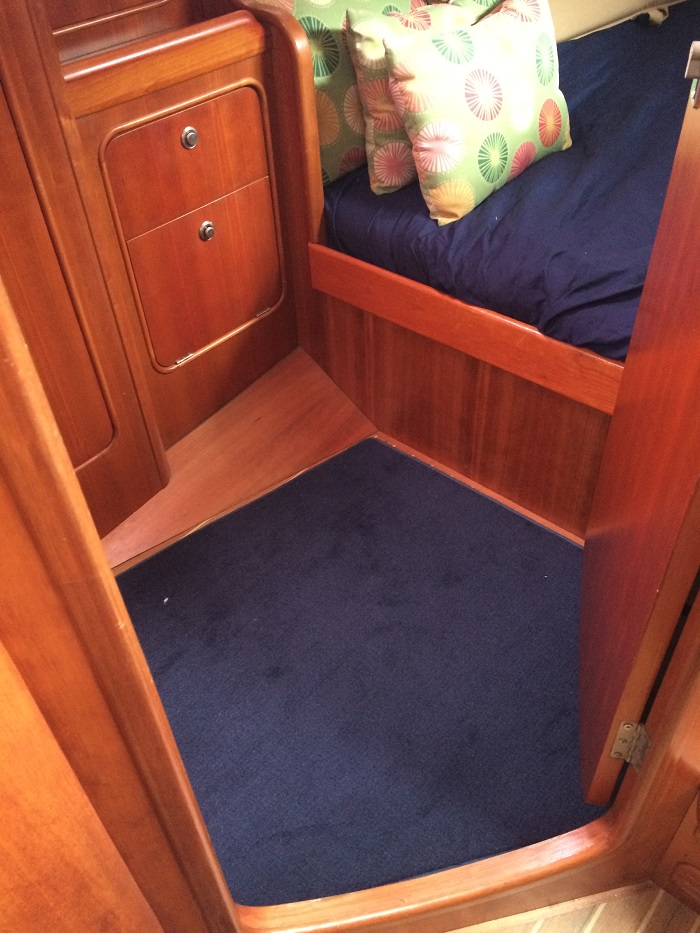 Brenda has made some wonderful pillows as accent in the main cabin.   The cost of having them made professionally was over $200 per pillow.  Granted, the fabric was luscious but that’s a very steep price.  I like what she made up yesterday and they cost WAY LESS.   Great job Brenda!!! 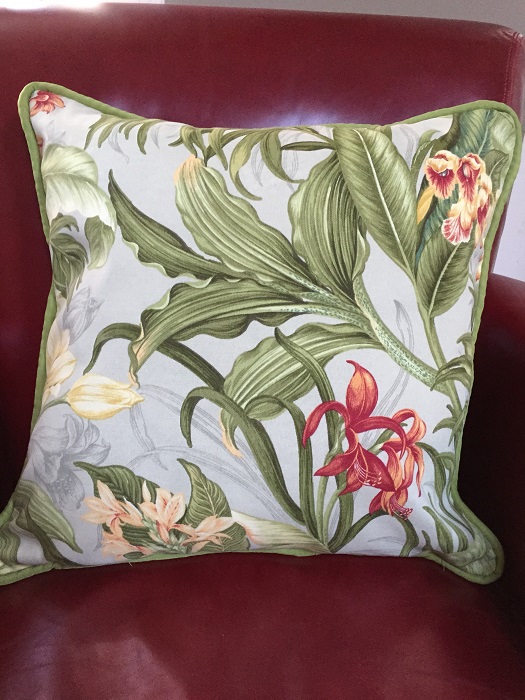 Well, the week is young but I can’t believe that I am perhaps a week away from leaving on my long run south.  Happily, most of the “issues” that I have had with a “new” boat are behind me so, unless something unexpected comes up, I won’t have to worry about anything more complex than changing the engine oil.  Fingers crossed.

However, that’s a new feeling for me as just a few weeks ago as I was struggling to get ready to begin heading south, this is more of the sort of image that came to mind.  “What, that is going to cost how many boat dollars?” 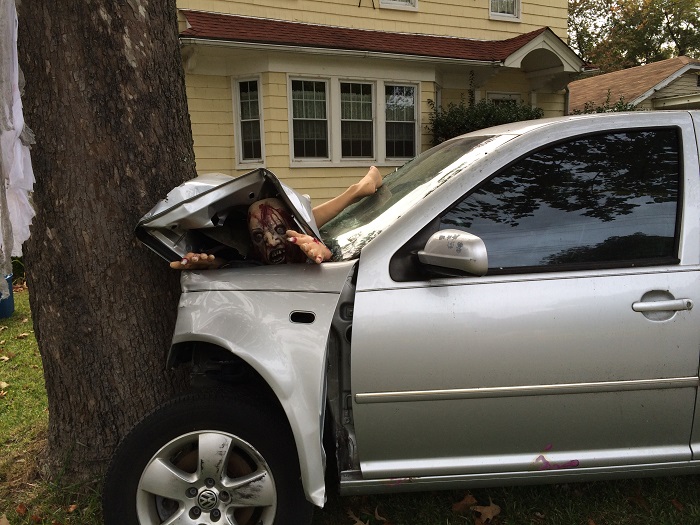 Today I visited a rally participant to help him set up his SSB e-mail.  He has only owned his boat for a few months and I am sure that he can relate to this image perfectly.  He told me that yesterday cost him plenty with a parade of “fixit guys” on and off the boat all day.  Unfortunately, some of the fixes didn’t take and with our departure about a week away, the pressure is mounting.   I can relate to that.

Editor note:  Yes, this is a real car in a nearby neighborhood that I saw when I was walking yesterday.  I am not absolutely certain that the “guy” is real.  Hard to say as  Saturday IS, after all, Halloween.