It’s Saturday morning and we have just passed Atlantic City on our way to Hampton VA.   When we left Deep River yesterday we plotted a course for Cape May on the chance that we would opt to stop there for a night while a small front passed through, bringing adverse winds for a day.  However, after speaking with Chris Parker today on the SSB radio, it seems that those winds, while they will be from the south and on our nose, won’t be particularly strong,likely 10kts or less,until later on Sunday.  So, provided that we can keep moving along in the 6-8kt range, as we are doing now, we should arrive in Hampton by mid-morning Sunday.

The trip has been quite good so far with really spectacular 20kt winds yesterday pushing us along at around 8-10kts on a beam reach for much of the day.  As the night progressed, the wind began to shift to the NE and then to the East as it is now getting lighter.  I don’t expect that we’ll be able to keep sailing for much longer and will have to use the motor again but it’s fun for now.
We did motor-sail much of last night with the wind directly behind me.  The jib wasn’t doing much and slammed around quite a bit.  I should have dealt with that as I found that the sheet had chafed quite a bit so I will have to replace the line. It’s a good thing that I have plenty of extra lines aboard to address chafe problems and am thankful that I brought more lines from home at the last minute before shoving off.  I believe that I have extras for just about every line aboard.   That’s comforting.   It’s amazing how much wear and tear there is on a boat when things get bumpy.

The temperatures overnight were plenty chilly and it was a chore to stand watch, even though we were under the cover of the hard dodger.  I stood watch from midnight to 04:00 and was quite happy to crawl into my sleeping bag and warm up at the end of my watch.  I slept like a “bowling ball”, you know, “toss it onto a bed, it rolls to the center and never moves an inch”.  That was me and I didn’t get up till nearly 07:30.

It’s a lot warmer today, which is very good news.  It’s also beautifully sunny with sea birds flying around us.  Speaking of birds, we had a small bird land on board last night around nightfall, something that seems to happen on nearly every ocean passage.   He hopped all around, even in the cockpit and I think that he stayed the night somewhere up forward, probably near the dink, which is lashed on the cabin top.  I always wonder what happens to these little birds when they need to stop and rest and there isn’t a boat nearby.  I expect that a lot just get exhausted and, well… you know.   They must be quite desperate to land in the cockpit with three “giants” gawking at them.

Today got off to a beautiful start as documented by Gregg.  I guess that he just instinctively knew that I love to post photos of sunrises.  I was listening to the weather at the time and he had the presence of mind to grab my camera and take a few shots.  Thanks Gregg. 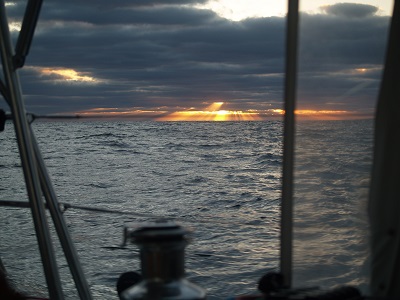 I guess that’s about it for now.  I’ll likely post again when we are heading into Hampton, hopefullytomorrow.
From the high seas… SV Pandora

3 responses to “First Night at Sea. Cold and Fast”