Out with the old and out (for a moment) with the new.

It’s been a busy week with a whirlwind trip from CT to New Bern and Oriental NC to prepare Pandora (the old one) for her survey and transfer to the new owner.

On Sunday,  VERY EARLY, I headed out to drive down to New Bern NC where Old Pandora had been docked at a broker’s office for the last five months since Brenda and I brought here there back in May in preparation to be sold.   The drive from CT was a long one and with a stop at a friend’s house along the way for lunch in Ocean City MD,  it took more than twelve hours.   It’s been years, perhaps never, since I drove for a dozen hours and I have to say that “I am too old for that”.

On Monday I cleaned the boat and moved her the 25 miles from New Bern to Oriental where she would be surveyed and hauled.   The survey took much of the day and fortunately went very well.  You never know what to expect in a survey, good care or not.  Besides, “you don’t know what you don’t know” and so often problems are crop up in a survey that were there an you didn’t even know about.

It’s been a long time since I have been in a boatyard to see a boat that I owned being hauled and not have to pay the bill myself.  Here’s Pandora being hauled for the last time in my presence. 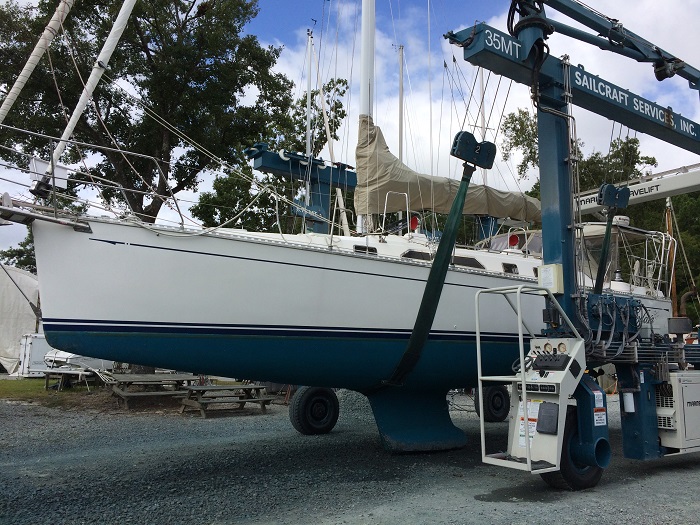 Part of the survey process is to take the boat out for a “sea trial” so that the buyer can get a feel for the boat under way and to see if all of the systems work as advertised.  That’s not a particularly big deal, as I have sailed her many thousands of miles, but I have to say that I was nervous as the wind was blowing nearly 30kts, well above the sort of wind that I’d classify as “fun”. Besides, it had been five months since I had done any sailing aboard “old” Pandora and I have to admit that I was a bit nervous knowing that much was on the line.  well, off we went, up with the sails and in with a double reef.  Still too much wind for my taste.

I was pretty sure that everything about the boat was fine but you never know what’s going to show up with a surveyor climbing over the boat for seven hours with a flashlight, peaking into every nook and cranny.  Fortunately, everything went well and she “passed the test”.

We took her back to the dock, the surveyor finished up his review of the boat and happily, the new owner accepted the boat.  Yahoo!  Amazingly, after months of having her on the market the buyer actually turned out to live nearby so all we had to do was to move her to a different marina in the same harbor as he and his wife live only about a 1/4 mile away.

I stayed a bit longer with the buyer to answer some more questions and then headed out to drive home.  The new owners, Dan and Leslie, plan on taking her south to the Bahamas in just a few years, which is good.  At least Pandora knows the way.

Well, the drive down was LONG but the drive back home on Tuesday afternoon, no make that Tuesday afternoon, Tuesday night and Wednesday morning, was even LOOOOOONGER.  I left Oriental at around 3:30pm and arrived home nearly twelve hours later with many quick stops along the way to “clear my head”.  I will say that the crowd that inhabits truck stops, in the wee hours, somehow seem different than the those you see on a Saturday afternoon in July.  Perhaps it’s the 1/2 gallon “sippy cups” of Red Bull.

Anyway, they say that the two happiest days in a boat owner’s life are when he buys a boat and when he sells her.  I’d say that’s true and sleeping aboard her for Sunday and Monday nights this week did bring back memories of the many years we owned her.  However, being the owner of not one but two vessels did temper the nostalgia a bit.

Well, it’s “out with the old” and I am back in CT now and ready to “get with the plan”, finishing up getting “new” Pandora ready for her run south.  There’s plenty left to do but I am getting there, bit by bit.  Hopefully, she’ll be back in the water next week with fresh bottom paint, all polished up and ready to travel.

What’s a blog post without two pictures of both my boats in slings at a boatyard. Here’s “new” Pandora in the slings when she was hauled recently.  She looks HUGE.   That’s me power-washing the bottom.  I look, well I don’t look so huge.  “Love the socks Bob, can you pull them up any higher?” 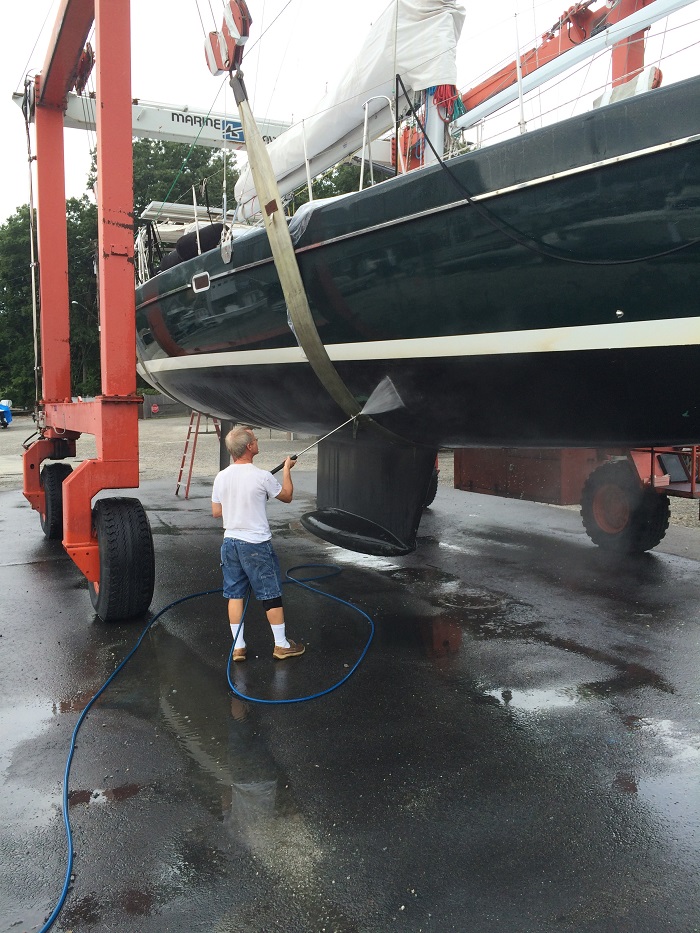 This keel is one of the reasons that she’s such a fast boat.  The fin is fiberglass reinforced with carbon and the bulb is lead.  That means that the weight, nearly half of the boat’s total, is concentrated way down low. 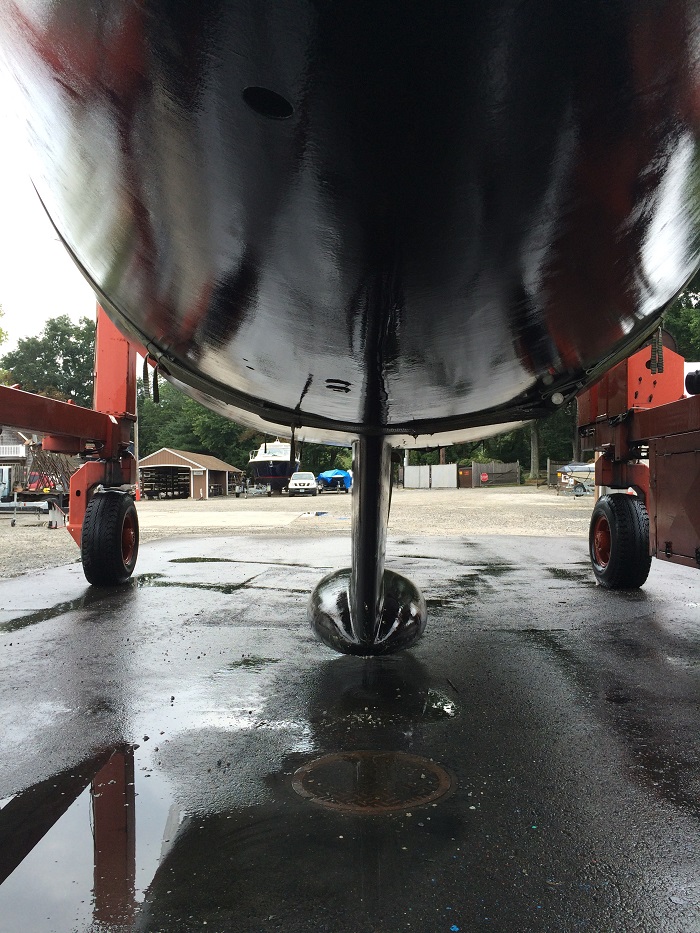 Yup, Pandora looks big when she is out of the water. 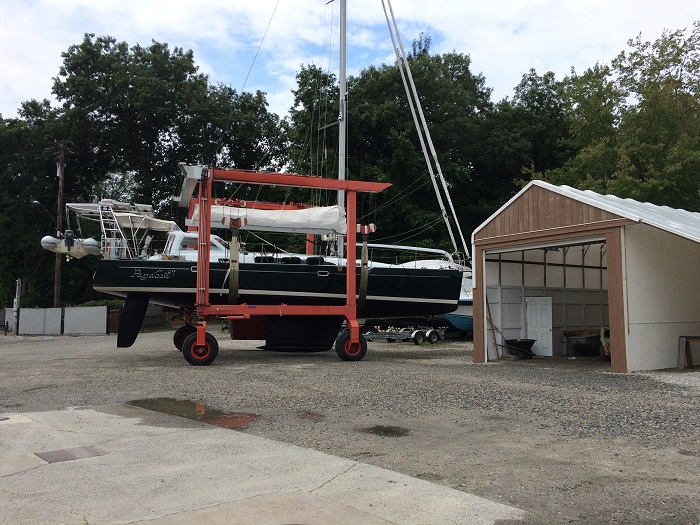 I replaced the prop with the Autoprop that the prior owner says “ate my transmission”.  I had the US distributor for Autoprop visit the boat and review the engine, transmission and prop and he thinks that I should be fine.  I sure hope that he’s right as the Caribbean is a very expensive place to do work that’s already expensive and, besides, I don’t want a new transmission.  I do like this prop and had one on “old” Pandora too. 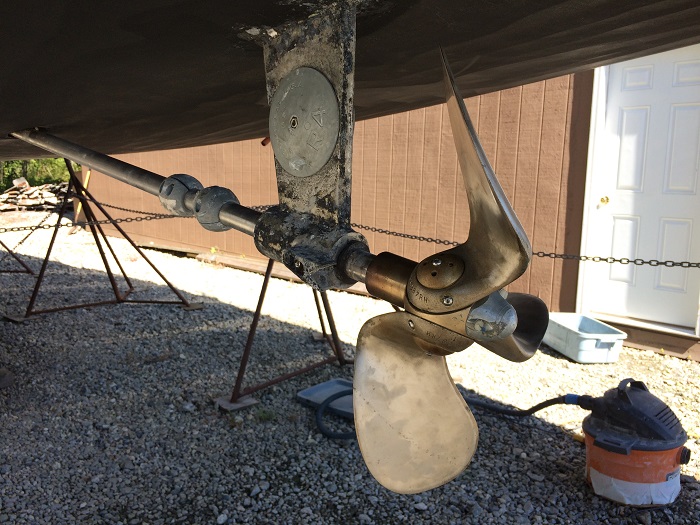 I also stretched out my 200′ of anchor chain and marked each 25′ section with red paint and some wire ties.  I don’t expect that the paint will hold up for all that long.  Shiny for now though. 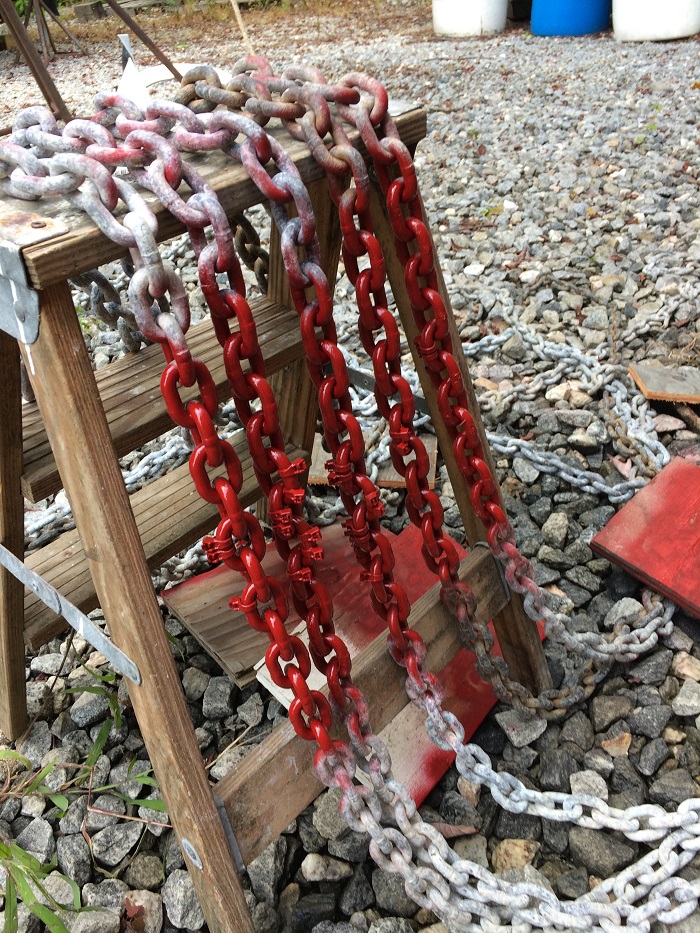 So, here we are, a “one boat” family again.  However, with the constant onslaught of projects, I do sometimes find myself wondering what it would be like not to have a boat and think about what would I do with all those “boat dollars”  Hmm….  No, never mind.  Besides, with all that nervous energy swirling around with nowhere to go, I expect that I would “burst into flame” and that wouldn’t be good, not good at all, especially for Brenda.

So, for now, it’s out with the old and well, out of the water with the new, the “new” Pandora that is.  Still lot’s to do but at least I am down to only one Pandora and that’s plenty.   Is that the sound of “boat dollars” being sucked out of my bank account I hear?  Well, at least the sound is a little less deafening, for the moment, until something else breaks…

2 responses to “Out with the old and out (for a moment) with the new.”