Cool boat sightings (revisited) and Pandora on the hard (soon)

It’s Wednesday morning and Pandora is in Deep River preparing to be hauled in a few days.  The run from Wickford last week was eventful, a combination of a wonderful sail and a chance encounter with the USS New Mexico.    I wrote a post about that moment, when she passed my bow off of New London.  If you missed it, you can click here to catch up.

I posted some photos on FaceBook and was amazed by the amount of response I got.  Some suggested that I had “sinned” by “blowing their cover” and had put the US Navy’s security at risk.  However, that turned out to be a bit of an overstatement as I put a note on the boat’s home page and within hours received an enthusiastic note from the Director of the Navy League in New Mexico thanking me for taking the photos and writing about the experience.  I was also thrilled that he wanted to use my photos on their site.  So much for the “cloak of secrecy” being blown.   I may even be able to find my way on board for a visit.  However, I won’t say that too loud as I may jinx it.  Mums the word.

Here’s what he had to say about my post.

I am the Chairman of the Navy League Committee here in Albuquerque, New Mexico, that supports activities surrounding the USS NEW MEXICO (SSN-779).  It is our committee that runs the website where you posted your email about seeing the USS NEW MEXICO return to New London.  I forwarded your email immediately to the Commanding Officer, CDR Todd Moore, and the Chief of the Boat, Master Chief Steven Fritzler.  Thank you so much for sharing your photos from your blog and for your note of appreciation for a job well done to the crew of the USS NEW MEXICO.  With your permission, I would like to post some of the pictures from your blog at our website, www.ussnewmexico.net .  Also, if you have any others that we could share, I would be glad to include those as well.  Just forward them and we will be sure to include credit for the origin of the photos.  We all loved your description at the chance meeting of a multi-billion dollar vessel at sea, and no matter who had the right of way, your sailboat needed to make way.

I look forward to hearing from you again, and checking out your blog from time to time for updates.  You included two of our favorite videos in your blog.

Well, as you can imagine, I was thrilled to get a response.   So, what do you do to top a photo of a sub taken while underway?  Not sure, perhaps I’ll someday have a chance to take a photo from on board a sub?  One can always dream.  How about a day sail?  Hmm…

I also recently wrote about a visit to the designer of Pandora Rodger Martin, and while I was there, at the Newport Shipyard, I spied an amazing cold molded sailboat and wrote about that too.   Well, Rodger, after reading that post, dropped me a note and mentioned that the boat, Foggy, was designed by Frers, styled by the famed architect Frank Ghery, famed designer of the Guggenheim museum in Spain. and built at Brooklin Boat Yard in Maine.  It seems that there was considerable secrecy surrounding the building of the yacht launched in July after two years of construction for an “unidentified client”.  You won’t find any information on Foggy on the yard’s site.   I did find a very interesting article about the yacht on www.panbo.com, and it was clear that the author was very excited about the yacht.   You can see the entire article here.  It is indeed a remarkable vessel.

With credit to Panbo,  here are a few photos of the boat rumored to be the personal yacht of Ghery himself.  It’s remarkable, to say the least. 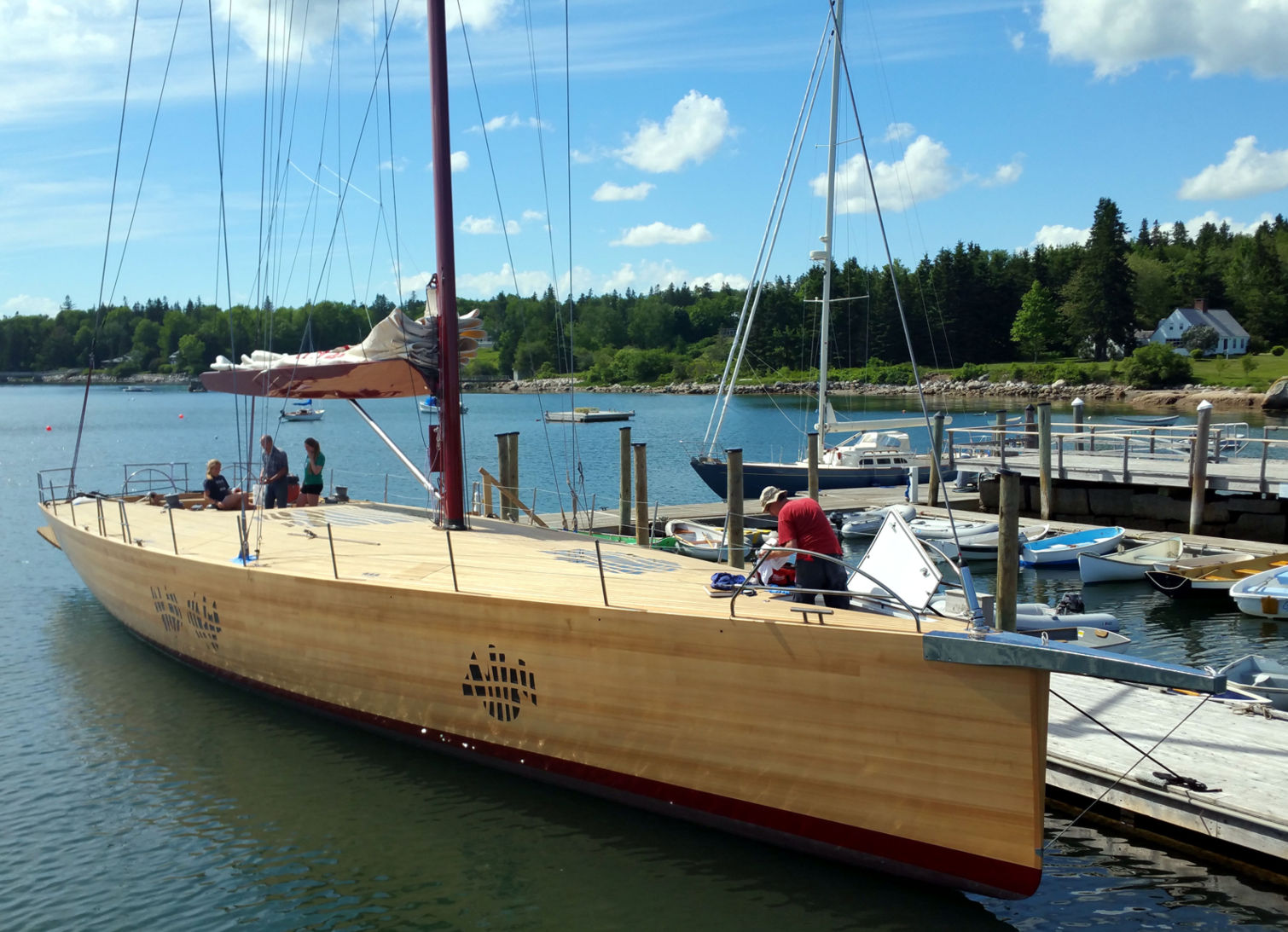 How about these sky lights and port holes? 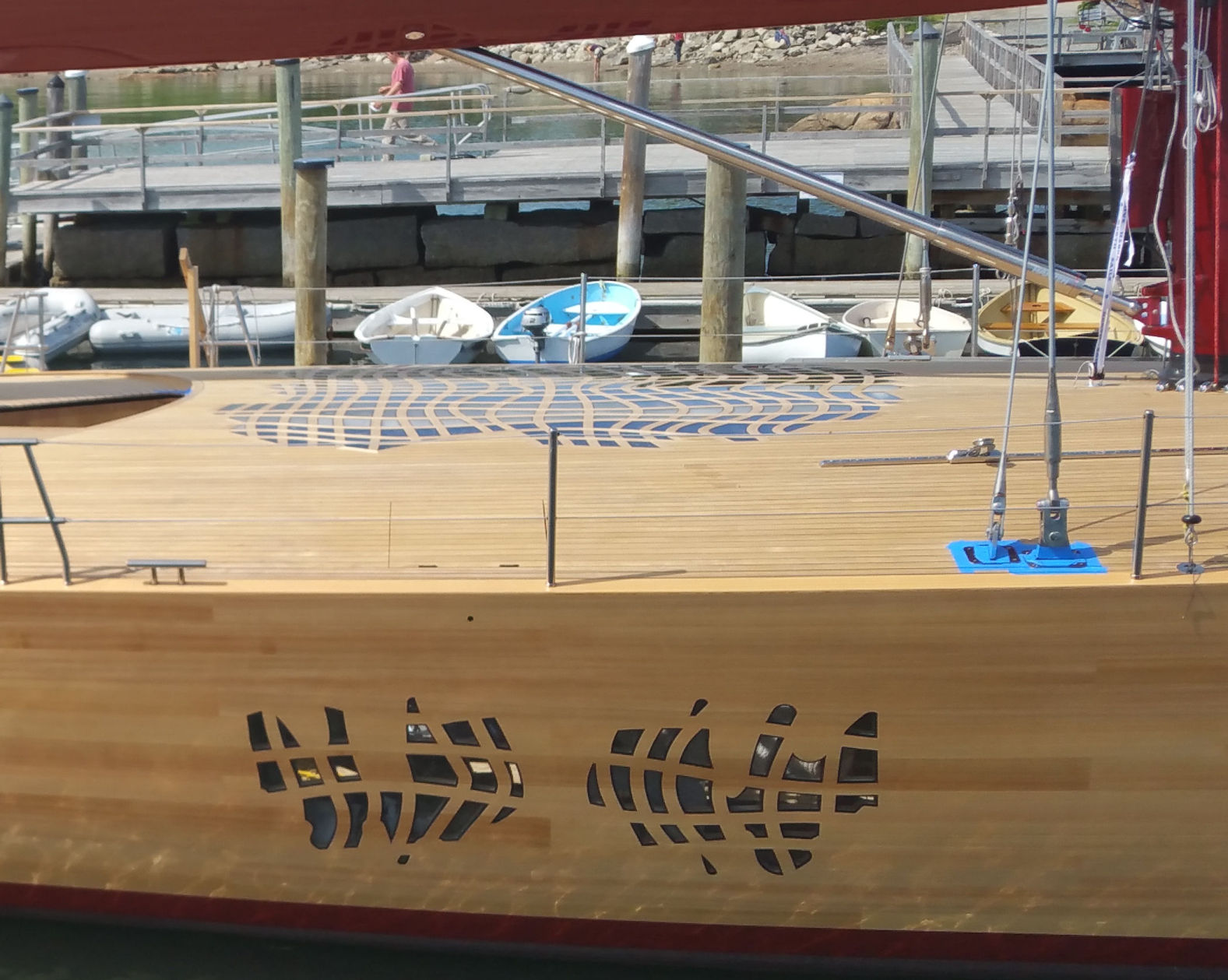 Steve White, owner of BBY, speaks about this remarkable yacht and it’s impressive engineering in the following video.  Supposedly, there will also be some sort of dodger although it wasn’t installed when I saw her in Newport, and I am sure that it will be as awesome as the rest of the boat.  Rodger also told me that the additional detailing on the bowsprit was constructed with a 3-D printer of sintered titanium, whatever that is, it’s plenty cool. 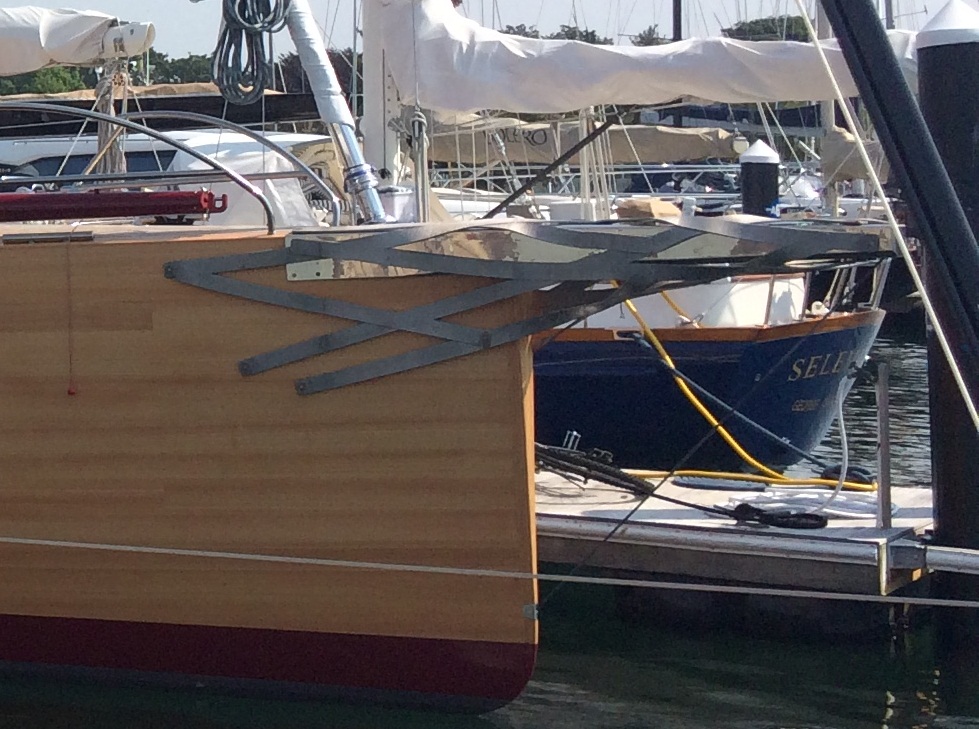 Well, that’s enough about other people’s boats for now, that would be OPB, so what’s happening to lowly Pandora?

Thanks for asking.  there are still tons of things to do and time is short.  Yesterday the rigger pulled the back stay and will be putting insulators in it so I can use it as an SSB radio antenna.  Of course, the stay itself is not “standard” having been built in Finland so I’ll need a new one.  Great… What else is new.

I also finally was able to install a new strainer for the water cooling for the freezer and fridge.  The old one, and a pint sized one it was, kept clogging up and starving the water flow to the compressor.  Not good and lead to a few overheat moments.   Double not good.   That would be for b0th the compressor and for me when I discovered the problem.  Here’s a photo of just how teeny tiny the old one was. And, let me tell you, a ton of water pumps through this each day, especially when it’s hot. 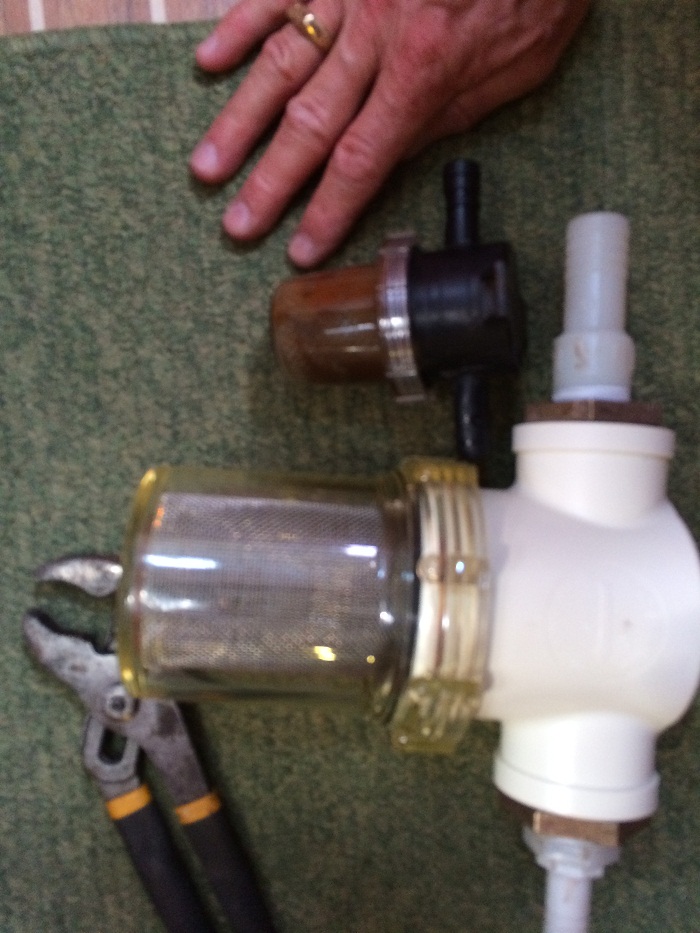 The new setup is much more substantial.  I wanted to provide more volume of water and have strainer that was less prone to loading up with weed than the old one as I’ll be leaving Pandora in Tortola for over a month.  Yes, someone will be watching her and checking things regularly, but I really, really don’t want to have a freezer of food spoiled or worse, loose my fridge compressor.   The strainer to the right, in the photo below, is for the water maker and is about twice the size of the one that I replaced on the fridge.  Fingers crossed that this will perform as planned, or should I say “hoped”. 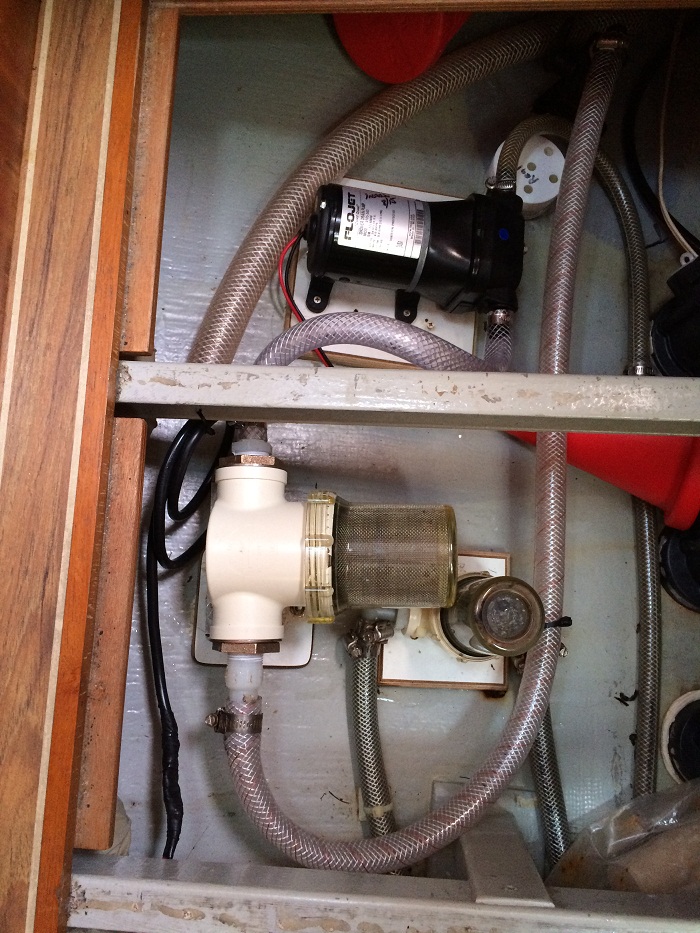 And, as Gilda Radner once said, “it’s always something” and Pandora’s no different. The other day the unit that keeps track of the battery decided to crap out.  I understand that there are two fuses on the unit and I spent hours hunting for them, only finding one so far.   This little baby is critical as it tells me the state of the battery charge and having a unit that works every time is really important.   Before I spend another $300 on a new one, I’ll try and find the other fuse.  If not, UPS on the way.

Well, I guess that’s about it on boat sighting updates so I guess it’s time to hit the road and get to work on Pandora.  Time’s short.  Yikes!!!

It’s becoming clear that OPB or perhaps better said, OPS  (Other Peoples Submarines) sailing would be a lot easier than this.  Perhaps I can head out for a cruise on the USS New Mexico.  “In your dreams Bob. REALLY…”