On Friday, as I headed from Wickford RI toward the CT River, where Pandora will be hauled for the next few weeks prior to beginning my run south to the Caribbean for the winter, I was passing New London and heard something on the radio about a sub passing a tug in The Race.  Before I knew it, I saw this approaching me from port.   Or, was I approaching him?  Hmm…  In case you are wondering, he did show up on AIS, cruising at 9kts.   However, no info about size etc.   I guess the Navy doesn’t want their “silent service” guys to show up on everyone’s chart plotter.   It just wouldn’t do for a multi billion dollar sub to be spotted on a $400 AIS receiver, would it? 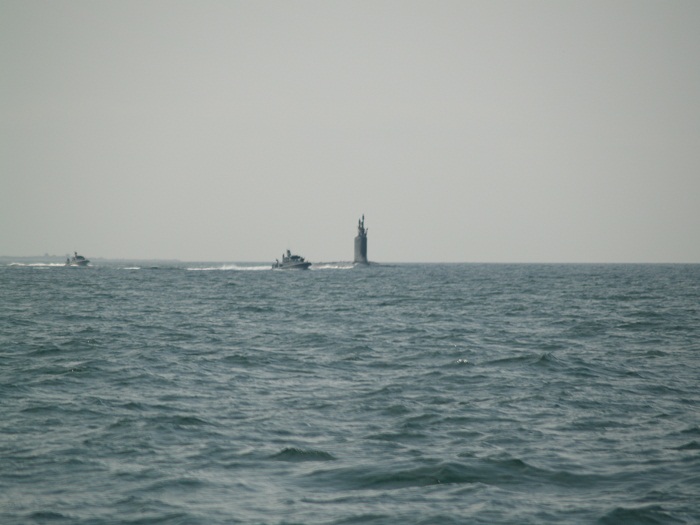 Anyway, I turned to port and luffed to let him pass.   I surely didn’t want to head in front of him, pint size sailing boat right-of-way or not, and besides, the guys on the support boats looked plenty serious as they approached.  They weren’t smiling or waving HI as they passed, flack jackets, machine guns and all. 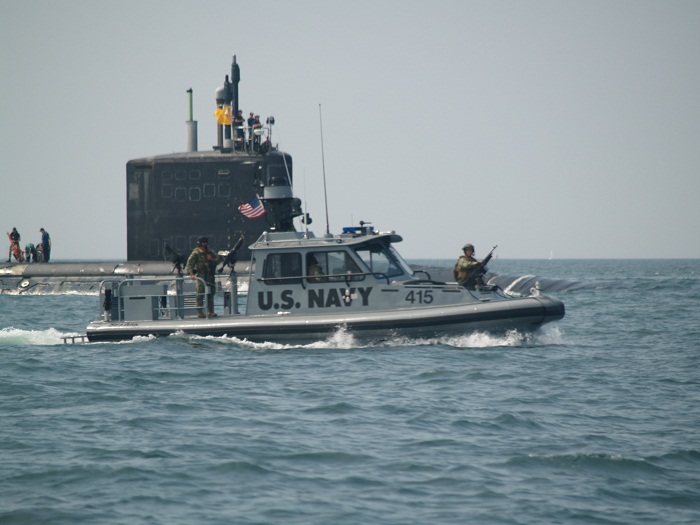 I couldn’t believe how close they came to me, or was it me to them?   I would guess about 100 yards.  I am used to 1,000′ exclusion zone for military ships.   To get a shot of the whole boat I had to zoom my lens all the way out.  She was REALLY close. 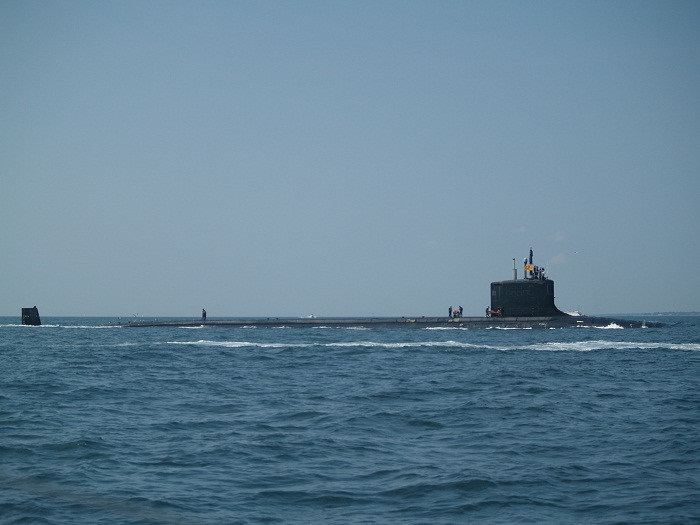 Just how close?  This close… 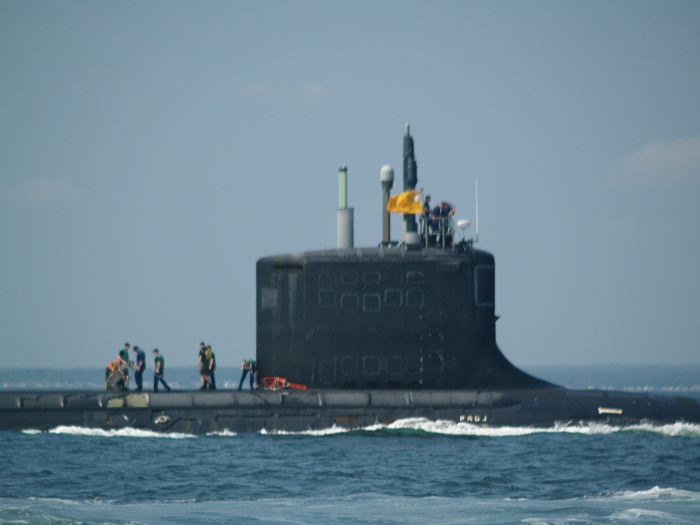 I was wondering why a sub would sport a yellow “Q” or quarantine flag and when I posted some photos on Face Book I learned about that and more.  I got an amazing number of responses and someone noted that it was the state flag of New Mexico and that the sub, only the second warship in the history of the US Navy to be named so, was the USS New Mexico.  Someone else sent a link to the New London Day, with an announcement of the boat’s arrival.  Here’s a story and pictures of her arrival to an enthusiastic crowd.  She was just back from a tour of the North Atlantic covering 36,000 miles.  One of her “port” stops, about a year ago, on a previous tour, was at the North Pole.  They surfaced through the ice near where the Nautilus, the first atomic sub did so years ago.

This is a short video of her surfacing in March of 2014 at the North Pole.   The weather that day was a lot different than it was when she steamed by me on Friday off of her home port, New London.   With the North West Passage more open to shipping each year, compliments of global warming, I guess that the USA wanted to make it clear that we plan to be active in the Arctic.   While they were on the ice, they flew a New Mexico state flag that was later presented to the Medal of Honor Award recipient Hiroshi Miyamura, who received the recognition in 1951 for his valor in a battle during the Korean war. This moving description, which I have repeated below, of the actions that earned him the award is from the Congressional Medal of Honor Society website.

“Cpl. Miyamura, a member of Company H, distinguished himself by conspicuous gallantry and intrepidity above and beyond the call of duty in action against the enemy. On the night of 24 April, Company H was occupying a defensive position when the enemy fanatically attacked threatening to overrun the position. Cpl. Miyamura, a machine gun squad leader, aware of the imminent danger to his men unhesitatingly jumped from his shelter wielding his bayonet in close hand-to-hand combat killing approximately 10 of the enemy. Returning to his position, he administered first aid to the wounded and directed their evacuation. As another savage assault hit the line, he manned his machine gun and delivered withering fire until his ammunition was expended. He ordered the squad to withdraw while he stayed behind to render the gun inoperative. He then bayoneted his way through infiltrated enemy soldiers to a second gun emplacement and assisted in its operation. When the intensity of the attack necessitated the withdrawal of the company Cpl. Miyamura ordered his men to fall back while he remained to cover their movement. He killed more than 50 of the enemy before his ammunition was depleted and he was severely wounded. He maintained his magnificent stand despite his painful wounds, continuing to repel the attack until his position was overrun. When last seen he was fighting ferociously against an overwhelming number of enemy soldiers. Cpl. Miyamura’s indomitable heroism and consummate devotion to duty reflect the utmost glory on himself and uphold the illustrious traditions on the military service.”

Amazingly, Miyamura survived that day and was presented the award by President Eisenhower.   It was fitting that the flag, flown in the frigid North Pole winter be presented to Miyamura as he had endured a harsh winter as a POW, following his capture.  He survives to this day and is in his 90s.  I am sure that there are other MOH recipients who’s story is as compelling as this one but to see the New Mexico steam across Pandora’s bow, and to learn of this story, only improved what was a moving moment.

The USS New Mexico was commissioned in Newport News and is said to be the most advanced member of the Virginia Class of subs.  This is an interesting time lapse video of her being brought out of the shed and launched in Newport News.
One of the best parts of spending time on the water is seeing things that are totally unexpected and my “encounter” with the USS New Mexico certainly tops the list.  It was a treat for me and Pandora, thanks to some serious looking but tolerant guys with machine guns and flak jackets in fast black boats,  to spend some “quality time” with such a remarkable vessel.  For inquiring minds, like yours. Here’s  link to the “official” USS New Mexico site.

It won’t be long until Pandora heads into Hampton Roads, near where the sub was built as I join up with other Dawgs preparing to run in the Salty Dawg Rally to Virgin Gorda in early November.

As I write this I realize just how short the time until Pandora begins her 2015-2016 “tour” so I’d better sign off and get to work.