Brenda and me in Nantucket.  A proper arrival.

It’s Thursday morning and Pandora is anchored, for my second visit this summer, here in Nantucket.  Brenda and I arrived on Monday after a two day run from Stonington CT with a stop in Cuttyhunk.   As I mentioned in a recent post, Brenda and I have not been to Nantucket together by boat for many years so it’s good to be back. On our first visit, back when we were, shall I say “less mature” and boat was oh-so-much-smaller, our only way to get ashore was in a pathetic inflatable canoe we not-so-affectionately called “the green bean”.    Now, with our Caribe dink and powerful outboard, we can make it all the way to town without getting wet.  That’s a big improvement over our first visit here so many years ago.

Speaking of wind, there wasn’t quite enough wind for our run from Stonington to Cuttyhunk and the bottom was pretty nasty after two months of inattention, so under power Pandora was pretty sluggish and acted more like a heavy SLOW cruising boat than what I am getting used to.

We anchored in the bight outside of the harbor in Cuttyhunk and spent time with friends with them on their boat nearby.  It was a lot of fun.  I was particularly amused by this sight of “two men in a tub”, a very small and LOW TO THE WATER dink that went by.  They were getting soaked and the guy in the bow was pulling furiously on the painter with the hope of keeping some of the water out. Brenda wouldn’t have liked that at all.    It reminded us both of our “green bean”, only ours was even worse. 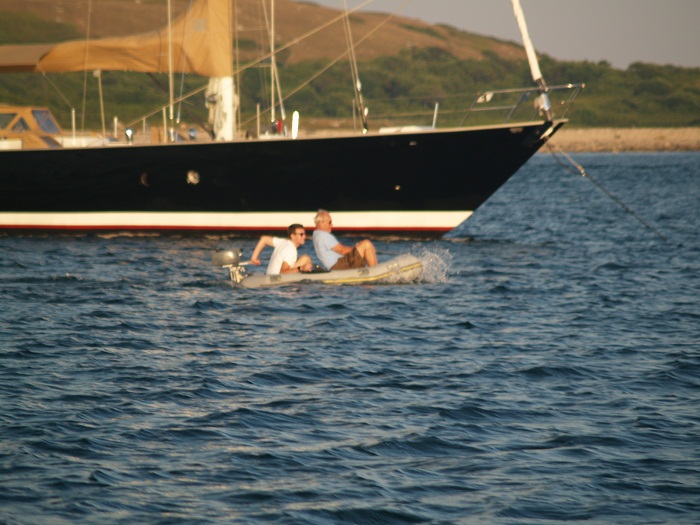 Anyway, Pandora’s slimy bottom was calling, so I bit the bullet on Monday at Cuttyhunk and went for a swim to clean the bottom.  WOW!  What a mess.  It’s hard to say exactly how much slime there was but I’d say that there she was sporting an 1/8” to ¼” of “nasty” over her entire bottom.  The first layer was fresh water slime from her short visit in the CT River and after a few weeks in Wickford, salt water slime grew on the now dead FW slime.  Yuck…

I normally use a coarse Scotch Brite Pad to clean but that didn’t work as it just loaded up and pushed around the slime without actually taking if off.  I ended up using a scraper and then the pad, for two hours.  I was bushed.  Thanks to the hooka compressor, I was able to do the entire job without stopping.

Anyway, after that cleaning, even though it wasn’t a perfect job, we caught the tide past Martha’s Vineyard and on to Nantucket.  We carried the flood most of the way to Nantucket but were bucking about a knot of tide by the end.  However, with nice 15 kt breeze on a close reach, against the tide, we were still doing better than 8kts, over the bottom, for much of the trip.  It as a great ride.  And, as this was the first long run that Brenda’s done with me, she was very happy that Pandora’s heel was a comfortable 12-15 degrees.

As we approached Nantucket in the afternoon, some lovely old wooden boats and a few old 12 meter America’s Cup boats passed us heading west after participating in the Opera House Cup, a race for wooden and classic boats, that previous weekend. 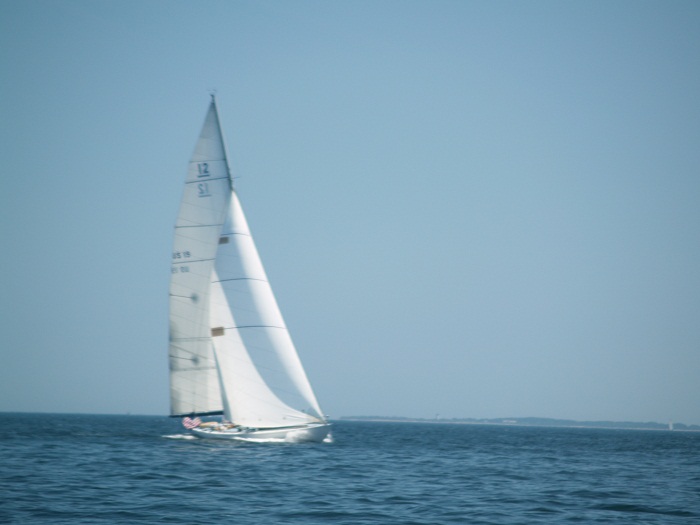 I particularly liked seeing this Herreshoff NY30, a classic designed as a one-design class for the NYYC back in the 30s, I think. 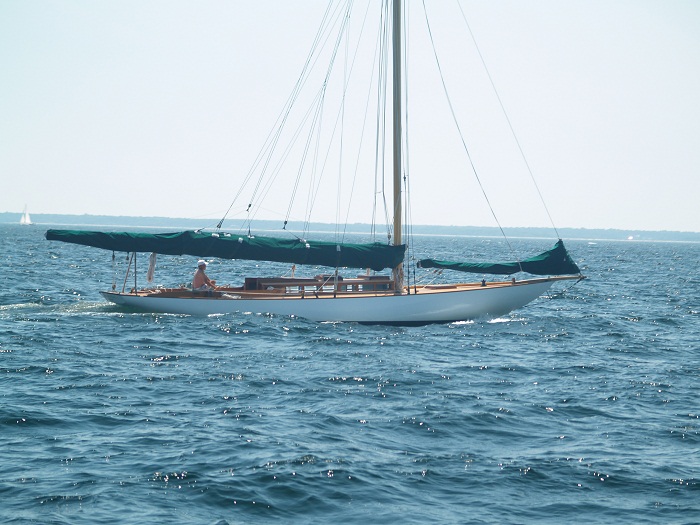 There is a lovely Friendship Sloop that gives rides in the harbor, several times a day. We enjoyed watching her sail by in the evenings. 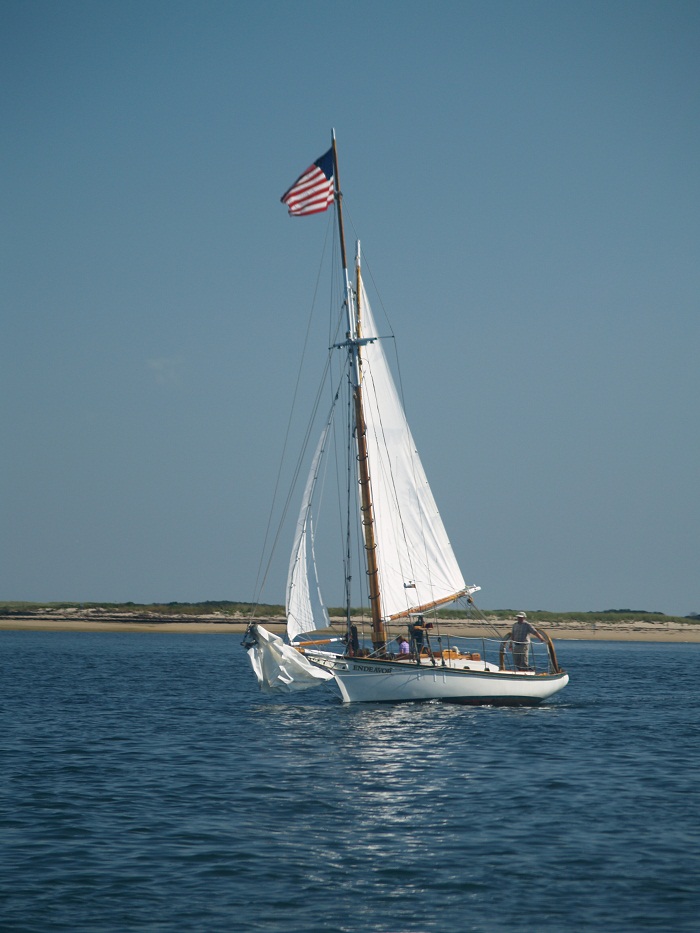 I particularly enjoyed this beautiful expedition yacht anchored nearby.  What lovely lines. 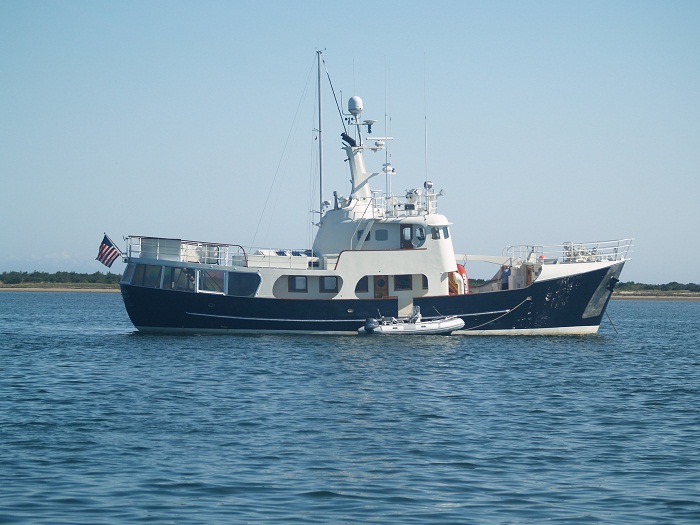 We walked around town PLENTY on this visit.  At the end of the day my “dogs were aching”.  It was fun to see the sights.  I enjoyed watching this gentleman painting on Main Street. 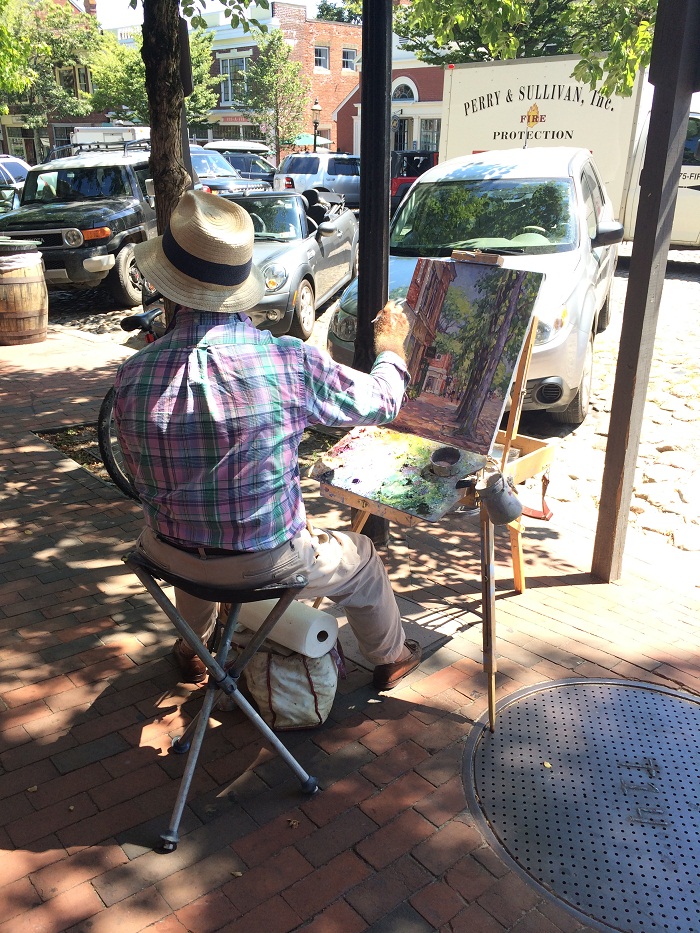 We also visited the “oldest house”.  How old? Well, it was really old and to live in it would have been as rough as heading across the harbor in our old green bean dink.  Pretty though. 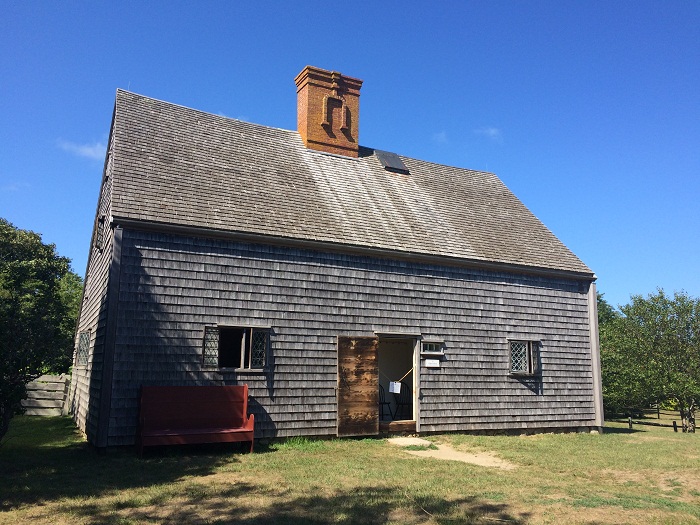 On a mooring nearby was Linx, a lovely schooner from Portsmouth NH.  She fired off an impressive cannon at sunset.  Quite a sound and lots of white smoke.  Fun. 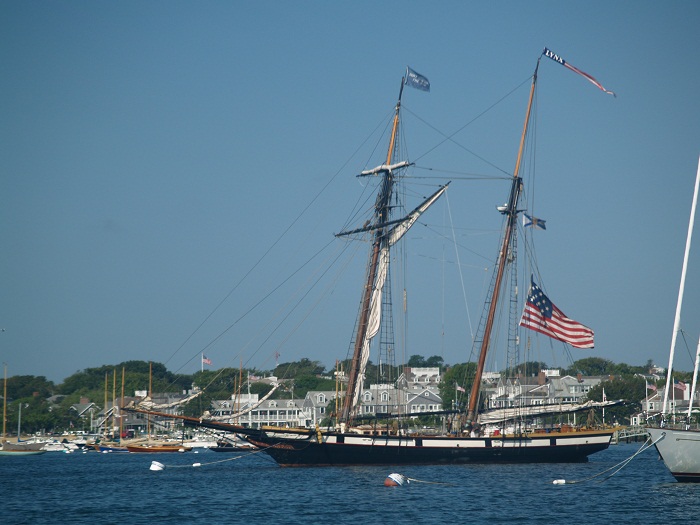 Speaking of sunsets.  We were treated to several wonderful ones while we were here. 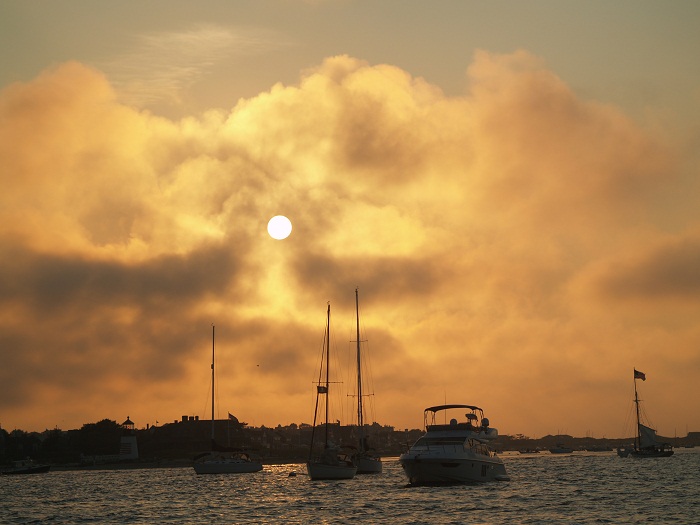 After so many years of sailing New England waters, it is fun to be back in Nantucket.  And, with their hugely expensive mooring fees, we can now anchor and make it ashore dry and comfortable with our good dink and 15hp engine.  It’s nice to have “arrived” with at least a dink that can get us there without getting soaked along the way.

Today we will head to Edgartown for a day and then begin in earnest our run to Wickford by the weekend.  Happily, the winds remain favorable for the run back with SE forecasted for the next few days.

I guess that I’d better wrap this up or we won’t make it to Edgartown in time to enjoy the sights today.

3 responses to “Brenda and me in Nantucket.  A proper arrival.”