It’s Wednesday morning and Memorial day weekend has come and gone.  The marina parking lot, that had been full to capacity with double parked cars just one day ago, was virtually empty as everyone had gone back to work after the long weekend.

I have been unpacking and organizing Pandora from her run north and trying to sort through all of the gear that we had quickly stowed aboard as well as the stuff that the last owner had left.  As their new boat is a trawler, a big switch from a sailboat, they decided to go with an all new color scheme.  As a result, they left some of the custom touches such as throw pillows and linens which was great for us.

Speaking of the bunk, the mattress is not just a foam cushion as we have had on our other boats, but an actual custom made innerspring mattress.  It’s very comfortable.  They also left custom sheets, designed to perfectly fit the mattress.  I put them on yesterday and we are very pleased with how they look.  Yes, it’s a bit tough to make up a Pullman berth but the results were very nice.  Interestingly, the sheets are custom to the boat and were cut so that while there is plenty to tuck in at the foot as well as along the bottom third of the inside, against the hull, from the middle of the bed to the head, the fabric was cut to fit with no overlap.  Sounds like  a small detail but it means that the made up bed looks very finished without extra fabric bunched up against the hull. Yes, a detail that appeals to an anal guy like me. 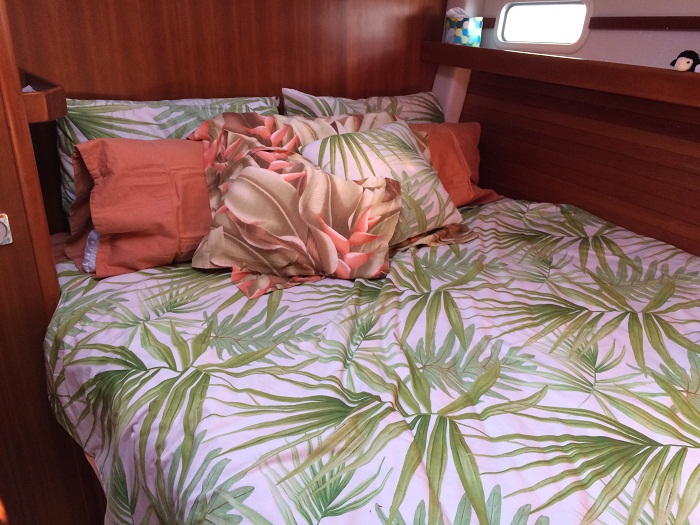 Last evening Brenda and I went aboard Pandora to move her from the dock where she was for a few days of unpacking to her mooring and enjoyed the sunset over a bottle of bubbly supplied by our friends Rodney and Genie for us to toast Pandora’s homecoming.  What a thoughtful touch.  Sorry they weren’t with us to celebrate the moment. 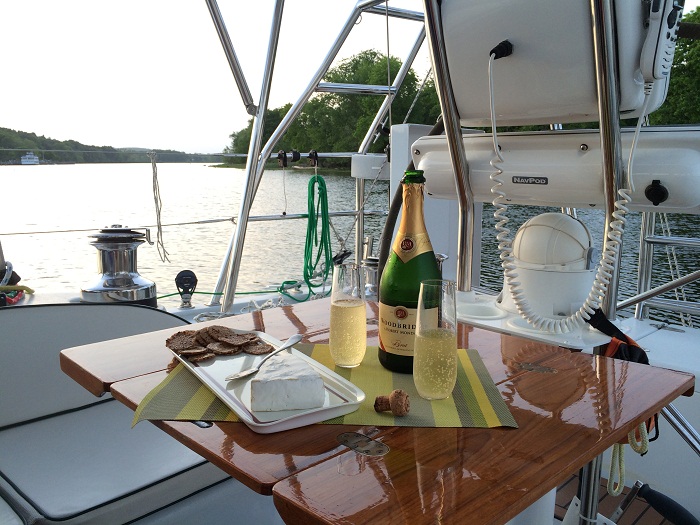 She looked great in the warm light of the setting sun. 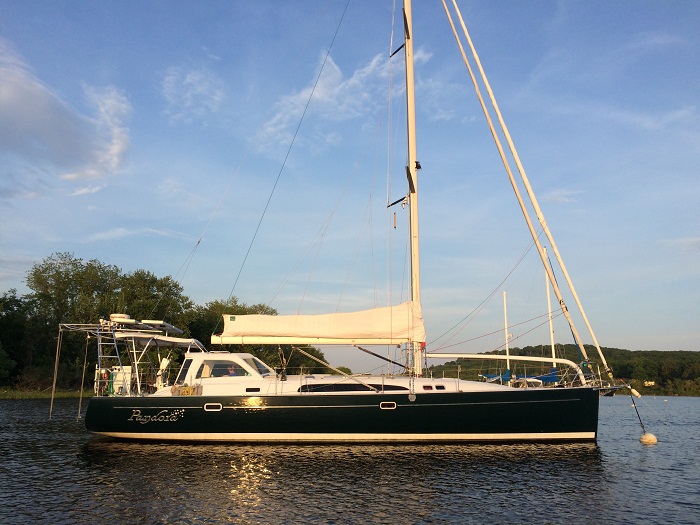 Yes, both Pandora and Brenda peeking out from under the dodger, looked perfect.  A very nice evening.

On Thursday evening I am attending a fundraising event at the CT River Museum (Brenda’s out of town) and I will be offering up Pandora for a luncheon cruise for 4 in the silent auction.  I’ll be putting a few photos together, with a description of the outing, with the hope of making the offering as inviting as possible.  I’ll also put Pandora on a mooring off of the museum grounds so that bidders can see her first hand.

Brenda staged a shot of what the lucky bidders will enjoy aboard.   Doesn’t it make you want to plunk down hard cash to benefit the museum? 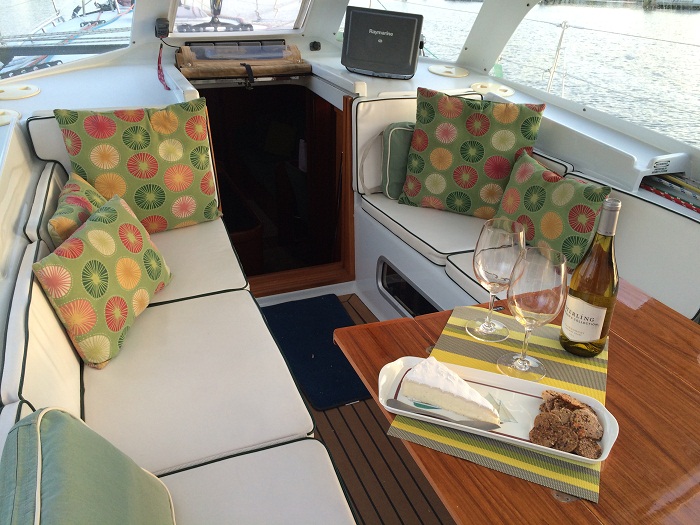 Well, it’s not all fun and games aboard Pandora these days as there are still plenty of things that have to get done to make her ready for her fall and winter voyages.

The next step is to install more solar panels aft, on top of the davits.   She already has 320 watts of solar on top of the bimini and it’s been estimated by the folks at Hamilton Ferris, the dealer, that I need around 200 watts more to make Pandora fully functional off of the grid and able to fend for herself on a mooring and “unplugged”.

There is room on the davits for about 300 additional watts so I will pack on as much as will fit and cross my fingers.  I can still put some additional wattage on if needed but I am hoping that a total of 620 watts will do the trick.  And, it’s important that there be some excess capacity to make up for cloudy days and it’s critical that we be able to keep the house batteries up to full charge as I don’t want to do anything to jeopardize, and perhaps shorten the life of  that expensive bank.

I will also have to address the upgrade on the watermaker so that I can increase the capacity to 14 gph from her current 6.5 as we do use a good amount of water.    And the SSB radio also has to be installed.

Yes, it’s becoming clear that Pandora owns us now I had better be sure that I do everything that she asks for.  Between Brenda and Pandora, I’ll be plenty busy this summer.