>Where did a certain sailor from Maumbai spend his Christmas?

>Today, when doing what I do most mornings, checking out a few blogs including Jessica Watson’s, she mentioned that she had been corresponding with a member of the Indian Navy who is sailing around the world on the first fiberglass boat built entirely in India.  What’s interesting, is that they have been communicating and are currently closer to each other than they are to any other person on the planet, or at least to anyone that they are aware of.  They are both so far from land that it’s each others boats that they are closest to.  I checked out the other blog and it turns out that the skipper is Dilip Donde who is sailing around the world, with a number of stops, on a custom made 47′ sailboat.   His blog is interesting and I have been reading some of his past posts.  He left last August from Maumbai India sailing south and then to the east making his first stop in Fremantle Australia.  After a week he headed back out and is now closing in on Cape Horn as is Jessica.

It must be wierd to be so far from everything and yet so close to someone that you have so much in common with.  Dilip’s blog includes a daily posting of position so check his out and see how it compares to Jessica’s 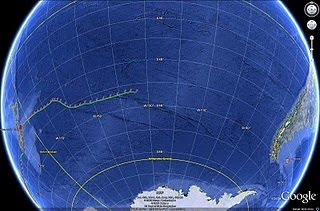 Jessica’s location is east of him but I am not sure how far as her map doesn’t have latitude and longitude lines on it.  Check her location here.  One way or the other, they are close.  I wonder if they will try to pass within sight of each other.  I expect that they will.
Dilip’s boat is a lot faster than Jessica’s so it won’t be long until he reaches and passes her.
This entry was posted in Uncategorized. Bookmark the permalink.