Memorial Day and there is a lot to be thankful for.

It’s Saturday morning and the beginning of Memorial Day weekend, the unofficial, or is it the official start of summer?  One way or the other, a detail.  For many, especially here in the NE, it’s the first weekend for many to get out on the water.

For Pandora, now safely back home, it’s time to take a deep breath after months of sailing to pull her from the water and get some needed work done, both maintenance and upgrades so she’ll be ready for the 2015/16 sailing season when we head south next fall.   And, of course, with a new boat, there’s always plenty to do with the addition of more solar, the SSB radio, upgraded water-maker and shall we say “so much more”.

However, as I sit here I can’t help but think about the real meaning of Memorial Day and those who sacrificed so much to make it possible for the sort of leisure that we enjoy, and me in particular, here in the good old US of A.

For this weekend, Brenda and I are in MD visiting our son Rob and his fiance Kandice for a few days and last night we watched the movie, American Sniper for the first time.  I have to say that it was a very moving story of one man’s sacrifice to serve his country and it certainly gave me pause for thought about what Memorial Day really means, official boating season start date and all.

In case you haven’t seen the movie, check out the trailer.  It’s a very moving and true story, of a real american hero, Chris Kyle.  He was a SEAL and the most lethal sniper in American history.  It is because of people like him that our way of life is even possible. While I was in Ft Pierce FL waiting for the weather window to open for our run north with Pandora, I rented a car and took my crew, one of whom was a veteran, to the SEAL museum, a place that I had wanted to visit for some time.

I have to admit that I didn’t know much about that service but knew that they were some pretty tough dudes.  Well, I was impressed with what I had learned but didn’t have an opportunity to write about our visit until now.  And, given the importance of this holiday and seeing the movie last night, I woke up this morning thinking that the time was right to do this post.

The ‘SEAL museum is in Ft Pierce, once the training ground for the SEALS, prior to their moving to San Diego, where they are now located.  However, given their history, it is fitting that the museum be in FL.  The museum is designed to represent the history and work of the group and it does a very nice job.    Their site gives a good overview of what’s there.

There are some very interesting exhibits with a focus on their “ethos” and what they are all about as a group and indeed, they do amazing things.   There are also special exhibits there commemorating particularly important milestones such as the killing of Bin Laden and the Maersk Alabama rescue of Captain Philips that inspired the movie of the same name. 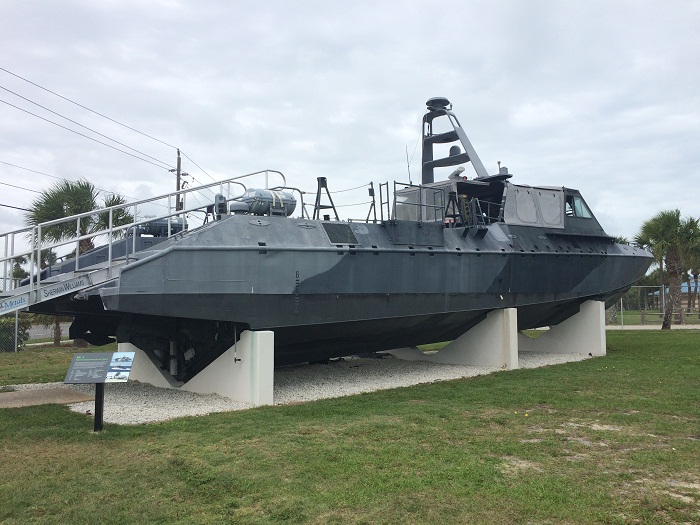 And, this go-fast boat would fit right in in sunny Florida.  I am not thinking that they would hail me on the radio and say “Pandora, we’ll give you a slow pass port to port”.  Not likely. 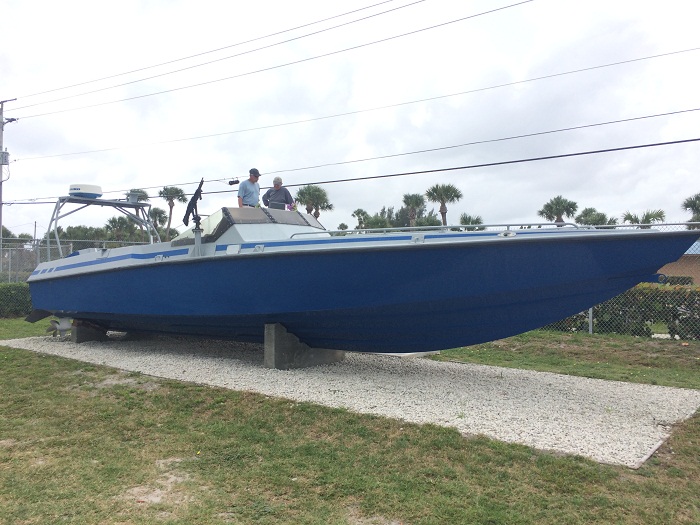 One of the exhibits is from the Maersk Alabama and they have the lifeboat, bullet holes and all on display. 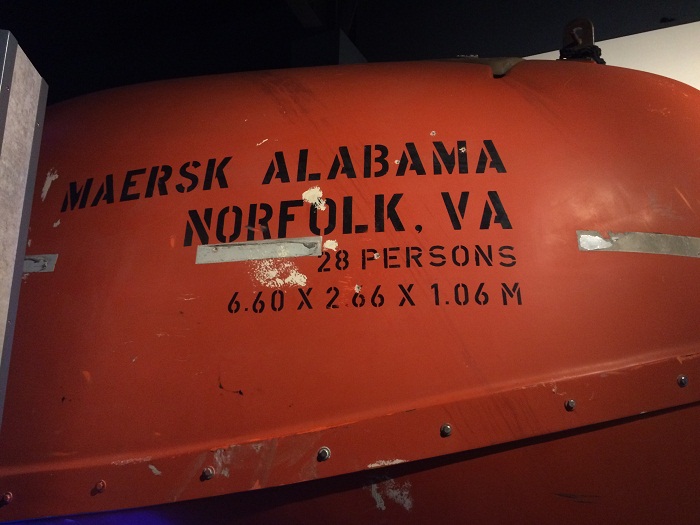 And, no, I couldn’t find a way to get a better photo of the lifeboat.  In case you haven’t seen the movie Captain Phillips, it’s terrific.  Check out the trailer.One of the displays was this nifty gadget for climbing up the side of a ship.   Much sexier than a hook on a line.   Just stick this magnetic crawler on the side of a ship and it climbs up and drops a ladder.  I can only imagine what sorts of gadgets they have that nobody knows about. “Yes, we have some very cool stuff and I’d tell about some of them but then I’d have to kill you sir”.  Ok, got it. 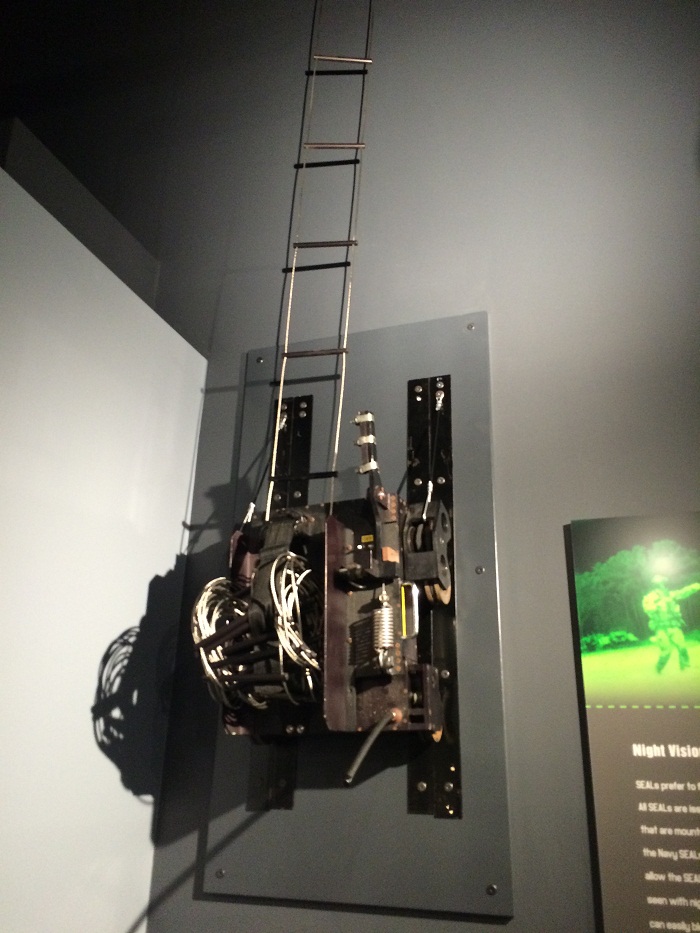 In the museum store, and you HAVE to visit the store in any museum, I was struck by the message on this hat.  Yep, note to self,  best to skip the hijackings. 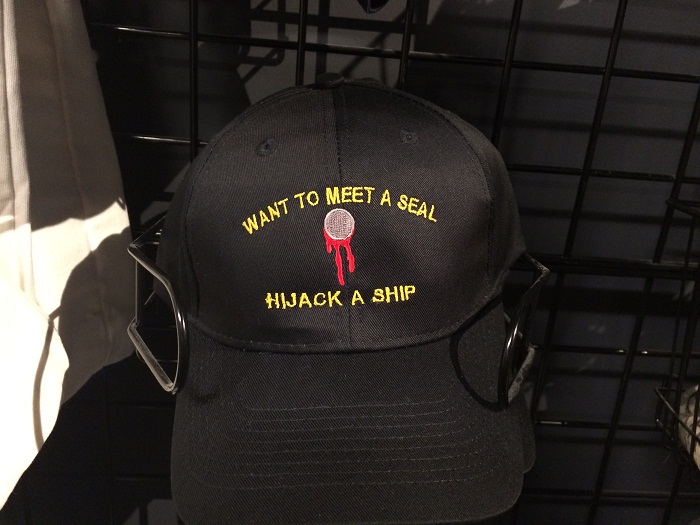 The store has EVERYTHING.  They even had NAVY SEAL action figures. 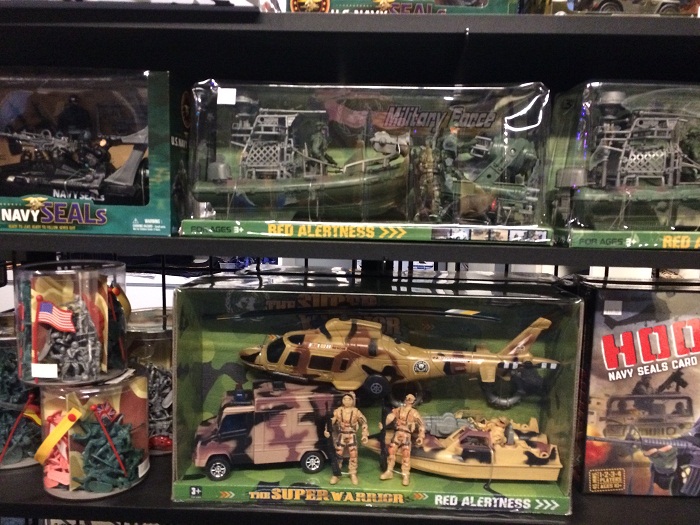 The museum also has a great collection of armament from Desert Storm.  I had always thought of SEALS as a group that worked on the water but most of their missions actually take place on land.  I’d love to go for a ride on one of these across sand dunes.  However, not in the unfriendly areas that these guys go in. 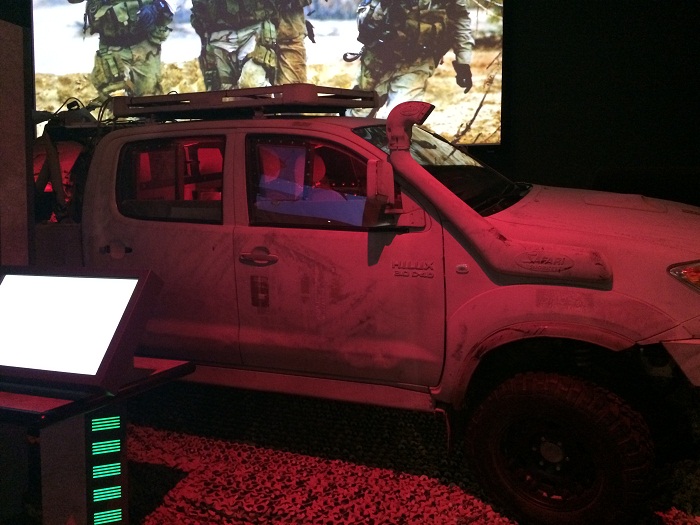 I can only imagine what it’s like to be deep in bad guy territory running around in the dark.  Better them than me.   I guess that’s the point exactly.  They do it so we don’t have to. 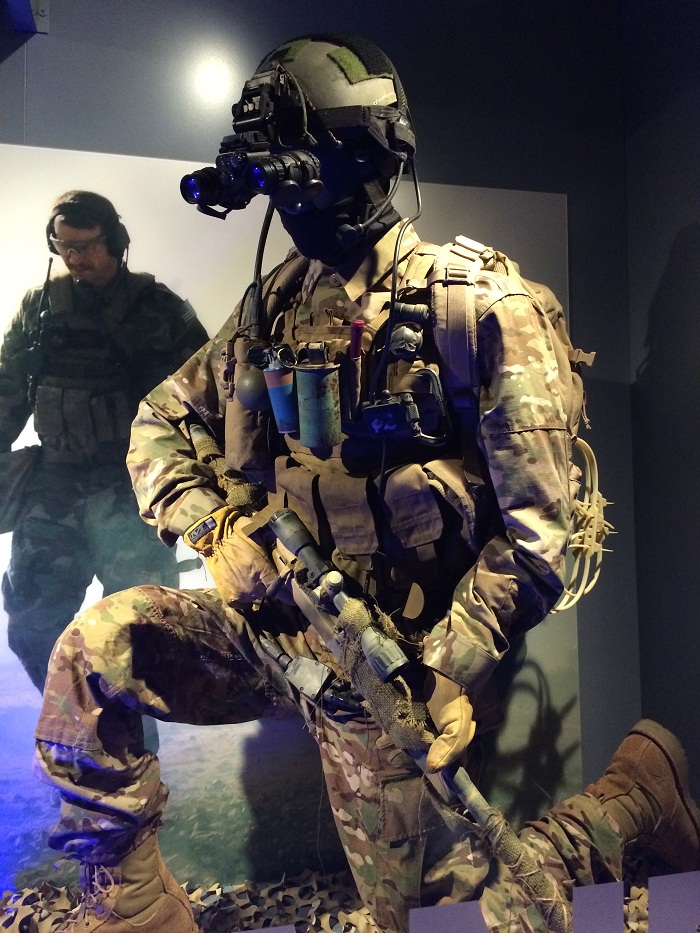 Well, if a picture is worth a thousand words than this video, one that you can see at the museum, is worth… well it really gives you a good feel for what the SEALS are all about.  And, let’s just say that their experiences on the water are a bit more exciting than what Brenda prefers.All and all, the museum was both sobering and inspiring so, to me, it’s fitting that I write about it to remind myself what Memorial Day is really for and what those in the service do for us every day.

2 responses to “Memorial Day and there is a lot to be thankful for.”