http://thomasgull.com/wp-includes/images/css.php It’s Sunday morning and as I begin this post we are less than ten miles from Montauk and “home” waters.   It seems like yesterday when Brenda and I thought that a long trip was the 100 miles from Norwalk YC to Martha’s Vineyard or Block Island.   These days, well a little different, when our cruising grounds take us from New England waters to less than 100 miles from Cuba.  Speaking of Cuba, I wonder if we’ll be there next winter.  If we are, I can say with certainty that we won’t be alone.

http://carlabaz.com/shop?orderby=menu_order Well, I am glad to be (almost) home.  This run north has been a long one as my as my crew, Michael and Jim arrived two weeks ago today and I count myself lucky that they agreed to stay this long.  Actually, I am not certain that they actually agreed but being 50 miles from shore made tough for them to say.  “All done Bob, I want to go home now.”

This trip has taken a full two weeks in contrast to my last two runs that took a week or less. and were several hundred mile longer.  When it comes to sailing “when are we going to get there?” is a particularly big question and it seems like the weather windows have been much shorter this year.  Perhaps I’ll ask Al Gore.  He did, after all, invent the Internet and global warming.  “Al, what gives?”

The last two days running from Hampton VA  have been long and a bit frustrating as the wind, while plenty strong for sailing, was from nearly behind us, a difficult wind angle, particularly on a new boat where I am not familiar with the best way to sail her.   With the constant rolling and banging, it was difficult to move around and keep things in order.  However, there is a marked difference in comfort aboard this verses our last boat and having the hard dodger to sit under is clearly an improvement.

However, with a larger and more complex boat comes larger problems and we have had a few on this trip. Oddly, nearly all of them seemed to resolve themselves spontaneously or with hours of tinkering on my part.  “Did I fix the problem or was it just magic?”   Who knows…   Mysteriously,  a few of the electronic instruments stopped working and just as unexpectedly, started worked again.  I guess I’ll leave well enough alone and deal with them if they stop working again.

The plotter at the helm stopped working yesterday (don’t worry, I have two) as did the AIS (alas, only one) and after hours of tweaking at connections and wriggling into impossibly small spaces (Did I mention that the boat was wallowing and banging around as she slogged down wind and waves?) I was finally able to trace the problem to a single tiny brown wire under the aft cockpit that I had not reconnected securely when I was rerunning cables after the work on the davits was completed.  I worked all day yesterday trying to get the AIS to work and after setting aside the problem for a few hours I suddenly remembered a small junction box that I had not checked.  YES!  A teeny, tiny brown wire had come loose and “voila”, fixed but the AIS still wasn’t working.   However, it wasn’t until almost two hours had passed that I remembered to turn on the AIS again.  Hurrah! Now it worked.  Was it the teeny, tiny brown wire or just magic?   I was particularly concerned about having that system working as we crossed the busy NYC shipping lanes.  I wanted to see them and, perhaps more importantly, be sure that the big ships saw me.

Well, it worked and that’s a good thing as I was beginning to feel like Clark Griswold,  the hapless father character played by Chevy Chase, in the movie Christmas Vacation, when he couldn’t make his holiday lights work.  Just plug them in… I like to think that I am better than him.  Hmm…

As is often the case when I am running offshore, we were visited by a little bird that stayed with us for several hours, exploring, and pooping on, every corner of the boat before leaving as quickly as he arrived.  Here he’s (or is it a she?)checking out the little bromeliad that Brenda and I had on board for our trip after picking it off of a tree in southern Florida.   It will be interesting to see how it (the plant, not the bird) likes CT summer weather. 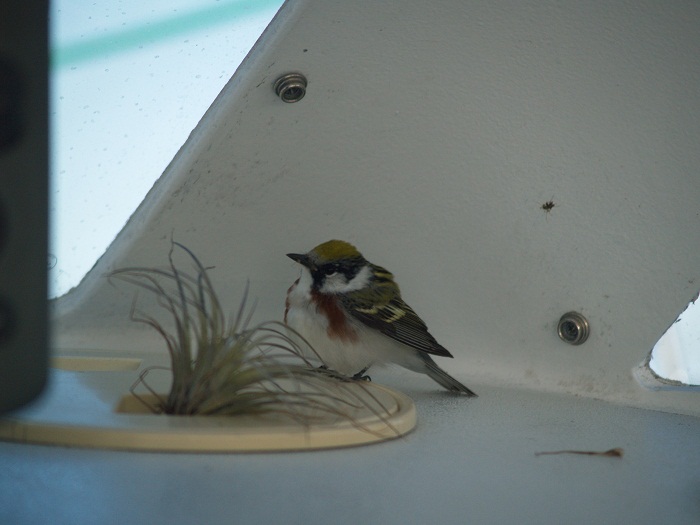 Here’s a map of our run from Hampton To Montauk including the windy part inside from below Cape Hatteras.  You can see why I prefer ocean passages.  Pretty straight line compared to inside.  However, it’s a lot tougher to drop the hook for dinner and a cold beverage at night. 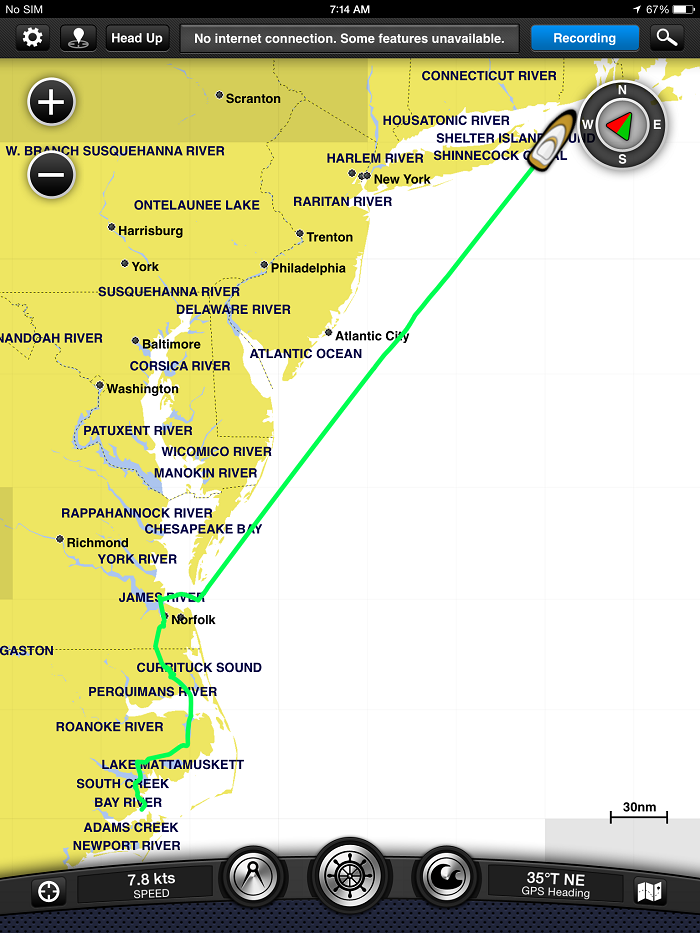 So, as we round Montauk Point and enter Long Island Sound, I think that the only thing not working is the Engine hour meter.  I believe and hope that  it’s counting away but, for now, here’s to hoping that it’s a “covert counter”.   I’ll also have to decide if I am going to pull the speedo and plotter to have them checked as they both didn’t work and now do.  I wonder if it had to do with that little brown wire?

I guess that’s about it except to say that Michael and Jim have been great crew based on the way that they scarfed down the meals I prepared, won’t boycott Pandora because of the cuisine.   It’s funny how guys tend to descend into decay and will eat most anything, and enjoy it, when they are out of sight of women.

I wonder if Jim will shave  before he gets home.  It’s a good thing that this trip didn’t take a month or he’d have begun looking like Tom Hanks in the movie Castaway.  Well, better that than Wilson I guess. 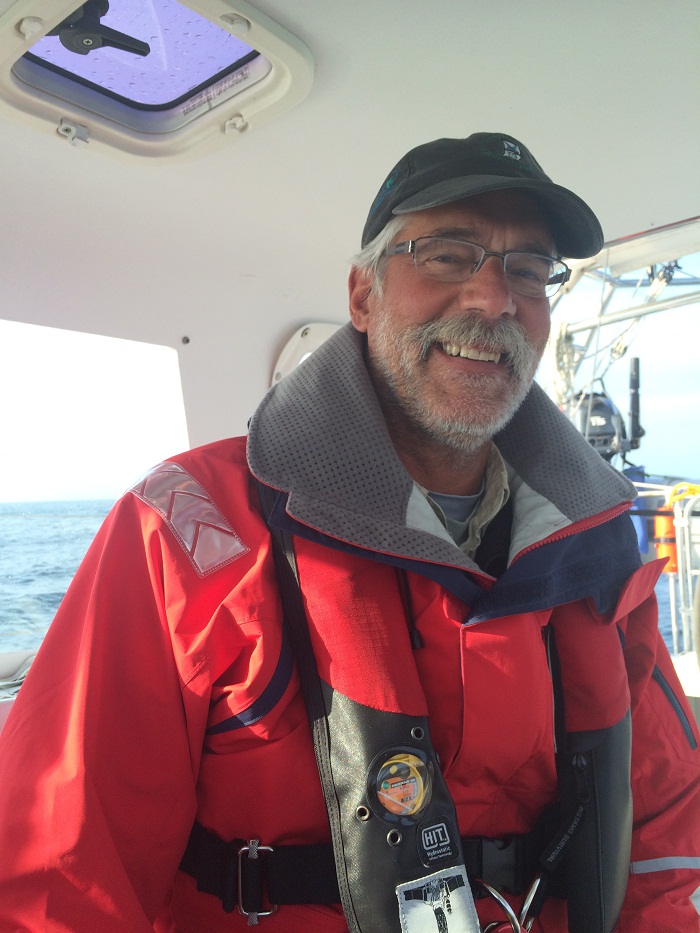 Perhaps I’ll close with a shot of the final sunrise from my winter aboard, as we approach Montauk. 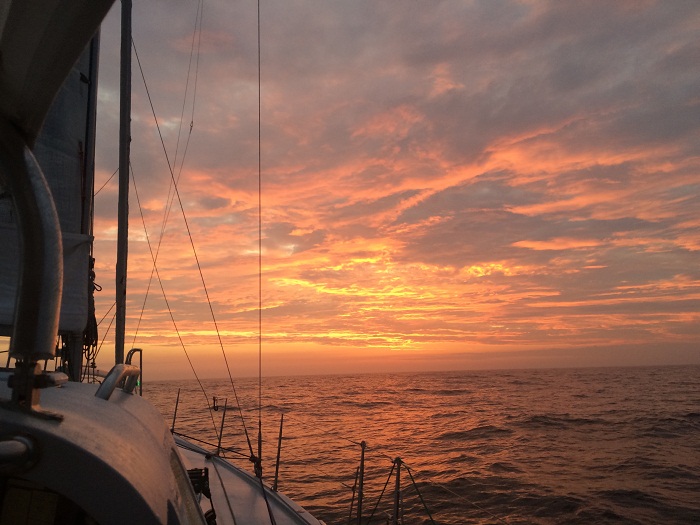 oh, one more thing…  In case you might be wondering if I just recycled one of my sunset pictures (and you know who you are) here’s a shot of Montauk light.  Sorry Rodney,  I don’t have a copy of today’s WS Journal to hold up to prove this photo was taken today so you’ll just have to trust me on this. 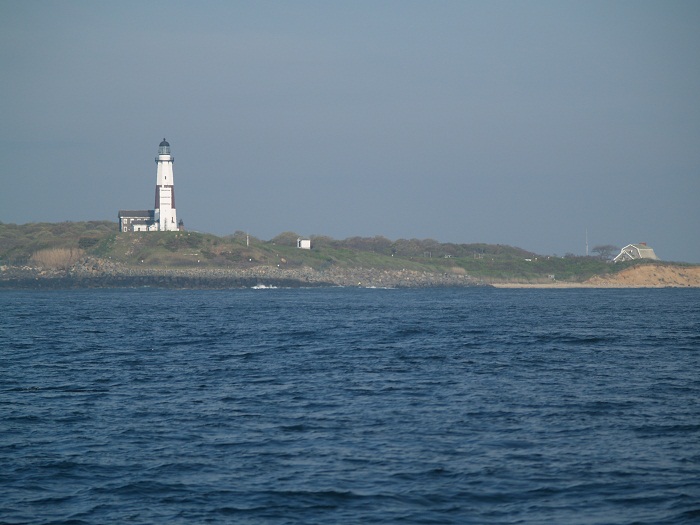 As much as I am looking forward to being home, I fear that the lawn will be in quite a state from my neglect.  And as far as the run home is concerned, when it comes to ocean passages, they aren’t over till mother nature says that they are over.  F-I-N-A-L-Y…  Are we there yet?