Inch by inch, toward Hampton VA.

It’s Wednesday afternoon and we are motoring SLOWLY up the ICW toward Hampton VA.   The scenery here is pretty primeval and there isn’t a home for miles.   However, millions of mosquitoes love it here, a factor that I neglected to prepare for when we went to sleep last night.  The wind died down before dawn and we woke up to dozens , perhaps hundreds, making a feast out of us.  Not a great way to begin the day.  Did I mention that it was 04:00 when we realized that we were not alone?  I was killing the stragglers for hours.  I won’t make the same mistake twice.   Well, not tonight at least. 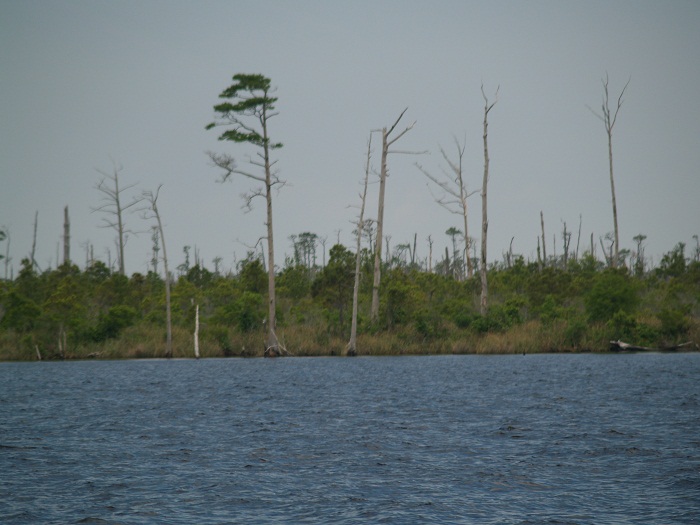 Along the way we are passed by periodically by faster boats in the flotilla of “snow birds” heading north. 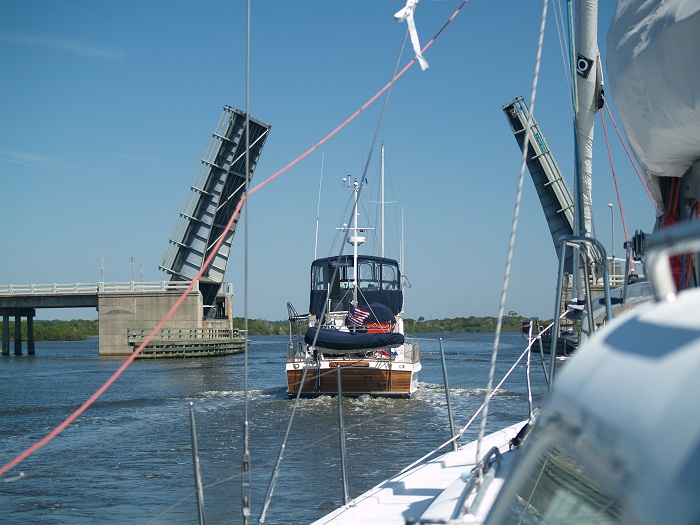 With about two days between us and Hampton, we should be there in time to jump out when the wind shifts back to a more southerly direction, predicted to be as early as Thursday night.  Once the wind shifts we should be able to sail to CT with a good following wind.  Fingers crossed that it works out.  However, if we don’t have enough wind, we will just fire up the “iron wind” and motor the whole way.    We carry plenty of fuel and I will be sure to fill up prior to heading out.

As we cover the miles, a number of fairly minor things have been causing problems.  I expected this as it’s nearly impossible to pick up on all the details in a boat survey, no matter how carefully we went over everything.   For example, the forward macerator pump that empties the holding tank needs to be primed sometimes before it will empty the tank if it isn’t used regularly.  Unfortunately, I didn’t know this so when I tried to use it, I let it run too long and burned out the impeller and pump.  Good news, there was a spare on board.  All better now.

Also, the speedo unit that measures the boat’s speed through the water decided to crap out today.  I noticed that it seemed to be giving some odd readings while we were offshore cor the last few days so I calibrated it to take out the error in the reading, which was clearly not correct.  It seemed to work yesterday but today the unit didn’t work at all and showed a blank screen when I turned everything 0n for the day.

I guess that goes with the territory as this is a complex boat and besides, there are more than a dozen instruments and repeaters on the boat so I suppose that it’s only natural that something will crap out from time to time.  But wait, there’s more.

The owner mentioned that the engine hour readout sometimes doesn’t work  when you first turn on the engine and yet was still counting hours of run time for the motor.  The day of the survey it was working fine.   Alas, it must have been on it’s best behavior as it hasn’t turned on for the last two days.  I guess I should have made a bigger deal about it.  Oh well, hope it doesn’t cost too much to replace.

Well, that covers it for now and I suppose some little “hitches” are to be expected.   I will try not to think about all of those details for now.  The good news is that a lot more is working than isn’t.

On a more positive note, today I noticed that there were some photos on my camera that I had taken over the last week and had forgotten to download.   Just for fun, a few of the more interesting ones.

There is a lot of military air traffic as we worked our way up the waterway with copters and jets nearly constantly in view.  This little helicopter came very close to us.  Jim thought that it was military.  I sure hope that he was wearing his seat-belt. 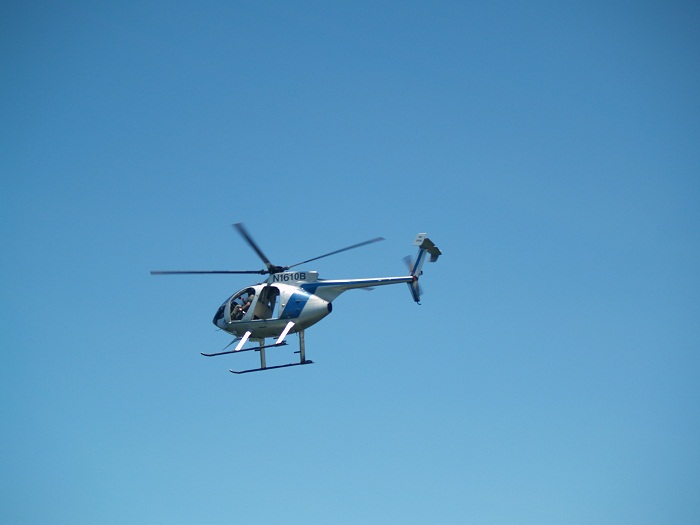 I mentioned in my last post that we caught a tuna.  Here’s a photo of it as it came up to be landed.  Looks pretty big?  Not really but a nice “action” shot, never the less. 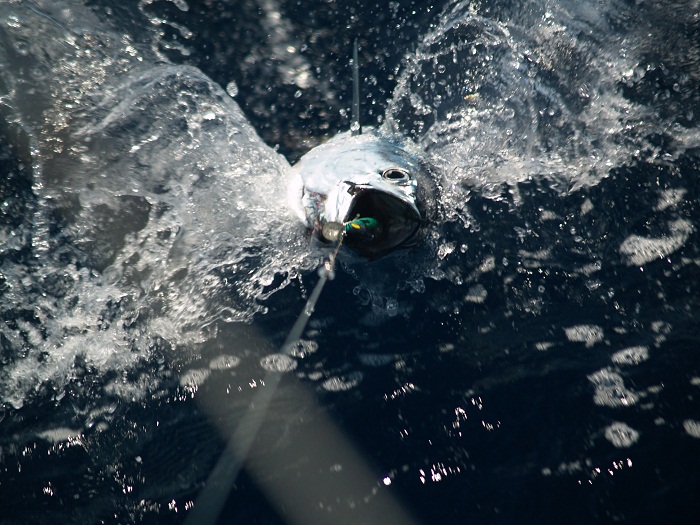 And, I can’t believe that I forgot about our turtle encounter.  We passed quite a few while we were offshore.  This one had a seabird taking a rest on it’s back. 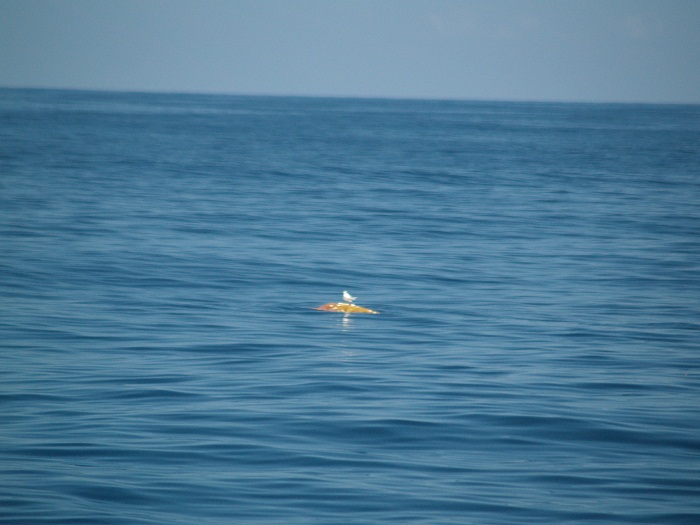 After a bit, he poked his head up to see who was coming by as if to say, “hey you bud, I was sleeping”   I’d guess that this turtle was nearly 4’ across. 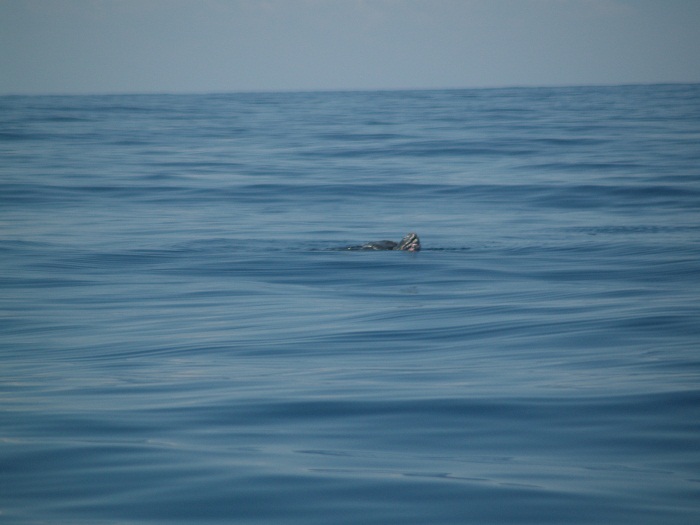 I sure hope that the wind will turn as planned so I won’t have to worry about replacing crew that runs out of “away time”.  Besides, Brenda tells me that the lawn needs to be cut.  It had better not grow much more before I get home next week.

For now, I’ll have to think “grass stunting” thoughts .  Given that our run north seems to be progressing about as fast as “watching grass grow”, I shouldn’t have any trouble with that line of thinking.

So, for now, inching toward Hampton and home.