On our way: St Augustine to Beaufort NC.

It’s Sunday morning early and soon we will drop the mooring, pick up some fuel and water and head out from St Augustine, bound for Beaufort NC, just south of Cape Hatteras some 400NM from here.

I spoke with Chris Parker, the weather router, yesterday and he felt that Ana would be enough out of the way and the seas down enough to make the run on the outside to Beaufort.  He gave me a few way-points for the Gulf Stream to give us a boost in speed and also probably a better wind angle for our run north.

With the wind from the SW, and our course generally NE, the wind will be behind us and I don’t know enough about this boat’s sailing characteristics to be able to predict what time we will arrive at Beaufort Inlet.  However, the ideal arrival time will be Tuesday ,mid-day as the tide is flooding up the river between 09:00 and 15:00.  As they say, “It’s easier to go with the flow, than against it.”

We have to arrive in Beaufort by Tuesday evening as the remains of Ana will head off to the NE and back to sea and will bring northerlies that will make progress beyond Hatteras impossible until the winds shift back to a more southerly direction, perhaps later in the week.

From Beaufort, the run to CT is another 500 miles or so which will take three or four days given good winds.

Anyway, it looks like today will be the day that I get to sail the “new” Pandora for the first time.  Let’s hope that we don’t run into any conditions that are too exciting.  Having said that, we are certainly hoping for a fast passage and with the wind on our tail, we’ll have to have a good amount of wind to make time.

I am optimistic that Pandora will kick up her heels and give us a good run.  If last night’s dramatic sunset is any indication, we should have a good trip. 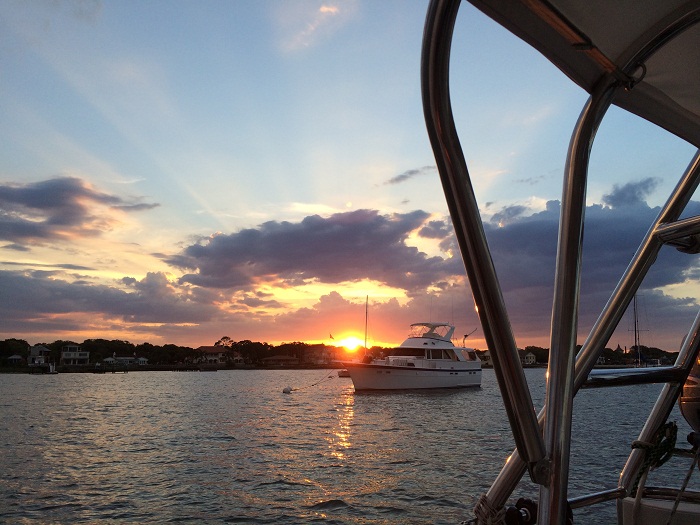 Besides, I know my friend Rodney would be upset If I didn’t put in a sunset photo, so there it is.

There was lots of excitement in St Augustine and I was very touched that the locals put on a parade to see us off.  These nice ladies waved as they passed our “reviewing stand”.   I wonder if they dressed up for us or if that’s the what they wear all the time.   Hmm… 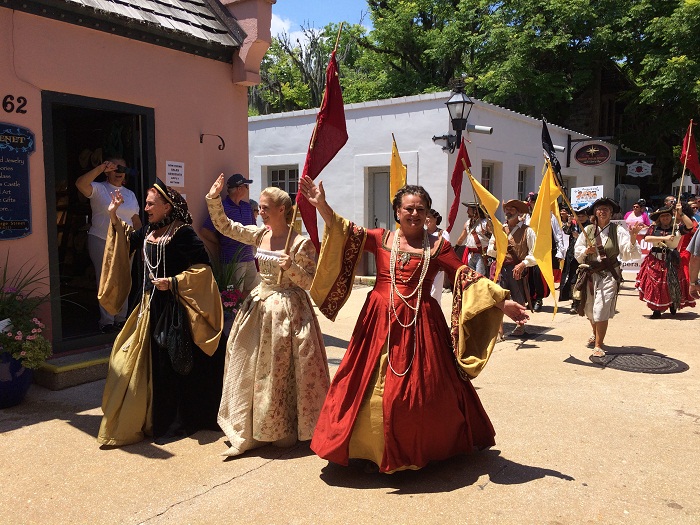 As is our custom aboard Pandora, we’ll be projecting our position every 4 hours with the SPOT GPS, so you will be able to see where we are under “Where’s Pandora”.   Unfortunately, I don’t have my SSB installed yet so I won’t be able to post any more blog entries until I arrive in Beaufort.  So, for now, you’ll have to be satisfied with “spots” on a map, showing our progress as we move north.

One response to “On our way: St Augustine to Beaufort NC.”