It’s Friday morning and we are motoring up the ICW on our way to St Augustine. where we will spend a day or two.  Unfortunately, we are still tied to the ICW as it’s just too rough offshore to make a run out in the ocean.    Things are particularly nasty as you get up toward Hatteras with Ana poking along to the NW at only 1kt, a very slow moving storm indeed.

Here’s what conditions are alike now off off of Cape Fear (Brenda just loves that name). The winds are running 35-50kts from the NW with gusts to 65, nearly Hurricane strength and it’s kicking up seas to 10-20’ tall.  Big waves.  Not a great spot to hang out.   And, to make matters worse, it’s not clear as to when this will settle down enough to make a run past Hatteras.

However, Chris Parker, the weather router, believes that that we can jump out from northern FL at some point, perhaps as early as the beginning of the week and begin our run outside.  Hopefully Hatteras will be settled by late next week, by the time we pass that area.  After that, 4-5 days to the CT River.  Well, who knows how long it’s going to take.    What a change from the last two years when I was able to make the run the entire way from the Bahamas in a week.

There are a number of spots on the ICW where municipalities make free docks available to visiting boaters and New Smyrna, where we tied up last night, is one of those.  The town is lovely and we enjoyed walking around town to get a bit of exercise last night.  Here’s Pandora tied up to the free dock and a floating one at that.  Notice the davits holding up the dink.  That’s the work that was done last week.  I really like how they turned out.  The yard did a great job.  The new logo of the name looks great but it doesn’t show up quite as well as I had hoped on the dark green hull.  Oh well, I am not doing it again.  At least it’s subtle. 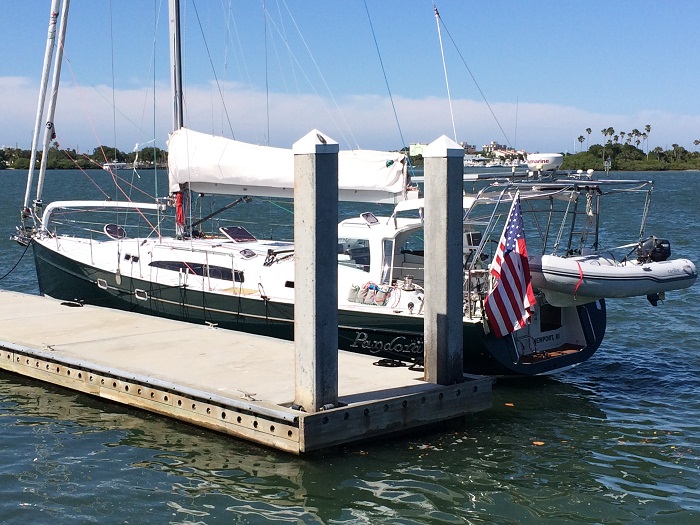 This boat has all sorts of electronics and one that is particularly intriguing is satellite weather.   I had some problems getting it to work as it seems that I didn’t do a very good job of reattaching the antennas that I had removed from the arch when the welding was done.  However, today, after a few days of tinkering with the antenna (first I had to figure out which of the 5 was the right one) it’s working again.  This service shows weather for the entire eastern seaboard in real time.   It includes rain, waves, wind, lightning strikes (Brenda will particularly enjoy watching that) and a bunch of other data to help us understand what’s going on with the weather ahead of us when we are offshore.   As I have not yet installed my SSB radio, having this service is particularly useful.  This screen shot, cockpit reflections and all, shows how much information it has on the screen.  Very cool. 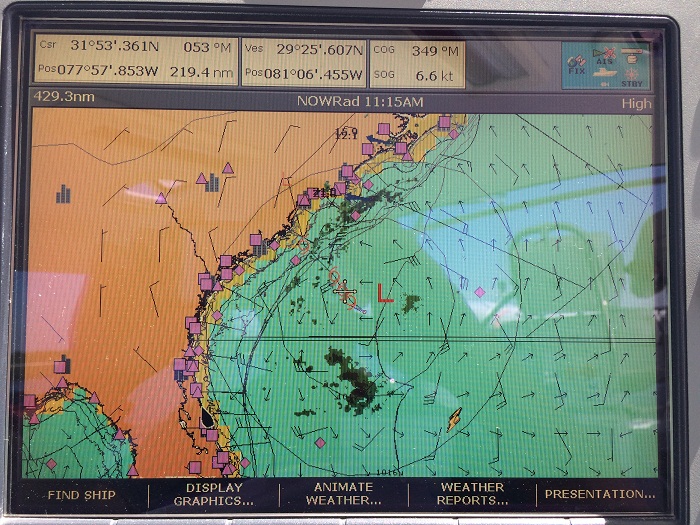 Anyway, while the “where” we are going is not a question (Connecticut) there’s plenty of doubt about the “when”.  I guess it all comes down to Ana and what she has in mind.  So far, she’s proving to be in no particular rush to get out of the way.  “Ana!  Get a move on. “  I don’t think she is listening.  Women…