The “new” Pandora. Getting settled.

It’s Sunday morning and I am here in Ft Pierce aboard the “new” Pandora.  With “Pandora” up in New Bern and under the care of the broker, I have turned my attention to Pandora (soon to be renamed from Ariel) and getting her ready for the run north to begin around May 4th or so.  With crew arriving on the 3rd, I have about a week to get coast guard documentation, ownership fully transfered and become familiar with the boat prior to heading out. There are also some modifications and repairs needed to get everything in order.

The survey went quite well but a few items did show up that need attention.  In particular, the muffler, that was inexplicably made of aluminum, had corroded badly and was leaking.  Hoping that I could stabilize it so that I could make more permanent repairs when I got home, yesterday I set about opening things up to be able to get an epoxy patch in place.  However, as I went at it with a wire brush, the “hole” opened up to a thumb size and it was painfully clear that more major surgery is needed.  So, I had someone over to take a look and I’ll have a mechanic here on Monday morning to remove the old one.   Getting the old one loose is going to be a major exercise and will require some tools that I don’t have. However, putting the new one in should be pretty straight forward.   Let’s hope that this repair ends up being less than a “boat dollar”.  Fingers, and toes, crossed.

I am also having a set of davits put on as I want a way to get the dink out of the water and as an added bonus, I’ll then have a spot to put an additional 300 watts of solar, on top of the 340 watts it already has, which I hope will obviate the need to run my little Honda generator to keep the batteries up to snuff.   The boat has quite a large electrical load.  And, speaking of “boat dollars”, that will certainly add up to a few.

Another issue that came up was with the bottom paint.  The owner had been dutifully getting the bottom painted each year, having it sanded and a new coat of fresh paint applied.  However, as I had painfully discovered myself, too much buildup of an ablative bottom paint leads to adhesion problems as the paint gets thicker over the years.  After a while, the paint will peel badly and that’s exactly what it is doing here.  What is really needed is a full strip of the paint and a fresh start.

Oh well, I guess I should expect to have a lot of work to do in the first year.  Perhaps I’ll just haul it in CT and plan on devoting a bit of time to making it (mostly) right.  I don’t think I have the stamina to take all of the paint off this summer but certainly some touch up and fairing is in order.  Time to sweat, I guess.

I won’t think about that right now.  Perhaps better to focus on what works and to enjoy the view.  Happily, all of the stuff from “Pandora” was swallowed up handily aboard so it’s now fairly livable.  I think that there is perhaps three times the storage on this boat.  However, oddly, we seem to be short on coffee cups, as I can only find three.  Good thing there will only be three aboard for the run north.  As the owner left all of their dishes and anything that was color-coordinated with the boat (can you say green?), we now have all of their dishes as well as those that we moved and let me tell, you there are a lot of dishes.

Happily, everything is now stowed (I expect that Brenda will have something to say about what I put where…) and I can enjoy the view.

Indulge me while I provide a tour of the boat…

Here’s the main salon looking forward.  It’s cavernous compared to our last boat as she is 14.5′ wide verses 12 for “Pandora”.  You wouldn’t think that the extra 2.5′ would make that much difference, but it does. 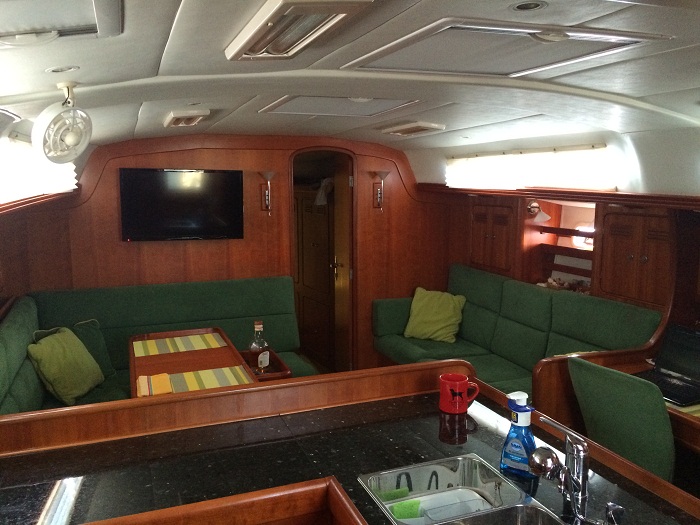 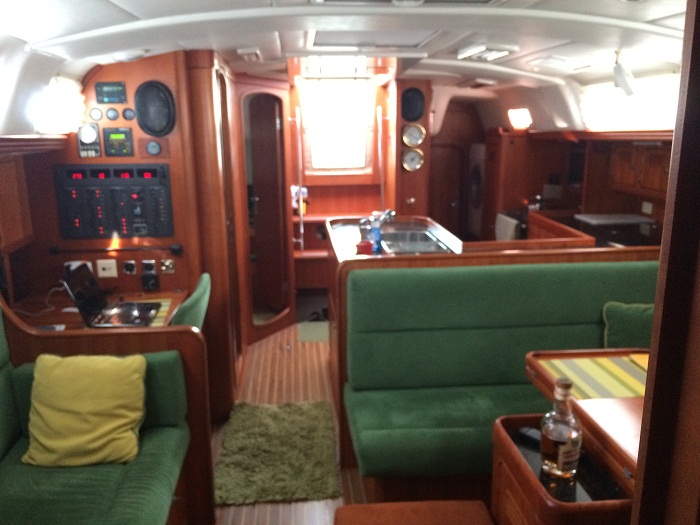 There’s a very nice nav station with a proper seat that swings out.    And, there is even room for my sideband radio. 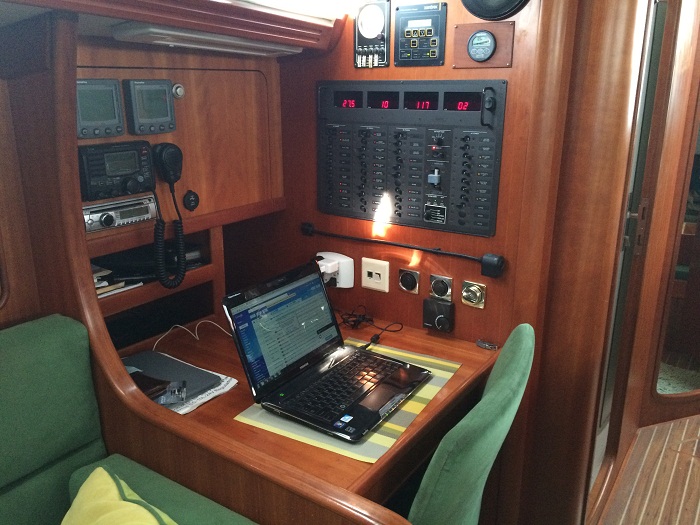 The galley is really nice with granite counter tops.  Interestingly, they are granite
“veneer” over a honeycomb base, the sort used on luxury aircraft and they are very light weight.  Notice the washer in back.  I think it can be used with the inverter for washing but certainly not for drying when we aren’t on shore power as the house batteries total over 100 AH.   Brenda’s pretty excited about that, the washer, not the batteries, that is. 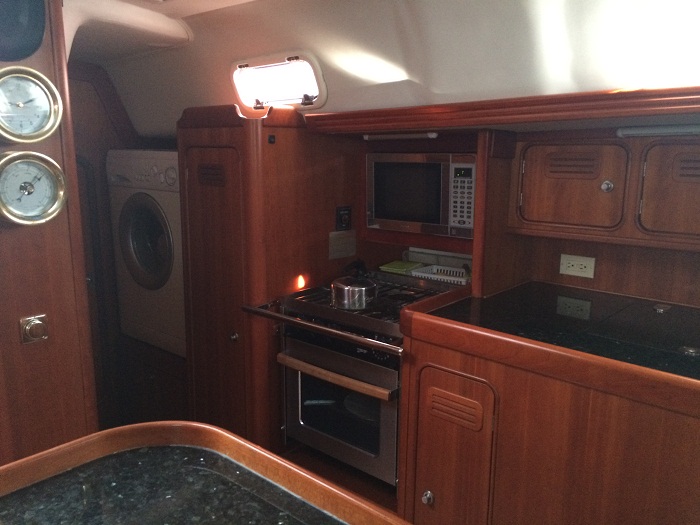 The aft cabin is at the bottom of the companionway to starboard.  Here’s the entrance to the cabin. 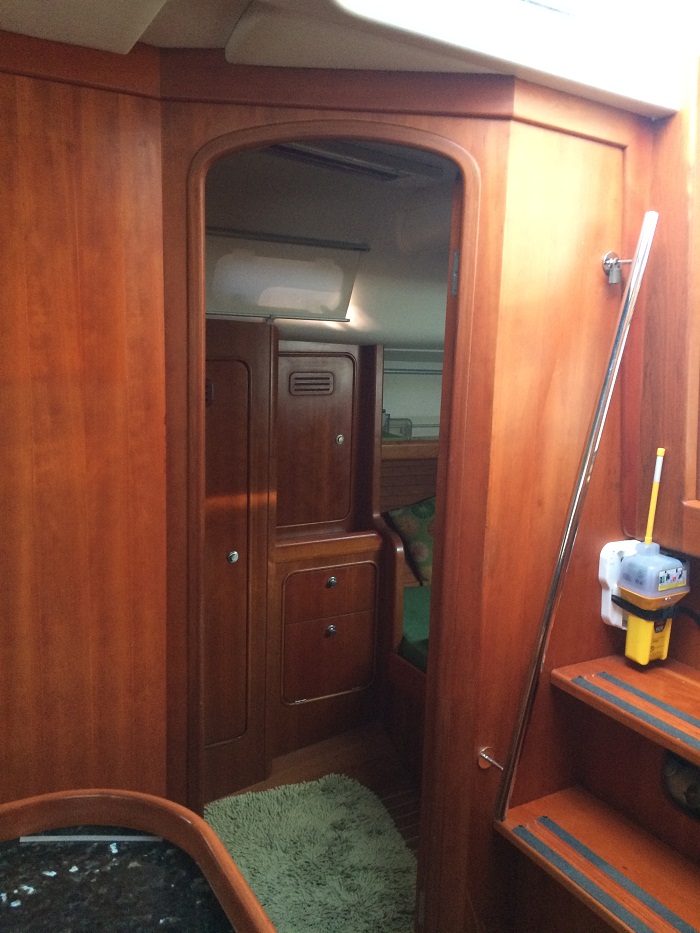 The aft cabin is quite large and has loads of storage under the bunk as well as drawers and a generous hanging locker, one of five on board.  “Pandora” had only one. 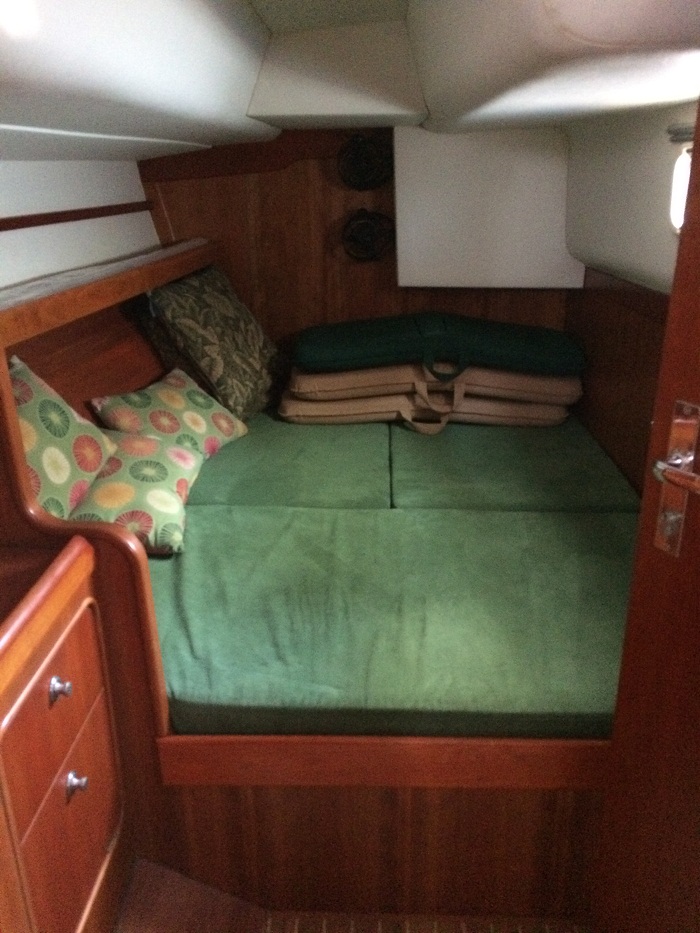 The forward cabin, the one that Brenda and I will use, has loads of storage and the bunk is a bit larger. 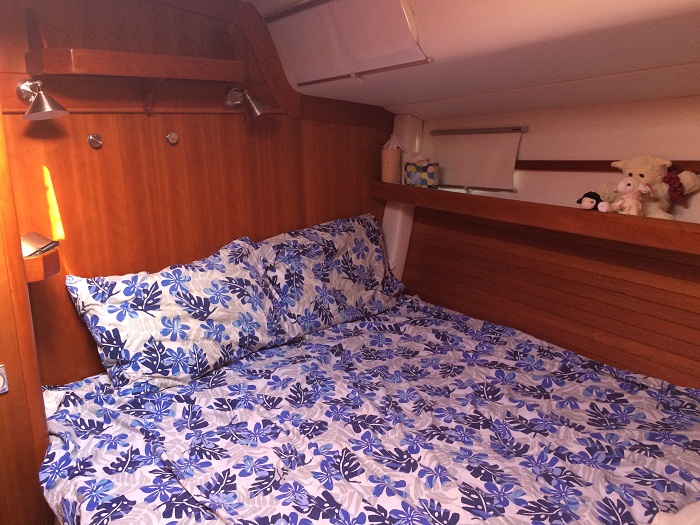 And, believe it or not, there is even a small workshop that has storage to swallow up a huge amount of stuff.  The owner was fastidious about keeping spares on board and there appears to be a backup for nearly every pump etc, aboard. That’s encouraging.  Yesterday I went through everything to get a feel for what was there.  The amount of stuff is a bit overwhelming but will certainly come in handy at some point.  Alas, no spare muffler… 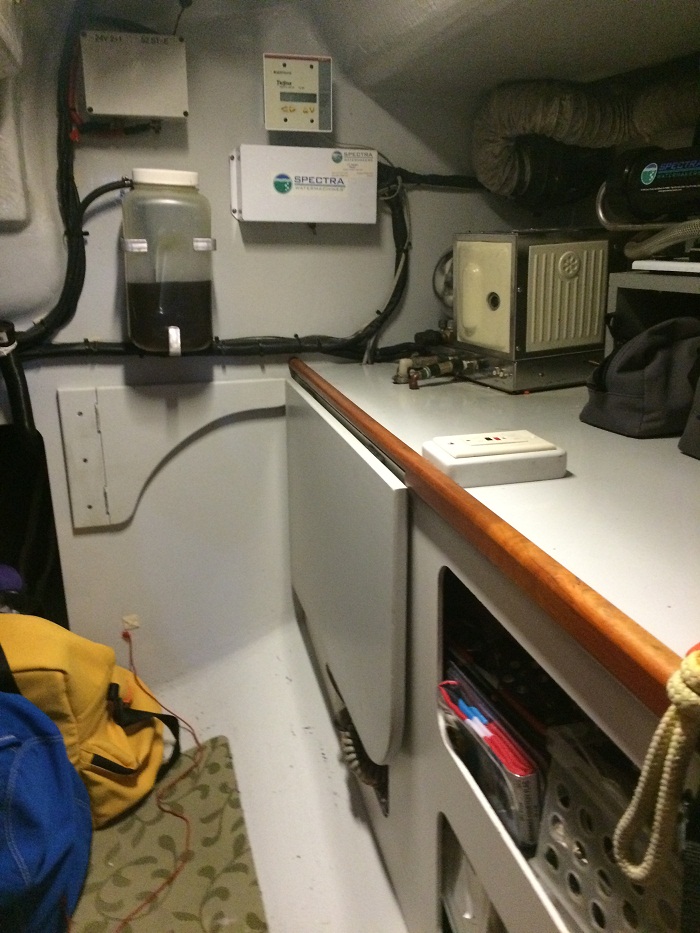 And, last but not least, the hard dodger is wonderful and long enough to lay down out of the weather.   It’s a great spot to tuck up in when the going gets rough.  There’s even a remote plotter so you don’t have to stand at the helm to monitor where you are and a remote for the autopilot. 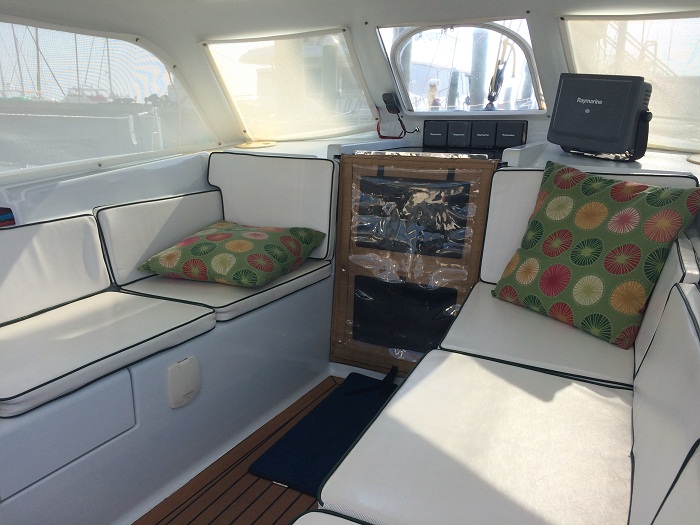 There are instruments for everything at the helm and repeater instruments under the dodger, at the nav station and there’s even a repeater in the master cabin.  I can’t imagine the complexity of all of this.

I guess it’s a good thing that I have a week to sort through everything as I am going to need every moment to get a handle on all of the systems.

Well, the real fun will begin on Monday when we wrestle the old muffler out and order a new one.  Let’s hope that this is the worst “wart” what I discover as I become familiar with the systems. I am certainly happy to be following a fastidious owner who did his best to keep things in proper order.

6 responses to “The “new” Pandora. Getting settled.”