It’s Monday morning and Pandora’s secure on the dock in New Bern NC at the New Bern Grand marina.  It’s hard to believe that we are here after months of saying “we are headed to New Bern…” 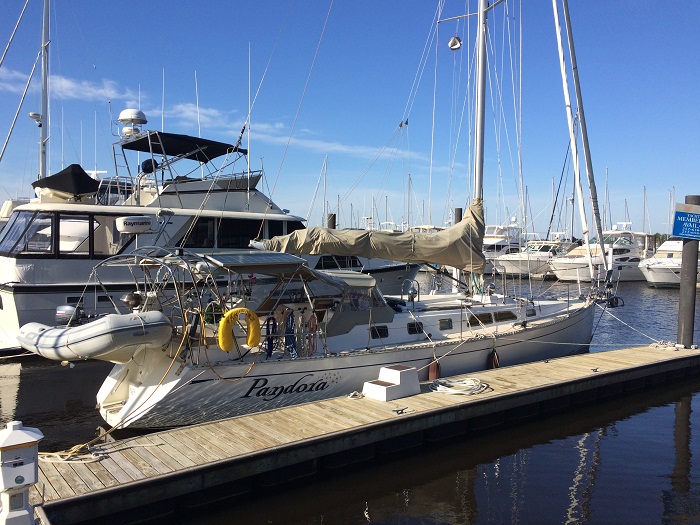 Well, we’re here, on the dock and it’s time to act.  So, yesterday we began what will take us much of the rest of the week, the unraveling of 8 years of our life aboard Pandora.  It’s hard to believe that after all this time we are finally doing it.  We are selling Pandora.

However, all is not lost as we will, in less than two weeks, be taking delivery on the “new” Pandora, the Aerodyne 47 that I have written about in past posts.   I won’t belabor this except to if you have somehow missed my incessant ramblings on the subject, you can see a post that I did a while back about the new boat.

I can’t recall if I already posted this photo, but the boat, now Ariel, soon to be Pandora, was photographed in the Bahamas a few weeks ago by a friend. 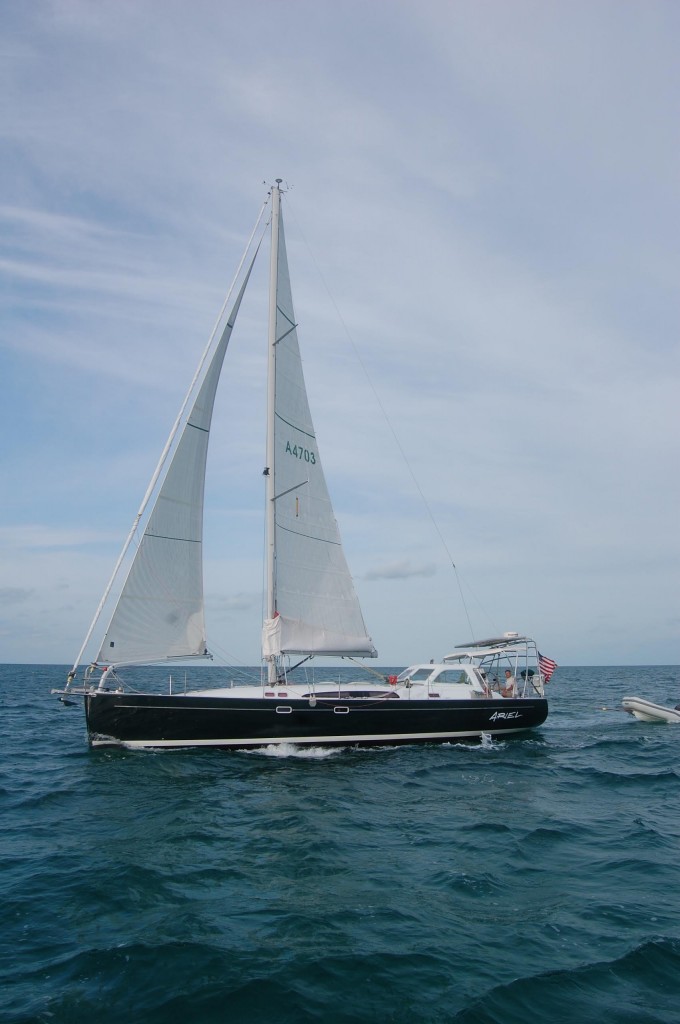 We made great progress yesterday as we began removing personal items and a lot of “stuff” that has accumulated over the years.  We have not yet gotten to some of the areas that are really deeply buried and I expect that we will find some surprises.  I am fearful that I will finally locate the bag of dry cat food we brought aboard three years ago to feed tropical fish in the Bahamas.  I have searched and searched and have never been able to locate it.  Here fishy fishy…

It’s going to take lots of boxes to get all the stuff into our rental car so we made a run to to pick up some up at the local liquor store.  We thought that we had plenty.  Not even close .  Now things weren’t quite as neat and tidy as is normally the case aboard Pandora. 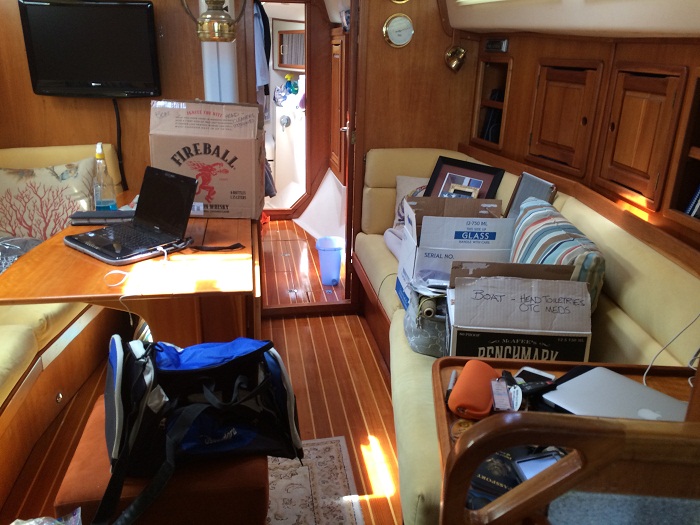 The aft cabin has really gotten out of control.  While I consider myself to a pretty tidy guy, Brenda disagrees and has labeled me a “closet messy”.  Perhaps the aft cabin is often a bit cluttered but this is over the top.   And, that’s not even the half of it. 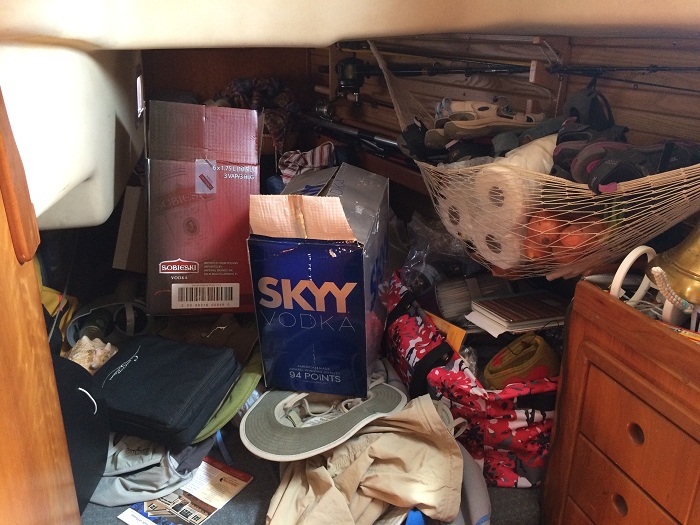 A small amount, so far, spilled out onto the dock.  Off to the van we rented.  And, this is only the beginning.  Hope it all fits. 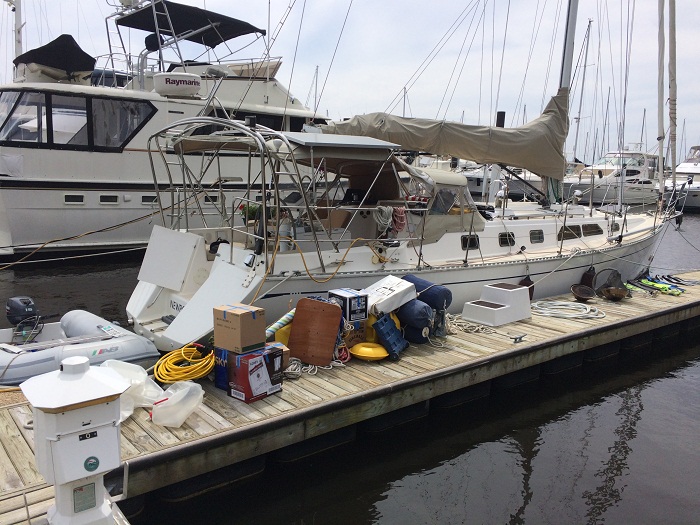 After a long day of unpacking and cleaning we decided to take a walk in New Bern last evening.  What a beautiful city.  This is the city hall building and it’s still in use.  Great brick work. 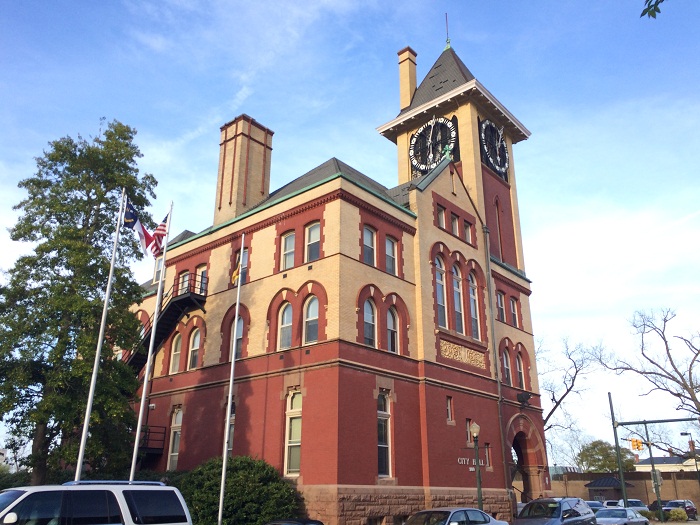 We also visited a local landmark, Tryon Palace once the home to the Colonial Governor prior to the revolution.   What a spot. It was the first constructed in 1770 but was destroyed by fire less than 20 years later.  A major fund raising initiative was conducted in New Bern and the grounds and buildings were rebuilt in the 1950s. 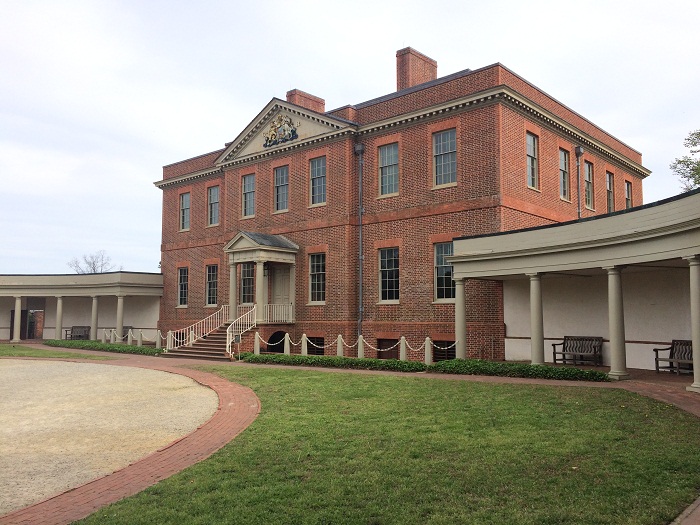 The locals are quite proud of this museum and work hard to keep everything in top shape.  The compound has some terrific buildings. 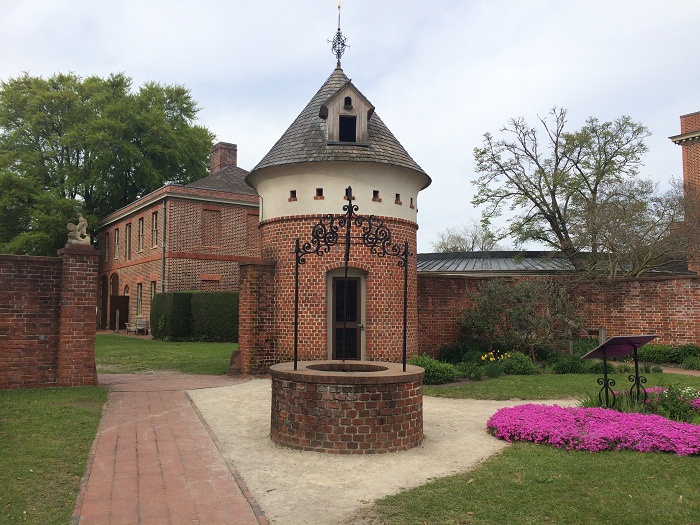 This is a favorite spot for weddings and we had to work hard to stay out of the way of three, count em three, brides having pictures taken. 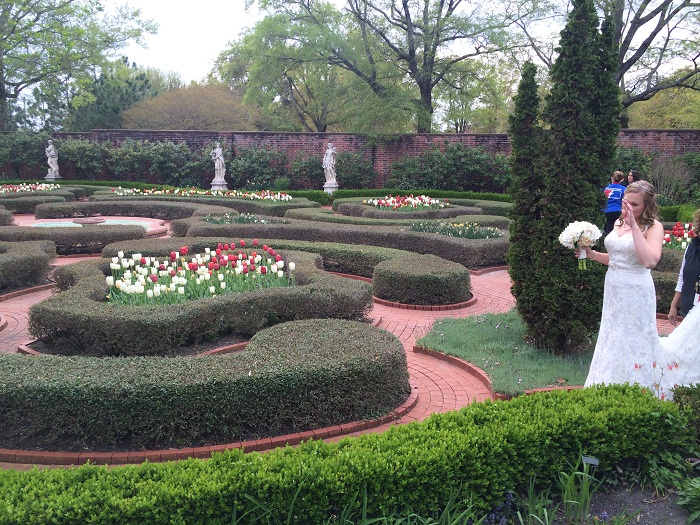 The azaleas are in full bloom as is much everything else.   The Pollen count is sky high.  It’s on everything, coating yellow everywhere including my nose. Yuck… 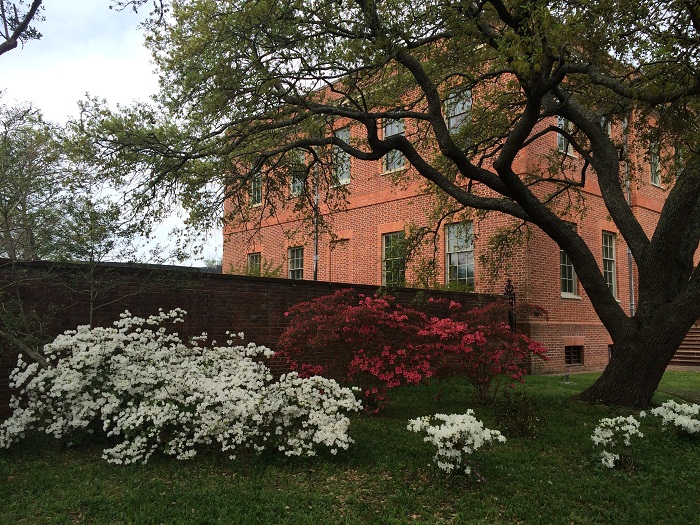 The gardens are spectacular.  How about a espaliered apple tree. 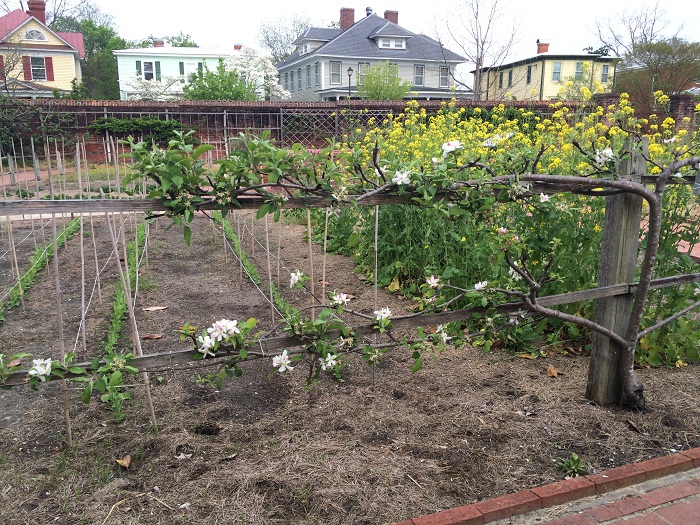 They must have someone on staff that loves trimming hedges as they are everywhere and in perfect shape. 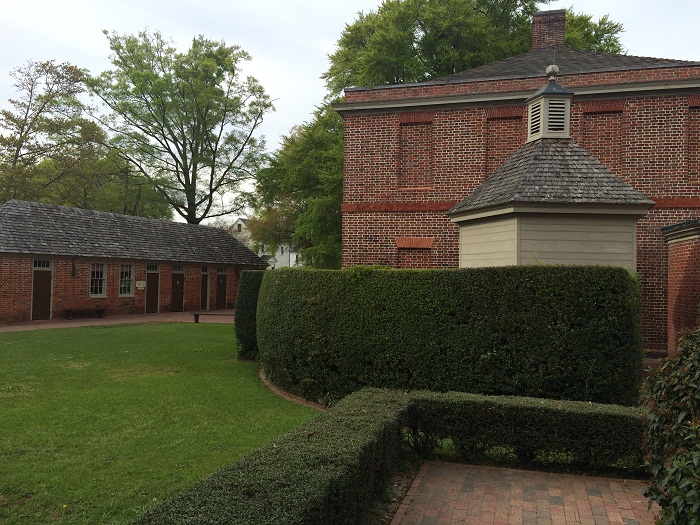 The gardens go on and on…  At home gardens are my problem.  “Bob, wouldn’t it be great if we had a garden here?  Grass is just so boring.”   No, I’ll just stand and enjoy someone else’s work right now. 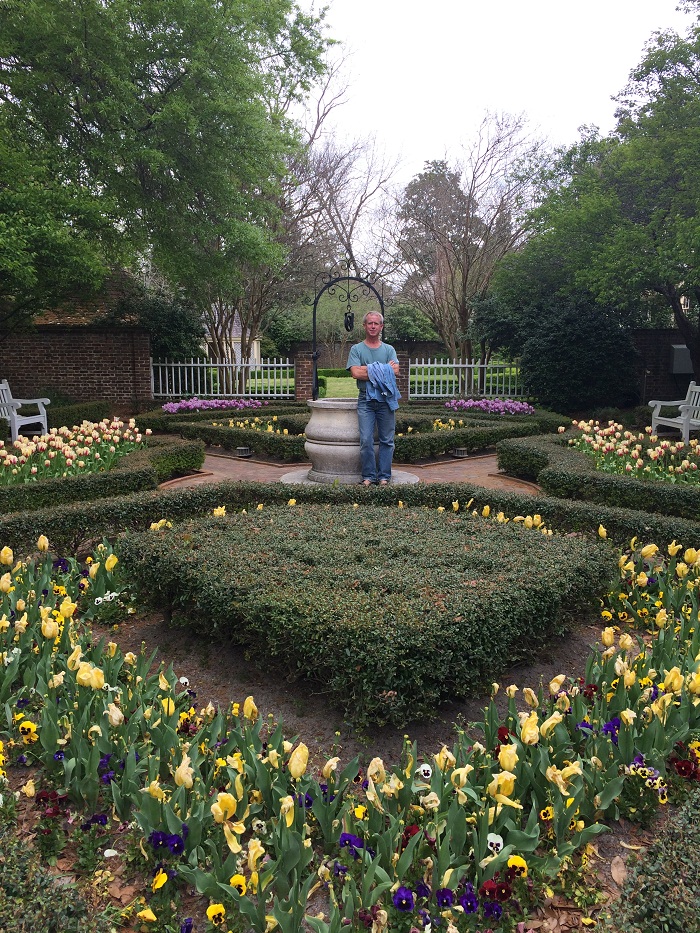 Fig trees.  Bummer that the fruit wasn’t ripe.  I’d have been tempted to snag a sample. 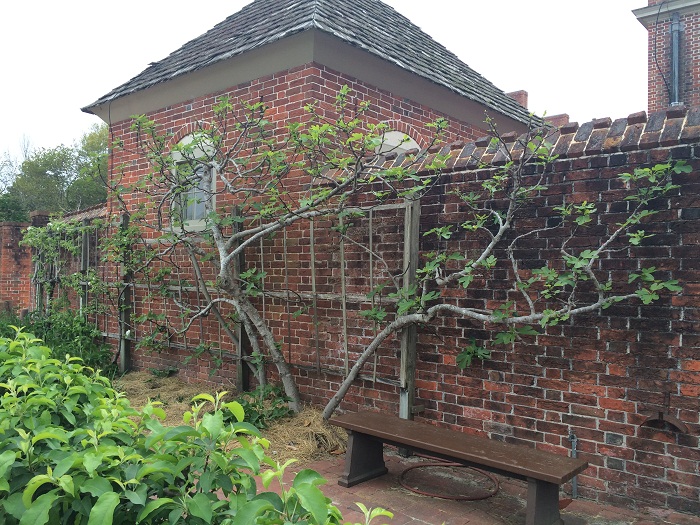 After garden overload we walked around town.  Brenda loved this rose bush. 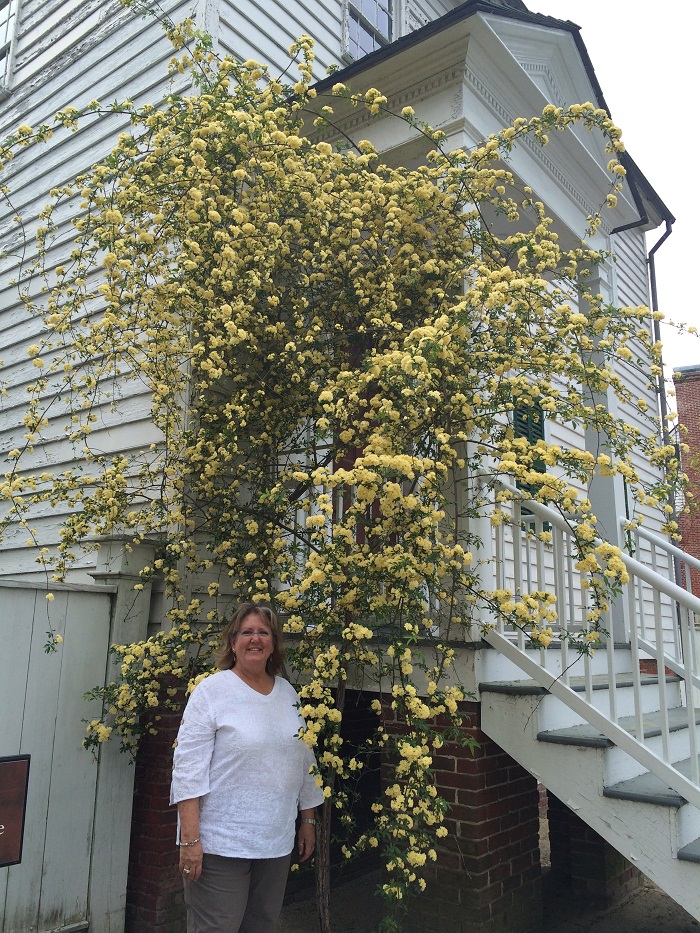 Wisteria is growing everywhere along the roadside.  However, it’s at it’s best when someone keeps tab on things like on this arbor. 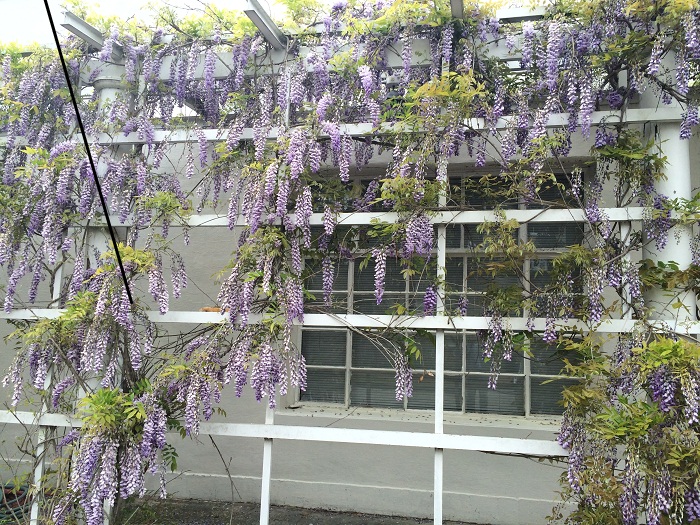 Well, enough about fun, all this blogging isn’t getting Pandora unraveled.   I guess I need coffee to face that.

One response to “Pandora’s “Grand” unraveling.”